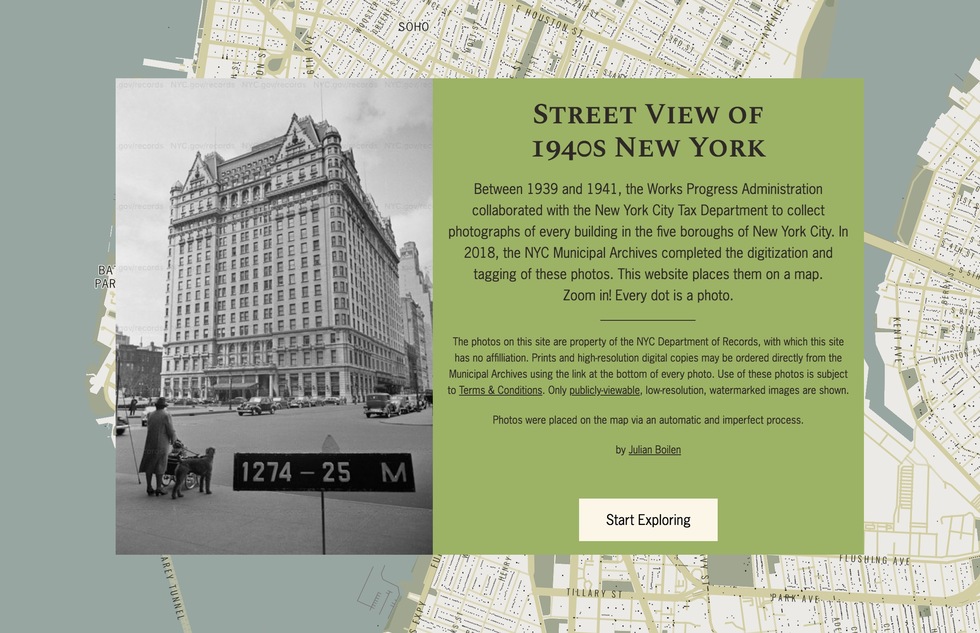 This Interactive Street-View Map Shows What NYC Looked Like, Circa 1940

To visit New York right now, travelers from 33 U.S. states are supposed to self-quarantine for 14 days upon arrival. We can’t blame you if that discourages you from planning a Manhattan getaway for the time being.

Fortunately, there’s a cool new way to explore New York City virtually—and to travel back in time while you’re at it.

Software engineer Julian Boilen has developed an exhaustive, interactive, and addictive street-view map of all five boroughs, circa 1940.

At the website Boilen created, you can either enter an address in the search bar or zoom in on a city map and click one of the black dots peppering the graphic, and you’ll be taken to a black-and-white street-level view of that spot, captured by government photographers between 1939 and 1941. 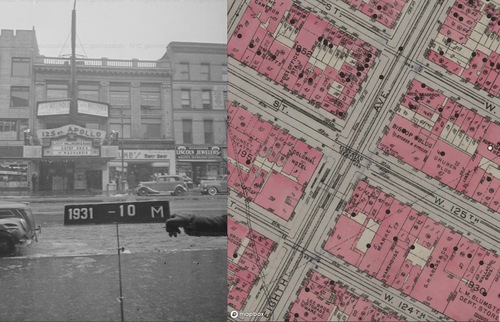 The images—684,728 of them, according to Boilen—were gathered by the federal Works Progress Administration and the New York City Department of Taxation in an effort to photograph every building in the city to help improve property value assessments.

“This is an amazing collection of photos,” Boilen told us in an email. “The Municipal Archives did an excellent job digitizing them, which was a massive project. They also went through the painstaking work of going back to old maps to find addresses for each photo.”

But finding specific locations in the city’s archives isn’t always easy. For one thing, buildings and even entire streets disappear over time. And the images aren’t categorized by modern street addresses—you have to look up the borough-block-lot number on a tax map before scouring the archives.

“It seemed obvious,” Boilen says, “there should be a way to browse around freely by putting [the photos] on a map.”

To get that done took two years of on-and-off tinkering, according to Boilen, a New York transplant originally from Maryland.

“It took a lot of work to just get Manhattan looking decent,” he says, “but once the automation was polished and able to run through all photos without incident, I was able to add the other four boroughs just last weekend.”

He incorporated data from Google Maps, the NYC Department of City Planning, and a 1930 tax atlas to create the final product.

“It's not perfect enough for research,” Boilen says of the map, “but it's pretty good.”

We’d call that an understatement for a project that brings the past so vividly to life. 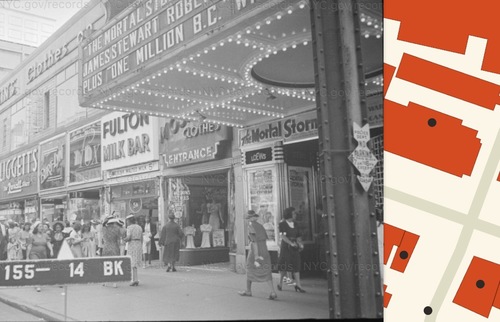 As Boilen puts it, “There are so many stories in these photos: the hustle and bustle in Bryant Park and Times Square, or the rural houses in deep Brooklyn. In the photo of my own apartment, my landlord recognized some of his uncles standing out front of their candy store.”

“I also love the dapper tax guys and their hats who sometimes wind up in the frame,” he adds.

For travelers, the map supplies yet another good reason to visit New York again (or for the first time) someday. Aren’t you curious to see how things have changed?

For a bird's-eye view of the same cityscape over the decades, check out the maps at NYC Then & Now, where you can search by address for aerial images dating as far back as the 1920s.