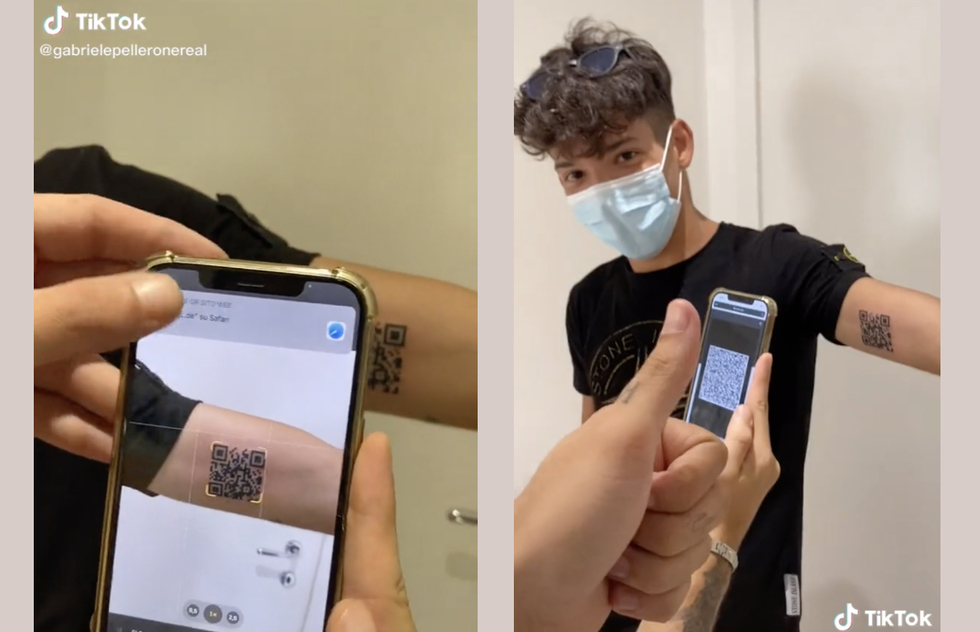 WATCH: Italian Guy Gets Tattoo of His Vaccine Pass—and It Works

Most of us would like to forget about the Covid-19 pandemic as soon as possible. But a guy in Italy has opted for a permanent souvenir.

According to Newsweek, 22-year-old economics student Andrea Colonnetta from Reggio Calabria in southern Italy got a tattoo on his arm of the QR code from his "digital green pass" confirming that he's fully vaccinated.

Since August 6, Italy has required everybody over age 12—that includes tourists—to present a scannable green pass QR code in order to enter restaurants, museums, performance venues, train stations, and pretty much any other public place.

The code may be shown in digital form (on smartphones, for example) or on paper. The official regulation does not list skin as an acceptable medium.

Before any conspiracy-minded foes of vaccine passports fly into a fury, we should make it clear that Colonnetta got inked on his own initiative and not because he was coerced by a government, microchip manufacturer, D.C. pizzeria, Bill Gates, the Illuminati, or the Cobra organization from G.I. Joe (then again, isn't that what they'd like you to think?).

"I wanted to represent the difficulties of the moment through a tattoo that will remain indelible and will represent a historical period of my existence," Colonnetta told the Corriere della Sera newspaper.

He also said his father wished the young man had given the decision more thought, thus summarizing the viewpoint of everyone in the world born before 1999.

And speaking of Gen Z, yes, of course the application and testing of the tattoo were documented on TikTok.

Tattoo artist Gabriele Pellerone posted a series of videos to the platform showing him inking Colonnetta's left arm (caution: needles) and successfully scanning the finished product with a cell phone.

But would the QR code tattoo work to gain entry to an honest-to-goodness business?

That question is answered in another clip, in which Pellerone and Colonnetta are shown at a McDonald's, where a security guard completes a scan of the tattoo before allowing Colonnetta access to the fries and cheeseburgers within.

Mind you, once Italy decides when green passes expire—Austria and Croatia recently announced that vaccinations will be considered no longer valid after about 9 months—Colonnetta's tattoo risks becoming merely decorative. But for now: It works!