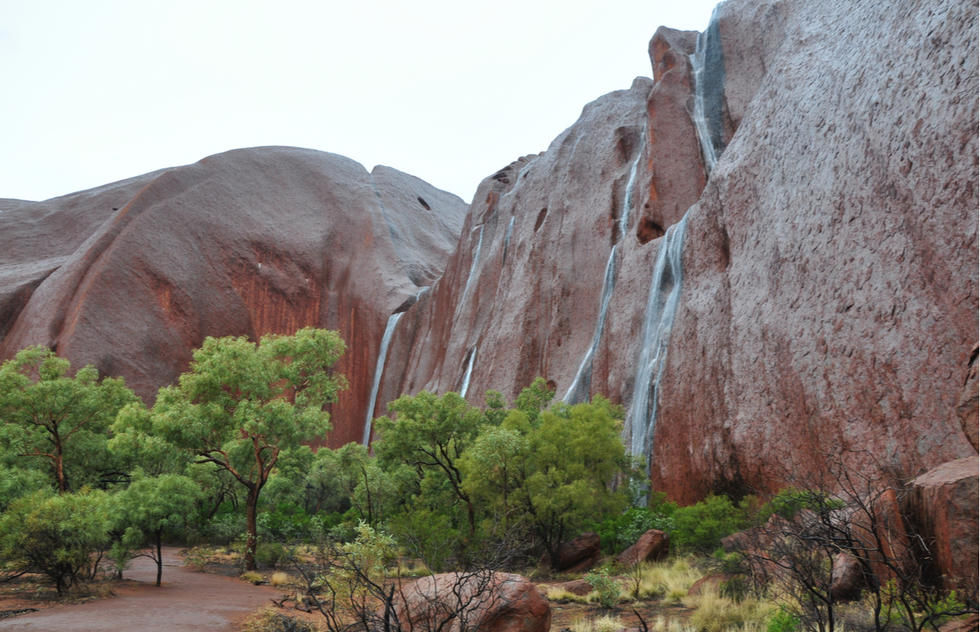 Visitors at Uluru in Australia's Northern Territory got a rare treat this week: the sight of waterfalls tumbling over the surface of the red sandstone monolith.

That only happens when there's a lot of sudden rain in the region—and since this area, part of the arid "Red Centre," is one of Australia's driest, the phenomenon doesn't happen often. (The photo above was taken in 2010.)

But earlier this week, the area north of Uluru-Kata Tjuta National Park received more than an inch of rain in 24 hours, according to The Independent. That's a tenth of what the region typically gets in an entire year.

Hence the temporary cascades on Uluru.

Waterfalls at #Uluru! The sacred site received 30mm of rain during the 24 hours to 9am on Monday - its heaviest rain in 3 years. ???? While the Red Centre is typically dry, here are some incredible moments from yesterday shared by: @contiki.cas @eprintdarwin @proud_strong_deadly @belfastbrawn #Weatherzone

Several lucky Instagrammers captured the sight. Click the right arrow button in the embedded Instagram post above to see video taken up close by two photographers.

The Sky News Australia channel took the opportunity to share some spectacular footage of an earlier occurrence of Uluru waterfalls in the early 1970s.

Back then, many people called the formation Ayers Rock, as it was christened in 1873 by explorer William Gosse, who named it after Englishman Henry Ayers, the chief secretary of South Australia at the time.

But the rock had been dubbed Uluru long before by indigenous Anangu peoples, for whom the landmark is sacred.

After a decades-long campaign, Aboriginal inhabitants finally persuaded the Australian government to ban tourists from climbing Uluru in 2019. Frommer's named the site one of the world's Best Places to Go that year for the chance to experience the region's natural beauty and indigenous culture respectfully.

Whenever normal travel resumes, that recommendation will be just as relevant.