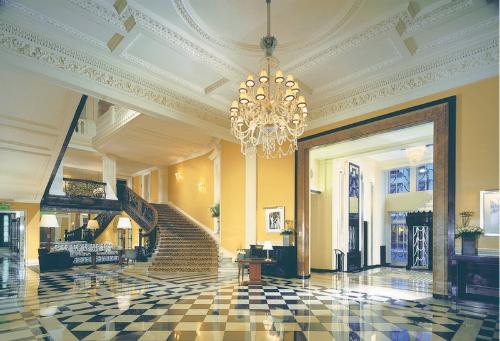 Leave it to the Rolling Stones to find a way to create mayhem in a hotel room even when the hotel is closed.

The just-released music video for the band's latest single, "Scarlet" (which was actually recorded in 1974 with Led Zeppelin's Jimmy Page but is only coming out now), was shot entirely on location at the landmark Claridge's hotel in London.

Temporarily shuttered due to the pandemic, the Mayfair icon won't be accepting overnight guests again until September 7.

While empty, the hotel did allow the video's makers to use the place as an elegant backdrop for the entertaining antics of the 4-minute clip's sole onscreen presence, Irish actor Paul Mescal of Hulu's Normal People. We regret to inform you that, unlike his character on the show, he is not wearing a chain necklace here.

As the Stones song plays, Mescal drunk-dials an ex, scales furniture, argues with a lipstick drawing on a mirror, dances with abandon, and otherwise has a gas, gas, gas (as another Stones song would put it) in a suite, a bathroom, hallways, and common areas of the vacant hotel.

We catch glimpses of the antique elevator, with its banquette seating (though the operator who's usually on duty is absent), as well as the grand staircase and checkered floor in the lobby (pictured above), where a Christmas tree decorated by a different famous designer is a showy centerpiece each yuletide.

In a video chat introducing the clip on Thursday, Mescal told Stones lead singer Mick Jagger, "Due to the pandemic and hotels being closed, the production team could kind of aim big in terms of the location,” adding that “the staff of Claridge’s were amazing.”

“You were obviously having so much fun in this empty hotel,” said Jagger. “I thought you were going to kill yourself when you jumped down the stairwell.”

Mescal's performance is a worthy entrant in the Celebs-Go-Nuts-in-a-Fancy-Hotel genre of music videos.

Past achievements in the field include the Spice Girls romping through London's Grand Midland Hotel (now the St. Pancras Renaissance Hotel), Beyoncé partying at the Beverly Wilshire in Los Angeles, and, our personal favorite, Christopher Walken, on behalf of Fatboy Slim, defying gravity at the L.A. Grand Hotel Downtown.