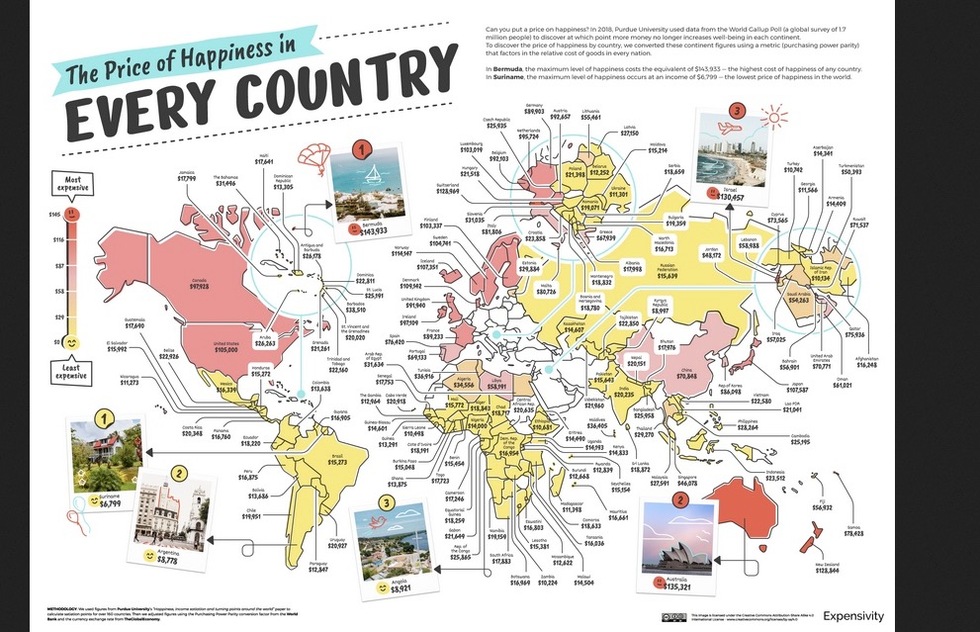 Where Your Income Will Make You Happiest: A Look at Relocation Around the Planet

As more Americans became remote workers over the last year, the travel experience temporarily shifted from vacations to relocations.

People who were fortunate enough to be flexible scratched their travel itch by pulling up roots and trying a new home base. It's one of the reasons behind the popularity of our recent stories about the best small cities in the U.S. for residents, the places where people most wish they could move, and the best places for expats to live.

But those articles only lightly touched upon cost. Which is why I was pleased to find a new study from finance advice site Expensivity on the minimum income necessary to enjoy life—a figure that shifts greatly from country to country.

I think this study, called "Satisfying Salaries," could also help people planning travel for the future, because average local income usually influences the price of restaurants and attractions.

So what is the minimum annual income needed to enjoy life in the United States? According to Expensivity, the range shifts by city, but the nationwide average is $105,000 per year.

Interestingly, that is not the optimal income for the rest of the world—by a long shot. In Bermuda, you'll need even more money to get along. The study finds that an annual income of $143,933 is necessary there to keep a smile on your face—that's nearly 50% higher than in the United States. (To give the comparison a unified metric, all figures are given in U.S. dollars.)

In what country can you have the lowest annual income and still live the good life? That would be Suriname in South America ($6,799 does it). It is followed by Argentina ($8,778) and an array of countries Americans don't tend to visit much, with the exception of Turkey ($10,742).

The picture changes drastically when costs in individual cities are investigated. In that case, the United States comes out priciest, with New York City, not surprisingly, in the top spot ($139,183) and Honolulu in second place ($133,713).

A bit on methodology: Expensivity said it used a paper from Purdue University to calculate satiation points for over 160 countries. Figures were then adjusted using the purchasing power parity (PPP) conversion factor determined by the World Bank.

To see the full study, which lists far more countries than I can do, click here.