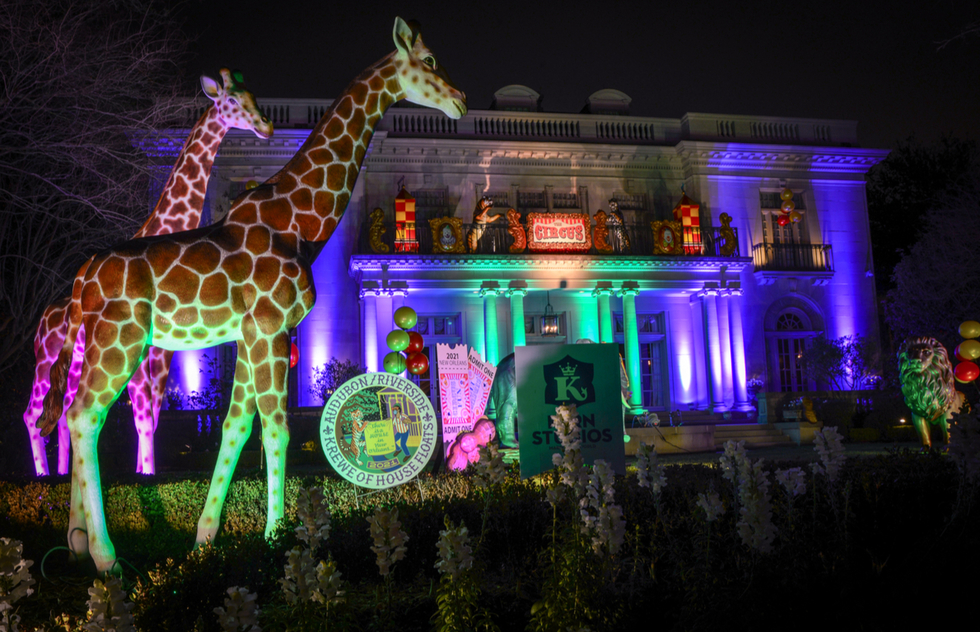 In response to the pandemic, New Orleans has banned the following from the 2021 Mardi Gras celebrations in the days around Tuesday, February 16: parades, bars, to-go drinks, and large gatherings.

But if you think that means the citizenry will spend Fat Tuesday sitting in darkened living rooms and hurling strings of beads at their cats, you underestimate the creativity of this uniquely creative city.

Back in November, when news of the parade-free Covid Carnival became known, NOLA resident Megan Boudreaux started a Facebook group called Krewe of House Floats to encourage friends and neighbors to decorate the outsides of their homes to look like Mardi Gras floats.

The idea took off, soon attracting the attention of the social organizations known as "krewes" that work year-round on the elaborate floats, costumes, music, and dance routines that make Mardi Gras parades so unforgettable.

In conjunction with the Krewe of Red Beans, professional float designer Caroline Thomas founded Hire A Mardi Gras Artist to raise money through charitable donations in order to pay a team of around 40 carpenters, painters, and other creatives so they could transform front yards and porches into colorful and extravagant canvases full of flowers, jesters, birds, and skulls.

There are tributes to frontline workers, cutouts of politicians and celebrities waving from balconies, and salutes to New Orleans musical greats such as Dr. John and Big Freedia.

A post shared by Queen of Bounce House NOLA (@queenofbouncehouse)

The Hire A Mardi Gras Artist decorations don't just adorn stately Garden District mansions, either. Anyone who made a donation to the project, no matter how small, was also entered in a lottery to get a parade-worthy home makeover.

Beyond that charitable effort, plenty of homeowners went the DIY route or hired their own decorators (the circus-themed display at the top of this post graces a mansion in the Uptown neighborhood).

To help celebrants find all the floats in this stationary parade, the Krewe of House Floats website has published a map with hundreds of locations in New Orleans and beyond. Using the navigational tools, you can zoom in to specific areas and see house floats by name, address, and optimal viewing time.

The map even includes house floats submitted by NOLA expats in places outside of Louisiana, from Alaska to Australia.

A post shared by Petite Fleur by Lisa Brooking (@petitefleurbylisabrooking)