Side Trips in Deer Isle 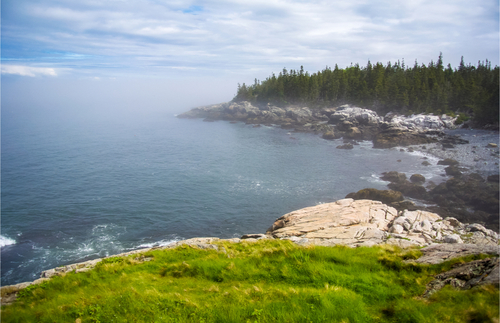 Rocky and remote Isle au Haut offers one of the most unusual hiking and camping experiences in northern New England. This 6.3-mile island, located 6 miles south of Stonington, was originally named Isle Haut (or High Island) in 1604 by French explorer Samuel de Champlain. The name and its pronunciation evolved—today it’s generally pronounced Aisle-a-ho—but the island itself has remained steadfastly unchanged over the centuries.


About half of the island is owned by the National Park Service and maintained as an outpost of Acadia National Park. A 60-passenger ferry from Deer Isle, run by the Isle au Haut Boat Company, makes a stop in the morning and late afternoon at Duck Harbor, allowing for a solid day of hiking while still returning to Stonington by nightfall.
advertisement

Note: The ferry stops at two different landings. Most of the time, they stop at the “town landing”—convenient for groceries, but a 4-mile, 2-hour hike through the island’s woods along the Duck Harbor Trail to the only campsite (see below). During summer, usually twice a day, special boats run directly to the Duck Harbor landing, an easy few minutes’ walk to the sites.

I cannot stress enough: Check first where your ferry is going if you are not ready or able to walk 4 miles twice. The small harborside village, which has a few old homes, a handsome church, and a tiny schoolhouse, post office, and store, is interesting, but campers and most day-trippers are better served ferrying straight to Duck Harbor.
advertisement

At Duck Harbor, the NPS maintains its cluster of five Adirondack-style lean-tos, which are available for overnight camping; cost is $25 per site, and they can be used up to 3 nights in a row (5 nights outside high season). A maximum of six campers can use each site, and there are no showers or electricity; there’s a water pump about 1/3 mile away. These sites fill up fast, and advance reservations are essential (due by April 1 of the year you want to visit, though occasional cancellations merit checking afterward anyway).
advertisement

Contact Acadia National Park, Eagle Lake Road ( tel. 207/288-3338). Other than for camping, the park doesn’t charge a fee to explore its island holdings.


Who lives here? The island is partly inhabited by some fishermen who can trace their island ancestry back 3 centuries, and partly by summer visitors whose forebears discovered the bucolic splendor of Isle au Haut in the 1880s. The summer population of the island is about 300, with about 50 die-hards remaining year-round. (One resident is writer Linda Greenlaw, the former fishing-boat captain profiled in the book and movie The Perfect Storm; she has also written her own book, The Lobster Chronicles, as well as a cookbook of recipes from the island.)
advertisement

You can stroll the only-partly-paved main road that circles the island, but many hardy visitors choose to explore the excellent island trails that penetrate and encircle the isle. Some of the more scenic ones include Western Head Trail (requiring perhaps 1[bf]1/4 hour one-way) and Cliff Trail (about 45 minutes one-way), with expansive cliff and sea views.

The NPS can furnish you with a trail map at the campground, and rangers sometimes ride the ferries. Be careful, however: Some of these trails are rough on the feet, and they can get wet from the sea, fog, or rain; rain, in fact, may render a few (such as Goat Trail) impassable at times.
advertisement

The Isle au Haut Boat Company (tel. 207/367-5193) operates the ferry run, leaving from the pier at the end of Sea Breeze Avenue in Stonington. In summer (roughly mid-June to mid-September), there are three to five daily runs to the island, with four to six runs in spring and fall; call or check the website for exact schedules.

The round-trip boat fare to either the town landing or Duck Harbor is $40 for adults and $20 for children 11 and under. (There’s also a small extra surcharge if you pay by credit card.) Bikes cost $26 round-trip, kayaks $46. The crossing takes about 45 minutes to the village landing, or 1 hour and 15 minutes to Duck Harbor. Reservations are not accepted; it’s best to arrive at least a half-hour before departure.