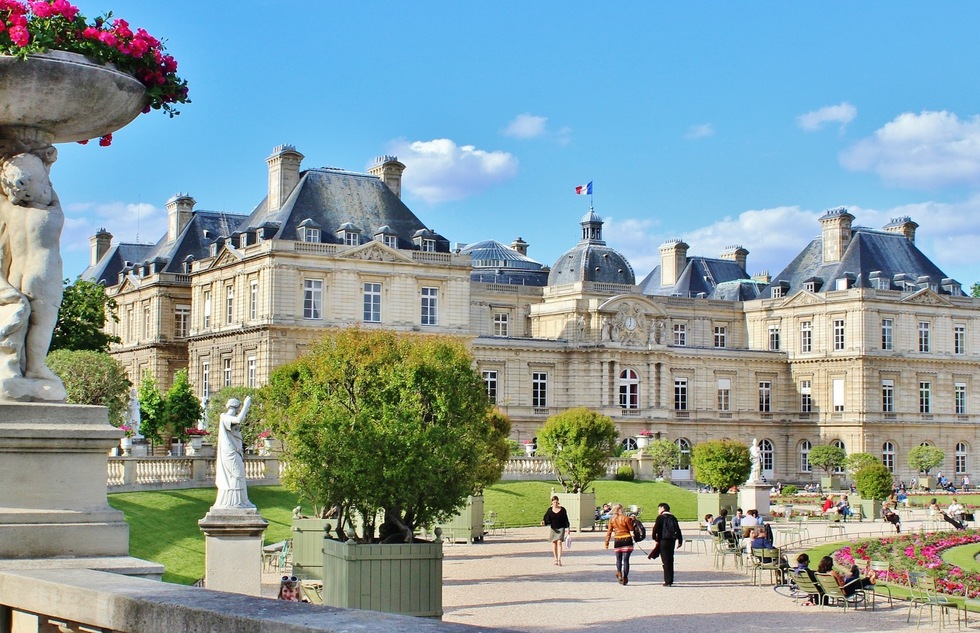 Out of the many parks and gardens in Paris, this is our personal favorite. Rolling out like an Oriental carpet before the Italianate Palais du Luxembourg (the seat of the French Senate since 1958, not open to the public), this vast expanse of fountains, flowers, lush lawns, and shaded glens is the perfect setting for a leisurely stroll, a relaxed picnic, or a serious make-out session, depending on who you’re with. At the center of everything is a fountain with a huge basin, where kids can sail toy wooden sailboats (2.50€ for 30 min.) and adults can sun themselves on the green metal chairs at the pond’s edge. Sculptures abound: At every turn there is a god, goddess, artist, or monarch peering down at you from his or her pedestal—Vulcan, Venus, George Sand, or Anne de Bretagne, to name but a few. The most splendid waterworks is probably the Medici Fountain (most easily reached via the entrance at place Paul Claudel behind the Odéon), draped with lithe Roman gods sculptured by Auguste Ottin, and topped with the Medici coat of arms, in honor of the palace’s first resident, Marie de Medicis.

In 1621, the Italian-born French queen, homesick for the Pitti Palace of her youth, bought up the grounds and existing buildings and had a Pitti-inspired palace built for herself as well as a smaller version of the sumptuous gardens. She relocated here in 1625, only to be banished in 1630 for taking the wrong side against powerful Cardinal Richelieu. The palace passed on to various royals until the Revolution, when it was turned into a prison. American writer Thomas Paine was incarcerated there in 1793 after he fell out of favor with Robespierre; he narrowly escaped execution. On the plus side, the Revolutionaries increased the size of the garden and made it a public institution. The orchards of the neighboring charterhouse were annexed, the remnants of which can still be visited at the southwest corner of the gardens. There, visitors can see a horticulture school where pear trees have been trained into formal, geometric shapes, as well as beehives maintained by a local apiculture association. After the Revolution, the palace and grounds stayed in government hands up until today (the palace houses the French Senate), with the exception of the Orangerie, which now holds the Musée du Luxembourg, 19 rue de Vaugirard, 6th arrond. (www.museeduluxembourg.fr; 01-40-13-62-00; admission and hours vary with exhibits; Métro: Odéon, RER: Luxembourg), which is only open during its excellent temporary exhibits.