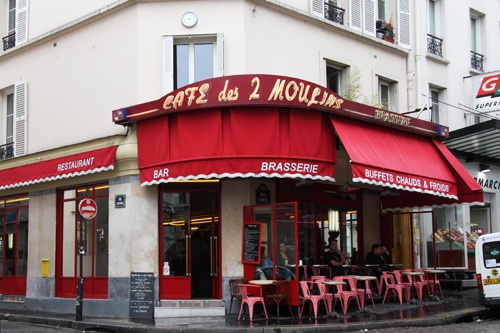 Dining near the Louvre can be expensive and frustrating. Since almost every tourist visiting the city comes to this part of town, it’s rife with overpriced, mediocre tourist restaurants (you can identify them by the fact that they offer menus in at least five languages). However, if you poke around some of the smaller streets away from the museum, you’ll find more authentic eateries.

You should have no trouble finding good things to eat in the Marais. Between its working-class roots and its more recent gentrification, the Marais has a wide range of choices, from humble falafel joints to trendy brasseries. Unlike the shops here, which have become so hip it hurts, a good selection of midrange restaurants still attracts both the sleek set and just regular folks.

Mobbed with tourists, oozing with opulence, the Champs-Élysées is a difficult place to find a good meal unless you are willing to spend a lot of money. Mediocre chain restaurants abound on the grand avenue itself; kebab joints mingle with frighteningly expensive gourmet palaces on the surrounding side streets. Many two- and three-Michelin star restaurants are here too; before you splurge on a dinner table, remember that lunch in one of these same eateries often costs half the price.

Buzzing with cafes and theaters in the 19th century, the long-overlooked Grands Boulevards are finally coming back to life, especially where these wide avenues intersect with the Opéra and the hip and happening part of the 9th arrondissement that borders Montmartre, nicknamed SoPi (as in South of Pigalle). Less trendy, but also less expensive, the little streets around the Bourse (the French stock exchange) have a wide range of restaurant options, especially at lunchtime. The covered passages that crisscross parts of the 2nd arrondissement, especially Passage des Panoramas, also harbor some excellent dining options.

When you get away from the tourist traps of Place du Tertre, you start to understand why people love this neighborhood, and why it’s become a favorite with the arty-hipster set. To the north and west of the basilica is where you will find the villagey atmosphere you’ve heard so much about; to the east and south, Montmartre gives way to Barbès, a lively immigrant neighborhood where you are just as likely to see women donning headscarves and African prints as smart Parisian apparel. Either way, you’re bound to come across good food.

With a mix of working-class families, hipsters, and bobos (bourgeois bohemians), the area between République and Nation is diverse, young, and fun. It’s also one of the most exciting places for food right now, with a plethora of young chefs opening restaurants that Parisians cross the city for.

Between the two parks of Belleville and Buttes Chaumont and along the Canal St-Martin lie some of the city’s most quirky and delightful restaurants. In one of the last strongholds of Paris’ bohemian set, you can find both gourmet bistros and funky cheap eats, as well as a good number of wine bars that serve nibbles along with the fruit of the vine. One Thursday evening every month boulevard de Belleville morphs into a street food market where around 20 stands sell everything from Vietnamese bò bún (a beef and noodle salad) to Mexican street tacos.

For more than 700 years, this lively neighborhood has been overrun with students, a population that is forever on the lookout for a good, cheap meal. As a result, the area is full of inexpensive snack shacks of varying quality, from souvlaki huts to Vietnamese noodle shops to Breton crêperies. Steer clear of the unbearably touristy area around rue de la Huchette, where you are bound to pay too much for a mediocre product, and be wary of rue Moufftard, which was once a good bet for good food but has since become a victim of its own success. If you want to eat well, you’ll need to venture a little farther afield, where innovative restaurateurs have been cultivating a knowledgeable clientele of professors, professionals, and savvy tourists.

St-Germain is a mix of expensive eateries that only the lucky few can afford and smaller bistros that bring back the days when intellectuals and artists frequented the Café de Flore. Overpriced tourist restaurants cluster around boulevard St-Germain near the Carrefour de l’Odéon; as you head south and north of this major boulevard, your choices will expand. Though the Marché St-Germain has been transformed into a type of mall, the restaurants hugging its perimeter offer a wide range of possibilities.

Crowded with ministries and important people, this neighborhood is so grand, you half expect to hear trumpets blowing each time you turn a corner. Eating here on a budget takes some skill, or at least a bit of insider knowledge. Though this is a rather staid neighborhood, a few streets are fairly lively, namely rue Cler, a pretty market street, and rue St-Dominique, home to some of the best restaurants on this side of the Seine. You’re likely to get fleeced if you insist on eating right next to the Eiffel Tower—that is, if you can find a restaurant, as the pickings are pretty slim in the Iron Lady’s immediate vicinity. If it’s a nice day, buy a sandwich at a bakery and have a picnic on the Champs de Mars, where you can’t beat the price or the view.

The famous cafes and brasseries (Le Dôme; Le Select; La Coupole; and Closerie des Lilas, where struggling writers and artists like Picasso, Hemingway, and Chagall once hung out) make for atmospheric spots for a drink or meal. This is also the most Breton (that is, from Brittany) section of Paris. The trains from Brittany arrive and depart from Montparnasse, and the story goes that between the World Wars, fresh-off-the-train Bretons, not knowing where else to go, settled in the immediate vicinity—hence the high density of crêperies along rues du Montparnasse and d’Odessa (the crepe having its origins in Brittany). In recent years, the neighborhood has woken up, gastronomically speaking, and a bundle of new gourmet bistros are tantalizing local taste buds. Check out rue Daguerre, a quaint street market by Denfert Rochereau Métro that’s peppered with restaurants.