William the Conqueror first ordered a castle built on this location, and, since his day, it has been a fateful spot for English sovereigns: King John cooled his heels at Windsor while waiting to put his signature on the Magna Carta at nearby Runnymede; Charles I was imprisoned here before losing his head; Queen Bess did some renovations; Victoria mourned her beloved Albert, who died at the castle in 1861; the royal family rode out much of World War II behind its sheltering walls; and when Queen Elizabeth II is in residence, the royal standard flies. With 1,000 rooms, Windsor is the world's largest inhabited castle.

You may have had your fill of palaces in London proper, but you haven’t seen the best. A fortress and a royal home for more than 900 years, it was expanded by each successive monarch who dwelled in it—more battlements for the warlike ones, more finery for the aesthetes. The resulting sprawl, which dominates the town from nearly every angle, is the Queen’s favorite residence—she spends lots of time here—and its history is richer than that of Buckingham Palace. 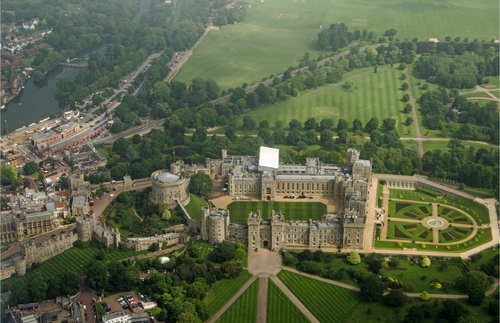 The castle’s State Apartments are sumptuous enough to be daunting, and a tour through them, available unless there’s a state visit, includes entrance to some mind-bogglingly historic rooms. Around a million people file through every year, so sharpen your elbows, and there are no cafes, so eat first. St George’s Chapel (closed Sun, pictured below), a delicately vaulted Gothic spectacle opened by Henry VIII, is his final resting place and that of nine more monarchs, including Elizabeth II’s father (George VI). EII’s mother (the Queen Mum) and sister (Princess Margaret) are with him in a side chapel and it’s safe to assume that this is where she will wind up one day, too. The palace also has a cache of priceless furniture (some of it solid silver), paintings, ephemera (look for the bullet that killed Lord Nelson, sealed in a locket) and weaponry, all of which, frustratingly, the audio guide, signage, and £5 souvenir book do little to describe, so the only recourse is to pepper staff with questions. In 1992, one-fifth of the castle area was engulfed by an accidental fire; the Queen recounted her despair over that, plus the breakup of two of her children’s marriages, in her now-famous “annus horribilus” Christmas speech to the nation, and much effort and funding went into putting everything back to the way it was before. In fact, the Queen originally opened Buckingham Palace to visitors to fund the restoration. 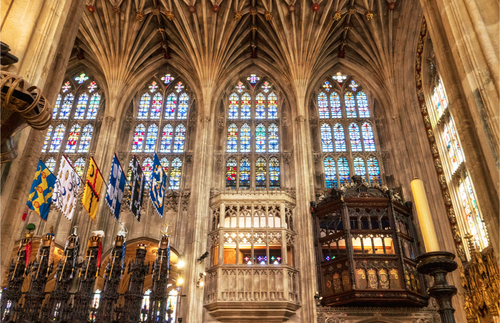 St George’s Hall, one of the repaired areas, is the Queen’s chosen room for banquets. Kids love Queen Mary’s Doll’s House, a preposterously extravagant toy built for the allegedly grown-up Queen Mary in the 1920s with working electricity, elevators, plumbing, specially written library books, and other details so extravagant they’re borderline offensive. From October to March, the tour also includes the Semi-State Rooms, George IV’s private area, considered by many to be among the best-preserved Georgian interiors in England. In August and September, you can climb the Round Tower for views, and sometimes in January and midsummer, the castle’s ancient Great Kitchen is open. There’s also a Changing the Guard ceremony at 11am (Mon–Sat, but alternate days Aug–Mar; check the website).

The Castle is the superstar here, but supporting roles are played by the succinctly named Great Park adjoining it, and the 4.8km (3-mile) pin-straight Long Walk that culminates with an equestrian statue of George III. Frogmore, open a pitiful few days in August, is the house where Victoria and Albert share their mausoleum. Just south of the castle is the Guildhall, where Prince Charles and Camilla Parker-Bowles had a quiet civil marriage in April 2005; it’s no St Paul’s, where in 1981 Charles wed his first wife, what’s-her-name, but it is also the work of Christopher Wren (note its delicate arches). The building was apparently designed without the center columns, which made councilors nervous; Wren threw up some columns but left them an inch shy of the ceiling, just to prove that his architecture was sound.

View our full list of Attractions in Windsor and Eton
advertisement