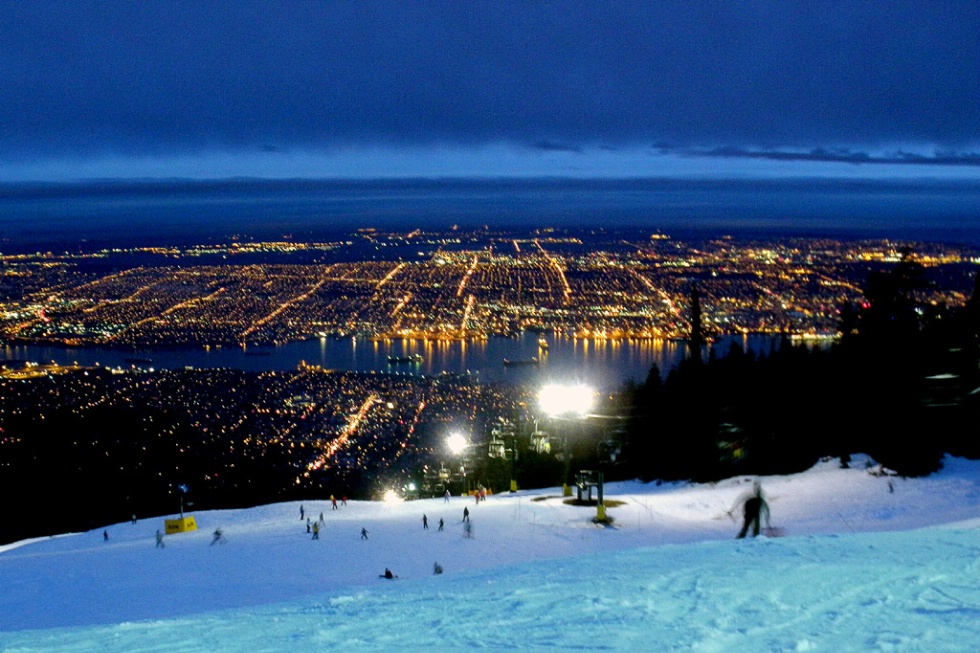 By
Winter Getaways
The holiday season is a popular time for Canadians to plan a getaway -- but where do you go? Whether you're thinking of escaping to Caribbean beaches or capturing the spirit of the season somewhere closer to home, these ten suggestions will inspire you to find a place full of good cheer. 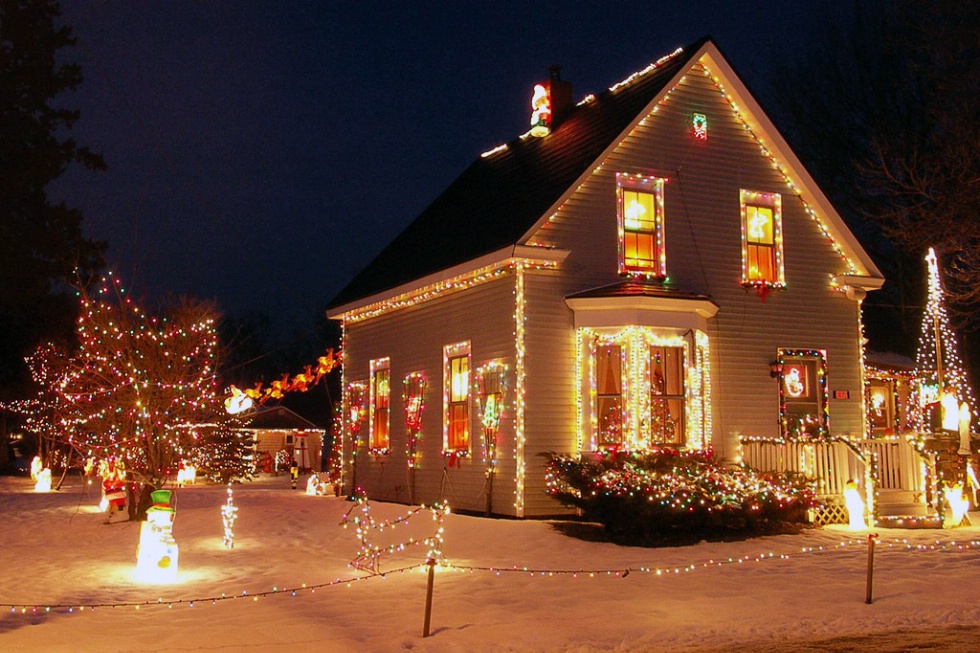 Cindy Kohler
Enjoy a Traditional Christmas in St. Andrews, New Brunswick
Dreams of an old-fashioned Christmas can come true with a holiday season visit to St. Andrews By-The-Sea, a small town with a big heart. This New Brunswick seaside town decks its halls, strings Christmas lights, and tunes up carolers like no other, keeping the traditions of the Yule season alive.

Christmas lights and garlands adorn the 18th-century light stands of Water Street, part of the Heritage District, with buildings that date from the early 1800s. Shopkeepers decorate windows with festive white lights, stars, angels, snow and spots of whimsy to entice people to browse for perfect gifts. Local churches schedule Christmas entertainments and bazaars. The Ross Memorial Museum decks its halls for an annual Christmas Open House and volunteers bake delicious cookies and morsels for all to enjoy.

The first Friday of December sees the official lighting of the Town Tree in Market Square, with a local choir caroling and encouraging everyone to take part. Guests are invited to enjoy hot apple cider while sharing a story or two. 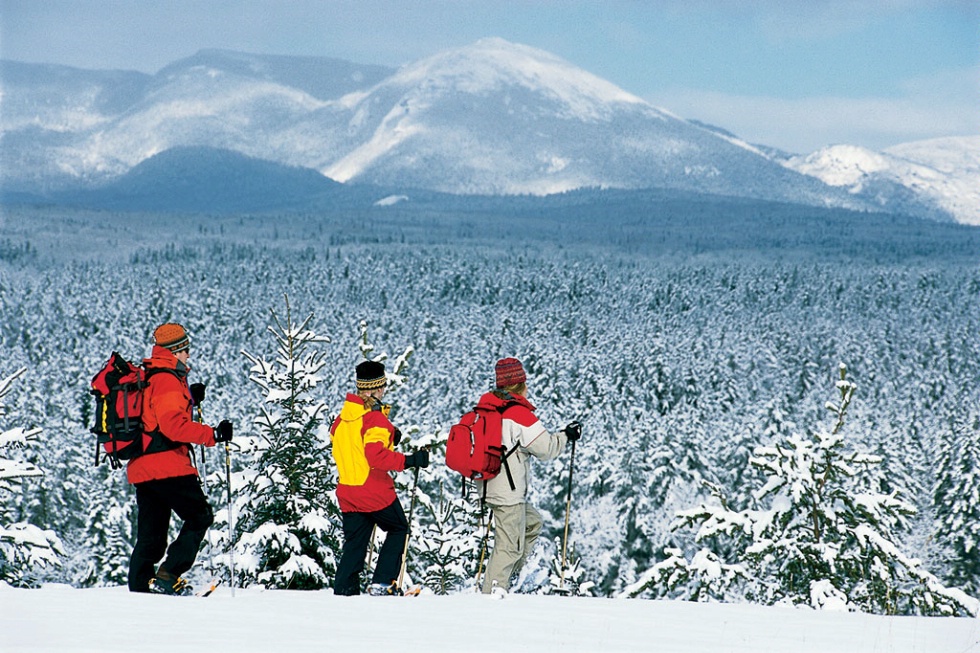 Jean-Francois Bergeron
Explore the Quebec Countryside in Style
Want to enjoy the Canadian outdoors in winter, with a minimum of hardship? A week-long cross-country ski adventure in the Quebec countryside lets you comfortably immerse yourself in the gorgeous scenery.

Get yourself and your skiis to the start of La Traversée de Charlevoix (www.traverseedecharlevoix.qc.ca) in the town of Saint-Urbain. While Nordic skiing experience is recommended, the Deluxe tour package lets you ski unencumbered, as a snowmobile drops off your gear and food at each stop along the way. The entire 105km (65 mile) normally takes 7 days, leaving plenty of time to enjoy the extraordinary beauty along the way, including the highest cliffs east of the Rockies. You'll spend your nights in cabins spaced about 20km (12.4 miles) apart, and the chalet-style accommodations may be shared with as many as 15 people, meaning you'll make lots of new friends along the way. 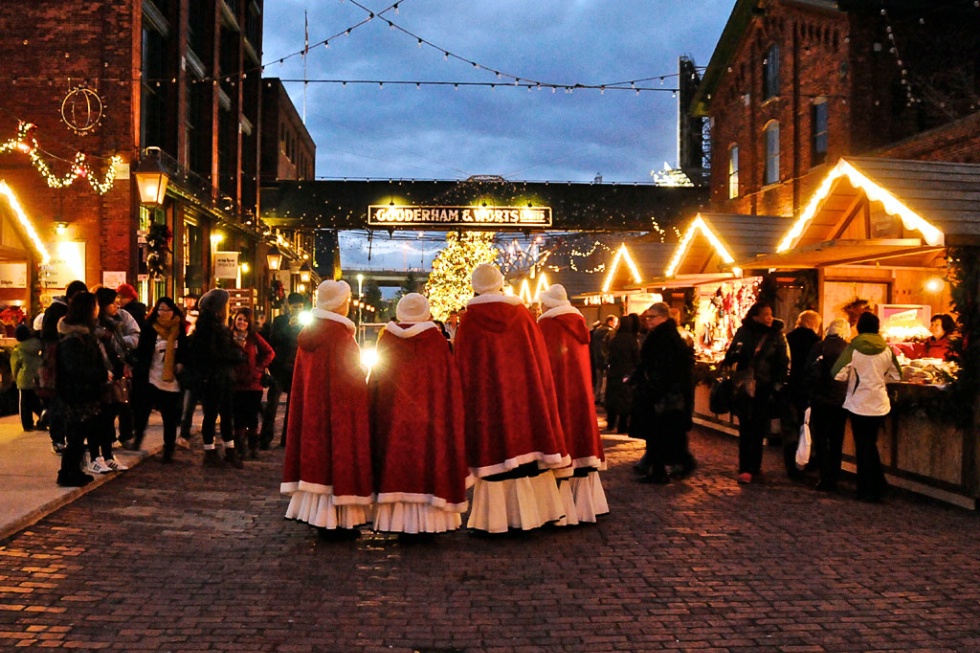 Mclellan Group
Chase Some Holiday Cheer in the Big City
Ways to celebrate the holidays abound in Canada's largest city.

At the Toronto Christmas Market, 19th-century buildings and cobblestones of the Distillery District add the touch of Christmases past. This modern version of a traditional European Christmas market features carolers, children's choirs, a German brass band, and many crafty gift ideas. The tree is usually about 12 meters (40 feet) high and swathed in thousands of lights.

At City Hall, you can rent skates and cut figure eights under a canopy of festive lights -- more than 30,000 people turn out for the official lighting of Toronto's Christmas tree, accompanied by live music and a fireworks display. When you're done you can pop over to the city's largest mall, the Eaton Centre, for holiday shopping just a block away.

Cap off the experience with a Toronto Symphony Orchestra performance of Handel's Messiah, one of the staples of the Christmas season. Apart from the soloists and choral voices, there are more than 60 instruments onstage; tickets sell out quickly. 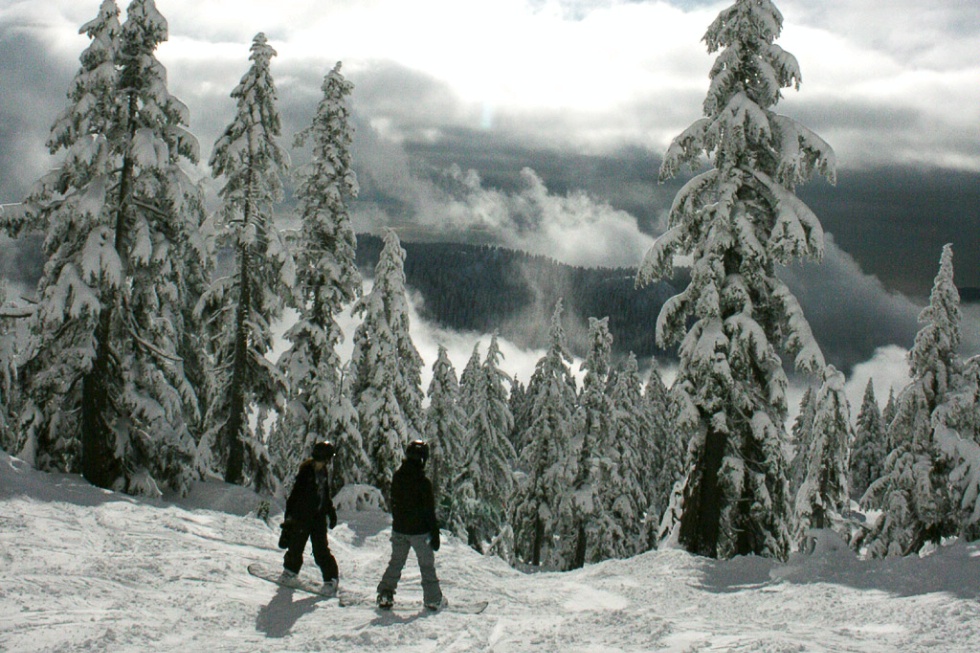 J.J. Koeman
Ease into Winter on Vancouver's Slopes
The snow is coming -- why not enjoy it? Vancouver gives easy access to great skiing and a mild introduction to winter, with average daytime highs of about +6 C. Plus, you can't beat the three dynamic resorts on Vancouver's North Shore, all half an hour or less from downtown: Cypress, Grouse, and Seymour mountains.

Mount Seymour caters to budget-conscious skiers and families, offering the most affordable day passes on the North Shore. At Grouse Mountain, the Skyride aerial tram shuttling skiers to the summit is an experience in itself, giving a tremendous panorama of the North Shore and the downtown skyline across Burrard Inlet. Half the 26 runs are illuminated at night till 10:00p.m. Cypress, site of the 2010 Winter Olympic snowboarding and freestyle skiing events, boasts the largest vertical drop on the North Shore, as well as groomed cross-country trails, snowshoeing, and snowtubing, including a tow lift.

The best part? Return to Vancouver and, after a full day on the slopes, you will still be able to enjoy a seafood dinner in Yaletown or a play at the Queen Elizabeth Theatre before climbing into bed. 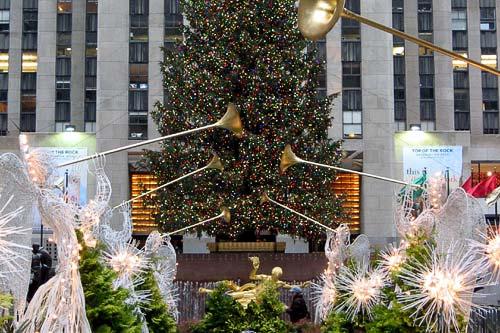 Grand Central Terminal offers a break from the cold with a free Holiday Kaleidoscope Light Show on the walls of its main concourse (every half-hour daily throughout December). 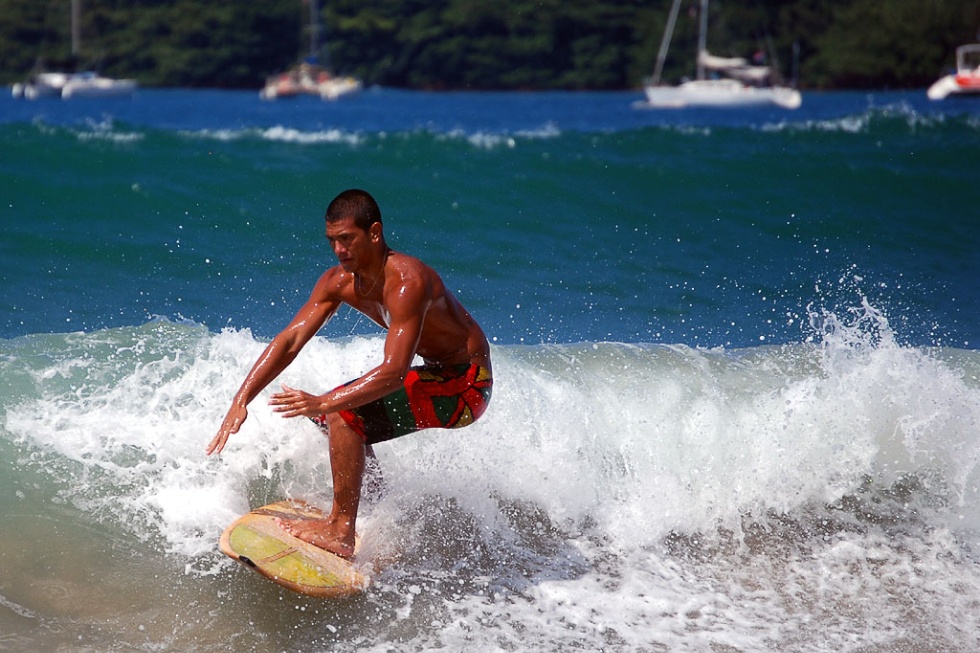 Frommers.com Community
Lounge on the Exceptional Beaches of Kauai
Hollywood could not have designed a more perfect beach: Nestled along the romantic North Shore of Kauai, Hanalei Bay is a two-mile-long half-moon of golden sand with a dramatic backdrop of craggy volcanic cliffs laced with thousand-foot waterfalls. Frommer's choice as top beach destination for 2012, Hanalei Bay's clear turquoise waters sport vibrant coral reefs, where rainbow-colored fish swarm and snorkelers and divers are in heaven. In the winter, large oceanic waves churn up the waters into sets of big waves, drawing board surfers and windsurfers to the thundering breakers.

But Kauai has more to offer than exceptional beaches (and there are 50 miles of those). Soft tropical air, sunrise bird song, essences of ginger and plumeria, sparkling waterfalls -- 90 miles from Oahu, this is an island paradise and the oldest in the Hawaiian chain. Moody rainforests, majestic cliffs, emerald valleys, and swaying palm trees await. You'll encounter quiet spots in the forest where you can listen to the rain dance on the leaves, and lazy days that end with the sun sinking into the Pacific amid a glorious tropical blaze. 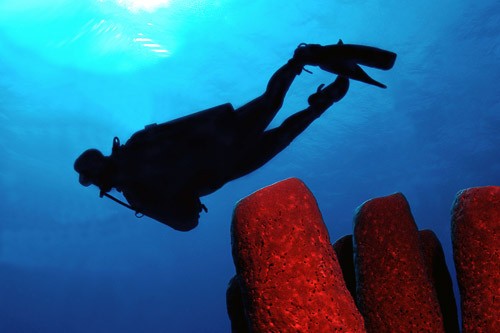 Frommers.com Community
Dive into the Caribbean Islands of Honduras
Hurry up and get to this beautiful tropical island in the Central American Caribbean. Roatan is the largest and most developed of the Bay Islands, and is now firmly on the cruise-ship radar, as upscale resorts are line up to sink their foundations into the stunning beaches. But today, Roatan is the unspoiled Caribbean, a milky-white coastline protected by the second-largest barrier reef in the world and a casual and refreshingly unpolished slice of the tropics. The biggest of the Bay Islands off the Honduran coast, Roatan is a serious dive and snorkel destination, its waters protected as a marine park. But other options are expanding rapidly: now you can also zip-line across the jungle-clad hills, take a submarine hundreds of feet into the ocean, or take an aerial real-estate tour. It's a bargain, too, for the Caribbean; a seafood dinner goes for around $10.

Photo Caption: Giant tube sponge and a diver in the waters of Roatan, Honduras.
advertisement 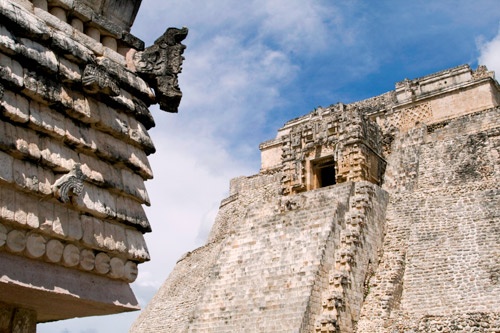 Eric Blanc
Visit the Land of the Maya
The Yucatán Peninsula is a land apart from Mexico, and not only because it sticks out from the mainland like a hitchhiker's thumb. Today's Maya, whose ancestors waged a centuries-long battle for independence, remain Yucatecans first, Mexicans second. One of Frommer's Top Destination picks for 2012, it remains the safest region in Mexico, with far less crime than travelers are likely to encounter at home. Canadians flock to Mexico, with more than 1.4 million visits per year.

Even so, the Yucatán offers all that is best about Mexico -- sublime beaches, a unique cuisine, joyous fiestas and exotic wildlife. Beyond Cancún and the Maya Riviera's enormous resorts lie inexpensive guesthouses on white sands shared only with scattered fishing families and near jungle villages where many Maya still live in thatch-roofed stone houses, sometimes among the ruins of great cities built by their forebears.

In the Yucatán, you could breakfast on eggs Benedict in your all-inclusive, climb a 1,500-year-old pyramid, cool off in a cenote (the Maya's "sacred wells"), feast on piquant recipes hundreds of years old, and bed down that night in a restored 19th-century hacienda. Better plan: Take it slow, spend some time with the stoic, dignified people whose culture is anything but a "lost civilization," and it will rearrange your perspective on the world. 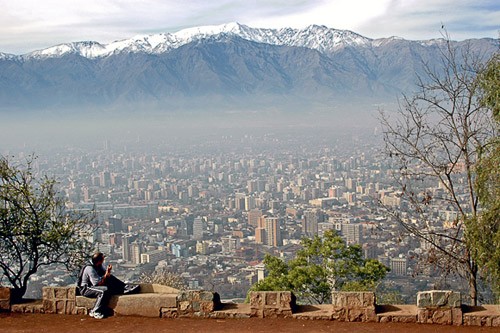 Frommers.com Community
Return to Mid-Summer Weather
Head south... way south, to the hemisphere currently enjoying mid-summer weather. Travelers have, for years, categorized Santiago de Chile as a "gateway city" to other destinations like Patagonia and the Atacama Desert, but that moniker no longer holds ground. Santiago has earned its place as one of South America's most exciting cities, and was one of Frommer's Top Destination picks for 2011.

Situated in one of the more stunning locations imaginable at the foot of the towering Andes Mountains, Santiago has become a fashionable megalopolis that is home to chic restaurants, stylish hotels, art galleries, and new cultural centers and museums such as the Museo de Moda, easily one of the best fashion museums in the world. Burgeoning neighborhoods such as Bellavista thrive with dozens of restaurants, bars and the Patio Bellavista, a high-end outdoor market with cafes and shops hawking arts-and-crafts and funky clothing. The city's Metropolitan Park, larger than New York City's Central Park, is undergoing a $10 million renovation with a new cable car, 12 new botanical gardens, and an expansion of the city's zoo. Parque Forestal, known for its lovely antique facades, is now home to outdoor cafes, the MAVI art museum, and independent clothing shops. 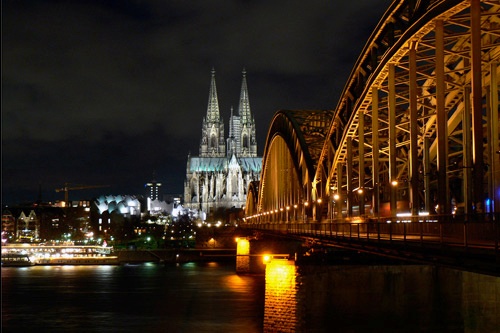 Rich B-S
A European Christmas on the Water
How does Christmas on the Rhine sound? Christmas market-themed cruises from operators such as Tauck (www.tauck.com) are a great way to experience the holiday season in Europe. One of many market cruises offered is one along the Rhine from Basel, Switzerland (home to 27 museums and large marketplaces for art and antiques), to Cologne, Germany (with its towering cathedral and Christkindlmarkt, Europe's most famous Christmas market), or vice versa.

Passengers have the opportunity to hop off at lesser-known markets like France's Colmar Christmas Market. Onboard festivities include tree-trimming, gathering for mugs of glühwein (mulled wine), and enjoying a traditional European Christmas dinner. The eight-day tour visits France, Germany, and Switzerland; departing south from Basel on December 4, and returning north from Cologne on December 11.

Photo Caption: Cologne Cathedral and Hohenzollern Bridge with the floating Christmas market on the Rhine, at left. Photo by Rich B-S/Flickr.com
Winter Sports