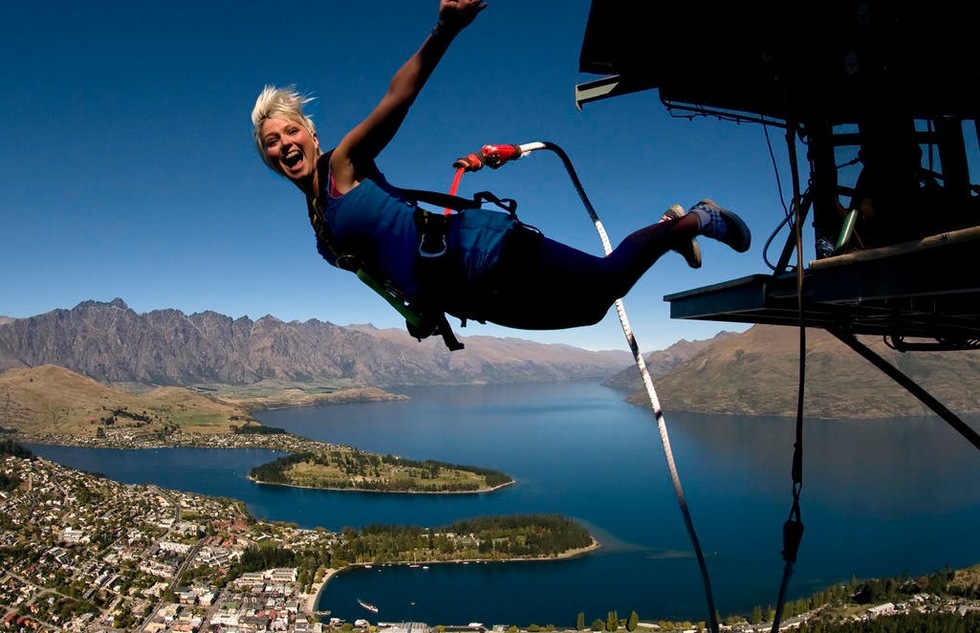 By Zac Thompson
Given New Zealand’s over-the-top landscapes, it’s no surprise that the country is a hot spot for over-the-top adventures. There are churning rivers for rafting, blustery coasts for windsurfing, jagged peaks for skiing, redwood forests for mountain biking, hillsides for luging, and caves for spelunking. If you’re a thrill seeker, you don’t have to look far.
We realize, however, that not every visitor is up for, say, bungee jumping from a height of more than 400 feet with nothing to save them but an elastic tether. For those sensible folk who would nevertheless like to commune with nature—as well as for you daredevils who crave jolts of adrenaline—we’ve put together a list of New Zealand outdoor adventures ranked according to extremeness, from mild to wild to WHAT'S WRONG WITH YOU ARE YOU COMPLETELY NUTS?!

We'll start with the easy stuff and turn up the heat as we go along. 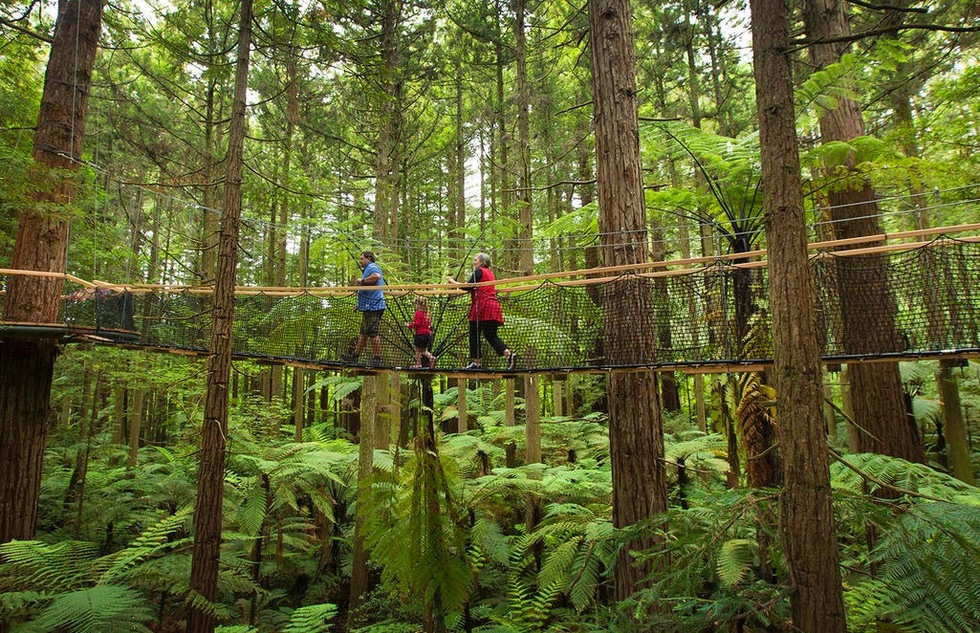 Tourism New Zealand
Redwoods Treewalk
Redwood trees aren’t native to New Zealand—they were brought over from California around the turn of the 20th century to serve as a lumber source. But the supersized plants thrived in New Zealand’s congenial climate, reaching heights of more than 230 feet in a little more than a century.
Today, the Whakarewarewa Forest in Rotorua makes a dramatic backdrop for hiking and mountain biking excursions. For an elevated view, take a stroll along the Redwoods Treewalk, a system of bouncy suspension bridges hanging 40 feet above the forest floor.
Comparable to: walking across the springy surface of a trampoline—that happens to be 40 feet in the air 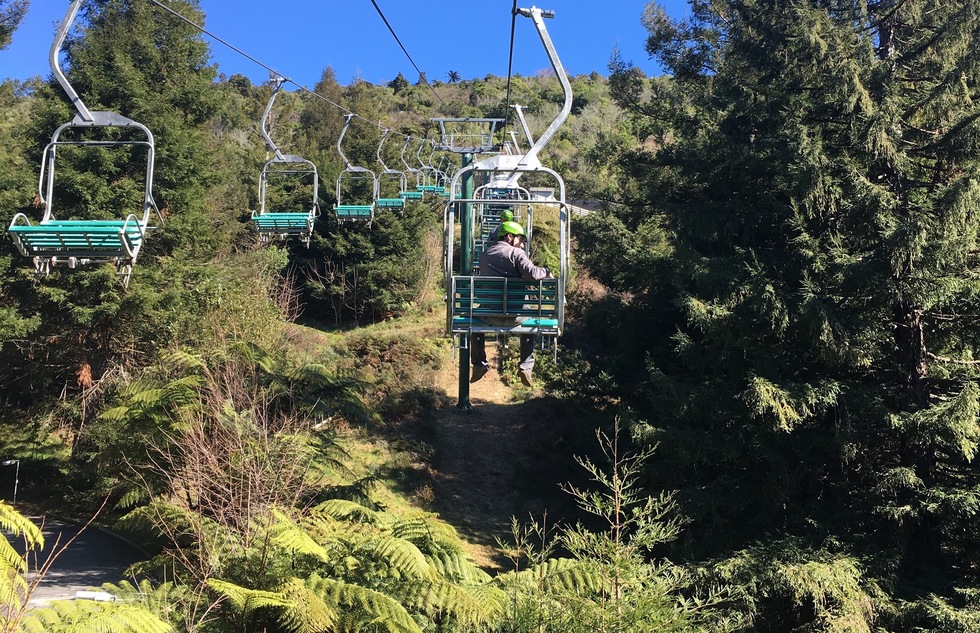 Zac Thompson
Scenic Gondolas, Chairlifts, and Funiculars
To get a good lay of the land without scurrying up sheer rock walls or boarding a jerky helicopter, you can take one of the country’s scenic gondola, chairlift, or funicular rides. In Wellington, a cable car ascends from Lambton Quay in the heart of the city to the hilltop Botanic Garden, where you can take in views of downtown, the harbor, and surrounding mountains. Queenstown’s Skyline gondola offers panoramic views of majestic snow-capped mountains and deep-blue Lake Wakatipu. Rotorua’s Skyline chairlift, meanwhile, supplies a tranquil flight amid New Zealand’s iconic ferns and evergreens (pictured).
Comparable to: the slow ascent before a roller coaster drop—but without the drop
Thrill level on a scale of 1 to 10: 2 (Mild) 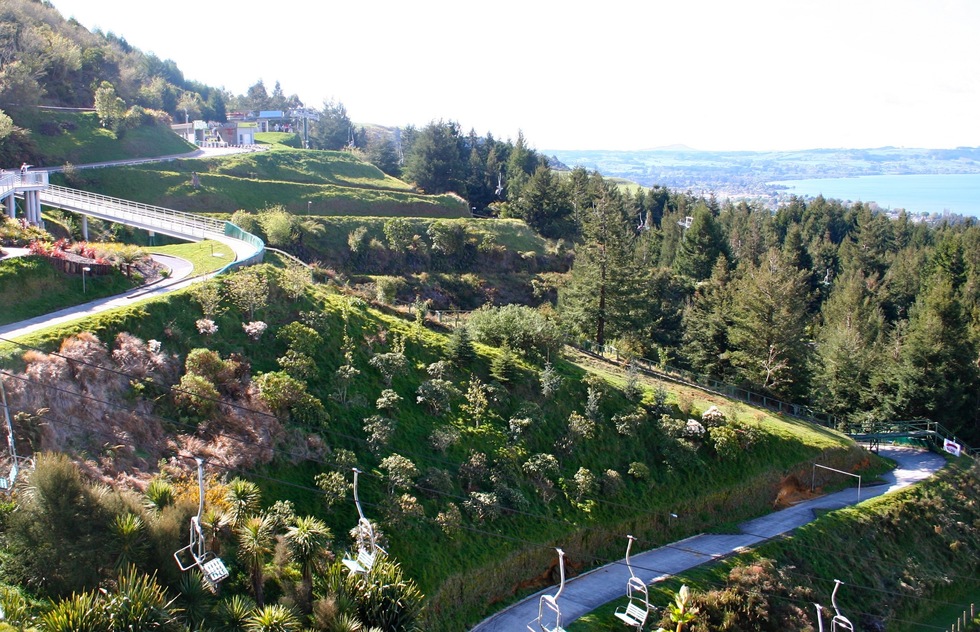 Adam Axon/Flickr
Luge
After the gondola ascends at the Skyline locations in Queenstown and Rotorua, you can stay up there to sample an abundant buffet amid bird’s-eye views of forests, mountains, and large expanses of water. When you’re ready to head back down the mountain, you can either take the gondola again or, for a little more octane, get behind the handlebars of a luge car and follow a bumpy, curving downward path to the bottom (the Rotorua track is pictured above).
Comparable to: driving a go-cart powered by gravity alone
Thrill level on a scale of 1 to 10: 3 (Mildish) 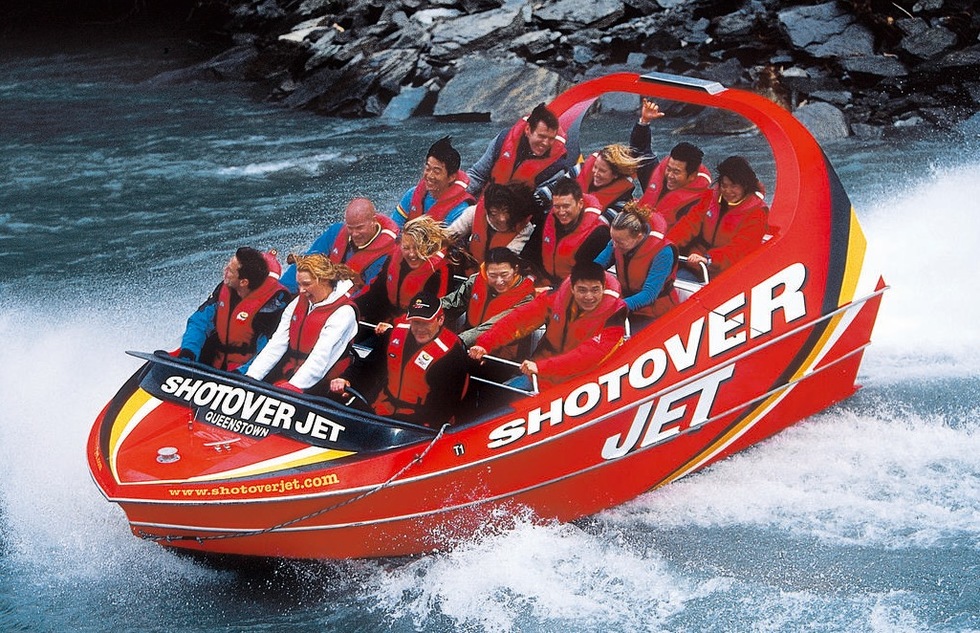 Shotover Jet/Tourism New Zealand
Jetboat
New Zealand daredevils have been innovators in the world of adventure sports, popularizing bungee jumping and inventing activities like black-water rafting (which we’ll get to in a minute) and jetboating. The latter involves riding in a vessel that’s propelled forward at high speeds by shooting water from the back of the craft.
Jetboats are designed to zip across shallow rivers, meaning you can go where other boats can’t—like the canyon-flanked Shotover River and gravelly Dart River, both located near Queenstown. On fast-paced cruises, the skilled pilots of Shotover Jet zoom through narrow stone walls and execute dizzying, spray-generating 360-degree spins.
Comparable to: being in the back of Jeremy B.’s Toyota Celica while he does doughnuts in the high school parking lot
Thrill level on a scale of 1 to 10: 4 (Moderate) 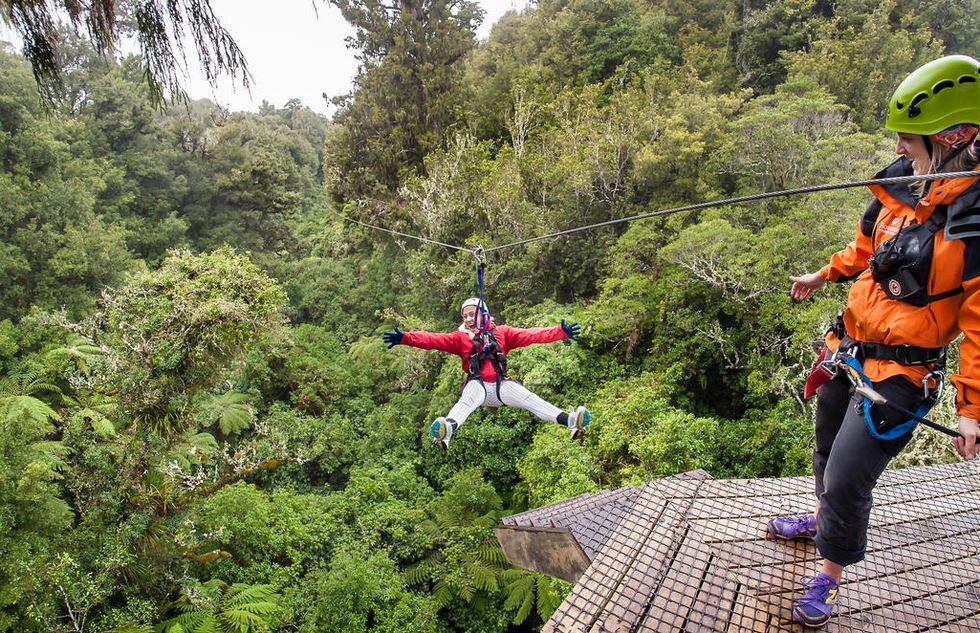 Andy Belcher/Tourism New Zealand
Zipline
On this list’s spectrum of airborne stunts, ziplining belongs about midway between easy-peasy gondola rides and truly terrifying bungee jumps. On a zipline, you’re not safely enclosed in a slow-moving cabin as on a gondola, but your tight-fitting harness will feel a heckuva lot more secure than the piddling ankle restraints you get for a bungee free fall.
As for the best zipping locations, simply pick your favorite type of scenery: You can zoom past coastal views near Auckland, forests in Rotorua (pictured), and alpine vistas in the Remarkables, a not-very-humbly named mountain range in Queenstown. For extra thrills, you can take the ride backward, upside down, or backward and upside down.
Comparable to: what a clothespin must feel like on a retractable washing line
Thrill level on a scale of 1 to 10: 5 (Moderate) 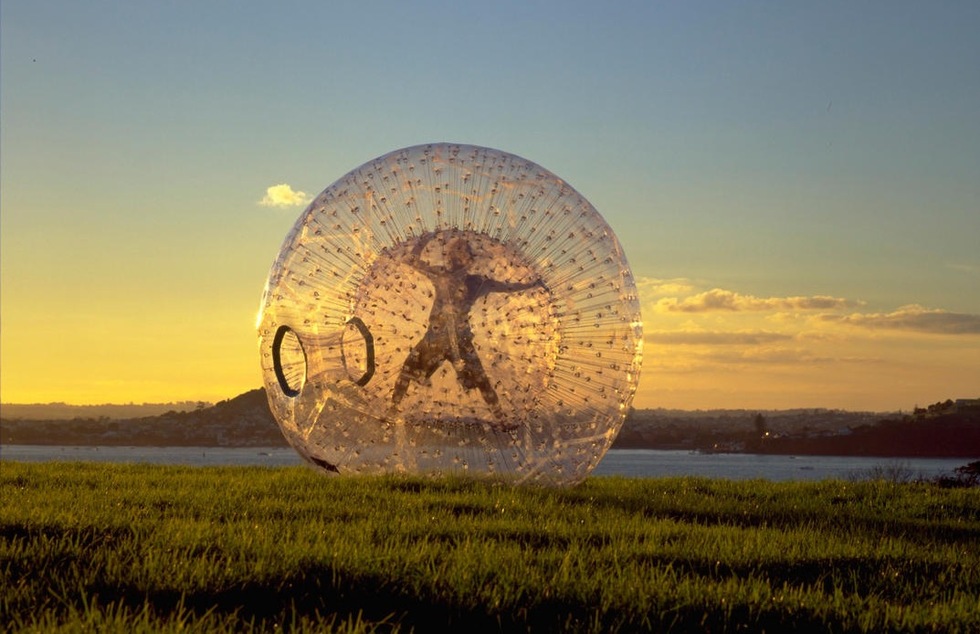 Zorb Rotorua/Tourism New Zealand
Zorb
One of New Zealand's strangest contributions to the world of adventure sports would have to be Zorbing, which is no more or less than rolling down a hill while encased inside a giant transparent ball. The peculiar pastime debuted in Rotorua in 1994, and this is still the best place to try it out. At Zorb Rotorua, you can tumble down verdant hillsides along several different tracks, ride solo or with one or two other passengers, and even opt for a ball filled with water so that you can wind up not only discombobulated but also wet.

Comparable to: getting placed inside a hamster ball that is itself stuck inside a washing machine during the spin cycle 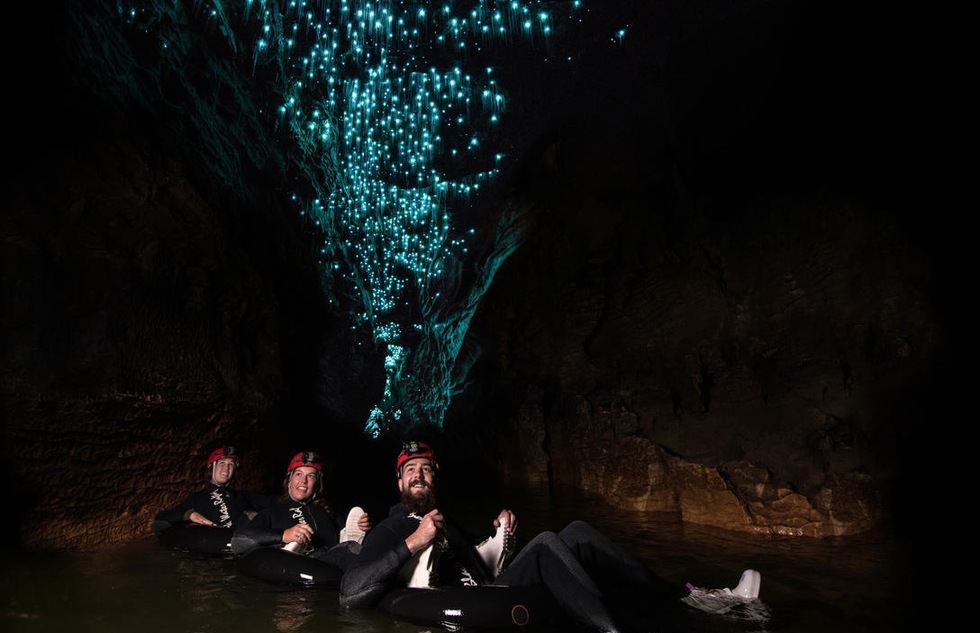 Corin Walker Bain/Tourism New Zealand
Black-Water Rafting
Black-water rafting is the New Zealand term for tubing along underground rivers, particularly in the Waitomo Caves, where you can drift along under a stone ceiling made phosphorescent by scores of glowworms. Through the Legendary Black Water Rafting Co., cave tubing is usually combined with other physically demanding adventures including rock climbing, rappelling into canyons, squeezing through narrow crevices, and leaping from waterfalls.
Comparable to: reenacting most of the major plot points in The Goonies
Thrill level on a scale of 1 to 10: 7 (Moderate to Wild, depending on what you take on) 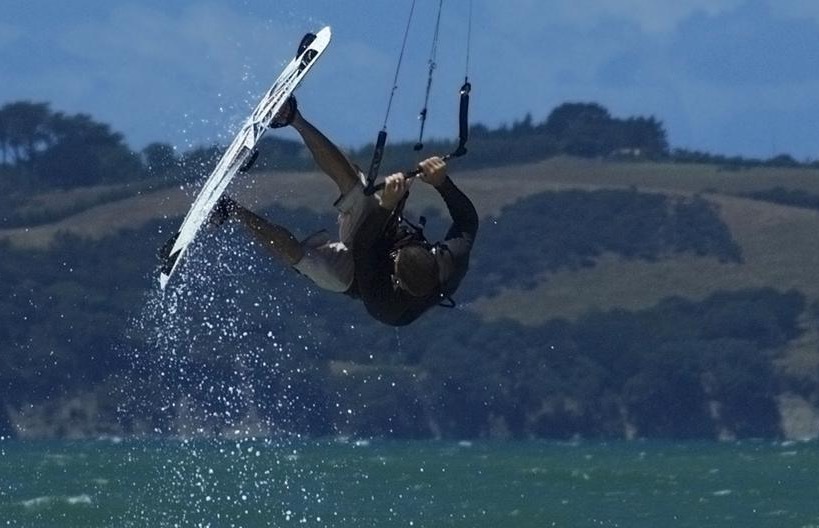 Tourism New Zealand
Windsurfing and Kiteboarding
If you ever want to be quite literally blown away by a city, try Wellington. The average wind speed in the New Zealand capital is 18 miles per hour, and there are typically about 175 days each year when gusts exceed gale force (46 mph). By contrast, the average wind speed in Dodge, Kansas—one of the breeziest spots in the United States—is about 14 miles per hour.
As you might imagine, Wellington’s blustery conditions suit those into sailing, windsurfing, and kiteboarding just fine. The latter is probably the most extreme of the three sports, since it combines elements of the first two, as well as surfing: While balanced on a board and harnessed to a giant kite, you’re dragged across Wellington Harbour, skimming along the surface and occasionally getting pulled into the air, like a skipping stone.
Comparable to: the end of The Red Balloon, when that kid gets pulled into the stratosphere
Thrill level on a scale of 1 to 10: 8 (Wild) 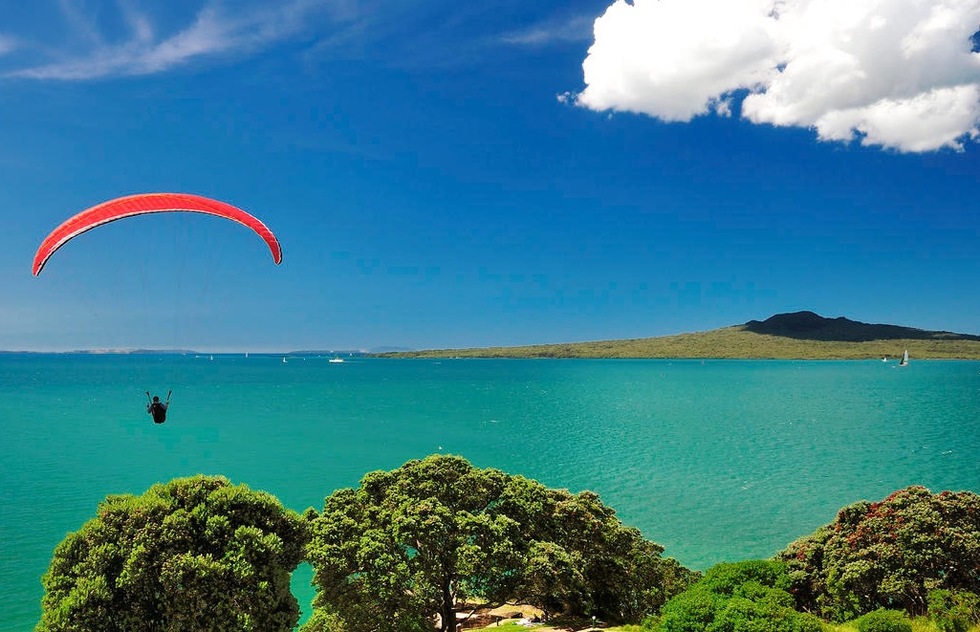 Bob McCree/Tourism New Zealand
Paragliding
New Zealanders might call themselves Kiwis after a funny-looking native bird that can't fly, but their preferred outdoor pastimes suggest a desire to soar with eagles. A case in point: the popularity of paragliding, which involves strapping yourself into a harness attached to a flap of fabric and leaping into the wild blue yonder from clifftops, gondolas, and other high-altitude perches for a slow, scenic descent to terra firma. If ever an activity could be described as tranquil and terrifying at the same time, this is it. First timers can opt for tandem jumps with experienced pros over a postcard-ready coast near Auckland (pictured) or from the top of the Skyline gondola overlooking downtown Queenstown and Lake Wakatipu.

Comparable to: being a plastic shopping bag caught in an updraft 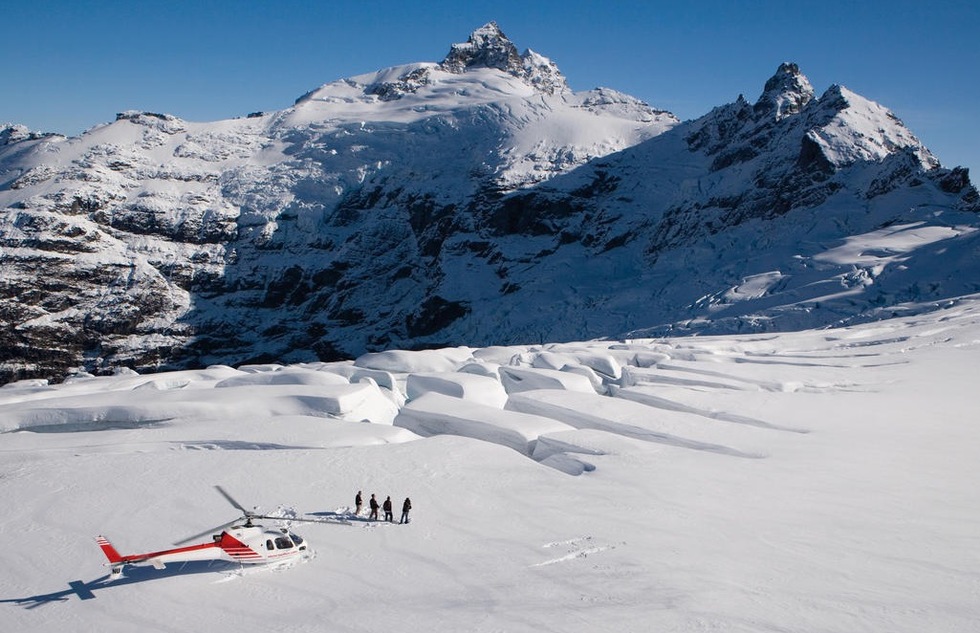 Glacier Southern Lakes Helicopters/Tourism New Zealand
Heli-Skiing
For those intent on hitting the slopes where the chairlifts don’t go, there’s heli-skiing—boarding a helicopter to reach otherwise untouched terrain. In New Zealand’s winter (which corresponds to summer in the Northern Hemisphere, remember), intrepid souls practice the sport in the rugged Southern Alps surrounding Queenstown, the country’s capital for outdoor recreation.
You’ve probably seen movie stunts where people jump straight from helicopters to downhill skiing, with nary a pause to unload gear in between. It’s not like that in real life—the helicopter lands on the mountaintop and you’re given time to get out and get your bearings before your descent. Even so, this is no bunny hill we’re talking about. You'll be in ungroomed wildnerness, where the risk of avalanches is real.
Comparable to: an ordinary Tuesday morning—if you happen to be James Bond
Thrill level on a scale of 1 to 10: 10 (Adrenaline Overload) 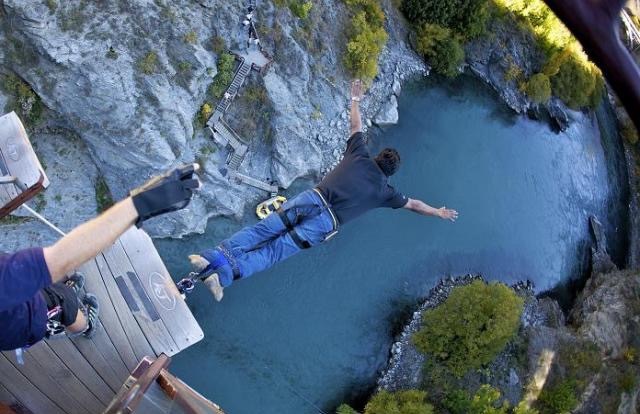 AJ Hackett Bungy New Zealand
Bungee Jumping
Falling from a great height while attached to nothing but an elastic cord wasn’t invented in New Zealand. This is, however, where bungee (or “bungy,” as it’s styled here) became available to the public, thanks to entrepreneur of daredevilry A.J. Hackett. In 1988, Hackett’s eponymous company set up the world’s first commercially operated bungee jump at a bridge suspended over the Kawarau Gorge outside of Queenstown. Today, the company’s jump sites have expanded to include a bridge in Auckland and two more spots in the Queenstown area—one where you can take the plunge over the city at night and another whose 134-meter (440 feet) drop makes it the highest bungee in New Zealand.
Even if you don’t go over the edge—and we don’t blame you—the original Hackett operation at Kawarau is worth visiting to take in the scenery, go on a kinder, gentler zipline ride, and station yourself on the observation deck to watch jumpers battle their own survival instincts. It’s top-notch people watching.
Comparable to: getting turned into a human yo-yo
Thrill level on a scale of 1 to 10: 37 (ARE YOU CRAZY?!)
Family & Kids
Outdoor & Adventure
Vacations