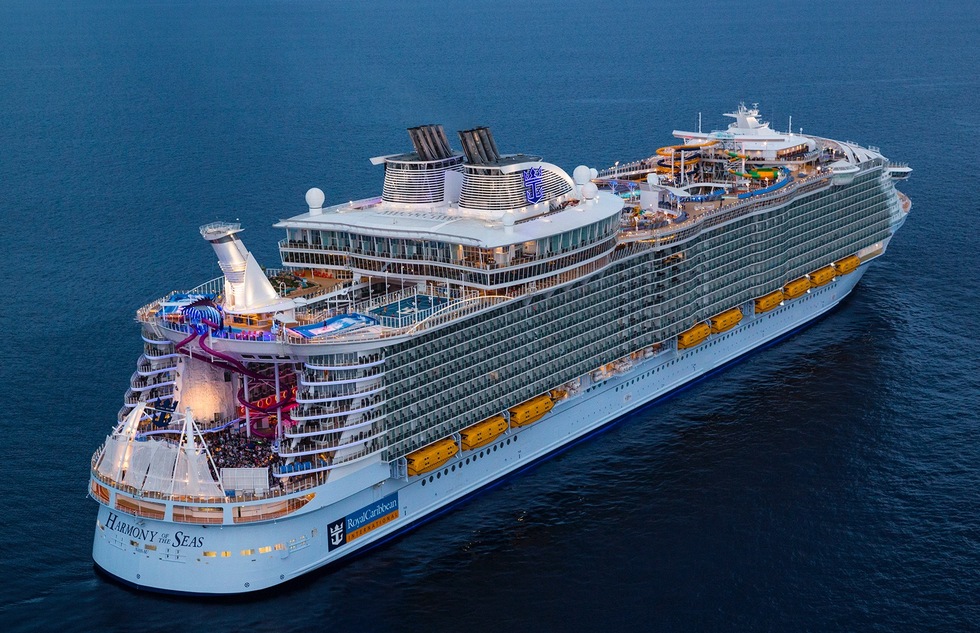 What I Learned Aboard the World's Biggest Cruise Ship

In part because I am drawn to superlatives (and in part because—full disclosure—I was invited on a complimentary preview voyage for media types, travel agents, and Royal Caribbean muckety-mucks), I decided that my first proper cruise would be on the largest passenger vessel ever built: the Harmony of the Seas. Which, I think you’ll agree, is a pretty gentle name for a behemoth. I would have called it Gargantua the Heavy. 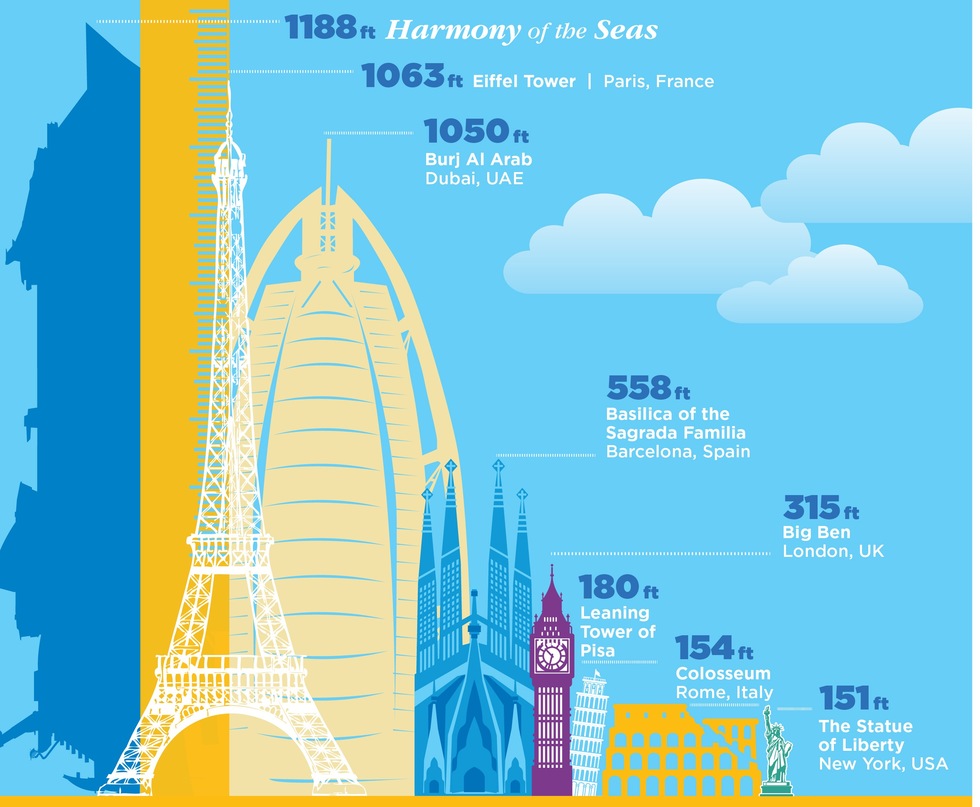 In any case, the thing is big. It weighs about 227,000 registered tons, stretches 1,188 feet long, has 18 decks, and can carry more than 6,000 passengers. According to Royal Caribbean’s press materials, the ship is twice as high as the Washington Monument (if you stood Harmony up longways) and as heavy as 17,000 African elephants.

If it helps you to visualize things, I am as tall as 9 and a half No. 2 pencils (okay, fine, 9 and a third), and I weigh about the same as 24 Yorkshire terriers. Needless to say, I felt dwarfed. 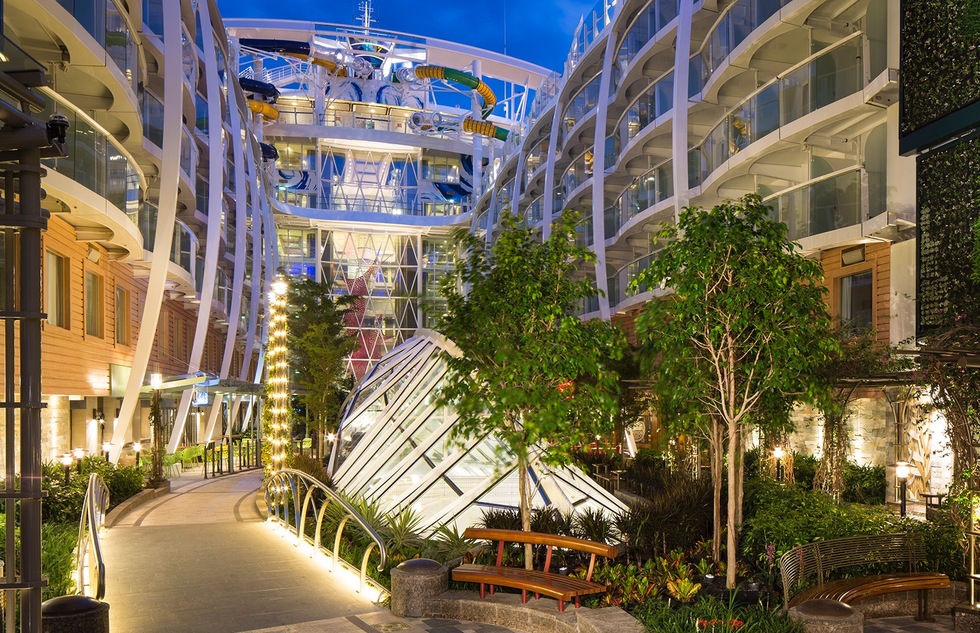 But, strangely enough, Harmony’s hugeness isn’t the type that awes and overwhelms you. For a taste of that kind of immensity, drop by the observation deck at night and gaze out at the churning, unfathomable, pitch-black sea. The ship’s bigness, by contrast, seems designed to make you feel comfortable and secure. Like an overstuffed armchair. Or an upper middle-class suburb.

The latter strikes me as the most apt comparison. On board the ship, you’ll find seven distinct “neighborhoods” with features including a leafy park (pictured), a multitude of theme restaurants, a shopping promenade, an all-American boardwalk with a carousel and arcade, elaborate fitness and recreational facilities, and entertainment venues hosting crowd-pleasing musicals. Throw in an elementary school system and a zoning board, and you’d have all the necessary elements for the sort of planned community for which young professionals leave the city to raise their children. 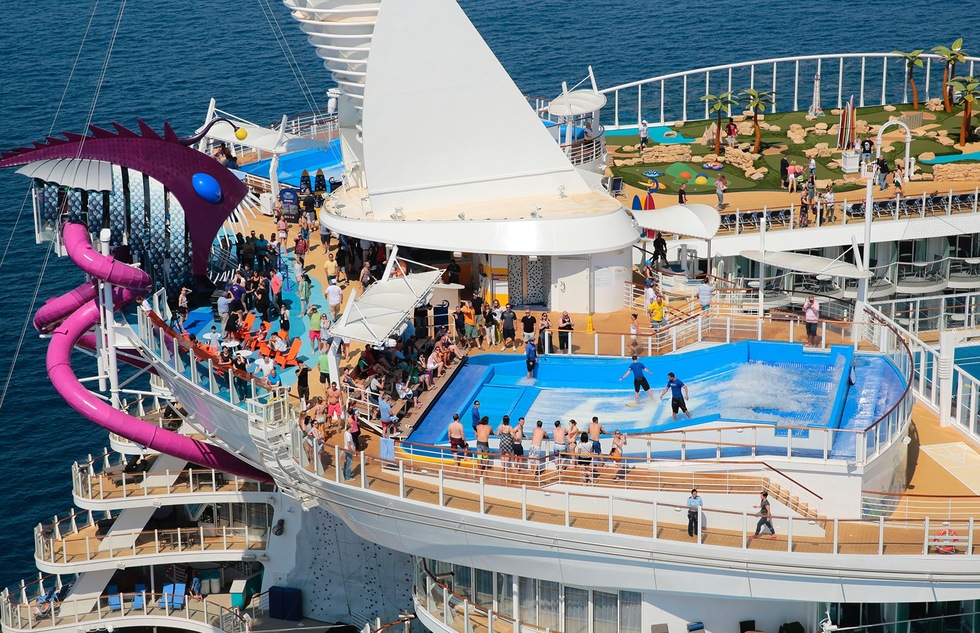 The ocean, meanwhile, plays a surprisingly minor role in the passenger experience. The ship’s size lets it plow through the Caribbean without generating so much as a ripple on board. At times I thought maybe I was beginning to feel an oh-so-subtle, ever so slightly nauseating pre-rocking sensation, but since nobody else I talked with agreed with me, I’m half-convinced I was imagining things. My fellow passengers seemed to give the sea about as much thought as you’d give the asphalt on a road trip.

The manmade water features, on the other hand, get a great deal of attention. Spanning the entire length of deck 15, the ship’s Pool and Sports Zone has—get ready for some more figures—four swimming pools, three spiral water slides, an aqua playground for kids, several hot tubs for grownups, and two high-speed surfing simulators (one is pictured above). It’s as though the ship’s designers wanted to keep the surrounding ocean in check by showing it just how many ways that water can be harnessed and domesticated. 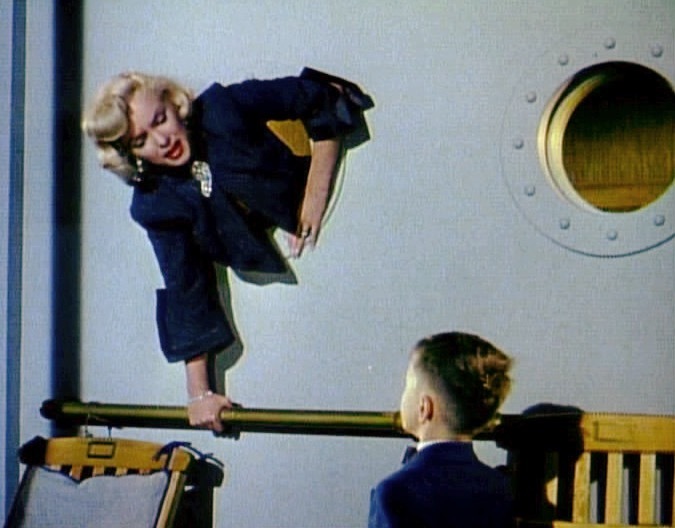 If you’re a regular cruiser, none of this is news to you. But if, like me, you’ve gathered your perceptions of ocean liners from popular culture, you might have the wrong idea. On stage and screen, cruising comes in two flavors: 1.) disasters (Titanic, The Poseidon Adventure, the abysmal 2002 comedy Boat Trip, of which critic Richard Roeper said, “If the ship hit an iceberg, I would have been rooting for the iceberg”); and 2.) old-fashioned merriment, involving tap-dancing sailors (Anything Goes), resourceful Americans on the make (Gentlemen Prefer Blondes, pictured above), or Kathie Lee Gifford (those 1980s Carnival Cruise commercials).

But in reality, the only pressing danger you sense is norovirus—largely because there are warnings about washing your hands everywhere—and the old-timey stuff is kept to a minimum.

In fact, I detected whiffs of nostalgia in just three areas . . . 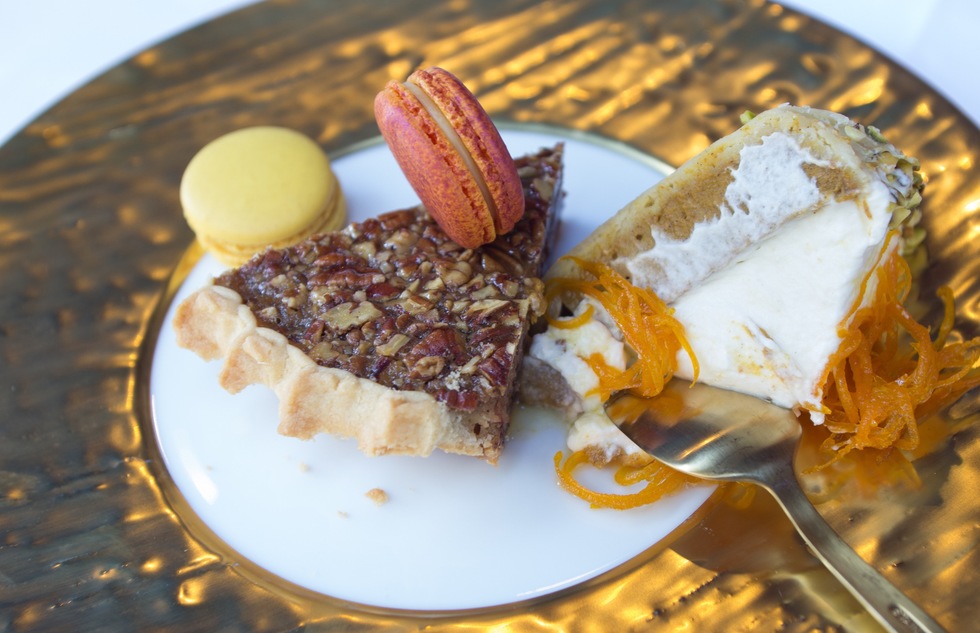 * The muster drill. This is a mandatory safety briefing held at the beginning of the voyage. Evidently passengers once had to attend while wearing life jackets; now you just watch a video with yet another hand-washing advisory and slightly confusing info about lifeboats and such. But the name of the exercise and its links to nautical history have a certain old-school feel.

* Dining at assigned tables. You can opt for specialty restaurants instead, but there’s still a communal option for traditionalists. And they tell me some ships have formal nights (my short cruise did not).

* Feminine pronouns for the ship. I heard Harmony referred to as a "she" several times while I was on board. What say we drop this particular convention? Something about it makes my skin crawl.

As for modern gimmicks and gizmos, there are quite a bit more of those. A sampling . . . 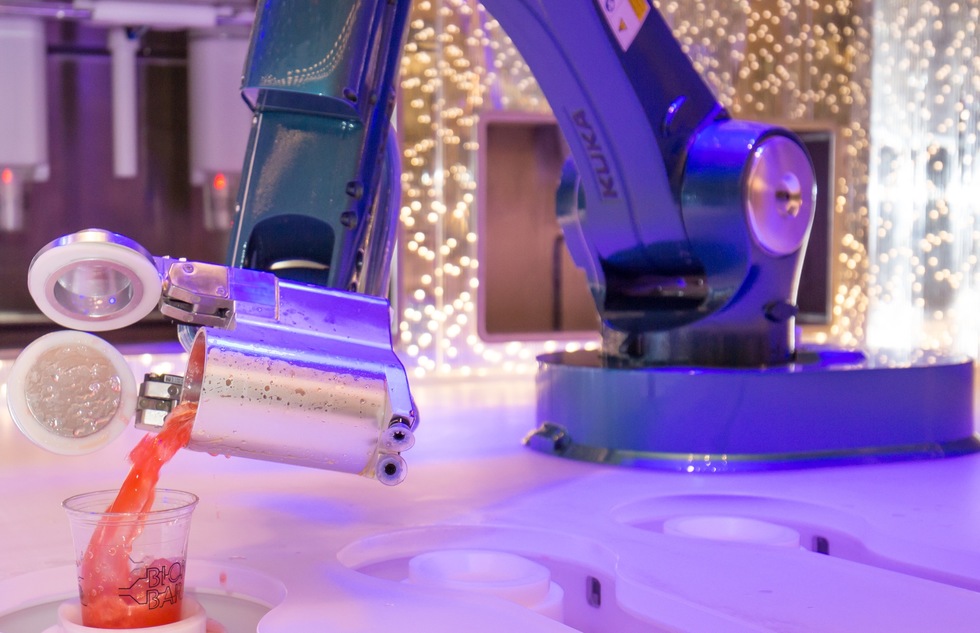 * The Ultimate Abyss. A 150-foot slide—billed as the tallest at sea—will take you from deck 15 to 5. It’s good for a quick thrill, and since it’s dry, you don’t end up with water up your nose.

* Automated bars. At the Bionic Bar, robotic arms (pictured) mix drinks. Maybe I’m anthropomorphizing, but I found something poignant in the way they shake a Tom Collins—the monotonous rhythm of it fairly screams, “I was created for THIS?!” There’s also a cocktail lounge-cum-elevator that slowly travels between decks 4 and 8.

* The Aqua Theater. An outdoor performance venue with a pool and moving platforms allows for shows that resemble a cross between Stomp and one of MGM’s Esther Williams aquatic ballets. 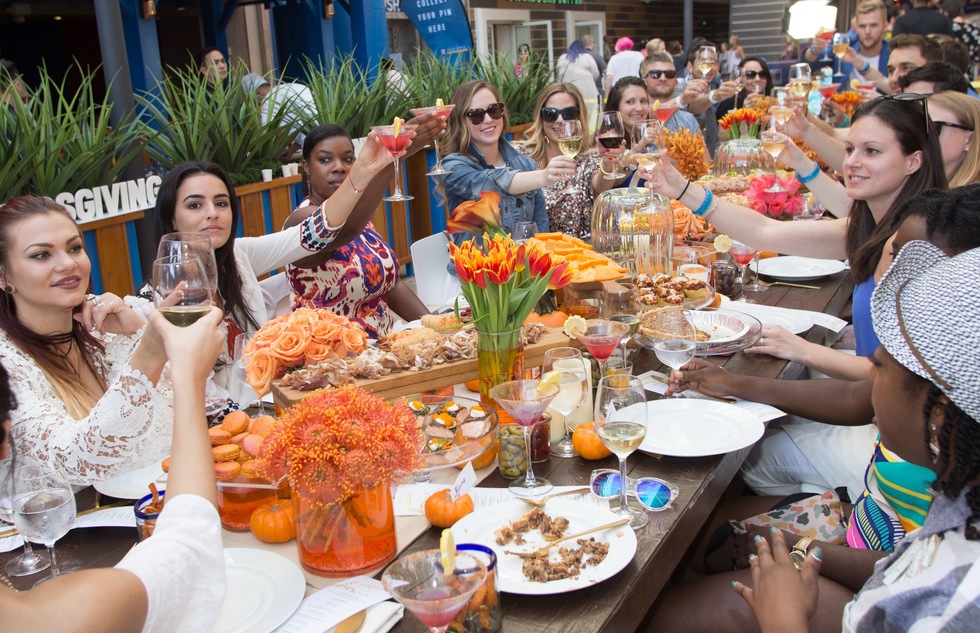 Another thing I didn’t realize about cruising was that I’d be spending so much time stuffing my face. There are casual eats like hot dogs, burgers, and pizza; wide-ranging buffets; the main dining rooms, which serve what I could call wedding-reception fare (prime rib, pastas, that sort of thing); and numerous specialty restaurants, from the whimsical Wonderland (which features Lewis Carroll-inspired decor and adventurous, molecular-gastronomy dishes) to offerings from celebrity chefs like Jamie Oliver and the James Beard Award-winning Michael Schwartz. If, by the end of the trip, you're not competing with the ship’s gross tonnage, you’re not doing it right. 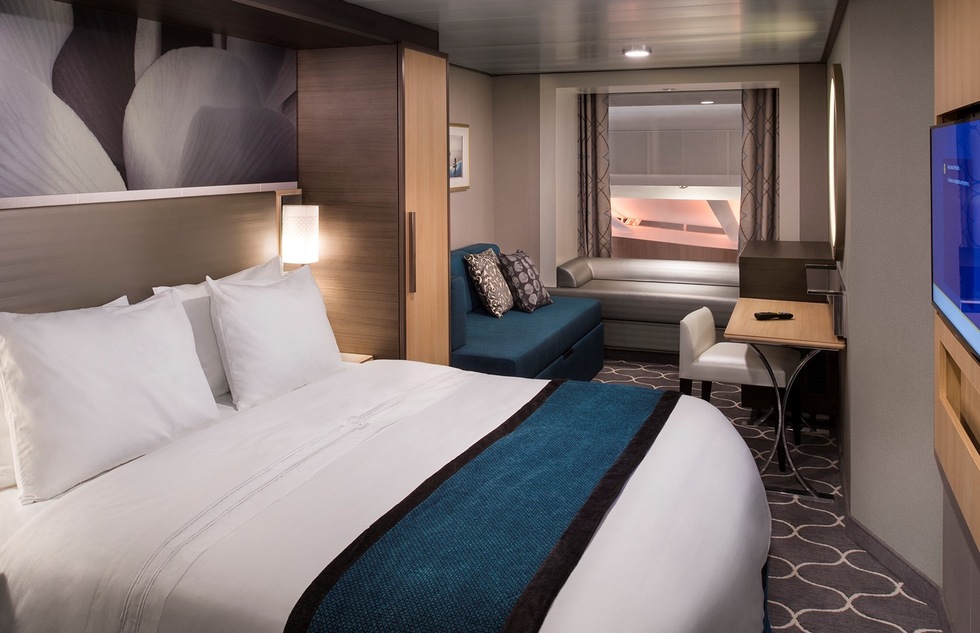 Royal Caribbean International
The Room
As for the cabins, my expectations were off there, too. Even though the ship is big, I still figured I'd have to sleep in a tiny berth where I could sit on the bed, compulsively wash my hands in the sink to ward off norovirus, and peer out the porthole—all at the same time. Instead, my standard stateroom (which looked like the one pictured, except that I had a balcony) featured a queen-size bed, a separate sitting area, two wardrobes, and, in the bathroom, a shower stall where I could have danced the Hokey Pokey had the notion struck. According to the specs, the cabin is only 182 square feet, but unless you're accustomed to wide open spaces you're not liable to feel cramped. New Yorkers might wonder what to do with all the space. 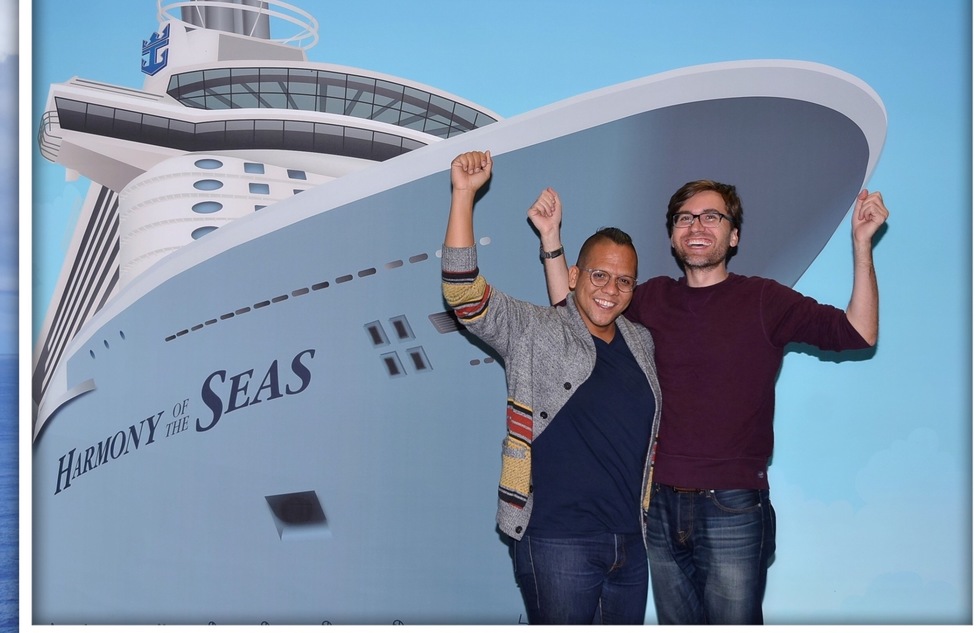 That’s me on the right, in case you didn't believe me about the No. 2 pencils. Why do photographers always make subjects raise their arms in these souvenir pictures? And why do I let them boss me around?