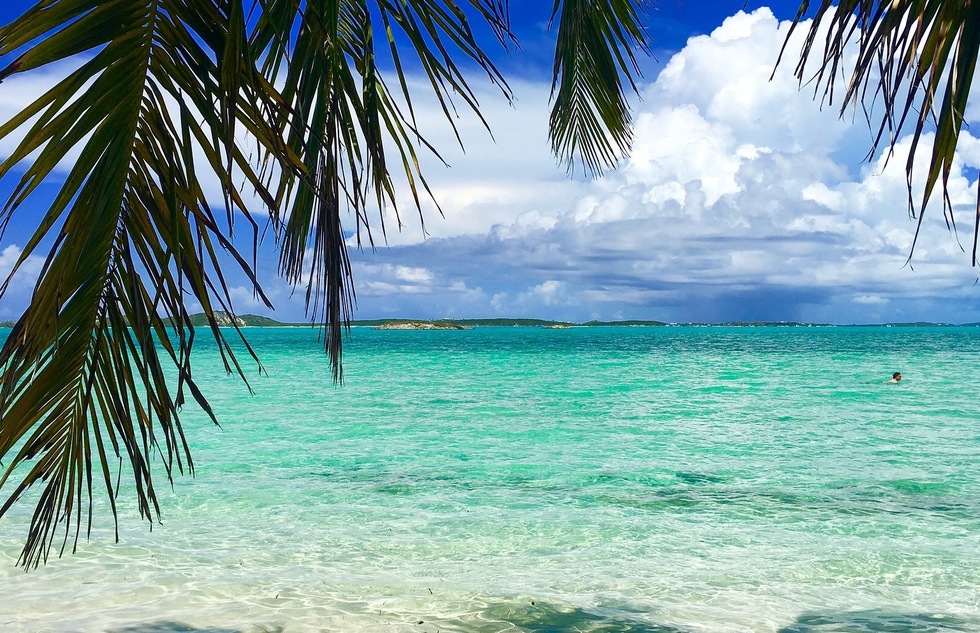 Which Bahamas Island Is Right for You? Use Our Paradise Picker

There are 700 islands in the Bahamas, and you’d be hard-pressed to find a bad-looking one in the bunch. Incredibly clear turquoise waters and pristine beaches in shades of pink and white are the norm here. As for the weather, for much of the year it’s like Mother Nature somehow turned the ideal thermostat setting into a country. But although the islands may be uniformly beautiful, that doesn’t mean they’re all the same. (Also, many of the 700 are uninhabited and so small they're not much more than sandbars.) Finding the best speck of paradise for you depends on what you’re into—seclusion, adventure, history, culture, or the poetry in motion that is a swimming pig. And if you’re into more than one of those Bahamian specialties, congrats! You’ve got an excellent excuse for coming back. 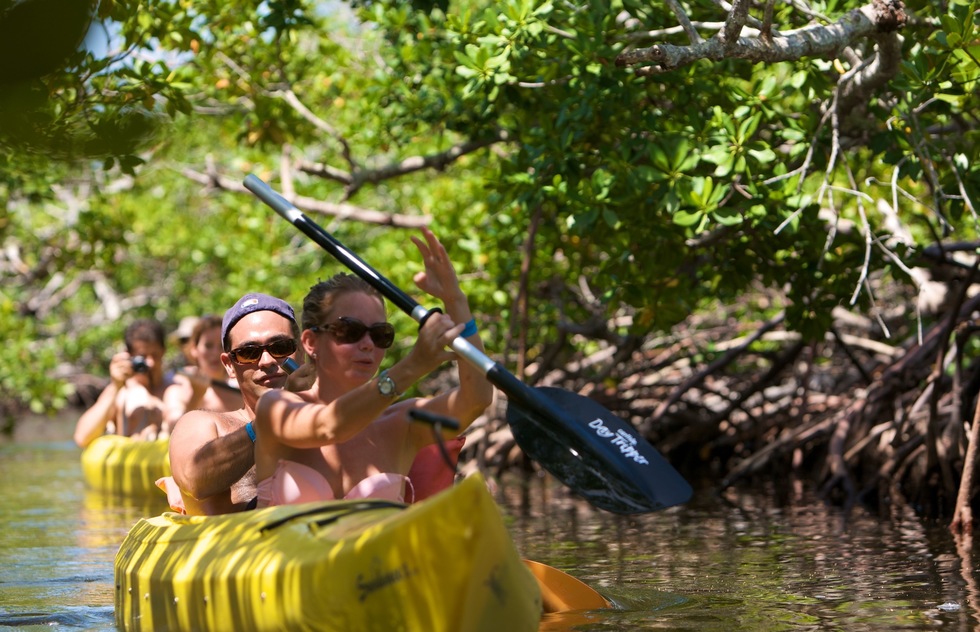 Bahamas Ministry of Tourism
If You Crave Adventure . . .

Andros is the largest island in the Bahamas, and it has the country’s most government-protected land. Throw in a considerable amount of biodiversity—from interior wetlands to one of the planet’s longest fringing coral reefs off the coast—and you’ve got yourself an irresistible destination for diving, kayaking, hiking, and other sorts of wilderness exploration. The island’s numerous blue holes are inhabited by cavefish and, according to legend, an enormous octopus-like sea monster called the Lusca.

For outdoor adventure closer to major tourist resorts, try Grand Bahama Island. Here you can swim through huge underwater caves, traipse through forests with 18 bird species found nowhere else in the Western Hemisphere, and paddle through mangrove forests in Lucayan National Park (pictured) near Freeport, the country’s second city. The Berry Islands group, located between Grand Bahama Island and Andros, is best known for two private islands owned by Norwegian Cruise Line and Royal Caribbean. But there are dozens of other secluded cays where you can go snorkeling, sport fishing, and diving at shipwreck sites. 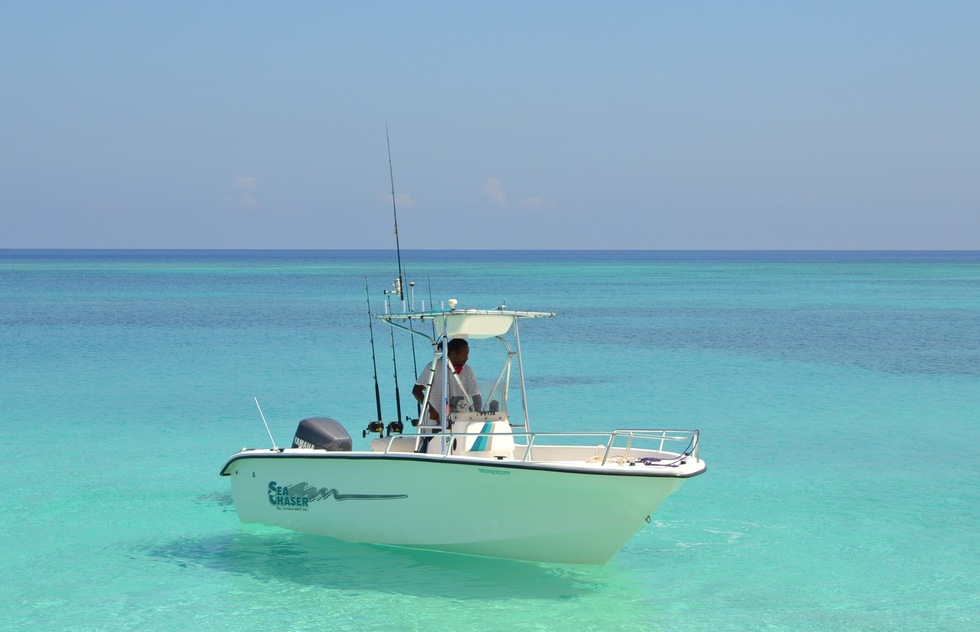 Some of your best opportunities for having the sand and surf all to yourself are located in the southeastern corner of the archipelago. On Acklins and nearby Crooked Island (pictured), as well as on Mayaguana and Rum Cay, you won’t find any big resorts on the beaches—in fact, you might not find any footprints on them. That leaves you free to discover Rum Cay’s ancient cave drawings, go crabbing on Mayaguana’s Horse Pond Beach, and snorkel in Crooked Island’s Turtle Sound, all in blissful solitude. When you do encounter people here, they’re more likely to be locals than tourists. In quiet fishing villages, you can get to know them over fresh seafood dishes like cracked conch and bonefish caught nearby. 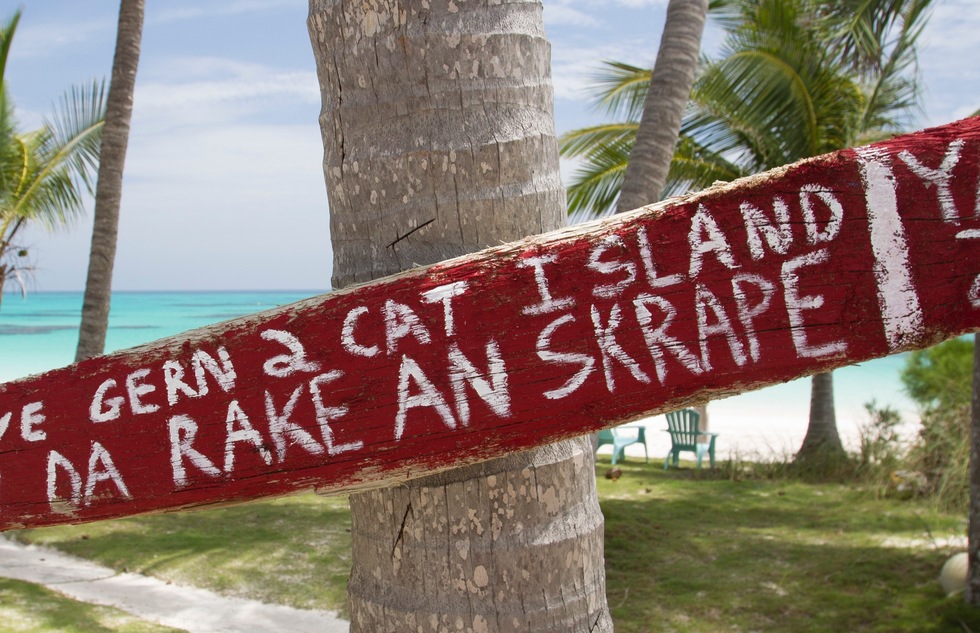 Bahamas Ministry of Tourism
If You Have an Interest in Local Culture . . .

Cat Island—which was named after pirate Arthur Catt, not felines—is recognized as the birthplace of Bahamian rake-and-scrape music. This lively, homemade art form was created by locals using whatever instruments they had around (accordions, banjos, goatskin drums) or could improvise from handsaws, washtubs, and fishing line. You can listen and dance to rake-and-scrape today at Cat Island’s bars and resorts and at a festival featuring the country’s best musicians each June. Other claims to fame here (beyond a collection of unspoiled beaches) include the hometown of actor Sidney Poitier, whose parents owned a farm in Arthur’s Town; and the Hermitage, a monastery carved from rock on Mount Alvernia, the country’s tallest peak at only 206 feet above sea level. 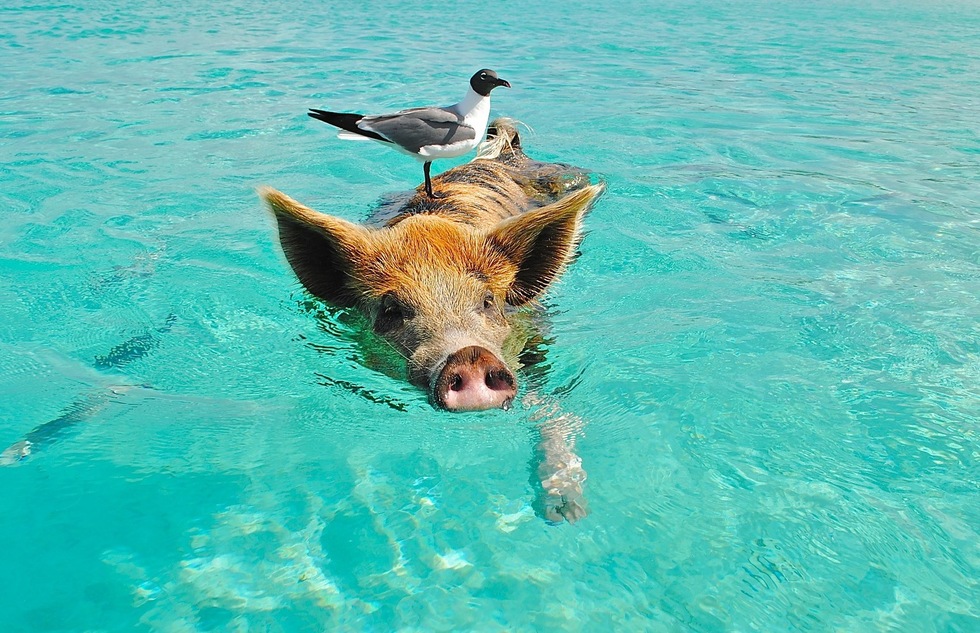 The undisputed scene stealers of Bahamian tourism in recent years have been a small herd of swimming swine on Big Major Cay in the Exumas. Nobody knows how the animals got there, but for years, they’ve been doggy-paddling—er, piggy-paddling out to arriving boats, expecting to be fed by delighted tourists. If swimming with pigs is a dream of yours, you might want to make it happen as quickly as possible: Access could soon be restricted, following the deaths in early 2017 of several pigs that had ingested too much sand while snorting up snacks thrown to them on the beach. For birders, meanwhile, a must-see spot is the Bahamas' southernmost island, Inagua, which is home to more than 140 avian species, including rare parrots, ducks, hummingbirds, and a huge flock of flamingos. 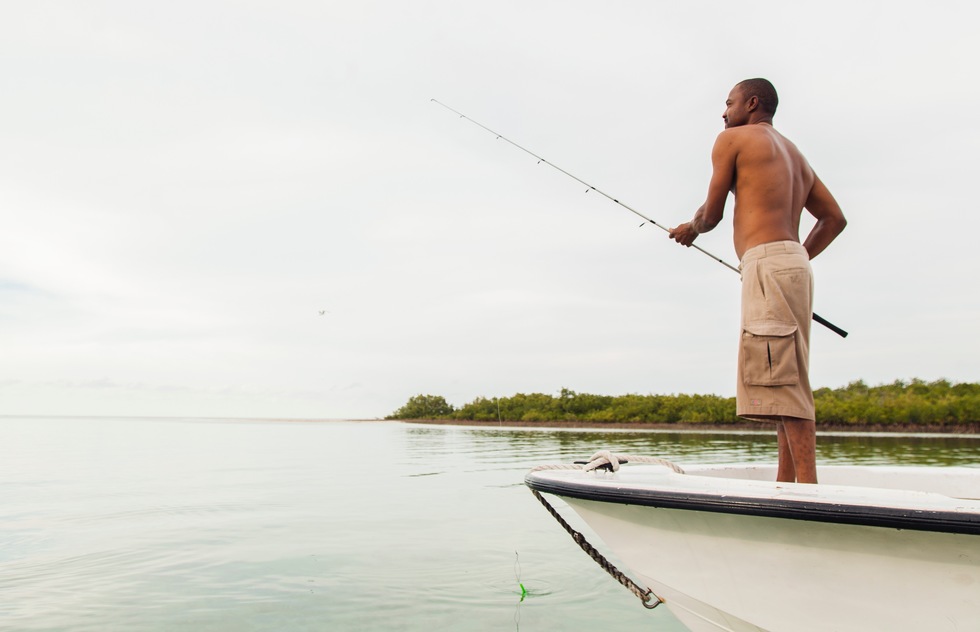 Bahamas Ministry of Tourism
If You'd Rather Be Fishing (Or Boating) . . .

The Abacos in the northern Bahamas are a 120-mile-long chain known as one of the world’s great boating capitals. Calm waters, protected harbors, and a number of full-service marinas attract those with their own yachts and motorboats, as well as lubbers opting for fishing charters, sunset cruises, and island-hopping excursions. On dry land, head to Man-O-War Cay to watch craftsmen build boats the traditional way—without blueprints. On the other side of the Bahamas, south of the Exumas, remote Ragged Island is a prime fishing location. You can cast a line here for grouper, barracuda, snapper, and more.

Pictured above: a fisherman in the Abacos 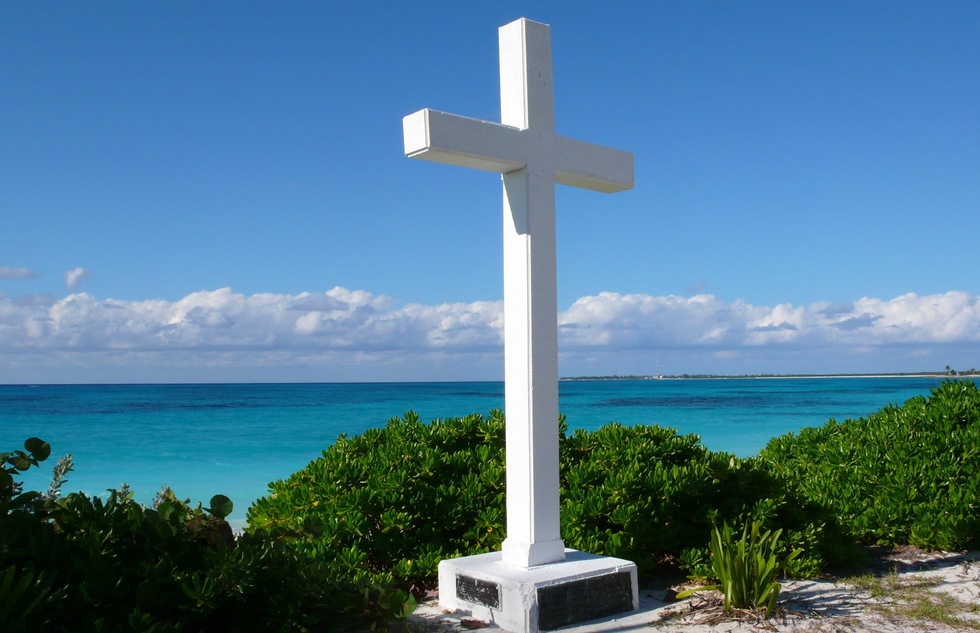 Bahamas Ministry of Tourism
If You Dwell on the Past . . .

There are fascinating historical traces throughout the Bahamas, in caves decorated with drawings left by native peoples, at ports and coves once frequented by pirates, and among the ruins of plantations where slaves were forced to labor, in the decades before the islands became a safe haven for freed slaves in the early 19th century. One place, however, lays claim to an event that changed the whole world forever: The hilly isle of San Salvador is believed to be the location where Christopher Columbus first made landfall during his 1492 voyage. Today a big white cross at Long Bay (pictured above) marks the spot.

Another site of historical interest, particularly for Americans, is Bimini, which floats in the Atlantic just 50 miles east of Miami. Rum runners trafficked in illegal booze here during Prohibition, Ernest Hemingway lived and fished in Bimini in the 1930s, and Martin Luther King worked on his Nobel acceptance speech during a visit in 1964. Bronze busts honoring King are mounted at the Bimini Craft Centre in Alice Town and amid the mangroves near the Healing Hole, a freshwater pond said to have restorative properties. 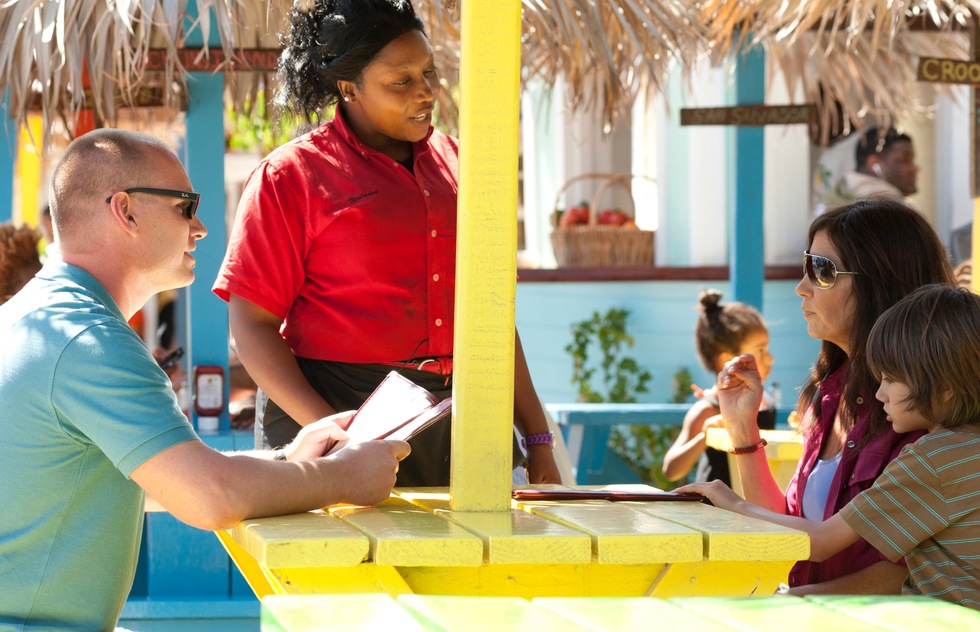 Bahamas Ministry of Tourism
If You're a People Person . . .

The biggest resorts and the biggest crowds are on New Providence, a perennial pit stop for cruise ships and the location of the Bahamas’ capital and largest city, Nassau. Restaurants, shops, nightlife, souvenir stands, and all the other byproducts of tourism development are here in abundance. Much of the action geared toward visitors is actually centered on nearby Paradise Island, where the gigantic Atlantis resort offers a casino and water park close to jam-packed beaches. To learn more about the city and the Bahamas in general, visit the Pirates of Nassau museum, dedicated to chronicling the glory days of buccaneering, and the Pompey Museum, which recounts the rich history of Africans in the islands, from colonial slavery to the present. 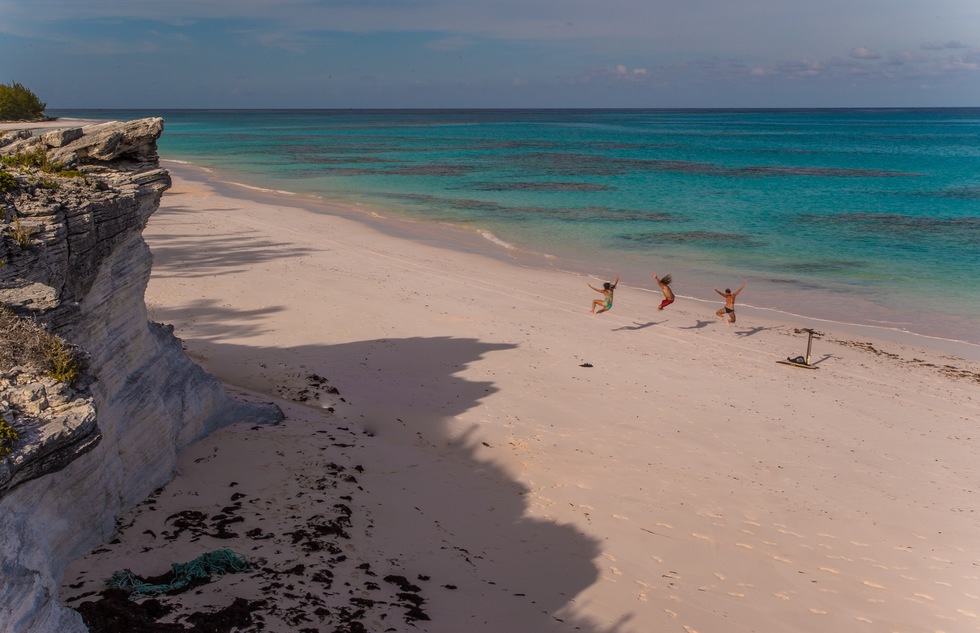 Bahamas Ministry of Tourism
If You Want to Be Dazzled by Coastal Scenery . . .

To be honest, you could throw a dart at a map of the Bahamas and you’d more than likely hit an island with stunning views. But the most dramatic coastline probably belongs to Long Island—which is fitting because at 80 miles long and only 4 miles wide, it’s pretty much all coastline. There’s a lot to marvel at along the way. The western side’s calm sandy beaches contrast with the east’s crashing waves, craggy cliffs, and huge caves, including Dean’s Blue Hole, an enormous underwater sinkhole that reaches a depth of more than 600 feet. The best showcases for the Bahamas’ famous rose-tinted shores are Harbour Island’s 3-mile Pink Sands Beach and nearby Eleuthera (pictured), where stretches of pink and white sand border lush pineapple farms and charming villages with architecture recalling New England.