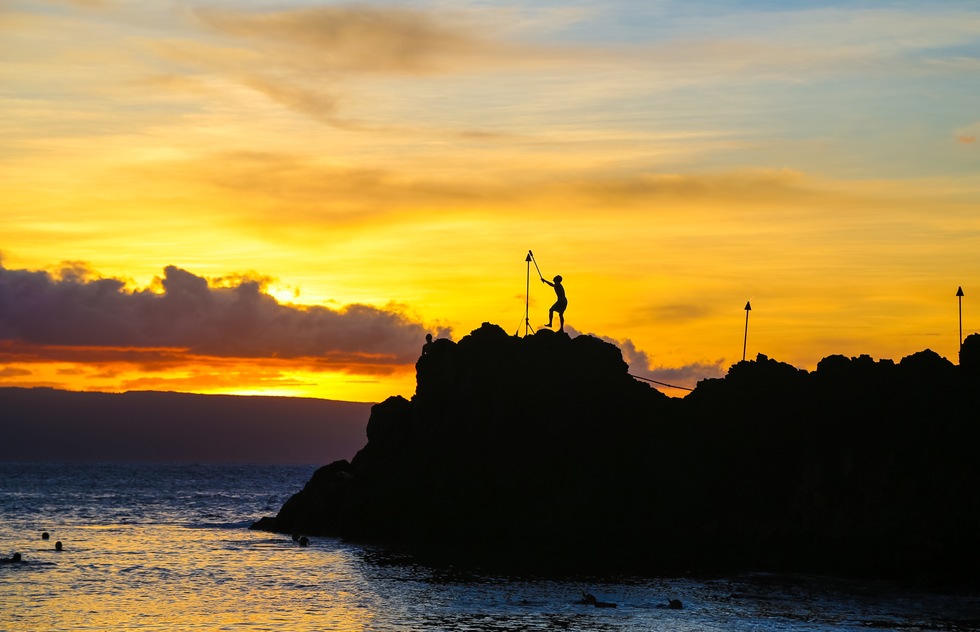 Hotels can be destinations, too, and sometimes checking into a historic property is reason enough to travel. From afternoon tea at the Ritz in London to the obsessive polishing of the cashiers' coins at San Francisco's Westin St. Francis, often it's the long traditions of the world's great hotels that set the tone. At these important resorts around the planet, guests and visitors alike are invited to take part in regular rituals, most of which have been going on for decades (like the torch lighting at the Sheraton Maui, pictured above). Some of these hotels' regular events have been tourist attractions longer than the ones outside their doors in the cities they serve. 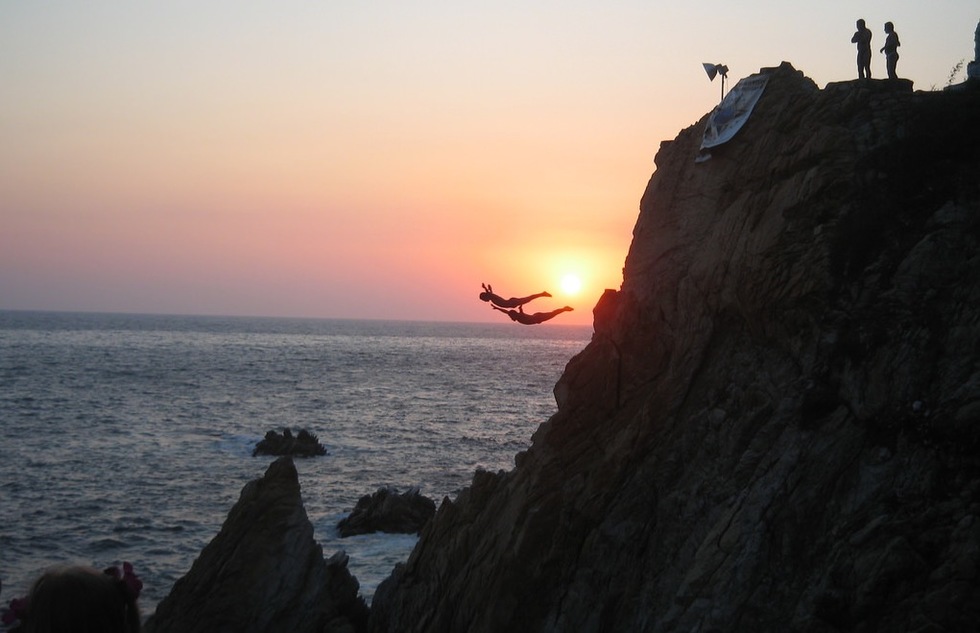 Unfavorable headlines may have taken the shine off Acapulco's star, but one tradition has held constant since its heyday as a Hollywood haunt: its cliff divers. In the late 1940s, Swiss-born bandleader Teddy Stauffer hired some local daredevils to perform for guests across from his hotel's cove-facing nightclub, La Perla. The trick worked its magic, because Acapulco brought in the A-listers—including Hedy Lamarr, who came to see the show and married Stauffer. Every evening, the Hotel Mirador relives the glory years depicted in the aging black-and-white celebrity photos lining its walls. The world-famous La Quebrada Cliff Divers still titillate and thrill audiences at La Perla with daily shows during which scantily clad young men gracefully throw themselves 100 ft (30 m) to 135 ft (41 m) off a series of ever higher cliff edges. For tourist-strapped Acapulco, it remains big business—the group is so well-known in Mexico that some of the La Quebrada Cliff Divers have become celebrities in their own right, and the group's name is registered as a trademark. You don't have to stay at the hotel to gasp at the feat—the athletes perform in the daytime for cruise ship excursions, too. 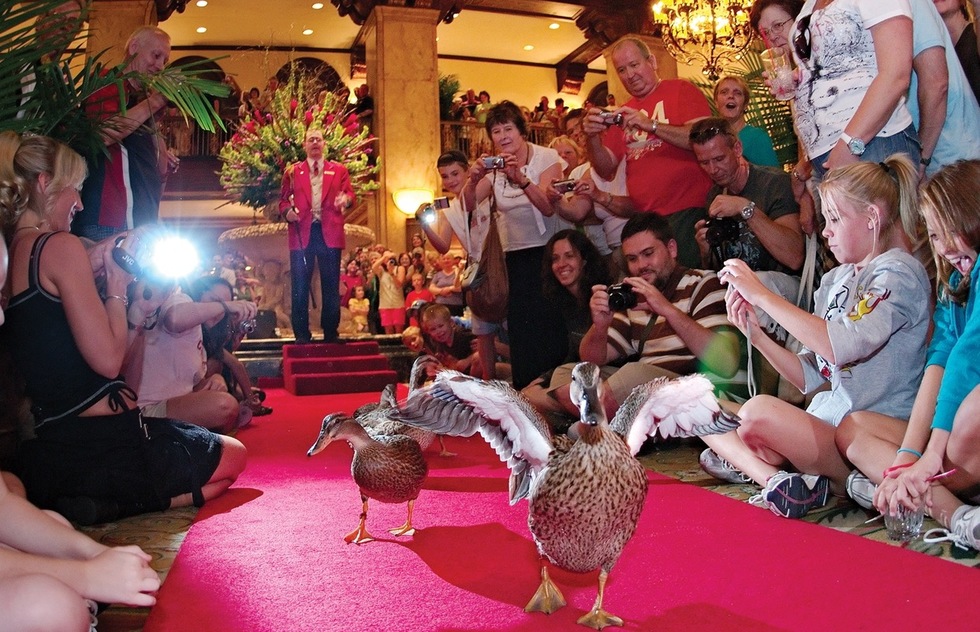 Sometime in the 1930s, it's said, a few hotel employees got drunk on Tennessee whiskey and slipped some ducks into the lobby fountain of the Peabody Memphis. Back in an age when businesses regularly used cheap publicity stunts to drum up attention—aren't you glad those frivolous days are over?—the Peabody decided the ducks should become a permanent fixture and asked the bellman, a former circus trainer, to escort them. Now, every day at 11am, as John Philip Sousa's “King Cotton March” strikes up, the resident mallards emerge from one of the elevators with the prodding of the hotel's official "Duckmaster." The waterfowl waddle down a red carpet into the fountain, where they splash contentedly in front of guests all day. At 5pm, they're escorted back down the carpet to ascend to their penthouse. Out of respect, the hotel's French restaurant refuses to put duck on the menu—here, the ducks serve the hotel and not the other way around. 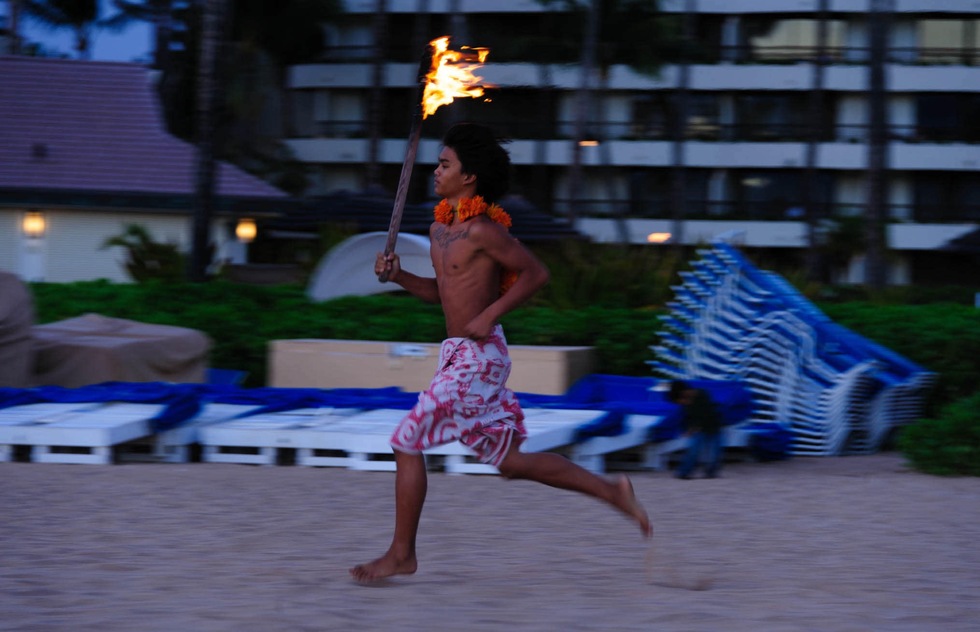 About five minutes before sunset each evening at the Sheraton Maui Resort and Spa, dusk is heralded by this festive mini party with hula, live music, the arrival of a running torch lighter, and his spectacular head-first dive off Black Rock (known to Hawaiians as Pu’u Keka’a). The ritual honors "the legendary leap of the last chief of Maui, Kahekili," the late-1700s monarch who is said to have tested his warriors' mettle by challenging them to follow him off various cliffs of Hawaii. This beloved staple has been going on since 1963, when it was no doubt encouraged in part by the diving success at Acapulco's El Mirador. You don't have to stay at the resort to take part—people line the torch lighter's route on Kaanapali Beach as he makes his way. 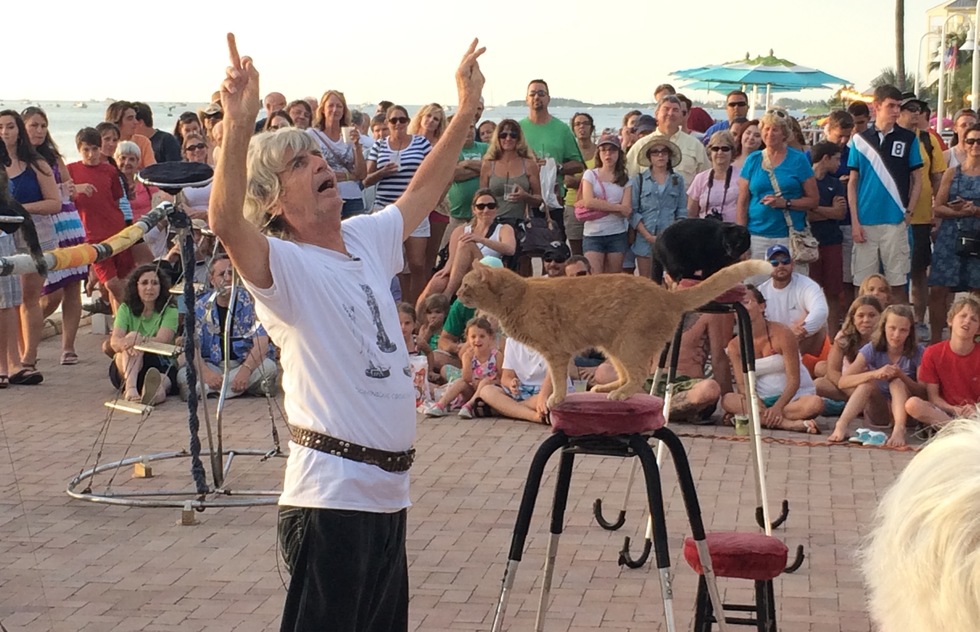 Back in the 1960s, Key West, Florida, was at the end of the road—literally and figuratively. Hippies from across America took over the broken-down fishing town to drop out and live their art. Every evening, they'd gather on the dilapidated dock at Mallory Square to bid farewell to the sun in a nightly jam of music and performance. As tourism took root and gentrified the island, the hippie gathering got an official name, Sunset Celebration, and performers were required to prove their abilities to the city before being allowed to join. "Dominique the Cat Man" (pictured above) has mounted stunt shows with trained housecats here since the 1980s. By the 1990s, Key West's Sunset Celebration spilled over to the waterfront of the newly built hotel next door. Then a Westin, that property became in 2017 the Margaritaville Resort & Marina—a brand invented by Jimmy Buffett, a young dropout who, all those years ago, used to hang out at Mallory Square to strum simple island songs to the sunset while sitting on an upturned bucket. Many of the island's changes came about because of him, and the sunset bacchanal is now a feature of his empire. 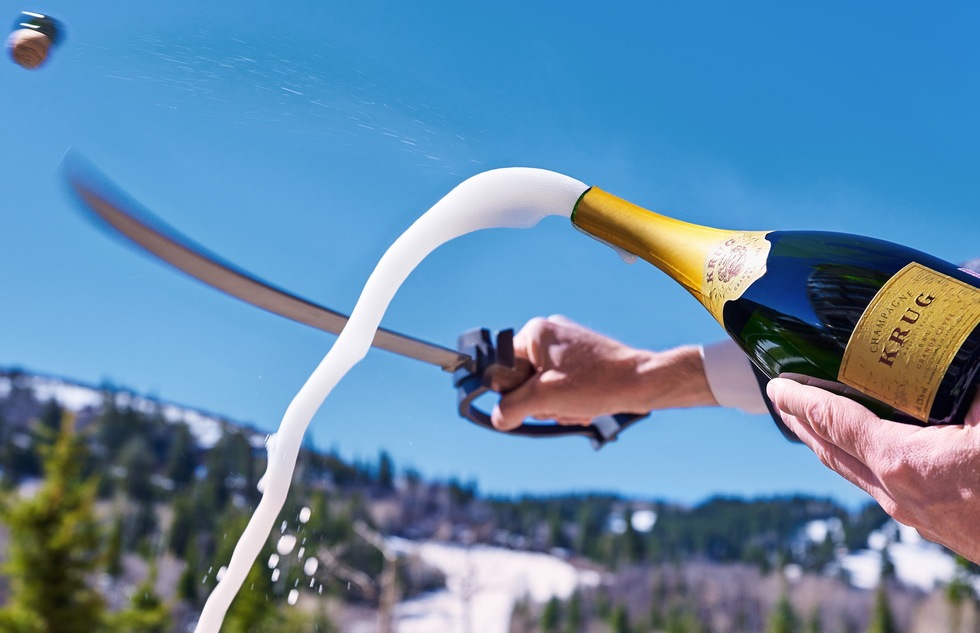 In a stroke of haute hospitality that's actually useful, nearly every St. Regis resort kicks off the evening with a bit of sabrage, a two-century-old skill in which a champagne bottle is hacked open by a sword. In this case, the swords are silver and handmade by Christofle's Haute Orfevrerie workshop in Yainville, Normandy. Stewards are trained in the skill, in effect decapitating the bottle so guests can get at the good stuff quicker. (Which is handy after a long day of skiing at, say, the St. Regis Deer Valley in Park City, Utah, pictured above). The hotel will even sign guests up for lessons so they can also learn to chop their fizz. The tradition started when John Jacob Astor IV opened the first St. Regis in New York City in 1904, eight years before he went down with the Titanic. Ironically, the Manhattan property is the only one that doesn't do champagne sabering anymore—the place is too crowded to brandish swords safely. But it's okay: The New York hotel's emblem is engraved into every other St. Regis saber so that the originator remains represented. You may purchase a sword for yourself; price available on request, which means you should probably just stick to a glass of bubbly. 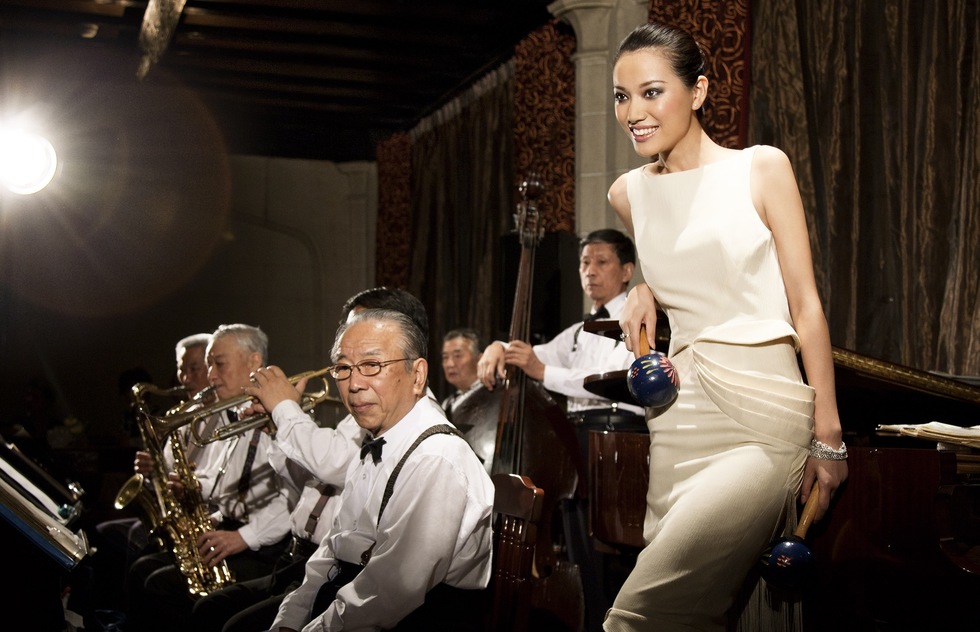 In Shanghai, the glamorous Cathay Hotel rose in 1929 and instantly became an icon of style and high society, world-famous for its views over the Huangpu River and its cutting-edge swing band. The Art Deco hotel has lived many lives since then; today it's called the Fairmont Peace. And somehow, despite government suspicion and shifting mores, the jazz band endures. The average age of the musicians is well into the 80s—some of them started playing during the hotel's heyday in the 1940s, while others are the students and children of the original guard. The Old Jazz Band performs nightly and occasionally serenades the hotel's afternoon tea (there's dancing, too). This is thought to be the oldest jazz band on Earth, and has even been the subject of a documentary, As Time Goes by in Shanghai. 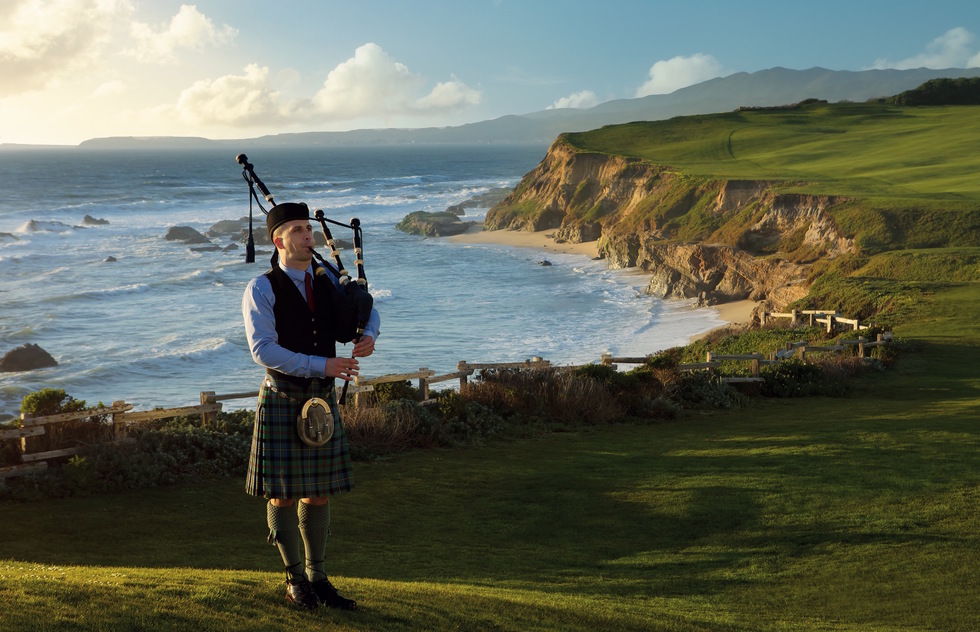 Five evenings a week, as guests relax in the back garden of the Ritz-Carlton Half Moon Bay, sipping cocktails by the fire pits, a bagpiper joins them and approaches the precipice overlooking a sensational view of the Pacific Ocean about 30 miles south of San Francisco. As the day's sun begins to simmer into the sea and champagne bubbles pop, the bagpipes bid adieu to the day with music. The Scottish twist on the classic sundowner seems appropriate for a resort built around another Scottish tradition, golfing. 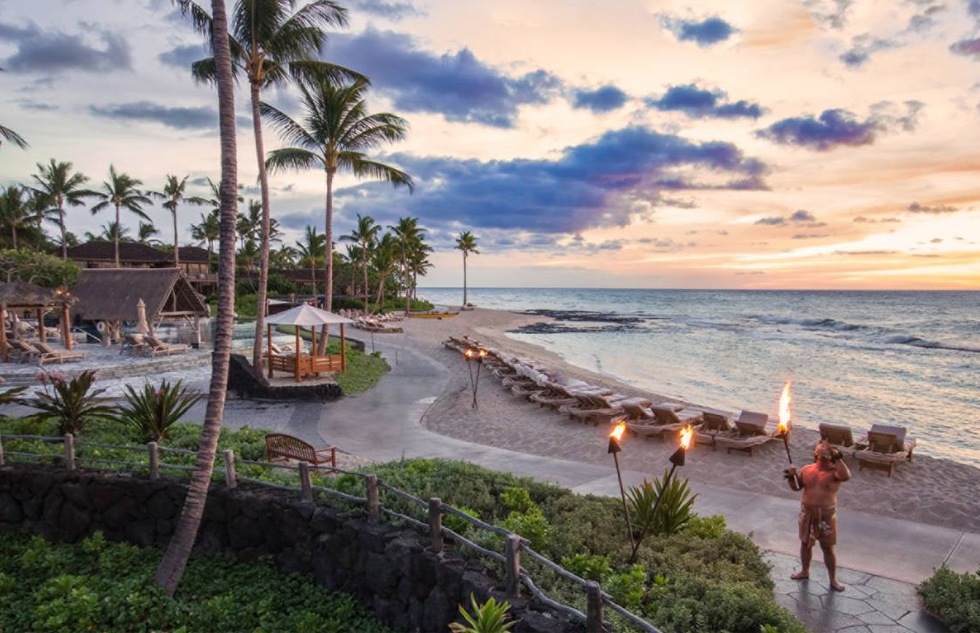 You might have figured out by now that sunset rituals are a big thing for hotels. It makes sense—the cocktail hour is a sweet spot since guests have usually just returned from exploring off-property and are about to begin dining and sleeping. As it has done since opening in 1996, the Four Seasons property at Hualalai on the Big Island makes a big to-do of the close of the day's sunbathing and hiking by sending out a young shirtless Hawaiian stud in traditional dress to announce the coming evening by blowing on a seashell and running around with a flame to light all the tiki torches on the grounds. Sometimes, like the Pied Piper of sunsets, he gathers a trail of vacationing children on his rounds. Torch lighting is a tradition at all Four Seasons resorts in Hawaii, including on Lanai and Maui. 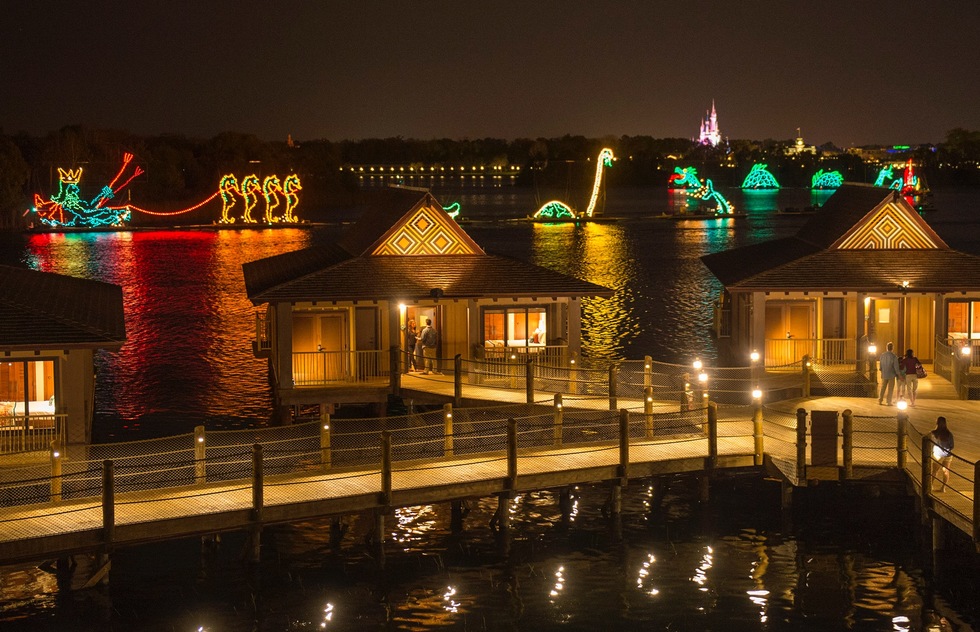 Initiated the very same month that Walt Disney World opened in 1971, the Electrical Water Pageant is one of the few aspects of the resort that hasn't changed much in a half-century. For three generations, kiddos from around the world have peeked out their hotel room windows just before bedtime to catch this free boat parade. While speakers play a chipper, electro-synth soundtrack, guests of the water-facing resorts on Seven Seas Lagoon and Bay Lake watch a gentle procession of illuminated sea creatures, including a cheerful serpent that requires four separate floats. At the last moment, all the lights switch to American flags and stars while "It's a Grand Old Flag" kicks in. It's hokey, it's low-tech—and it's an icon of childhood for millions. 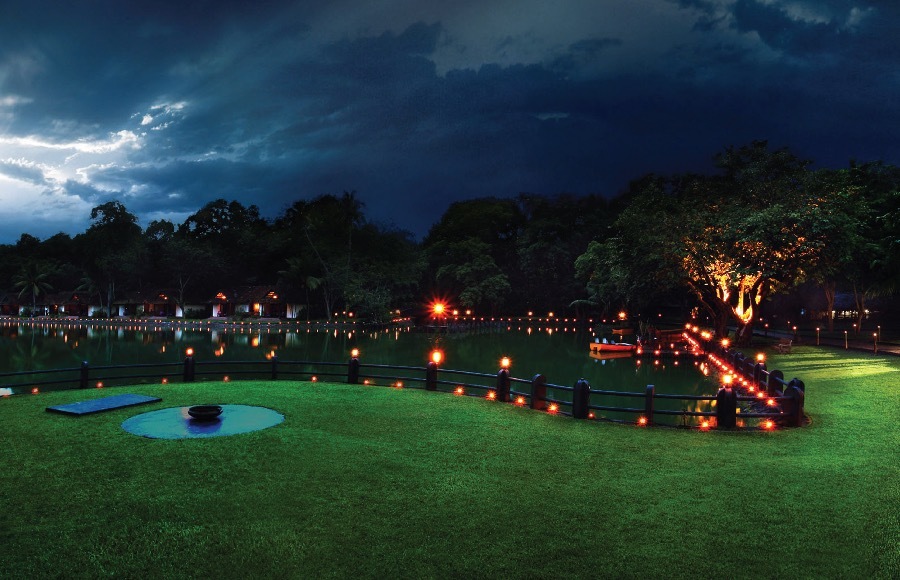 In some Indian cultures, the lighting of a lamp signifies one's progression out of darkness into enlightenment. So the Vivanta by Taj resort at Kumarakom, a tranquil and exclusive bungalow property on Lake Vembanad among the coconut trees and rice paddies of Kerala, made a nightly ritual out of the lighting of some 1,000 lamps. The task is given to women from area villages so that the resort, which costs from around $450 a night, can spread the wealth—guests are invited to help the women in solidarity as they work symbolically to travel from ignorance to knowledge. This ritual is new (Vivanta was born as a brand only in 2010), but its objectives are aimed at the long term.