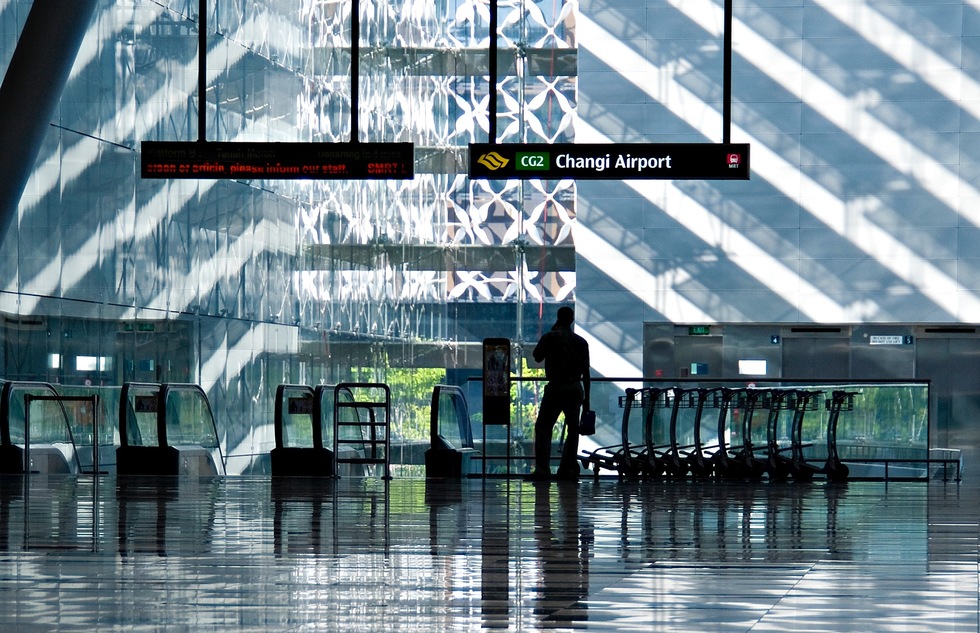 Because an airport is a means to an end—never a destination in its own right—it’s usually judged by how efficiently it lets you leave the premises or by how effectively it distracts you from the fact that you’re stuck there. It’s safe to say that for most of us, expectations are low, scarred as we are by memories of never-ending layovers and post-apocalyptic conditions at terminals of the damned such as at Paris Charles de Gaulle and New York City’s LaGuardia.

Well-designed, well-organized airports with excellent amenities do exist in the world, however—and not just in Asia (although, okay, they’re mostly in Asia). Here are 10 terrific takeoff spots that will send you briskly on your way or, when flights are unavoidably postponed, make delays downright pleasant.

Most airports are about as relaxing as a prison riot. But Dubai International Airport can be remarkably calming, even as the facility inches up the list of places with the busiest flight schedules. There are growing issues when it comes to full gates forcing flights into tarmac deplaning, but inside the building, life can be a dream. In addition to spas and massage stations at every turn, there are igloo-like sleep pods as well as slightly bigger SnoozeCubes, all with reasonable hourly rates to help you recharge during a layover (well, reasonable if you’re okay with paying to take a nap). Those who aren’t traveling on a business-class budget can partake in the chilled-out atmosphere, too; there’s no charge for spending some quiet, mind-clearing moments amid the lush greenery and trickling streams in the zen garden. And if you’re not feeling drowsy, you can always indulge in some luxe duty-free shopping or log onto a free Wi-Fi network lauded for its speed. 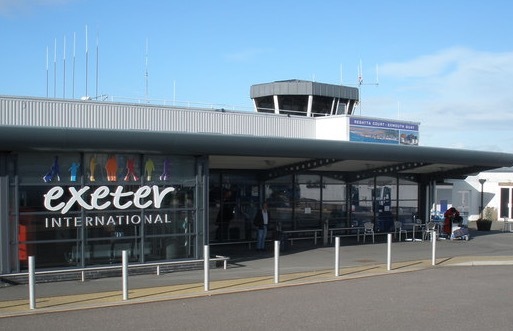 They may not have fancy shops and gourmet restaurants, but small airports in England and Wales consistently outscore behemoths elsewhere on customer satisfaction surveys. As a matter of fact, according to data collected at 160 airports by HappyOrNot—makers of those smiley/frowny face consoles that let passengers rate services with the touch of a colored button—tiny Exeter Airport in Devon had the world’s happiest customers in 2017, scoring a satisfaction rate just shy of 89%. What’s more, three other U.K. airports of manageable size also cracked the top 10: Newcastle International Airport in northeast England at number five, London Southend Airport (actually about 40 miles east of London in Essex) in sixth place, and Wales’s Cardiff Airport in seventh.

Flyers rated all of those spots highly for their efficiency and service, even in the most stressful parts of an airport, like security and baggage claim. Of course, it helps that smaller airports handle only a fraction of the traffic that passes through London’s Heathrow or Gatwick every day. But travelers looking for a no-muss, no-fuss gateway to Exeter’s famous Gothic cathedral, Newcastle upon Tyne's vibrant arts scene, kid-friendly fun at Southend-on-Sea, or the revitalized waterfront in Cardiff should take heed of their crowd-pleasing facilities. 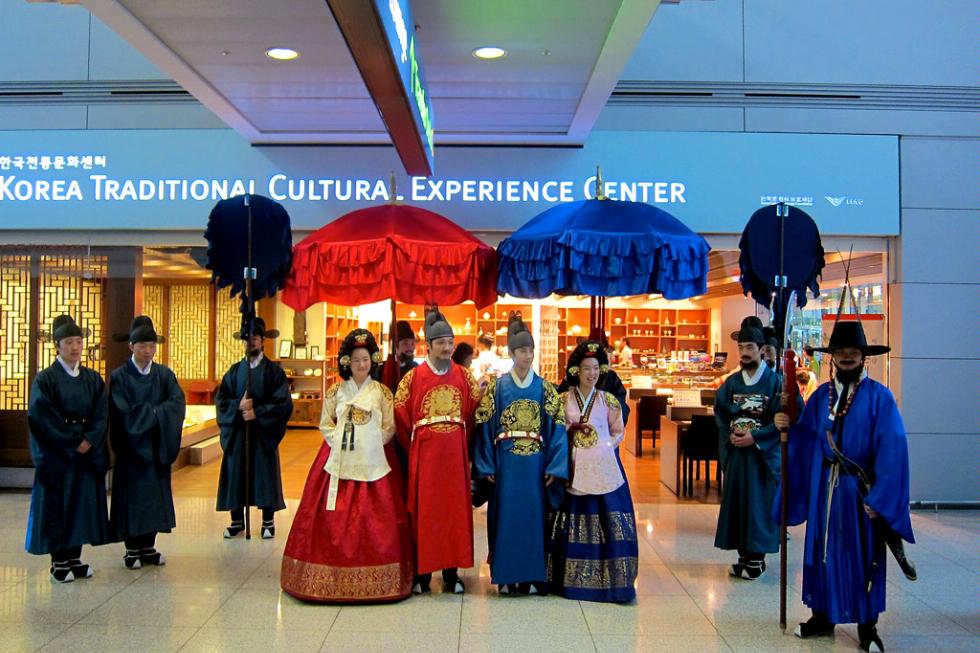 “Fun airport” might sound like an oxymoron akin to “no-fault divorce” or “economy-class legroom.” But even the grouchiest traveler can have a good time at this spotless, friendly, and extravagantly kitted-out airport serving Seoul. Entertaining amenities include an indoor ice skating rink, a spa with sauna, a casino, and a golf course (the latter two require a free, 5-minute shuttle ride). You can also get to know Korean culture better—there are abundant local food offerings, museum-quality art exhibits, and even traditional dance performances and ceremonies like the one pictured above. Getting to South Korea’s capital city is easy, too. The terminals aren’t even in Seoul, but a zippy high-speed train will get you there in under 45 minutes—a trick U.S. cities can’t seem to approach let alone master. 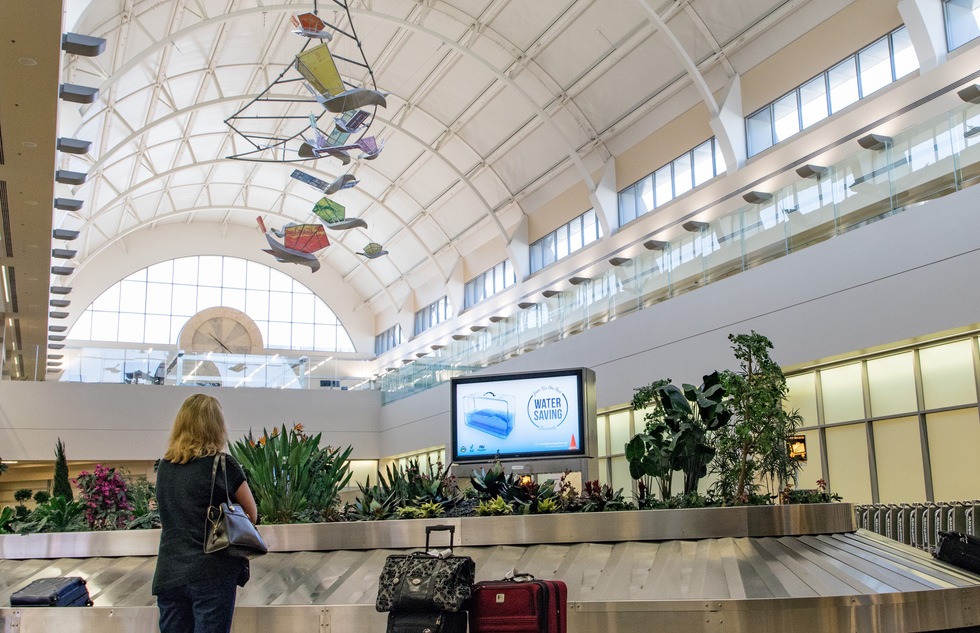 The United States lags far behind other wealthy nations when it comes to airports. A journey from Seoul to LAX can feel like a fall from a gleaming utopia to a Kafkaesque nightmare. There are bright spots, though, such as this polished gem in Orange County. Thanks to the airport’s convenient location, Disneyland is only a short drive or shuttle ride away, but a thoughtful effort to lower travel stress banishes all signs of Mousey madness here. Subtle, serenity-enhancing features include a color palette of soothing earth tones, a minimum of TV screens to reduce visual clutter, and less frequent—and less squawky—public address announcements than you'll hear elsewhere. The relatively laid-back approach, along with a wide-ranging array of dining options (many of local origin), helped the facility earn the top spot on J.D. Power’s 2017 customer-satisfaction ranking of large North American airports. 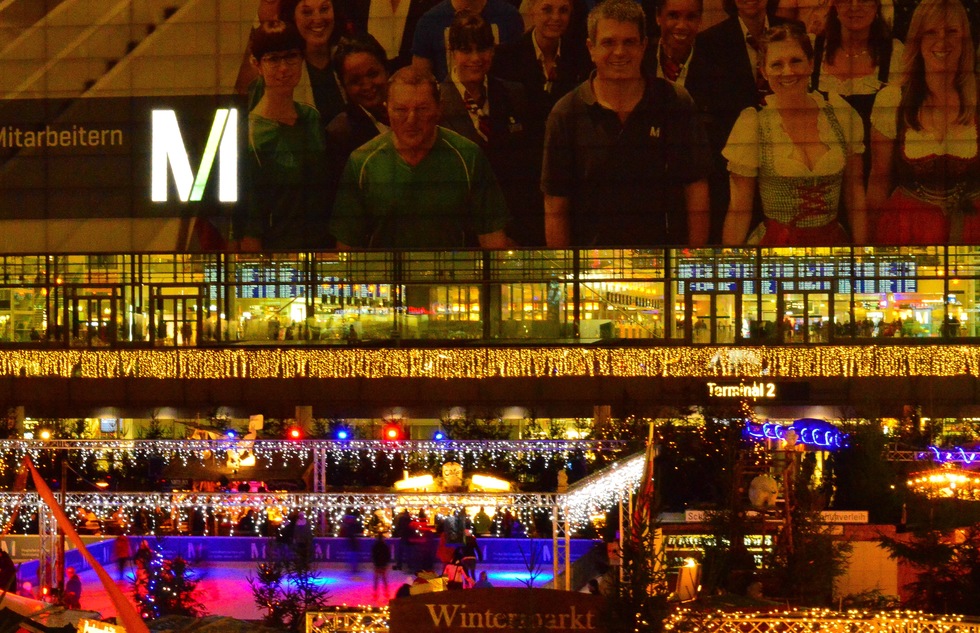 It has its own onsite brewery and a solid punctuality record (among large airports, it was tops in Western Europe and number 15 worldwide, according to 2017 data). What more could any German soul want? The rest of us are liable to appreciate Munich Airport’s bright, modern, glass-walled design; its easily navigable layout, made even easier by high-tech interactive informational kiosks; and special touches such as napping pods, a playground, and seasonal events including a Bavarian Christmas market (pictured above). It’s no wonder the hub has been named the continent’s best no fewer than 11 times—most recently in 2018—in the prestigious ranking of airports that Skytrax compiles each year, based on millions of passenger surveys. 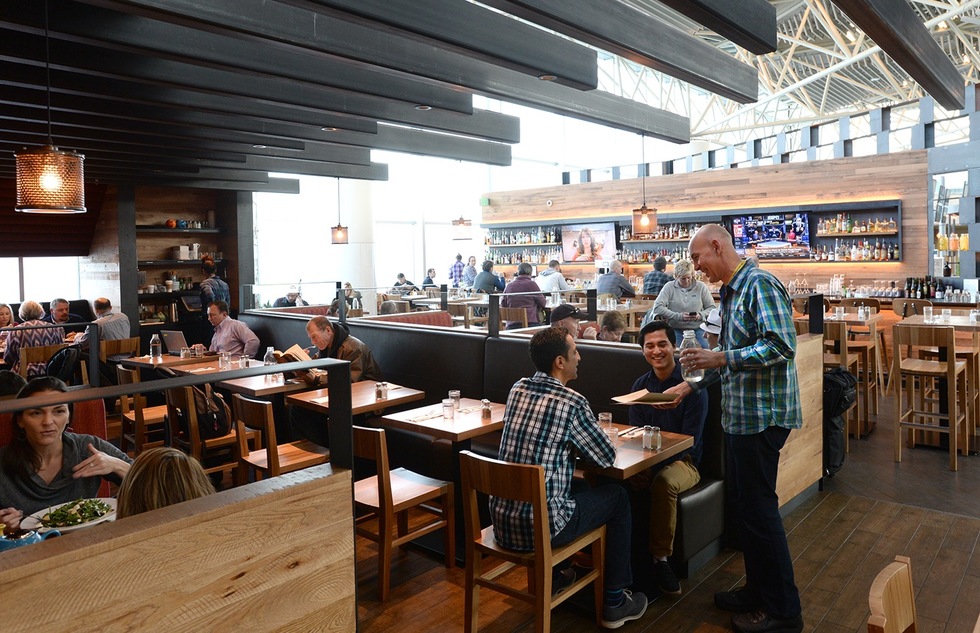 Few airports do as good a job of reflecting their regions as this award-winning facility in Oregon’s artsy, active axis of hippie-dippiedom. A slew of local restaurants have outposts at the airport, allowing passengers a chance to sample Portland specialties such as microbrews at Laurelwood Public House & Brewery, coffee at Stumptown Coffee Roasters, fried chicken at The Country Cat (pictured above), and donuts at Blue Star. You can also peruse new and used titles at Powell’s Books, one of the country’s best independent booksellers. Regional artists and musicians share their talents in rotating exhibits and live performances, and there’s a mini movie theater with free screenings. In addition to staying culturally connected to Portland, the airport is literally connected to it better than most U.S. hubs are linked to the cities they serve—speedy light rail will get you to the heart of town in just a little over half an hour. And, this being the bike-friendliest city on earth, there’s even a cycling path to the terminals as well as parking for two-wheelers. 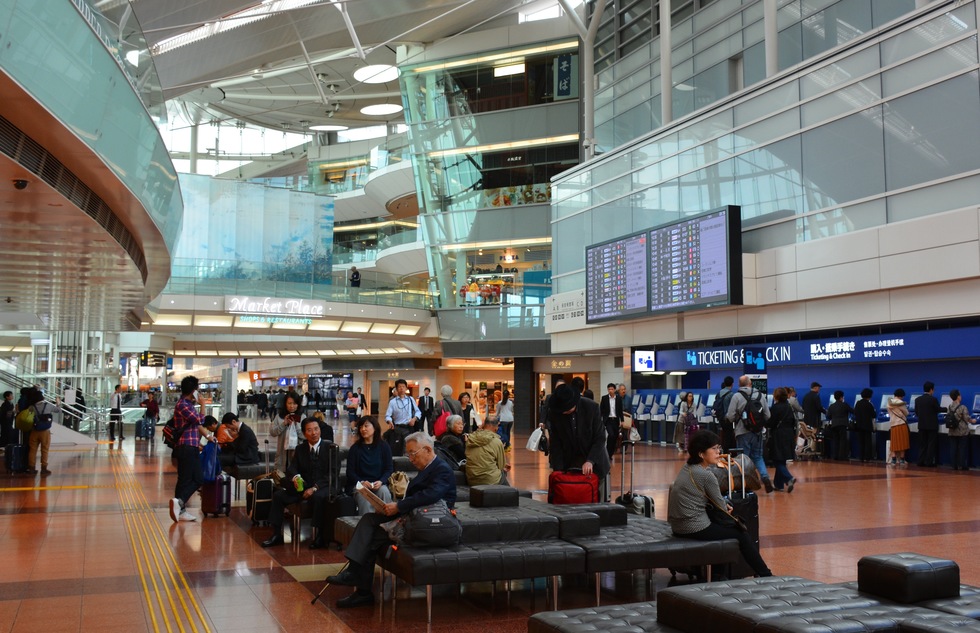 Among “mega airports”—defined by air travel punctuality tracker OAG as those that accommodate more than 30 million passengers per year—Tokyo-Haneda leads the way when it comes to leaving on time. An impressive 86.75% of flights stayed on schedule in 2017. So it’s not likely you’ll have to spend an extended amount of time here, but you’ll still appreciate the sparkling glow of the cleanest airport on earth, according to Skytrax's 2018 survey of the world’s flyers. Also astoundingly pristine and efficient: the rail system that will take you from the terminals to the center of Tokyo in no time. 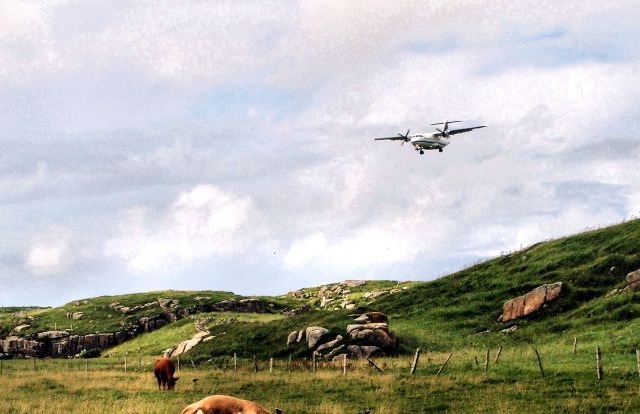 An annual poll conducted by jet-chartering site PrivateFly named itty-bitty Donegal Airport, located on the northeast coast of Ireland, as 2018’s most scenic spot for takeoffs and landings. What could this rugged outpost have to offer that’s more eye-popping than famously breathtaking sites in the Caribbean or on the French Riviera? We’ll let one of the poll’s voters take it away:

“You fly in low over the tiny airport building with the conical mass of... Errigal mountain on your right and sweep out over an emerald sea with the perma-white froth of the Wild Atlantic Way lashing the many tiny rocky islands in a turquoise sea. Then the pilot completes his turn and dashes back towards the crescent of golden sand that is Carrickfinn beach."

Incidentally, the airport only flies to two places (Dublin and Glasgow) so the scenery is the primary amenity. But begob and begorra, what scenery! 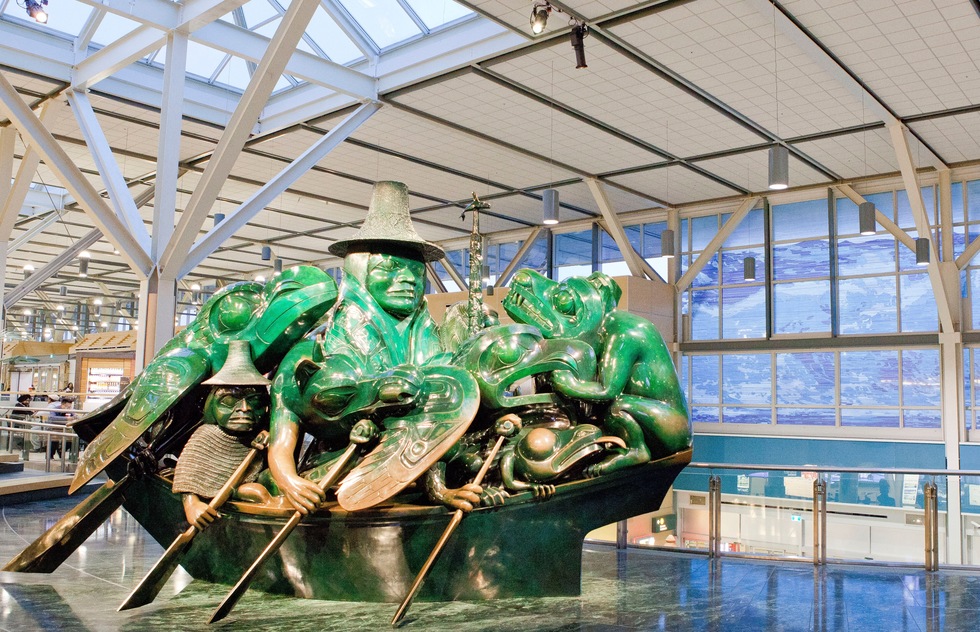 Leave it to Canada to design the globe’s most compassionate airport. Starting in the early 1990s, Vancouver officials determined to make this bright, clean British Columbia facility as accessible for travelers with disabilities as it is for everyone else. That goes beyond wheelchair-friendly ramps, restrooms, and elevators (though the airport has more of those than required by building codes). There are also low-mounted information monitors installed throughout the terminal, special “visual pagers” to help those with hearing impairments, and texture-coded flooring to direct those with limited vision. The airport also does a good job of honoring the province’s indigenous peoples with a huge collection of wooden sculptures and other works by native artists. Nearby northern Pacific Coast land- and seascapes are acknowledged with bold splashes of blue and green, a huge indoor waterfall, and an aquarium. 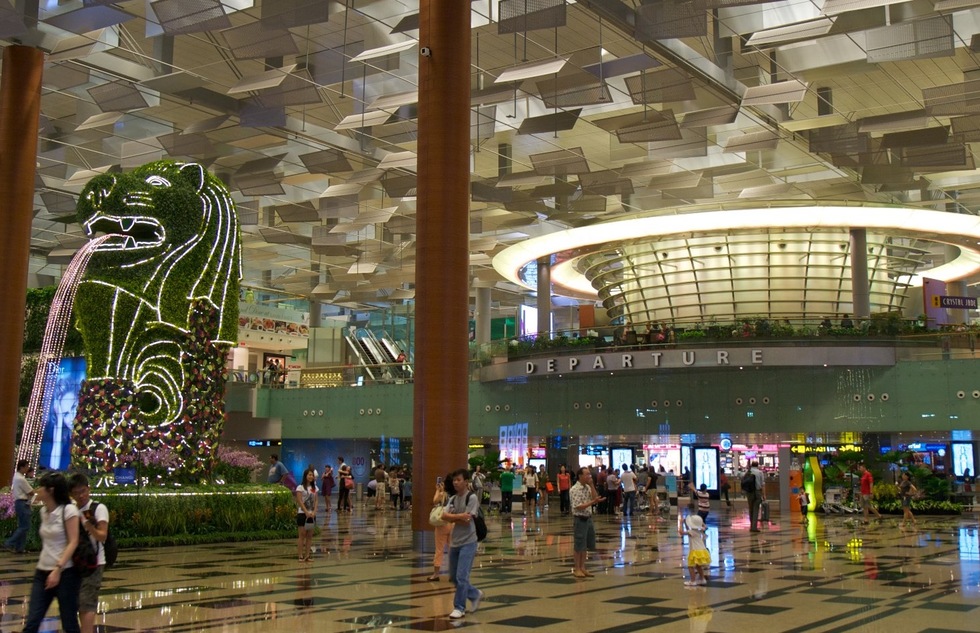 Singapore Changi Airport is like Meryl Streep—so good it doesn’t seem fair to make comparisons with others in the same field. In 2018, the Asian city-state’s incredible palace of air travel topped Skytrax’s survey ranking the world’s airports for an unprecedented sixth year in a row. Though the facility receives high marks for efficiency (no mean feat when you consider it serves 60 million passengers per year), it’s the leisure amenities that will make you want to miss your flight. They include a rooftop swimming pool, 24-hour movie theaters with free screenings, the tallest slide in an airport, video game lounges, and gardens dedicated to butterflies, orchids, sunflowers, and glass. Believe it or not, the place will get even better in 2019, with the opening of a new 10-story complex with a hotel, shops, restaurants, and a lush park outfitted with rope bridges, a hedge maze, and the world’s tallest indoor waterfall. In other words, it doesn’t look like the airport will be budging from that top spot anytime soon.

Which runways should you avoid? See our list of The Worst Airports in the U.S.