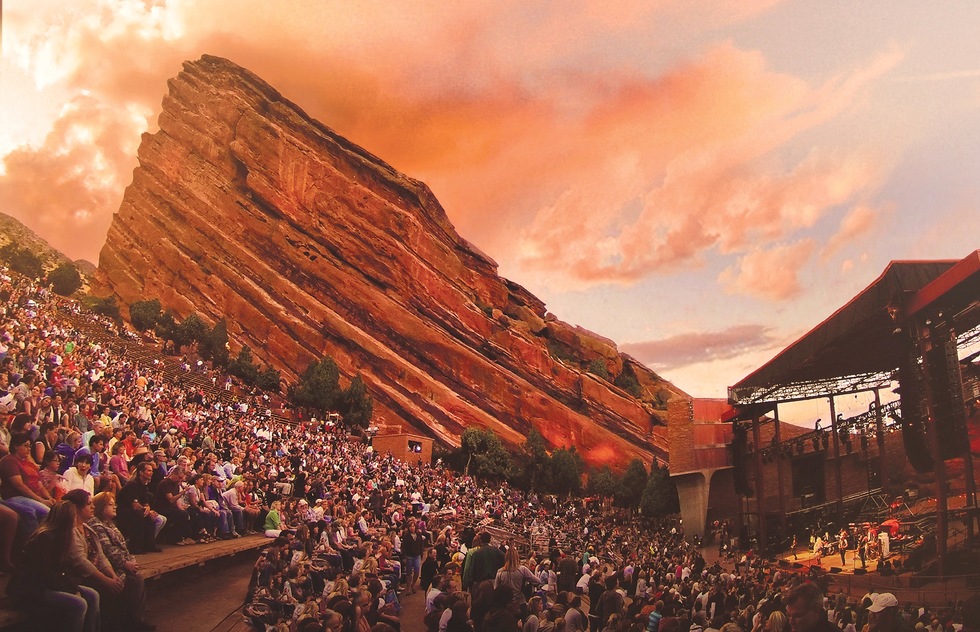 Your favorite band is finally touring. And while sure, you could catch them at the local arena, why not make it a full-throttle bash, a once-in-a-lifetime adventure? Yes, we’re talking open-air venues where Mother Nature is part of the jam, where natural acoustics one-up fancy sound systems, where stars and spacious blue skies add to the laidback vibe. If you see an act at one of these, it won’t be some run-of-the-mill concert. These are 10 outdoor theaters worth traveling for, where you can rock it au naturel, and spectacular surroundings are part of the performance. 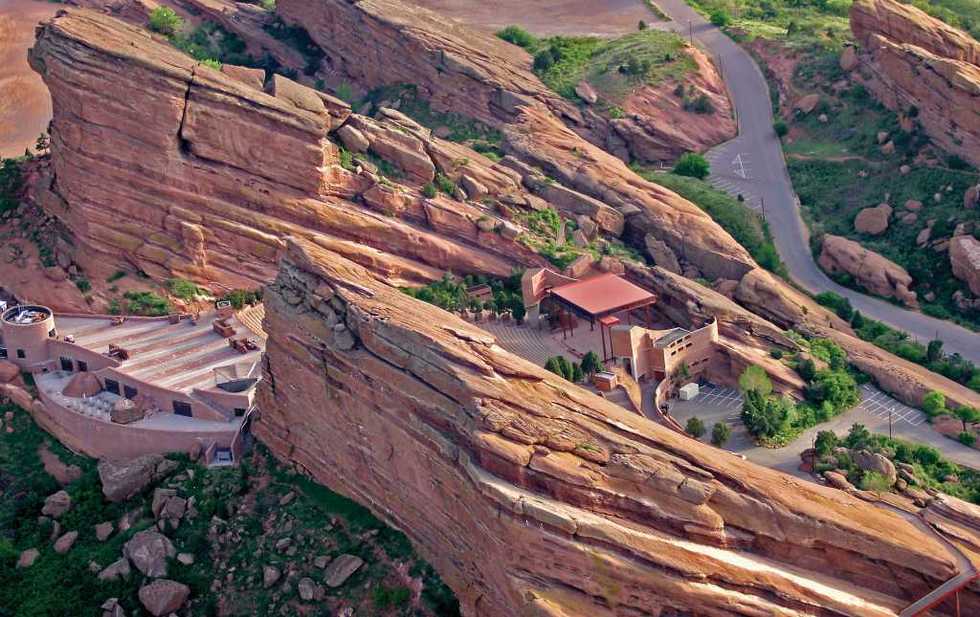 It has been a venue since 1906, but it was in 1983, when a flag-waving, strikingly mulleted Bono belted out “Sunday Bloody Sunday” against its red-tinged sandstone, that this outdoor amphitheatre near Morrison, Colorado, became like the Holy Grail of arenas for performers. Owned by the city of Denver, Red Rocks offers a knee-buckling display of natural beauty and perfect acoustics that makes you sure that God herself left those majestic rocks in that exact position because she loves us and wants us to experience awe. Stories are legend about sitting in one of those 9,450 seats and watching a full moon rise over the back of the stage or the clouds parting to reveal a fully-formed rainbow at the exact moment Widespread Panic, the band that holds the record for most Red Rocks performances, was belting out an acoustic rendition of Pink Floyd’s “Wish You Were Here.” The Beatles, in their only U.S. performance that wasn’t sold out, were the first to take the stage after it was wired and rebuilt for rock concerts. Since then, everyone from Jimi Hendrix, Steve Martin (the second half of his A Wild and Crazy Guy album was produced there in 1978), and Jethro Tull has performed here. www.redrocksonline.com 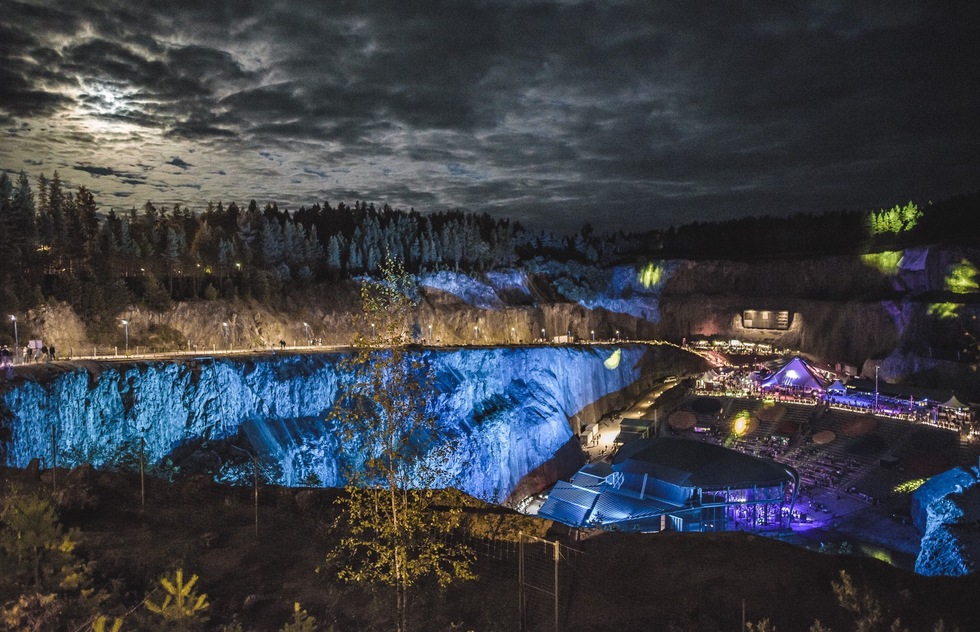 This stunning space near Rattvik (a 3.5-hour train ride from Stockholm) owes its “architecture” and near-perfect acoustics to a meteorite that formed Lake Siljan some 360 million years ago. The theatre itself is carved out of a 20th-century limestone quarry with vertical rock walls that provide echo-free sounds and zero ambient noise. Because it sits atop a lake, concertgoers can swim (performers have also been known to take a dip) and drink straight from its pure waters. Dalhalla hosts 20 to 25 events each summer. Bjork, Kris Kristofferson, and Deep Purple were on the bill in 2018, but opera (a former opera singer discovered the abandoned quarry in 1991) is where this unique concert venue really shines. www.dalhalla.se/en/ 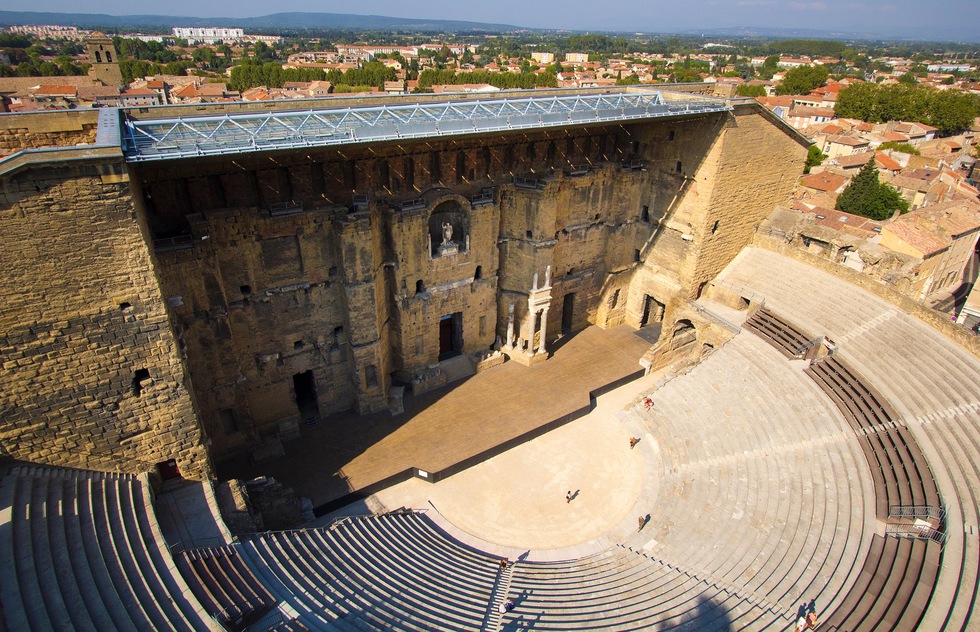 L. Boudereaux
Théâtre Antique D’Orange, Provence, France
This 2,000-year-old icon, a UNESCO World Heritage Site, is worth a visit whether your favorite band is playing here or not. The entire history of the Roman Empire, detailed in an 80-minute audio program (there’s even a treasure hunt for kids) is available daily. Back in the day, this massive theatre, built by Augustus, the first Roman Emperor, provided free all-day juggling, mime, poetry, and acrobatics to distract locals in 1st Century A.D. from political posturing. Louis XIV was still bragging about its four-story wall 1,600 years later, and when France staged its own version of Woodstock in 1975, Europe’s best-preserved Roman theater was the obvious choice. Today, Théâtre D’Orange, also called the Roman Theatre of Orange, hosts concerts, theatrical performances, and the yearly summer opera festival, Les Chorégies d’Orange. www.theatre-antique.com/en 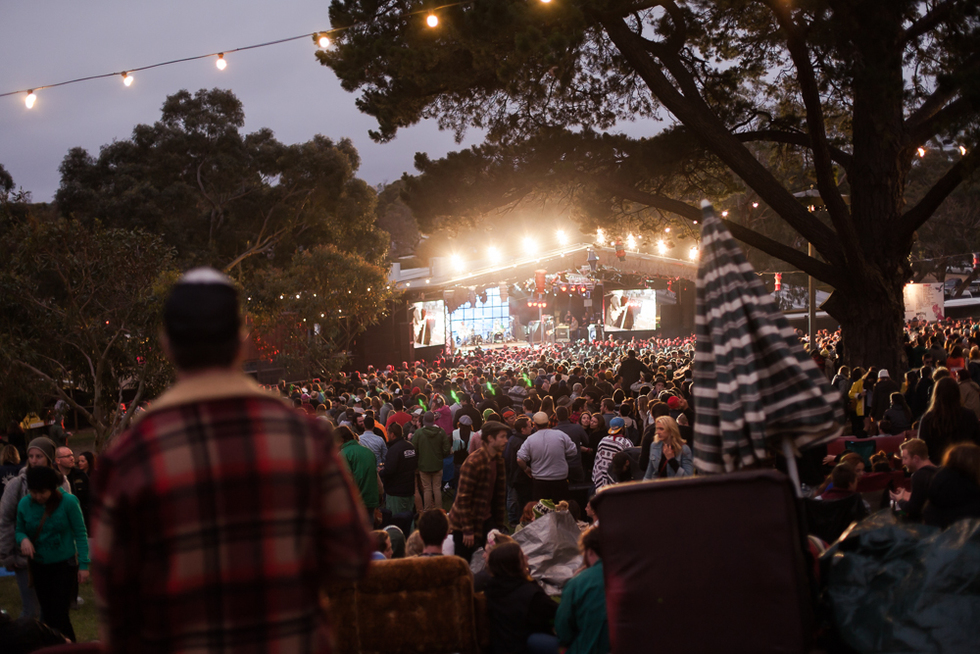 Maybe it’s the posted “no d*ckhead policy.” Or the free-range camping under the stars. Or the complete absence of commercial sponsorship. But the Meredith Supernatural Amphitheatre, home to two annual musical festivals, sells out months before the funky festivities even begin. The stage is situated in a grove of ghost gum trees, a native Australian species known for its ghostly white bark, on the edge of the Nolan farm some 60 miles from Melbourne. As one regular (some who haven’t missed a show since it began in 1991) put it, “it’s a magical mix of music, nature, and weird and wonderful humanity.” Oh yeah, and there’s always a nude footrace on Sunday. http://aunty.mmf.com.au/supernatural-amphitheatre/ 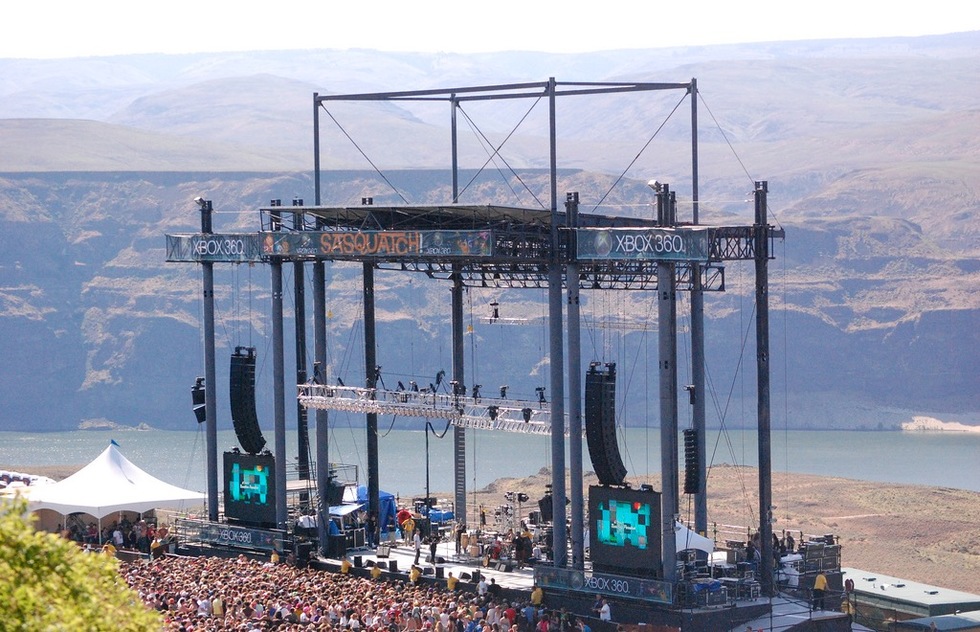 Dave Matthews Band, Phish, and Pearl Jam are just a few of the “house” bands at this 20,000-seat open-air arena where sound, instead of being deflected or absorbed by roofs, bleachers, and concrete floors, reverberates off a sweeping river gorge backdrop. Because it’s a good two-and-a-half-hour drive from both Seattle and Spokane, the Gorge offers concert-goers a variety of après camping options from bare bones to upscale glamping. The stage is perched on a sheer majestic cliff, reminding us that Mother Nature deserves the final word when it comes to ambience and acoustics. www.georgeamphitheatre.com 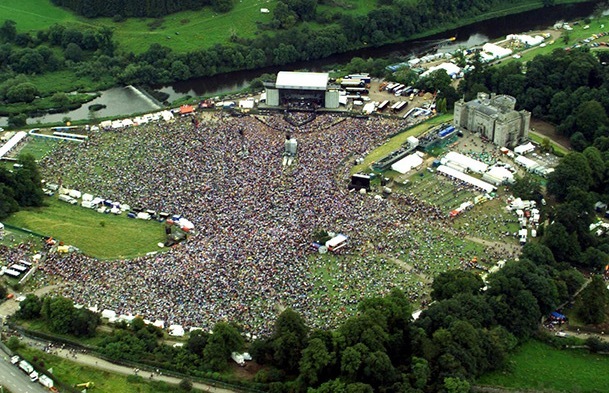 This 18th-century castle overlooking the River Boyne gives new meaning to the term rock royalty. Since 1981, Slane has hosted concerts with the chart-topping likes of David Bowie, Bruce Springsteen, Bob Dylan, The Rolling Stones, Neil Young, Guns N’ Roses, Red Hot Chili Peppers, Eminem (who controversially cancelled his first Slane gig to enter drug rehab) and, of course, U2, who even took up residence here to write and record their album, The Unforgettable Fire. The sloping castle grounds form a natural bowl that can seat up to 100,000. In 2016, Slane Castle began distilling and selling its own signature triple-casked Irish whisky, giving it even more rock and roll cachet. www.slanecastle.ie 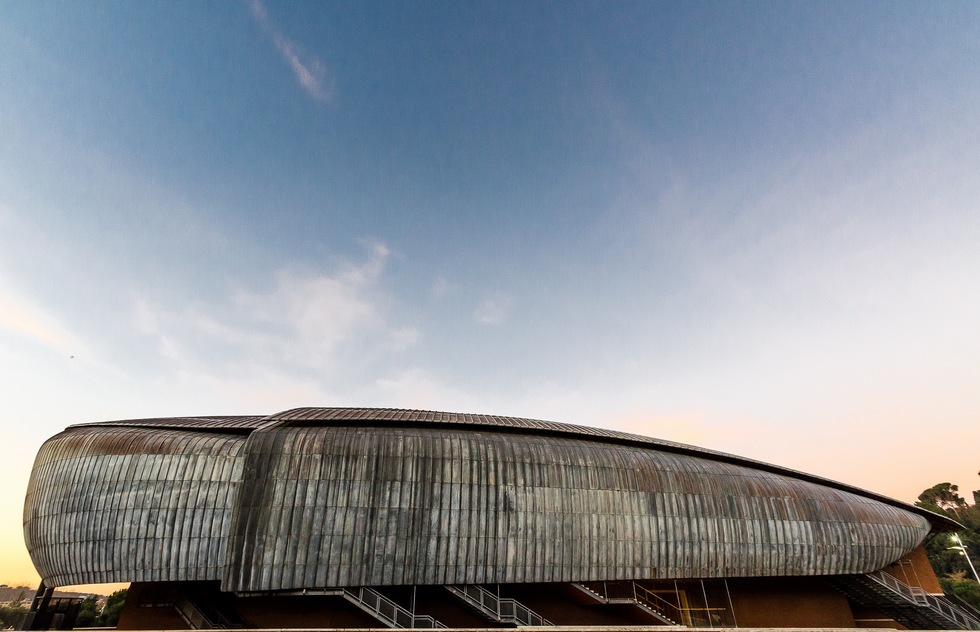 Leave it to architect Renzo Piano to come up with a music complex that stands out in a city that already has the Colosseum, the Pantheon and the Vatican. The legendary architect created an acoustically perfect “City of Music” with three indoor concert halls and an open-air marble amphitheatre modeled after ancient Greek and Roman performance spaces. As so often happens in Rome, archeological remains were uncovered during construction, so Piano, quick on his feet, added a small museum for the 6th-Century B.C. artifacts. Within a couple years of its 2002 inauguration, Parco della Musica became Europe’s most-visited music facility. www.auditorium.com 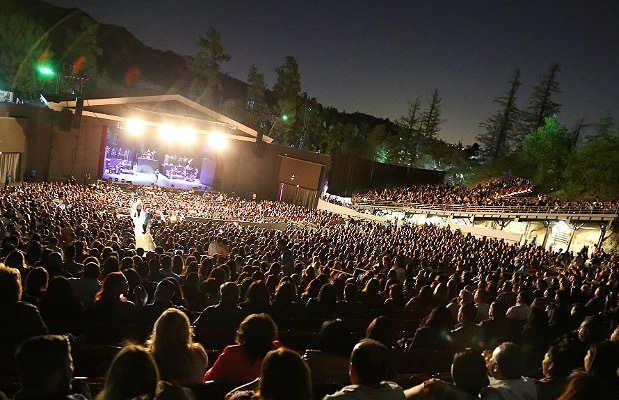 Hard to believe that right in the middle of the United States' second-largest city, you can enjoy mountains, forests, canyons, and stars while dancing with 5,800 of your closest friends. The Greek Theatre in Griffith Park feels intimate, especially compared to the massive, 17,500-seat Hollywood Bowl, 4 miles west. This beloved arena was a 1912 Christmas gift from wealthy landowner Griffith J. Griffith, who donated 3,000 acres to establish a city park and proceeded to tack on a cool million to build this Greek-style venue (1930), which is just downhill from another gift, the Griffith Observatory. It proved to be a savvy P.R. move, as he’d recently been released from prison for shooting his wife in the face (she survived). Musicians from Elton John, Janet Jackson, Maroon 5, Neil Diamond, and Radiohead, to name a few, haven’t held it against him. www.lagreektheatre.com 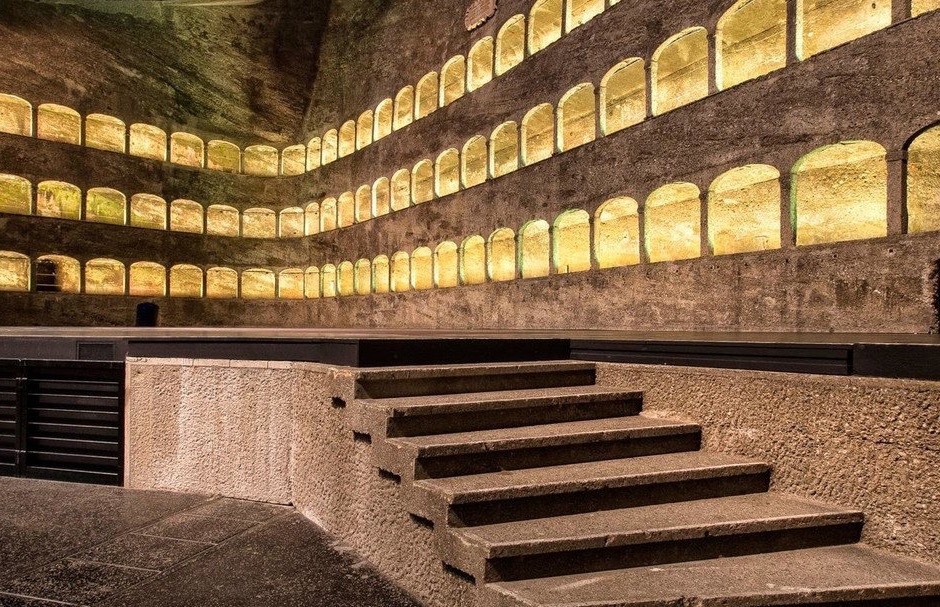 Not surprising that the city that gave us Mozart would also give us an inimitable concert hall. And, yes, the name (for those who don't understand German) actually means rock riding school. Three centuries ago, an archbishop figured the pit left from quarrying stones for the Salzburg cathedral would make a perfect riding school for his mounted soldiers—he also used it to stage battles with wild animals. Today, its stone stage and rock tiers are used for more dignified purposes: concerts, plays, and other events. It even appeared in the climax of 1965's The Sound of Music as the concert hall where the von Trapps slipped away in mid-performance to escape the Nazis. 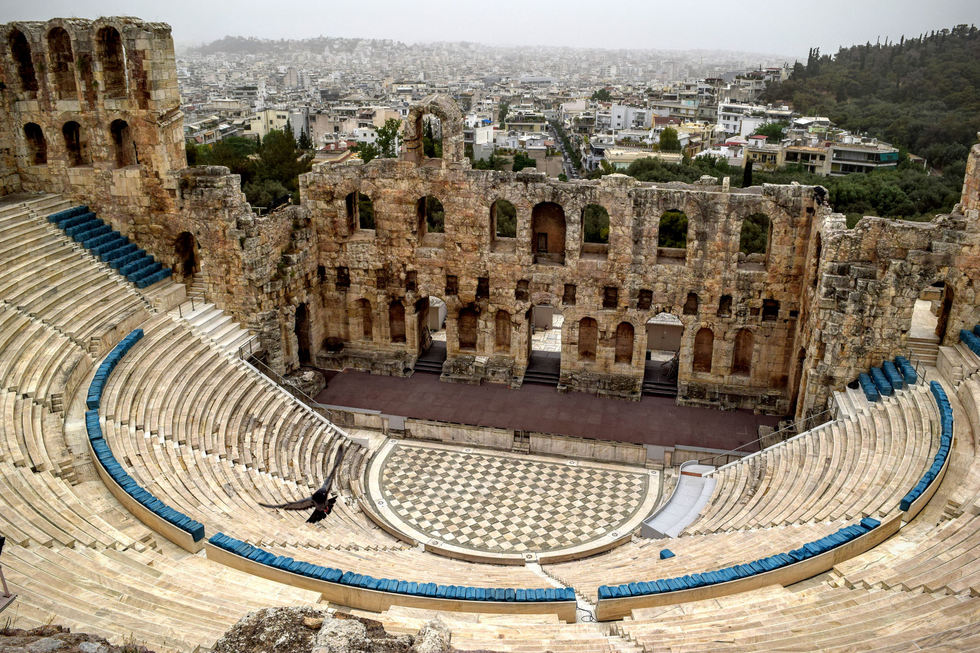 Nobody can out-acoustic the Greeks. At the Great Theatre of Epidaurus, for example, tour guides delight audience members by scattering them throughout the 13,000-seat stadium and then lighting a single crackling match at center stage—which everyone can hear perfectly. But that theatre is 2 hours by a tedious bus ride from Athens. This Herodeon (as locals call the Odeon), on the other hand, is right on the southwest slope of the Acropolis, where every tourist to Athens goes. This intimate 4,680-seat stone space was built specifically for musical contests (way back in 161 A.D.) and continues to host some of the world’s best performances. Since its renovation in the 1950s, audiences have enjoyed the greatest artists of their generations, from Luciano Pavarotti to Frank Sinatra to Maria Callas. It's truly one of the world's most spectacular settings for a concert. greekfestival.gr/en/venues