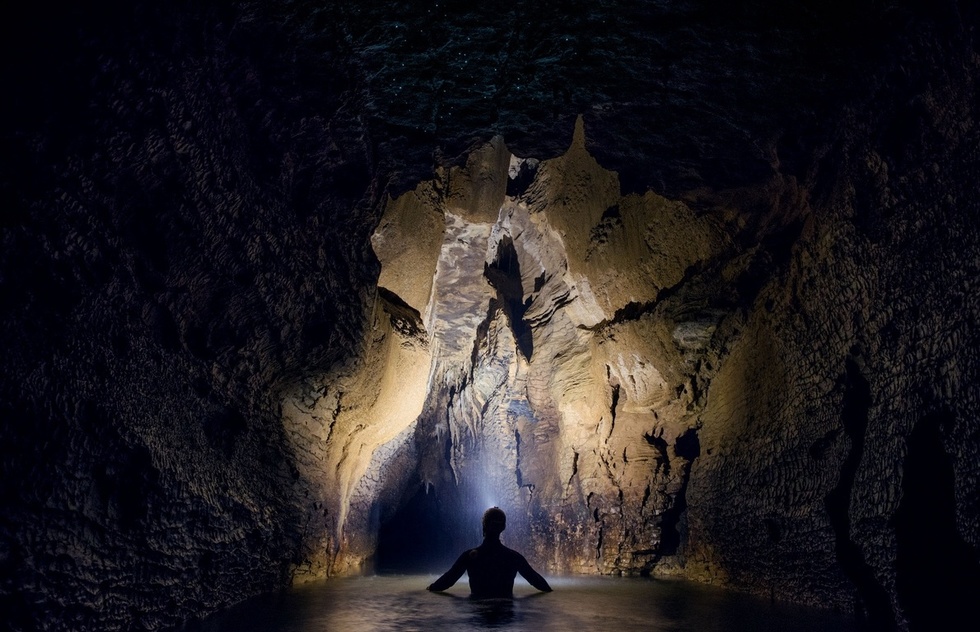 Some of the most spectacular views of the earth come not from towering heights, but from deep inside it. These wondrous caverns—from the rainforests of Belize to rocky dwellings in Tunisia to massive underground aquifers in Greece—offer a fascinating, geologically diverse view of what lies beneath the surface. 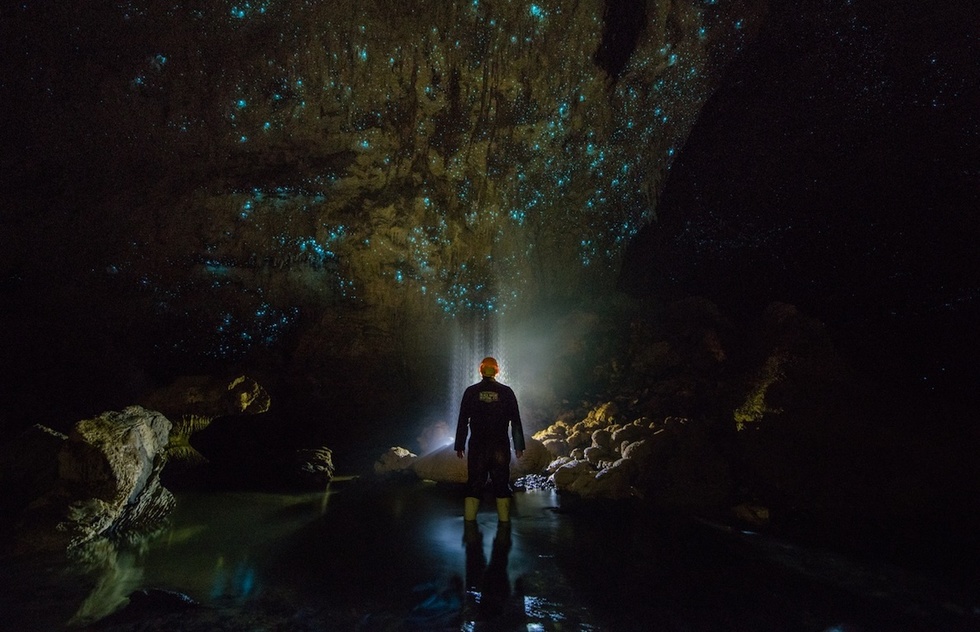 New Zealand’s unique native biology is on display at the Waitomo Glowworm Caves, where a species of gnat lights up cavern walls by releasing a sticky, bioluminescent thread. Moths, mayflies, and snails are attracted to the glow but get stuck in these "fishing lines," making them easy prey for the gnats. Daily walking and boat tours through the caves are available, as are more adventurous blackwater rafting and climbing trips (some with subterranean ziplining), depending on the weather and season. For a tour with easier and drier terrain, try the nearby Aranui Cave, which doesn't have glowworms but does have impressive stalactites, stalagmites, and rock formations. 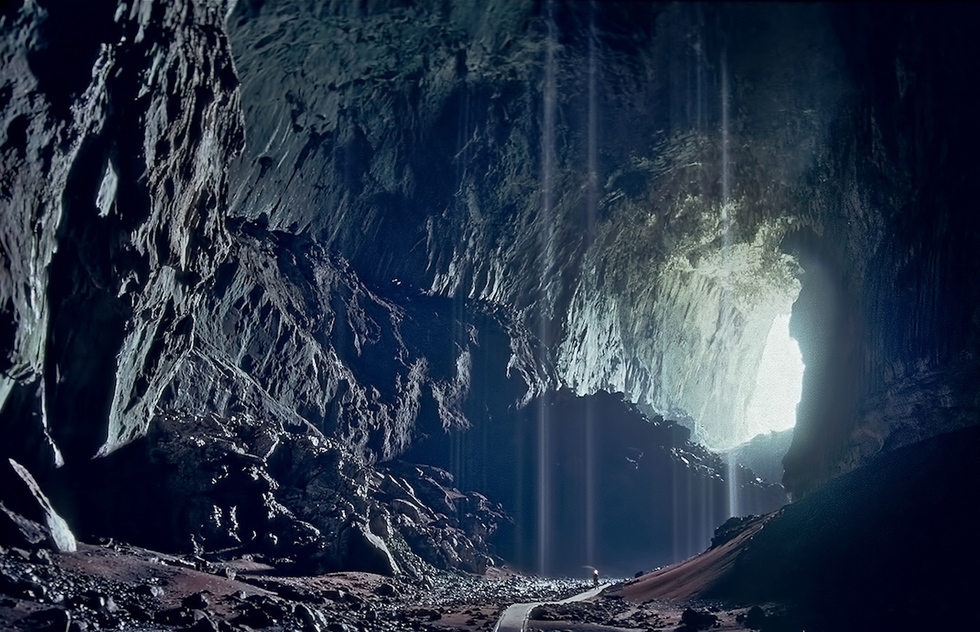 Deer Cave is buried in the spectacular Gunung Mulu National Park of Malaysia. Surrounded by dense rainforest, this enormous cave is 570 feet wide and 400 feet high at its largest points. It is home to a population of about 3 million bats, which can be observed exiting the cave in one enormous flock every night at dusk to hunt for insects in the nearby forest. Inside the limestone cavern, visitors follow a path to reach the “Garden of Eden," where natural sunlight leaks into the cave’s chamber, allowing vegetation to thrive. 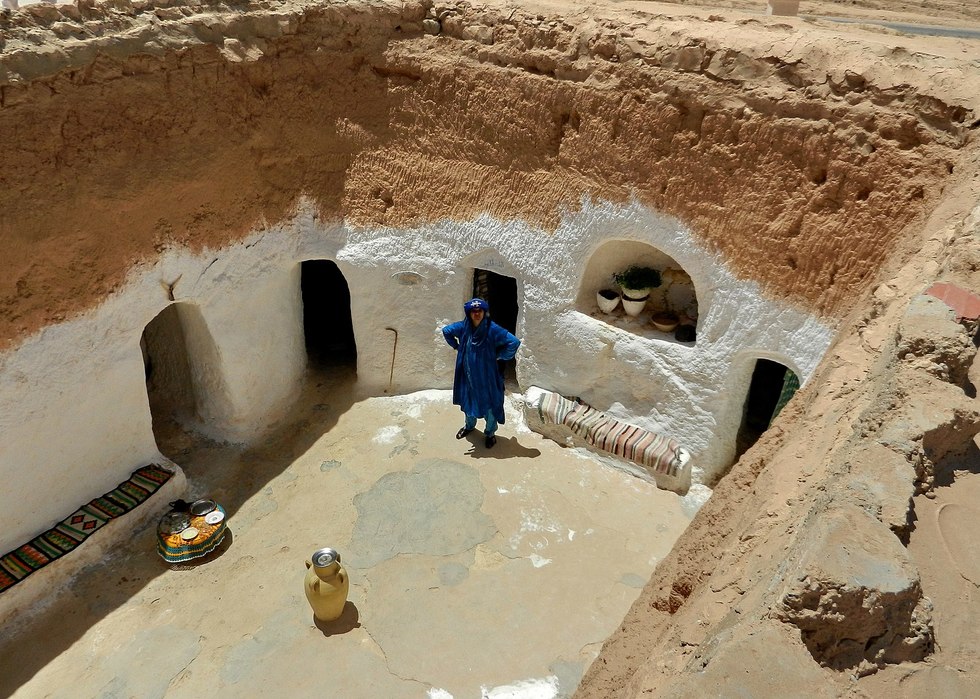 Tanya Dedyukhina
Matmâta Berber Cave Homes, Tunisia
The cave homes of Matmâta are manmade, but no less spectacular for it. The dwellings were carved out of the sandstone in central Tunisia by the Berber people starting around 700 years ago. Many homes are connected, interrupted at intervals by courtyards leading to kitchens, bedrooms, and underground passageways. Some of the latter are extensive, but tunnels always lead back to the sunken courtyards. Outside the Tunisian city of Gabès, the Hotel Sidi Driss—used as Luke Skywalker's childhood home in the first Star Wars movie—is a traditional Berber cave where you can still spend the night. From the reception area, subterranean hallways lead to 20 different guest rooms. 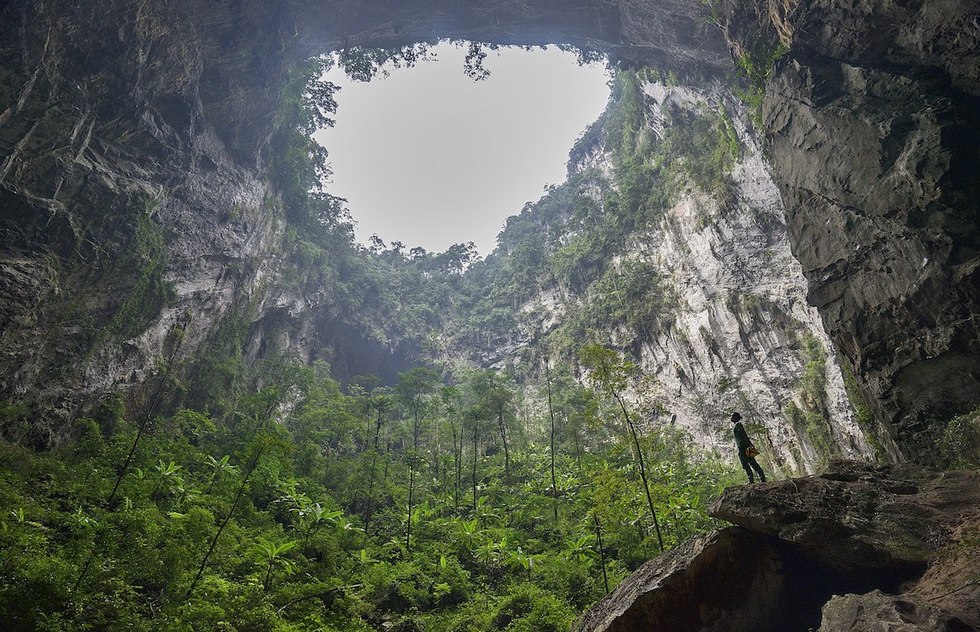 Vietnam’s caves are, without question, some of the most impressive in the world, and Hang Sơn Đoòng is the country’s crown jewel. But be warned: This cave—the largest on earth—is for intrepid spelunkers only. It takes a day just to hike to the entrance, and then the steep descent requires ropes, cleats, and belays. Trekking along a jagged path, visitors eventually reach an underground river within the cavern (the water is shallow for most of the year but becomes deep and fast-moving during the rainy season). If you go to all the trouble to see it, Hang Sơn Đoòng will awe you with its sheer immensity. The main chamber is big enough to hold a Boeing 747. 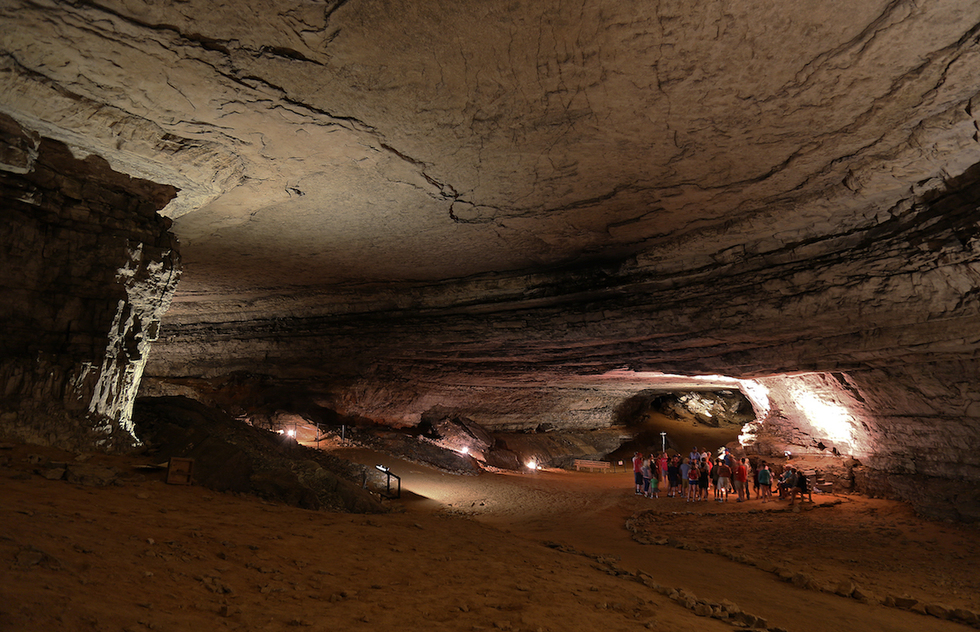 Kentucky's Mammoth Cave National Park is the longest cave system in the world—in fact, with 400 miles of passages, it’s twice as long as the next competitor. But the system is accessible despite its size. Visitors can either stick to the lighted areas or pick up a paraffin lamp and follow a guide into further reaches. The cave’s mixture of sandstone and limestone makes it a remarkably stable natural structure. Its long history includes use as a burial site for Native Americans, and, later, as a source of minerals. During the War of 1812, the saltpeter found here by miners went into gunpowder for weapons. 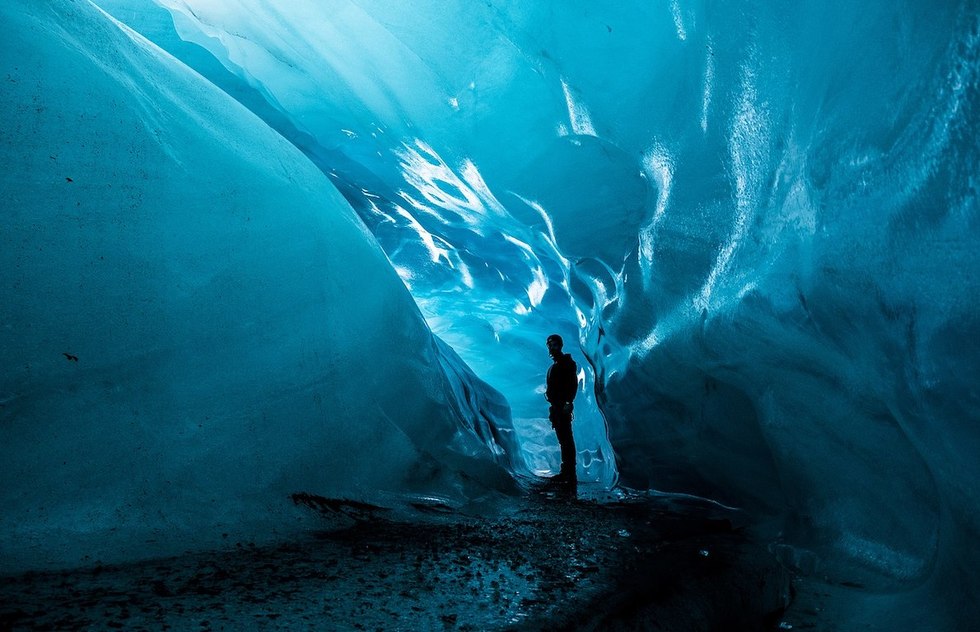 The beautiful blue ice caves formed by Iceland’s Vatnajökull glacier offer a nontraditional perspective on Mother Nature’s architecture. Made from shifting ice, the caves thaw incrementally during the summer, then resolidify in winter, creating new passageways each year. Obviously, that means you can only go inside during the cold months, when the walls are completely solid and unlikely to collapse. We highly recommend you take a guided tour, lest you get lost. Vatnajökull is relatively accessible from the nearby town of Hof. 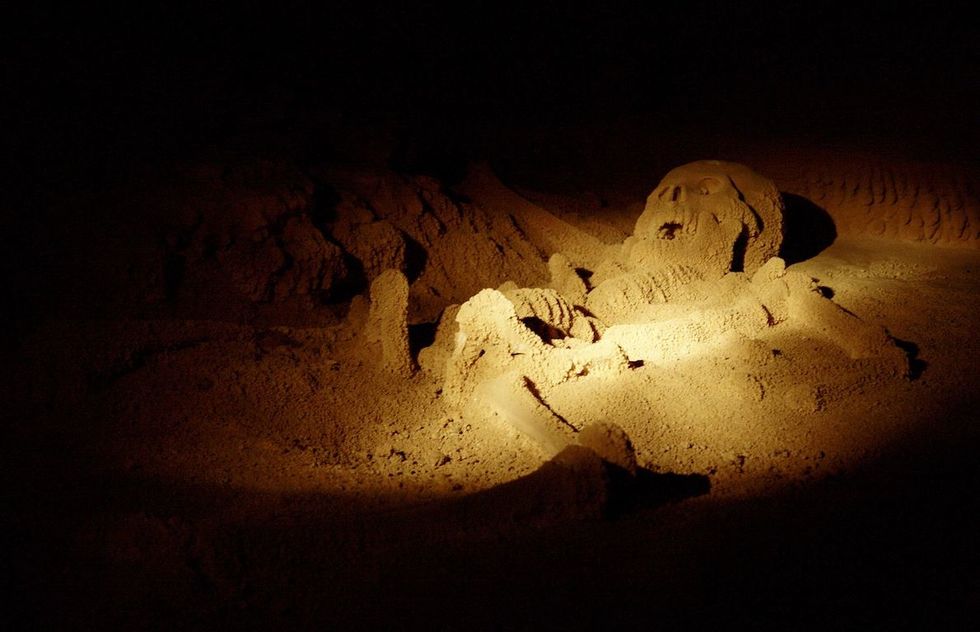 The Mayans of Belize believed caves were passages to heaven. Consequently, many stony chambers were used for important religious rituals. In the case of Actun Tunichil Muknal—commonly known as ATM—precious artifacts were left behind. To this day, the cave is a working archaeological site, which is why visitors must be accompanied by state-licensed guides. You’ll also need to take off your shoes at one point so that you don’t stomp on ancient artifacts, including skeletons, calcified to the floor. Throw in a crystal pool that you have to swim through at the entrance, and you've got yourself an adventure worthy of Indiana Jones. 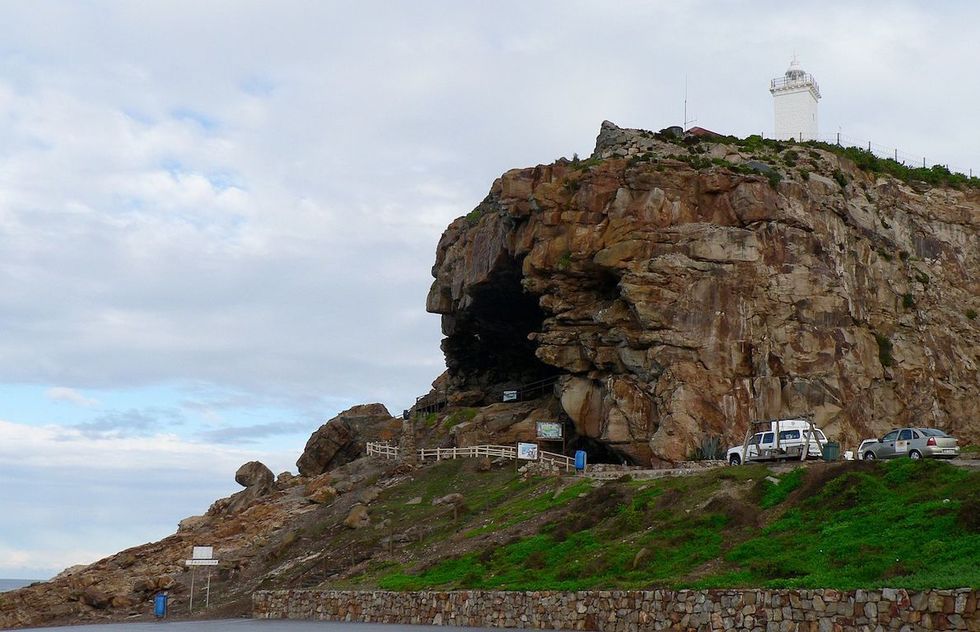 Like the ATM in Belize, the caves at Pinnacle Point in South Africa's Western Cape Province are as notable for their history as their beauty. The beachside cave system, situated under the Cape St. Blaize Lighthouse, was inhabited by Middle Stone Age peoples between 170,000 and 400,000 years ago. Stone tools and human remains have been found at the site, supporting the theory of some archaeologists that all of us descended from a very small population of Homo sapiens based right here. Besides providing a look at prehistoric life, the cave opens onto a gorgeous view of Mossel Bay. 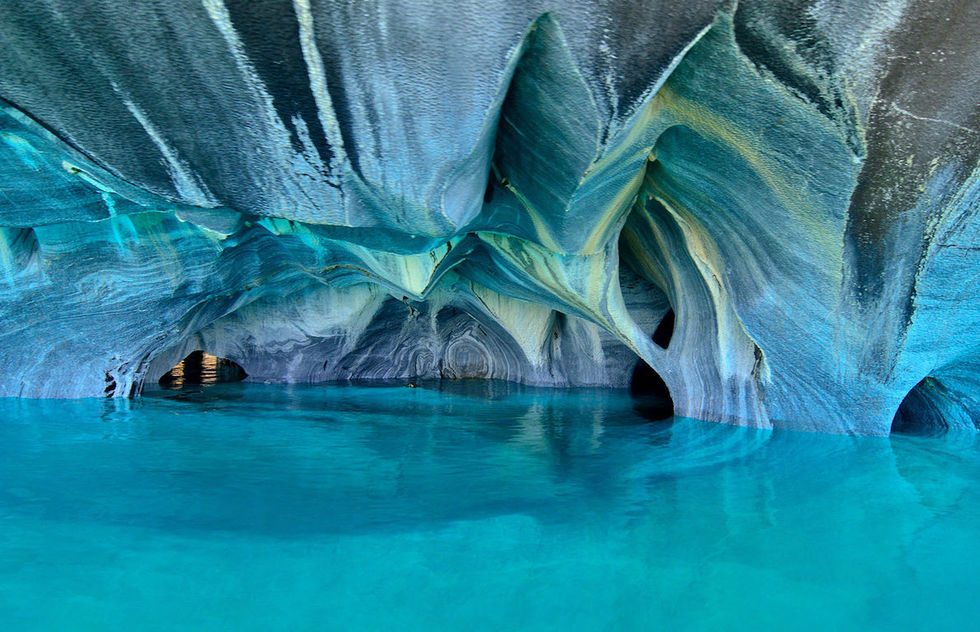 Though you’ll have to cross some cold water to get to it, the Marble Cathedral in Chilean Patagonia is geologically unique in that it's partially submerged and made of marble. That favorite medium of ancient and Renaissance sculptors has been cut and molded in this case by the waves of General Carrera Lake over tens of thousands of years. Most visitors access the Marble Cathedral by rowboat or kayak, which you can rent in the nearby town of Puerto Río Tranquilo. The cavern looks its best in the early morning light from November to February (summer in the Southern Hemisphere), after snowmelt has made the water an electric shade of blue. 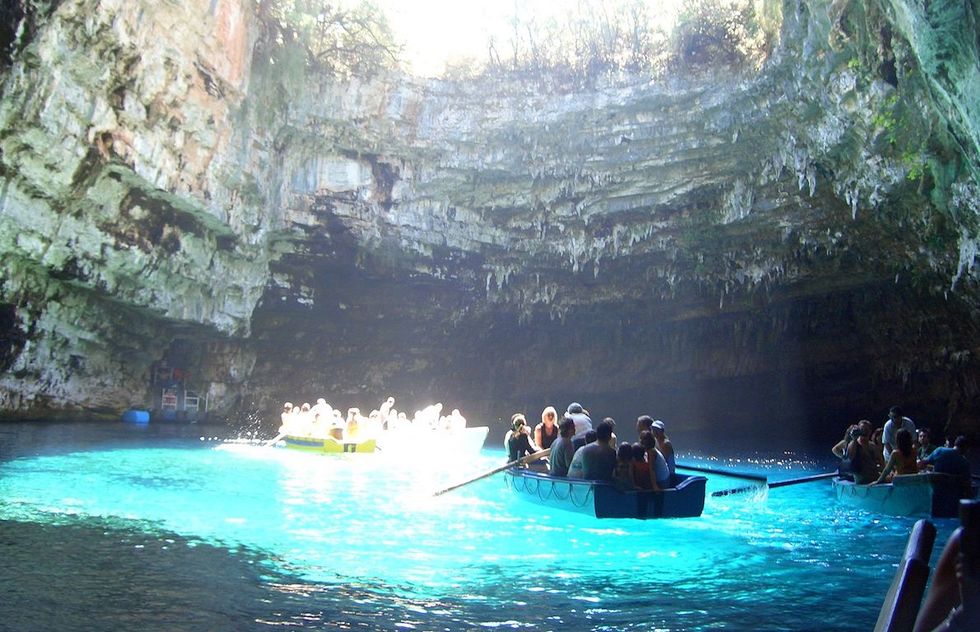 Rounding off the list is the Melissani Cave in Kefalonia, Greece. The lake cave—actually a two-cavern karst structure if you want to get technical—was an underground aquifer that collapsed after an earthquake in the 1950s. Rather than trekking along a path or scaling the walls, visitors row through the cave’s bright blue water, 100 feet beneath the visible surface of the earth.