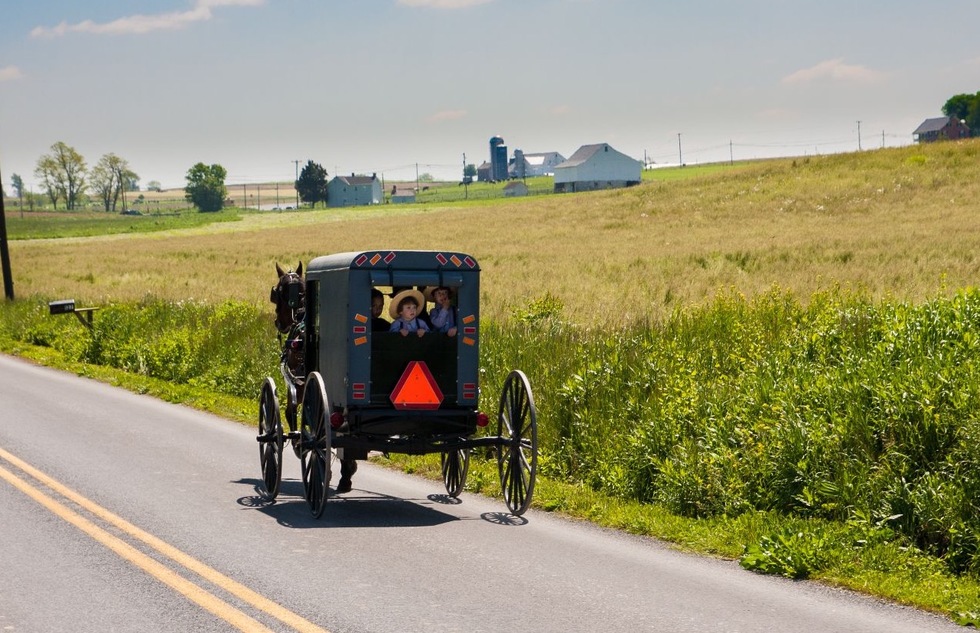 Beards, Buggies, and Beyond: How to Spend a Weekend in Pennsylvania Dutch Country

Southern Pennsylvania’s Lancaster County is home to one of the oldest and largest Amish communities in the United States. Because that separatist religious sect is best known, among outsiders, for shunning modern technologies like automobiles and electricity, visitors to the region often expect to see nothing but beards, buggies, and butter-churning. But while it's true that Lancaster County has a plentiful supply of those things, there are also outdoorsy and historical attractions as well as some intriguing arts and culinary offerings. That adds up to a rewarding and well-balanced weekend within a 3-hour drive of several major population centers, including New York City, Philadelphia, Baltimore, and Washington, D.C. We’ve assembled a three-day Lancaster County itinerary that balances Amish encounters and pastoral pleasures with a few surprises to challenge the stereotypes. 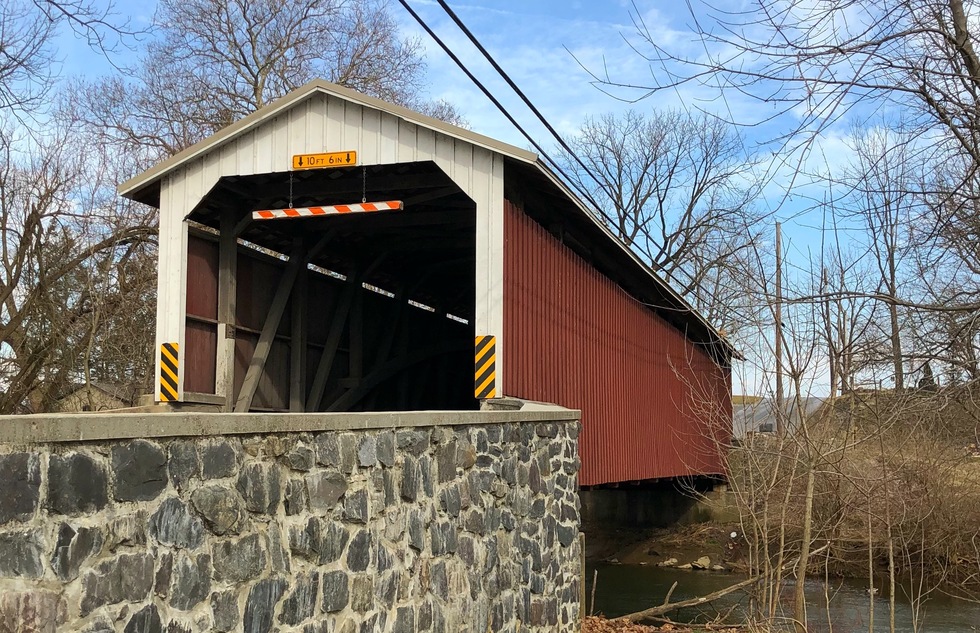 Get the lay of the land with a scenic drive past the farms, parks, and towns just outside the city of Lancaster. The region’s tourism office, Discover Lancaster, has compiled several downloadable self-guided driving tours with easy-to-follow instructions and suggestions for stops along the way. Among the most irresistible: Lancaster County’s more than two dozen highly photogenic wooden covered bridges. Driving across the slats under those structures’ arched interiors produces a satisfying ka-thunk, ka-thunk rhythm, and it's supposed to be good luck to kiss your significant other while inside. Then it’s back to rolling pastures, one-room schoolhouses, and villages such as Strasburg, with its kid-friendly railroad attractions including a museum and steam-train rides. Along the rural roadways, you’ll likely see the weekend’s first horse-drawn buggies—black for Amish, gray for Mennonite (a different but similar sect). Aim to arrive in downtown Lancaster for lunch and our next stop. 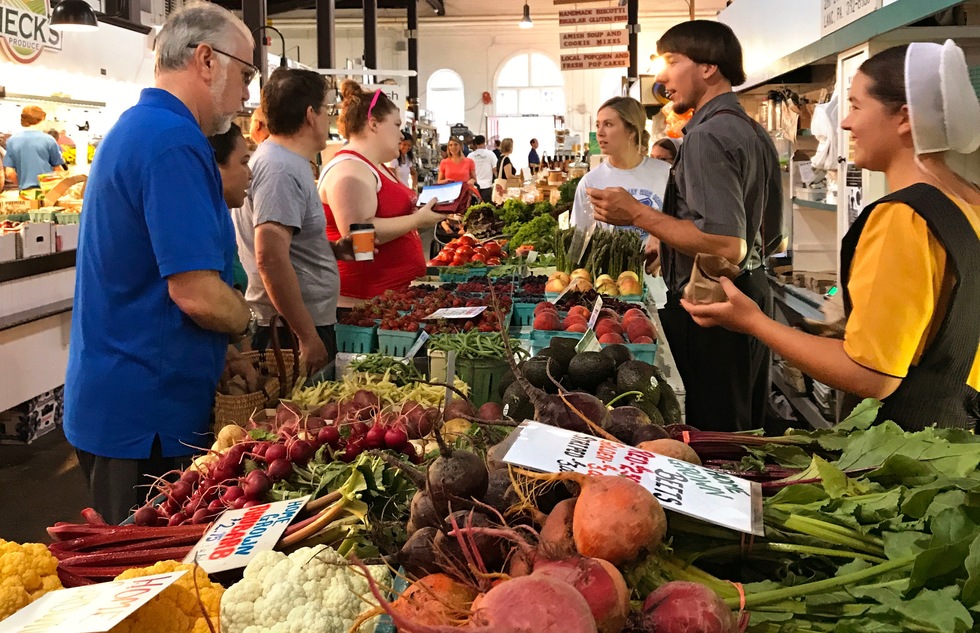 Established in 1730, downtown Lancaster’s Central Market (23 N Market St.; open Tues., Fri.–Sat.) lays claim to being the oldest continuously operating farmers’ market in the United States. Inside a cavernous red-brick hall, you can shop for fresh breads, meats, cheeses, produce, and baked goods like locally beloved whoopie pies, as well as prepared soups and sandwiches. Many stalls are operated by Amish vendors—jarred preserves often bear labels with the names of the locals responsible for making the contents (shout-out to apple-butter virtuoso Esther Sangrey, who is definitely not reading this). Alongside stalls that have been occupied by the same families for generations, you’ll find newer Puerto Rican, African, and Middle Eastern specialties, reflecting the presence of Lancaster residents who don’t fit under the “Pennsylvania Dutch” umbrella.

That term, by the way, refers to all the area’s German-American inhabitants, not just the Amish. “Dutch” derives from “Deutsch” (meaning German) and has nothing to do with tulips or windmills. 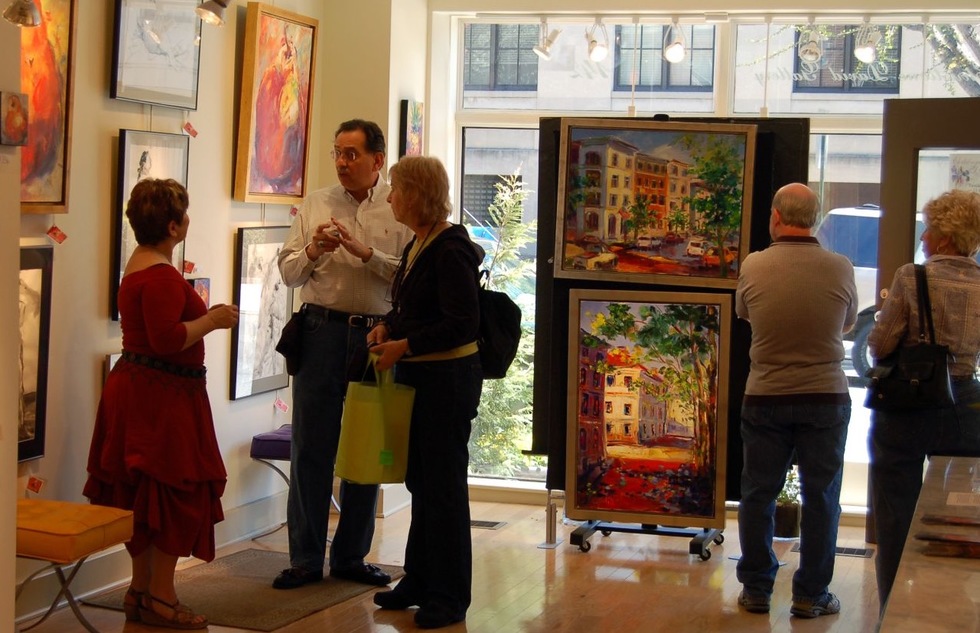 Having filled up on whoopie pies and apple butter, leave Lancaster Central Market on foot to explore the city’s strikingly artsy downtown. Walking north on Prince St. (half a block west of the market), you’ll pass two performing arts venues—the grand and historic Fulton Theatre and the newer Ware Center—as well as a string of galleries showcasing the work of local artists. The Pennsylvania College of Art & Design, also on Prince St., does its part to keep the city stocked with creatives. You’ll want to come back to this area in the evening if it’s the first Friday of the month. That’s when galleries extend their hours and the streets fill up with food vendors, street performers, special exhibits, and other boho happenings. 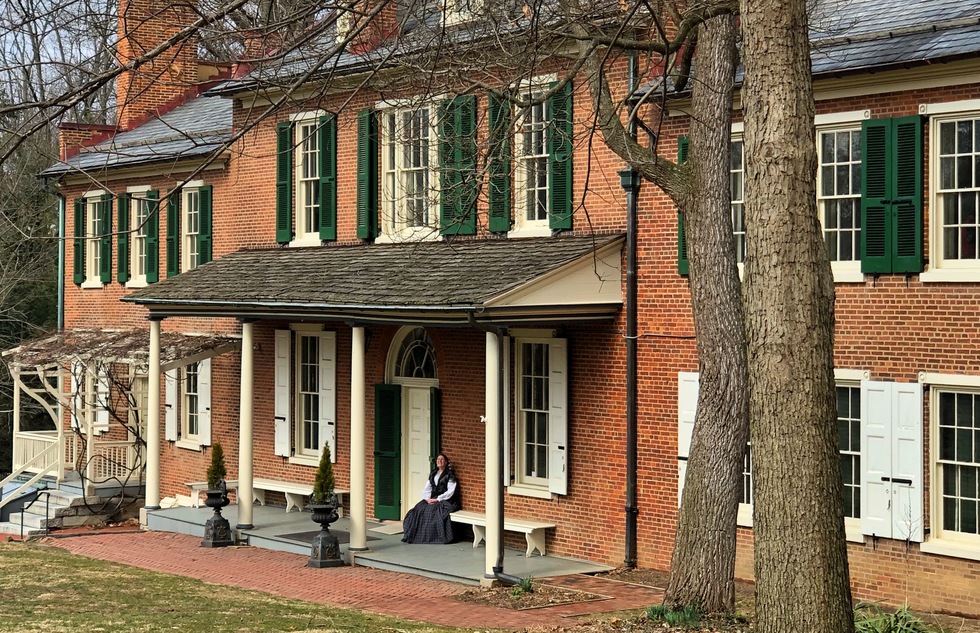 Zac Thompson
Wheatland: A Nice House for a Weak President

For some historical perspective, drive a couple miles west of downtown to visit Wheatland, the Federal-style brick house that belonged to 15th U.S. President James Buchanan. He’s notable for being the only president to 1.) remain a lifelong bachelor and 2.) let the Union fall apart. Costumed tour guides at Buchanan's well-preserved home don’t delve much into how the conservative Democrat's lack of action on the issues of slavery and secession helped speed the way toward the Civil War, but you do get to see his pink china, original parlor furnishings, and the upstairs bedroom where he died. A fuller picture emerges at the adjacent LancasterHistory building, where visitors can learn about Buchanan's more progressive contemporary—and fellow Lancastrian—U.S. Rep. Thaddeus Stevens, an abolitionist labeled a “radical” because he supported equality among the races. Soon, visitors will be able to tour the home, located at Vine and South Queen streets, where Stevens lived with his housekeeper, Underground Railroad collaborator, and possible lover (according to Steven Spielberg’s Lincoln), Lydia Hamilton Smith. 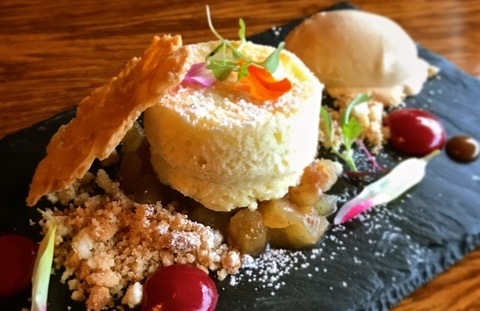 Citronnelle Restaurant
Dinner and a Movie at Citronnelle and Zoetropolis

Return to downtown Lancaster—and the present tense—with dinner at Citronnelle (110 W Orange St.; pictured), an intimate BYOB bistro offering a contemporary take on French cuisine, with some Asian and North African influences thrown in, too. Classics like duck leg confit might share space on the seasonal menu with a harvest salad enlivened with Moroccan spices or crab croquettes served with wasabi aioli. Dishes are rich and complex without getting snooty about it, and ingredients are locally sourced wherever possible, thank goodness. It’d be a shame for a restaurant not to be farm-to-table with all those farms nearby. After dinner, see what’s playing around the corner at Zoetropolis (112 N Water St.), an indie cinema/distillery combo. 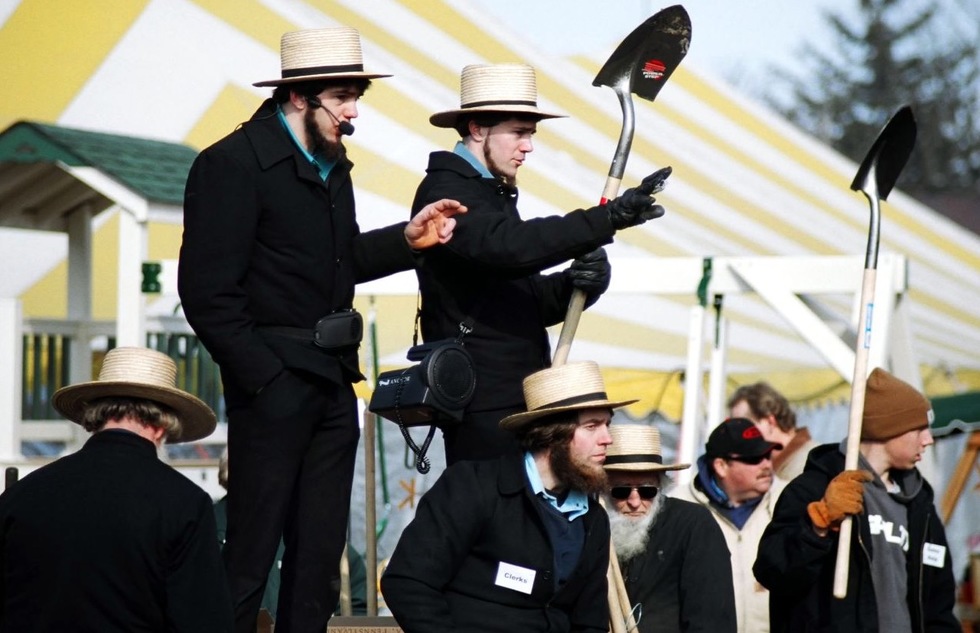 DiscoverLancaster.com
Saturday: Among the Amish

Devote the morning of your second day in Lancaster County to encounters with the Amish. On Saturdays starting in the spring and continuing on scattered dates through the summer and early fall, you can attend a “mud sale,” one of the fairlike fundraisers held in small towns to benefit local volunteer fire departments. On slushy grounds still thawing from winter snow (hence the term “mud sale”), Amish auctioneers employ a musically motor-mouth patter to hawk quilts, tools, crafts, and more, while bonneted and straw-hatted vendors sell freshly made doughnuts, buttery soft pretzels, chicken corn soup, and shoo-fly pie, a quintessential Pennsylvania Dutch treat that involves gooey molasses between crumbs and crust. (Find a sale to attend at DiscoverLancaster.com).

“English”—as the Amish refer to all those outside their group, regardless of ethnicity—are welcome at mud sales. But don’t gawk, blurt impertinent questions, or snap intrusive photos. Preening for a camera violates Amish beliefs about the importance of humility. 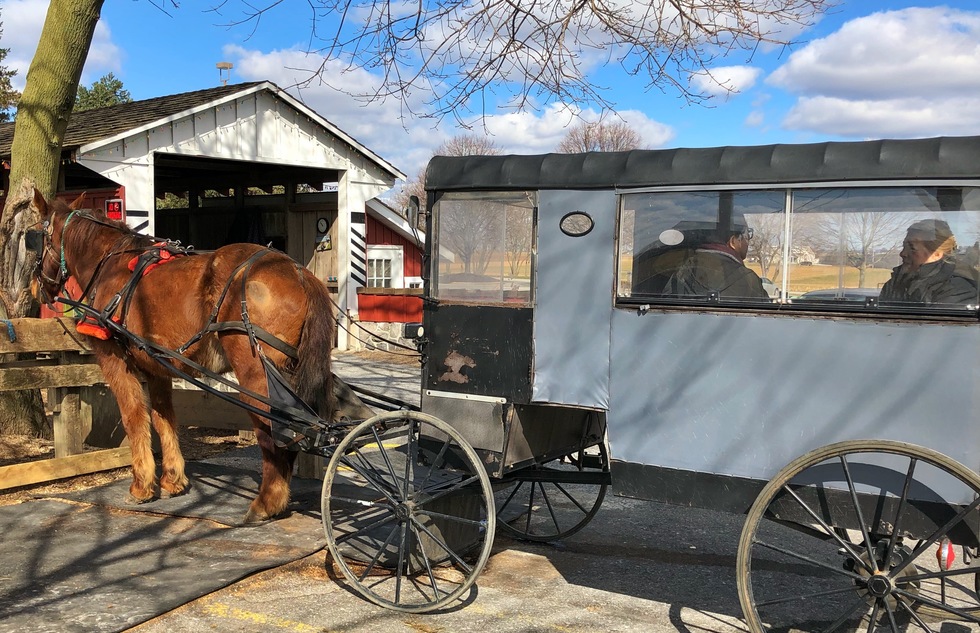 Alternatively, you can experience the Amish mode of transport for yourself by taking a spin aboard a horse-drawn carriage operated by an outfit such as Aaron & Jessica’s Buggy Rides (pictured), based in the township of Bird-in-Hand. That company’s drivers are all former or active members of the Amish and Mennonite communities. As you clip-clop along country roads, you learn inside info about those groups' beliefs and customs. Depending on the tour you select, your buggy might stop at a farm stand for cookies or a barn where you can meet cows and horses. No reservations are necessary and you can even bring along your dog (warning: the cows will freak out your chihuahua). If you didn’t stuff yourself at a mud sale, you’ll need lunch after the buggy ride. Venerable buffet joint Miller’s Smorgasbord (2811 Lincoln Hwy. E in Ronks, about a 10-minute drive southwest of Bird-in-Hand) has been laying out huge, hearty spreads since 1929. 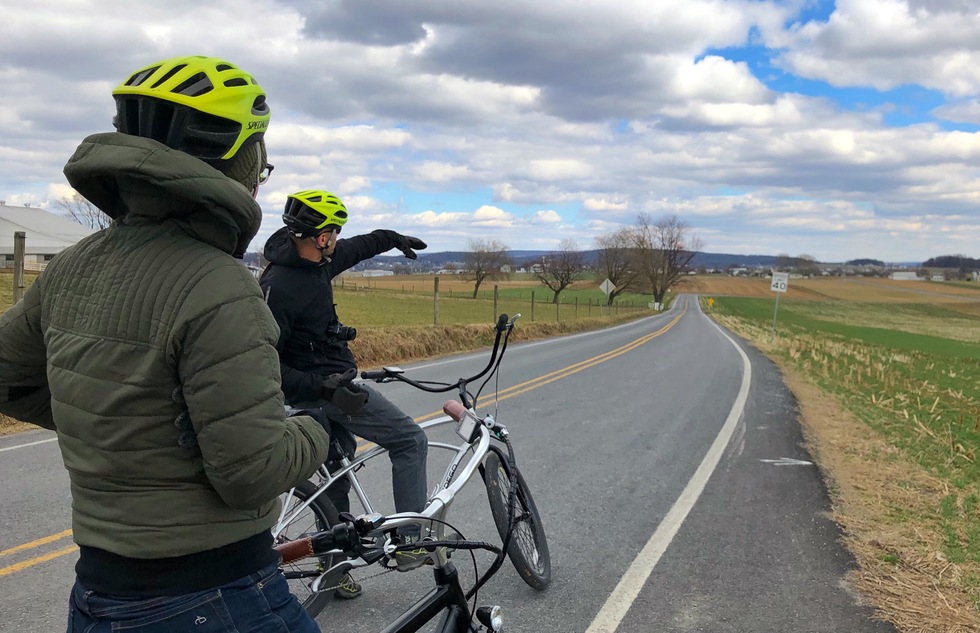 Frank Arce
The Back Roads by Bike 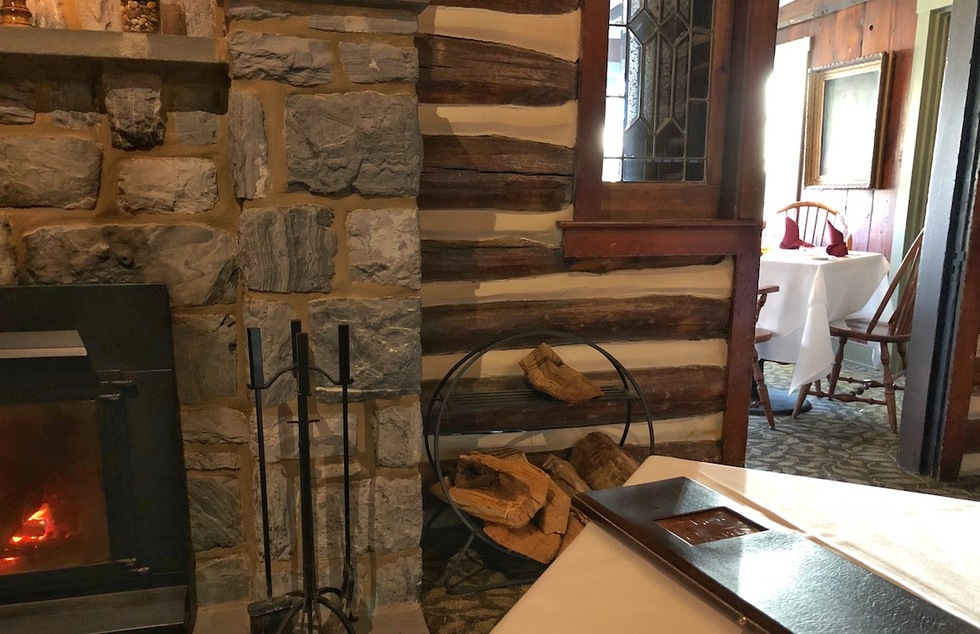 Zac Thompson
Dinner and Illicit-ish Drinks at the Log Cabin

Hidden in a wooded area near Warwick Township, the Log Cabin (11 Lehoy Forest Dr., about 5 miles east of Lititz) opened as a speakeasy during Prohibition, long before the speakeasy trend would embolden any bar with a vaguely Gatsby-esque vibe to adopt the term. Though the property has been expanded and renovated over the years to include several different dining areas, a piano bar, and an outdoor patio, you can still sip an old fashioned amid the original room’s log walls and fireplace before digging into traditional American fare like steaks and seafood served on white tablecloths. Speaking of carnivorous behavior, noted meat-dress-wearer Lady Gaga once dined in a private room at the Log Cabin, back when the singer was dating Lancaster County native Taylor Kinney (The Vampire Diaries, Chicago Fire). 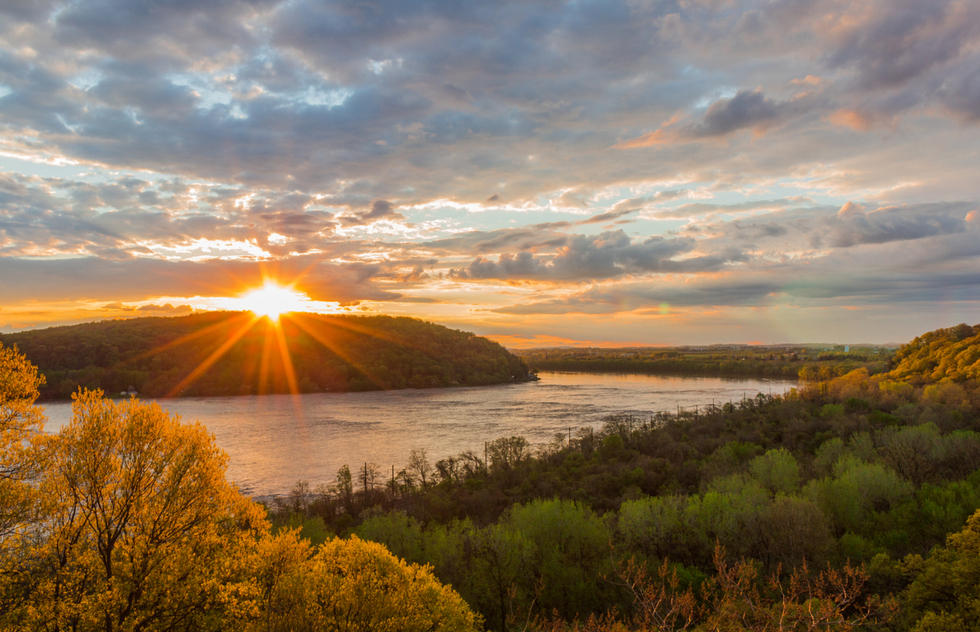 The western edge of Lancaster County is defined by the mighty Susquehanna River. The bikeable, hikeable Northwest Lancaster County River Trail stretches alongside 14 miles of the waterway, passing through leafy parks and towns with roots in the 19th century’s Industrial Revolution. With its riverside woods and bluffs next to rail lines and the crumbling remains of iron furnaces, the setting provides a marked contrast to the wide-open farmland on the eastern side of the county. If there’s room in your schedule, consider renting a canoe or kayak from Chiques Rock Outfitters at the Columbia Crossing River Trails Center (41 Walnut St. in Columbia) and spend some time paddling down a river that has always been a vital artery for this region’s inhabitants, starting with the Susquehannock people. 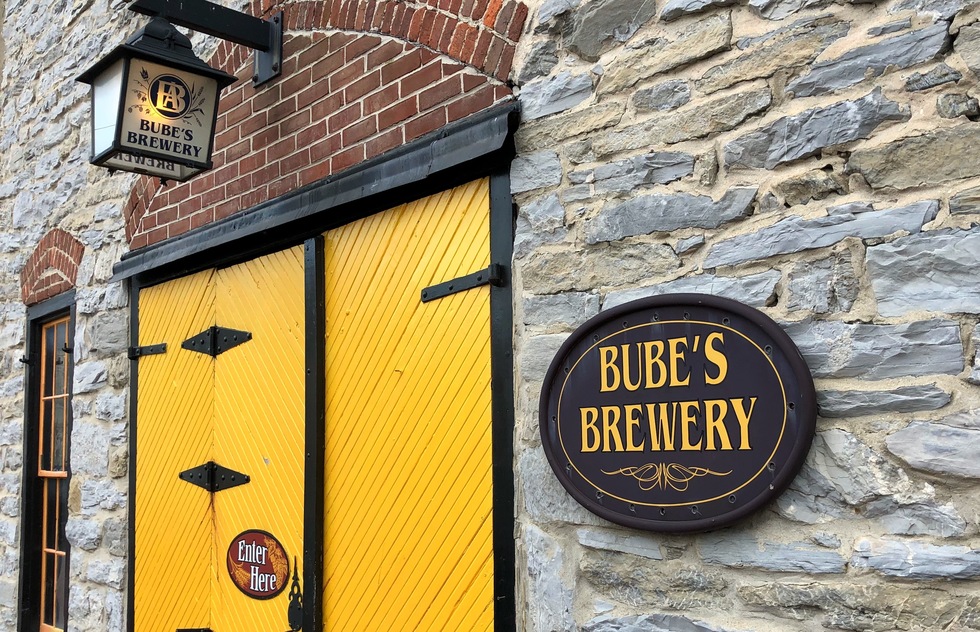 Bube’s Brewery in Mount Joy (102 N Market St., 7 miles north of Columbia) was established by a German immigrant in the 1870s. It was one of the era’s many small-town, German-owned breweries, most of which faded away, while a lucky few grew into household names like Pennsylvania’s own Yuengling, based in Pottsville 60 miles to the north. At Bube’s, microbeers are still made onsite; lift a lager and have a burger in the tavern housed in the brewery’s old bottling plant. Before you leave, ask for a quick look at the subterranean catacombs, a candlelit, barrel-lined stone chamber that becomes a restaurant at night. The old-timey Victorian hotel next door was another Bube enterprise, designed to accommodate railroad travelers passing through. Today the building is used for murder mystery dinners and has eight quirky themed rooms—recalling a jungle, the Arabian Nights, and so on—for overnight guests. Yes, of course the place is rumored to be haunted. 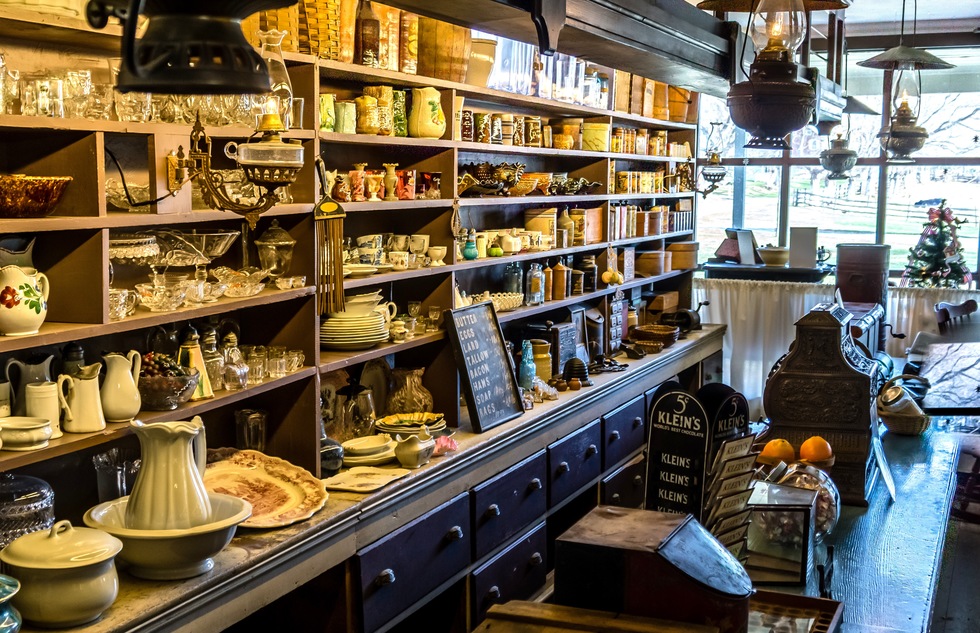 While you’re rooting around in the past, don’t overlook the Landis Valley Village and Farm Museum (2451 Kissel Hill Rd., 14 miles east of Mount Joy). This 100-acre complex encompasses more than two dozen historic buildings, thousands of objects, and a few deadpan cows as part of a mission to interpret Pennsylvania German daily life from the middle of the 1700s through the early decades of the 1900s. Founded by Mennonite-born brothers Henry and George Landis in 1925, the site lets visitors peek into an 1890s Amish schoolhouse and country store (pictured), watch a blacksmith at work, and check out local innovations such as the covered Conestoga wagon used for transporting enormous loads of cargo.

And speaking of transport, it’s probably time to drive back home if you plan to return to your regular routine on Monday. If you’ve got time for one last dinner in the area, though, splurge on an upscale Italian feast at Tè, located on the grounds of the Inn at Leola Village (38 Deborah Dr.), a former tobacco farm that’s now a rustic-luxe retreat ideally situated for exploring Lancaster County.