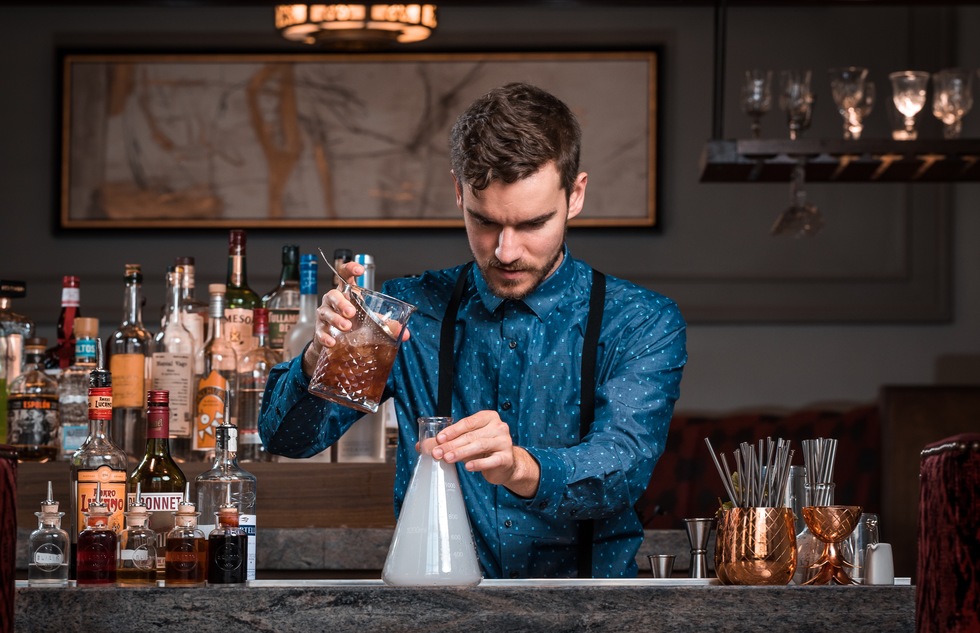 Cool Columbus: What to Do in the Midwest's Hippest City

“Don’t call it a hidden gem,” one resident of Columbus, Ohio, warned us when she found out we were poking around town for this story. She shouldn’t have worried—not because the city lacks rare and precious qualities, but because, for one thing, “hidden gem” is a travel writing cliché nobody should use (see also: “bucket list” and “breathtaking view”). And for another, it’s the height of coastal snobbery to describe a state capital with numerous corporate headquarters, the country’s third-largest university, and a bigger population than Seattle’s as “hidden.”

Maybe you just weren’t looking. But you definitely should—Columbus has trendsetting craft breweries and distilleries, first-rank cultural institutions, and a seemingly endless supply of artsy neighborhoods bursting with hip bars, restaurants, boutiques, and coffee shops. Forget “hidden gem.” This just might be the coolest city of its size in the United States. 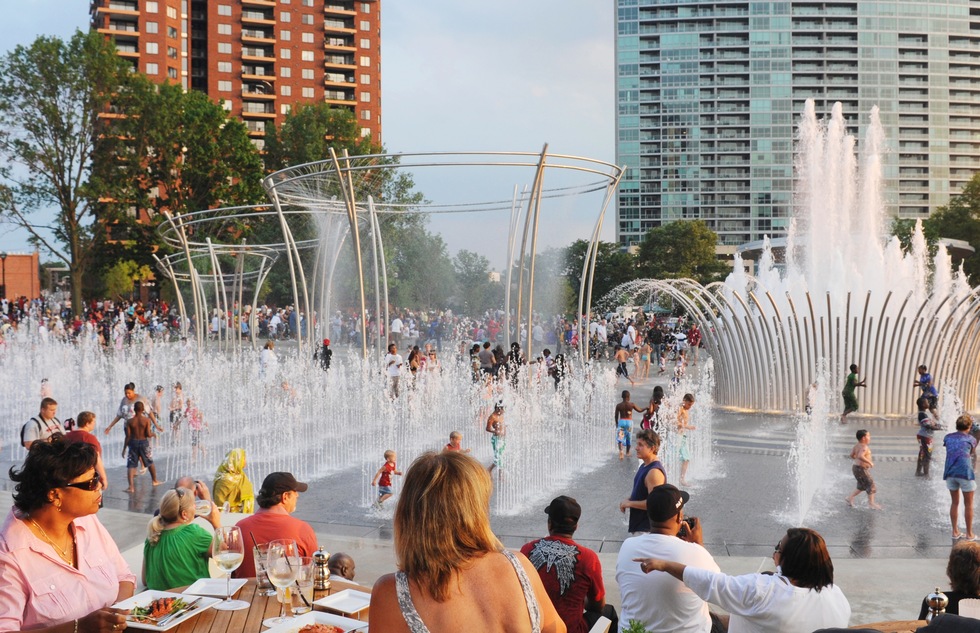 A good place to begin your explorations of downtown Columbus is the Scioto Mile, the result of a project to spruce up the banks of the Scioto (rhymes with “iota”) River with 175 acres of parkland, a promenade for strolling or biking, launches for kayaking, a 1,000-jet fountain for splashing (pictured), and a performance pavilion for arts-festing. Those last two features can be found in Bicentennial Park. It’s situated near the jewel of the city’s skyline, the Hotel LeVeque (50 W. Broad St.), an art-deco icon exuding Jazz Age sophistication. From the park, COSI, a kid-friendly science museum, is just across the Rich Street Bridge, where a bronze stag stands on his back legs and leans against the railing, as if contemplating the view (or having a George-Bailey-on-Christmas-Eve moment, if you’re of a dark turn of mind). Get a load of the view yourself from floor-to-ceiling windows at Milestone 229 (229 S. Civic Center Dr.), a contemporary comfort-food restaurant that calls to mind a grounded flying saucer. 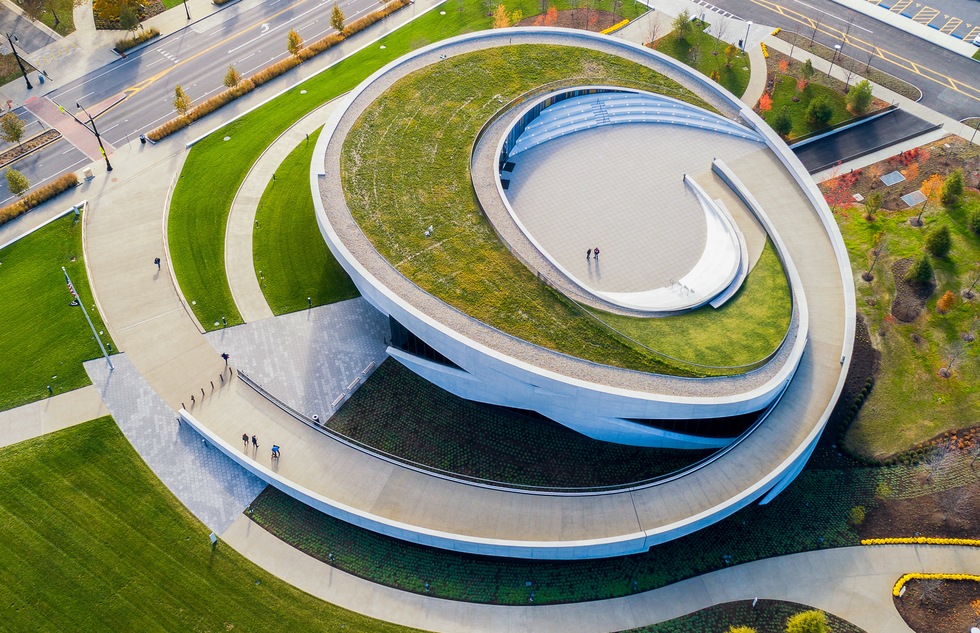 Andy Spessard
A Veterans Memorial on a Human Scale

Speaking of squat and circular, the nearby National Veterans Memorial and Museum (300 W. Broad St.) looks like what would happen if somebody lopped off the top few layers of the Guggenheim Museum in New York and planted turf on the roof. Opened in October 2018, Columbus’s riverside museum is the only national institution dedicated to service members from all five branches of the U.S. military, across all conflicts as well as in peacetime. Instead of focusing on generals and famous battles, intimate, bombast-free exhibits tell the stories of ordinary soldiers, sailors, pilots, medics, and others via photos, personal artifacts (foot lockers, letters, rations), and video testimonials. This emphasis on individuals not only reflects a wide range of backgrounds and experiences, but can also be incredibly moving. A foldup set of “trench checkers” from World War I and a Vietnam War vet’s description of the jungle—“hot, humid, smelly, beautiful”—bear witness to military life far more eloquently than a granite monument could. 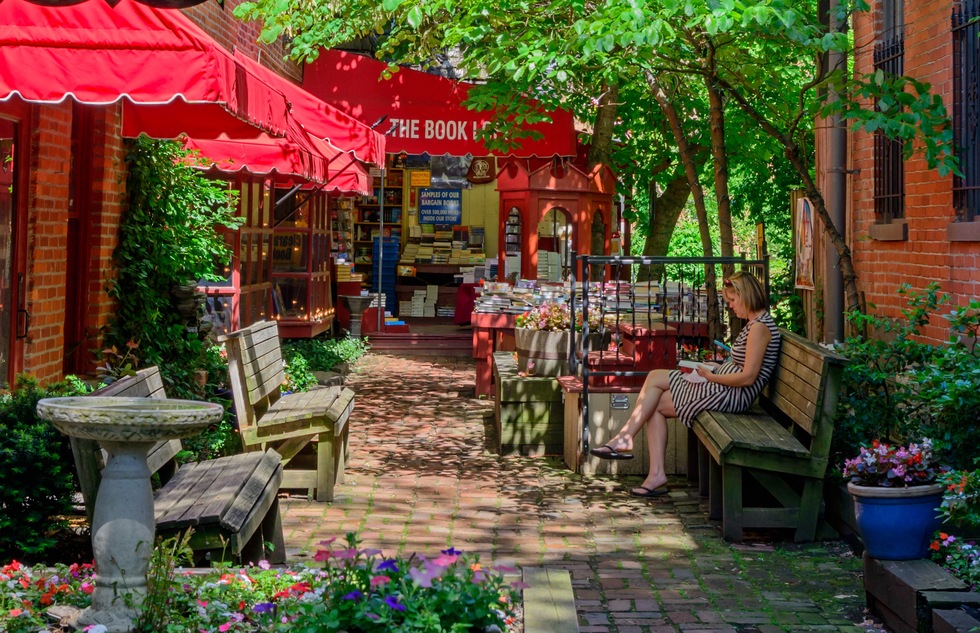 The city’s most walkable neighborhood lies just south of downtown. German Village has roots in the mid-19th century, when one in three Columbus residents was a German immigrant and many of them settled right here. They were evidently fond of red bricks, because they're everywhere—homes, businesses, and sidewalks, particularly on Beck, Mohawk, and Deshler streets, where you’ll see some impressively restored residential architecture. Traces of German-American culture remain at spots such as Schmidt’s (240 E. Kossuth St.), a “sausage haus” with origins in a meatpacking business established in 1886, and Schiller Park, where a statue of German poet Friedrich Schiller stands. But since the neighborhood’s revitalization in the 1960s, numerous independent businesses have moved in as well, many with an artsy or culinary bent, such as the area’s coffee shops (more on those in a minute) and the Book Loft (631 S. 3rd St.), a literary labyrinth where you can lose yourself in 32 rooms of books for sale. And we mean that literally. You will get lost. 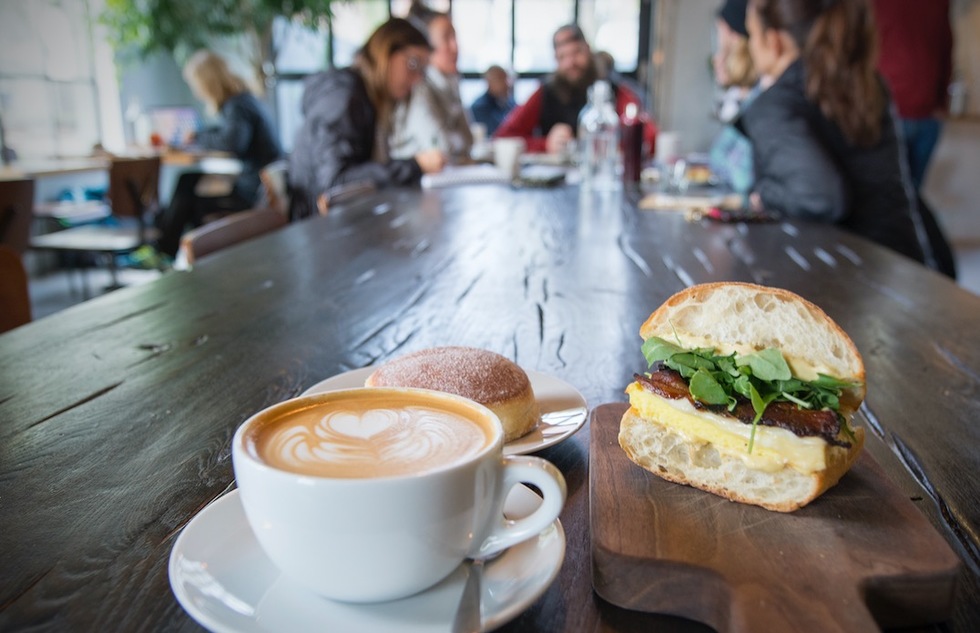 The fuel for a German Village walking tour should definitely be caffeine. If you ever make it out of the Book Loft, you can reward yourself by stopping in at the locally beloved Stauf’s Coffee Roasters (627 S. 3rd St.), located on the same block as the bookstore. Head south on 3rd St. and you’ll come to Winans (897 S. 3rd St.), where several generations of the same family have perfected handmade chocolates and espresso drinks. Whether or not you’re jittery from all that java, you also have to try rustic-chic Fox in the Snow (pictured; 210 Thurman Ave.) for a cappuccino and either a custard-filled donut or the renowned breakfast sandwich made with souffléd egg, candied bacon, Swiss cheese, and dijon cream on toasted ciabatta. To give you an idea of the hipster ethos of the place: The café’s name comes from a Belle and Sebastian song. “Fox in the snow, where do you go,” the lyrics ask, “to find something you could eat?” Right here, if the critter has any sense. 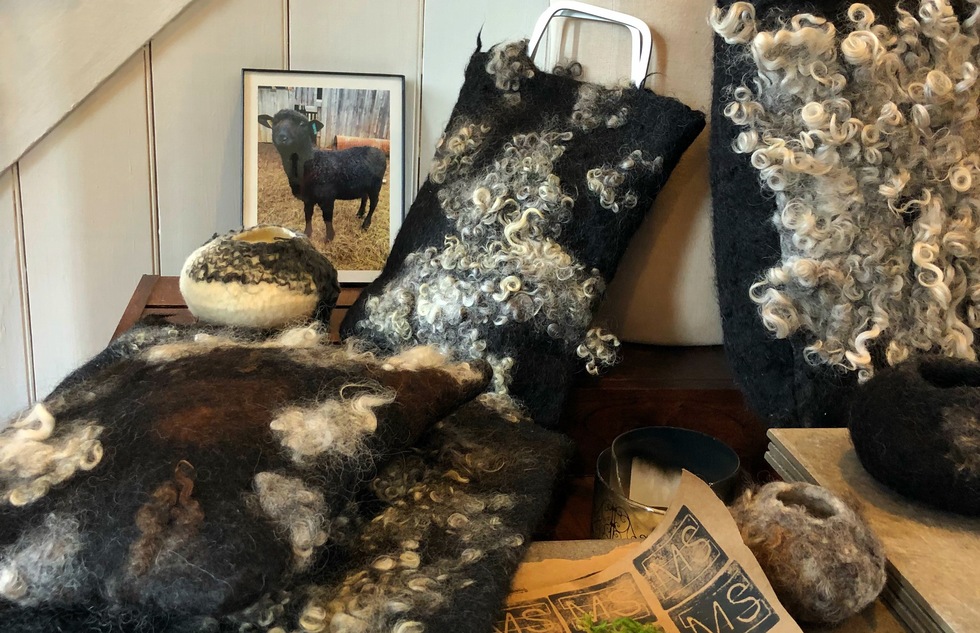 “This is Gandalf. This is Nutmeg. This is Bart,” fashion designer Celeste Malvar-Stewart will say while showing off her fuzzy couture creations at her German Village studio, Hangar 391 (391 E. Livingston Ave.), where she specializes in gauzy gowns felted with wool from local sheep—Gandalf, Nutmeg, and Bart among them. During daylong “farm-to-fashion” excursions (available through Hangar 391’s website), attendees can meet Malvar-Stewart’s livestock collaborators at a nearby farm, have brunch, and then return to the designer’s studio for a scarf-making class. According to Malvar-Stewart, you end up with not only a one-of-a-kind muffler but a deeper “connection to the stuff you wear.” And that’s a step, she says, toward more thoughtful, sustainable living. 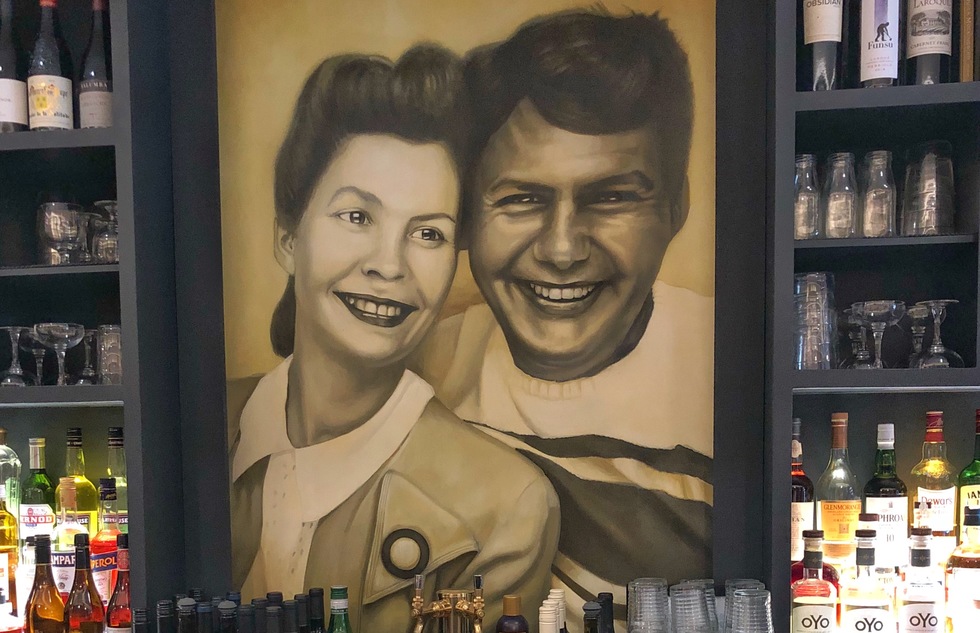 Another area with German roots is the Brewery District, situated west of German Village, many of whose residents established beer-making businesses here in the 19th century. Prohibition wiped those out in the 20th. Nowadays, the neighborhood’s South High Street is a strong choice for dining and nightlife. At Ambrose and Eve (716 S. High St.), co-owners Matt Heaggans and Catie Randazzo (her grandparents—the place’s namesakes—are pictured in the mural over the bar), update family-supper classics such as cornbread, fried chicken, ants on a log (braised celery with burrata and Castelvetrano olives standing in for the usual peanut butter and raisins), and a liver-and-onions dish that’s more like paté than the metallic-tasting abomination that has inspired many a turn toward vegetarianism. The restaurant is like a culinary version of alt-country music—downhome but indie. After dinner, have a sour beer at Antiques on High (714 S. High St.), a bar housed in a former antiques mall with a Mad Men–meets–The Brady Bunch vibe. 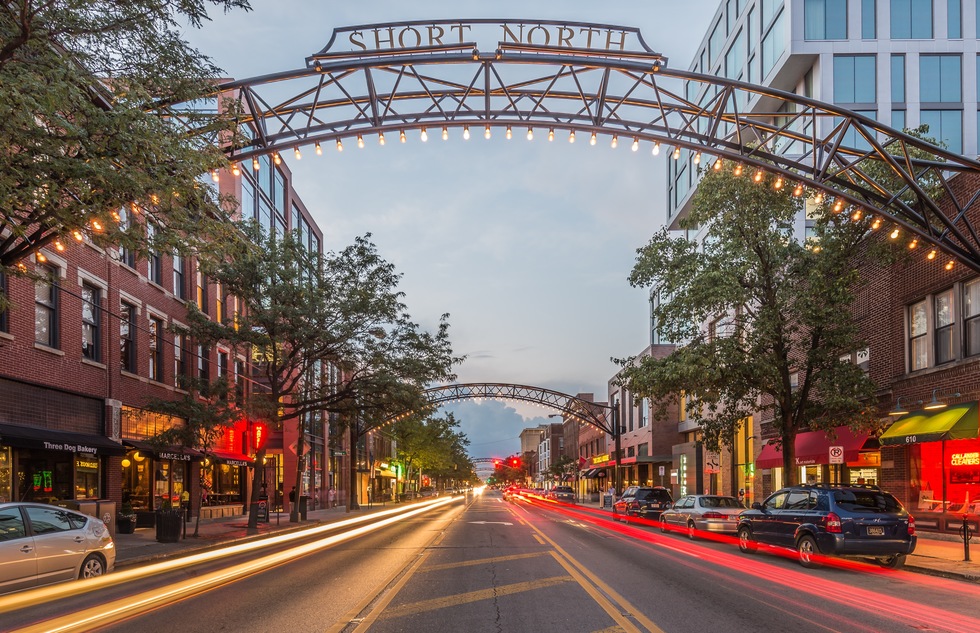 The undisputed capital of Columbus nightlife, though, is the Short North Arts District on the other side of downtown. And if you’re imagining a string of sports bars packed with overserved Ohio State undergrads, think again. Expect to encounter public artwork and stylish cocktail lounges frequented by the cool kids. Service Bar (1230 Courtland Ave.), part of the Middle West Spirits distillery, wouldn’t be out of place in the hippest quarters of Brooklyn or San Francisco (a bar tab that doesn't require a second mortgage is the only tipoff). Possibly even better than the drinks in this white-tiled, retro-industrial space are chef Avishar Barua’s playful menu items that elevate junk food—Big Macs, pork rinds—with fine-dining techniques and South Asian flavors. Trust us, it works. Come back to the Short North during the day to visit a multitude of art galleries, shop at independent boutiques, and indulge in a frozen treat at Jeni’s Splendid Ice Creams (714 N. High St.), a company, by the way, that originated in Columbus. 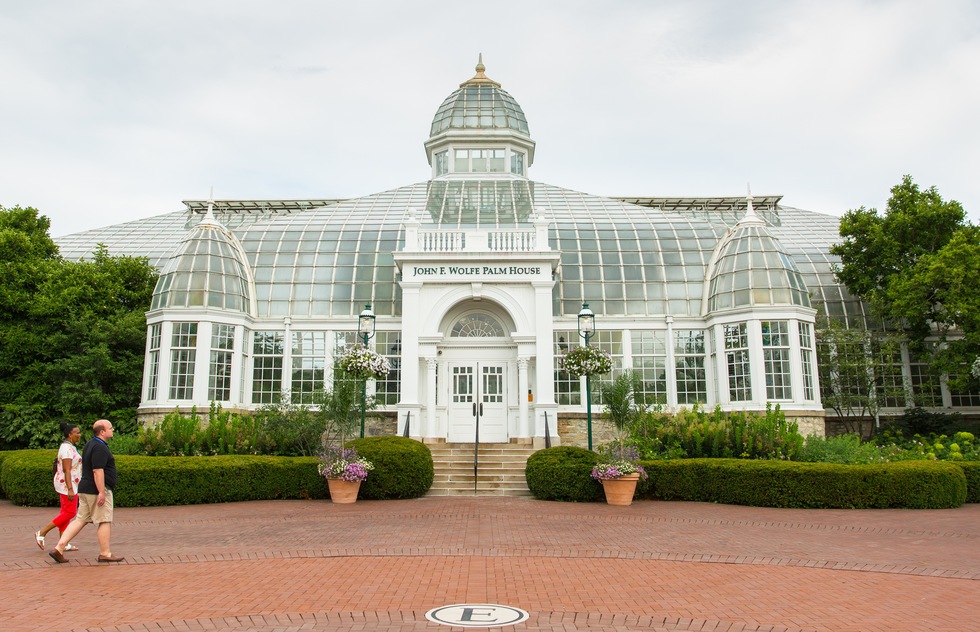 We figure you could use a breather from all the barhopping we’ve been doing. A nice spot for a break is the Franklin Park Conservatory and Botanical Gardens on the east side of town. Set amid 90 acres of green space—including parkland as well as gardens to please kids, landscaping nuts, and food growers—a grand, glass-topped greenhouse, constructed in 1895, contains hundreds of plant species in rooms representing an ecological range from desert to rainforest. You can also check out a bonsai collection, special exhibits, and (inevitably, this being a botanical garden) colorful glass creations by Dale Chihuly. The conservatory’s facade becomes the canvas for an elaborate light show every evening at dusk. 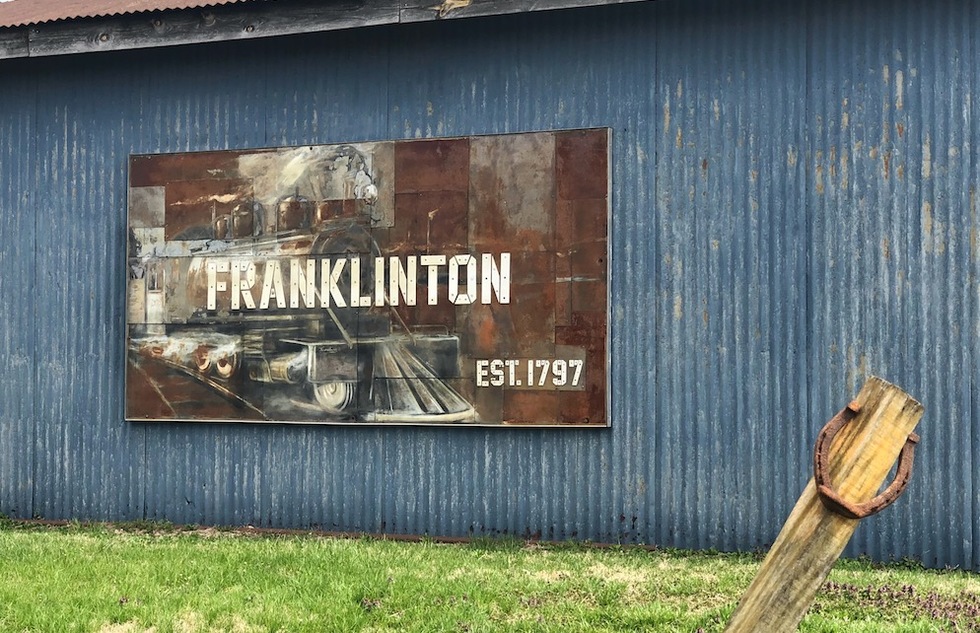 Because of its low-lying and historically flood-prone land, the neighborhood of Franklinton, west of downtown, is nicknamed the Bottoms—though before the area’s recent redevelopment, the sobriquet has also been used, degradingly, to refer to the poverty often experienced on this side of the Scioto River. A floodwall, finished in 2004, took care of the natural threat. Art and beer, meanwhile, are making the place more attractive to professional and creative types. A bunch of new galleries, a “maker space” called the Idea Foundry, and breweries now occupy abandoned factories sporting fresh murals and abutting food trucks. You can take a walking tour from Columbus Brew Adventures for a detailed rundown of the changes as well as stops at new pubs and craft beer taprooms operated by Land-Grant Brewing Company (424 W. Town St.) and Scotland’s BrewDog (463 W. Town St.).

That’s the same company that operates a brewery and 32-room beer-themed hotel in Canal Winchester about a half-hour drive outside of town. Known as the DogHouse, the hotel has in-room taps and beer-stocked fridges in guest showers. In other words, even Columbus’s suburbs are cool.