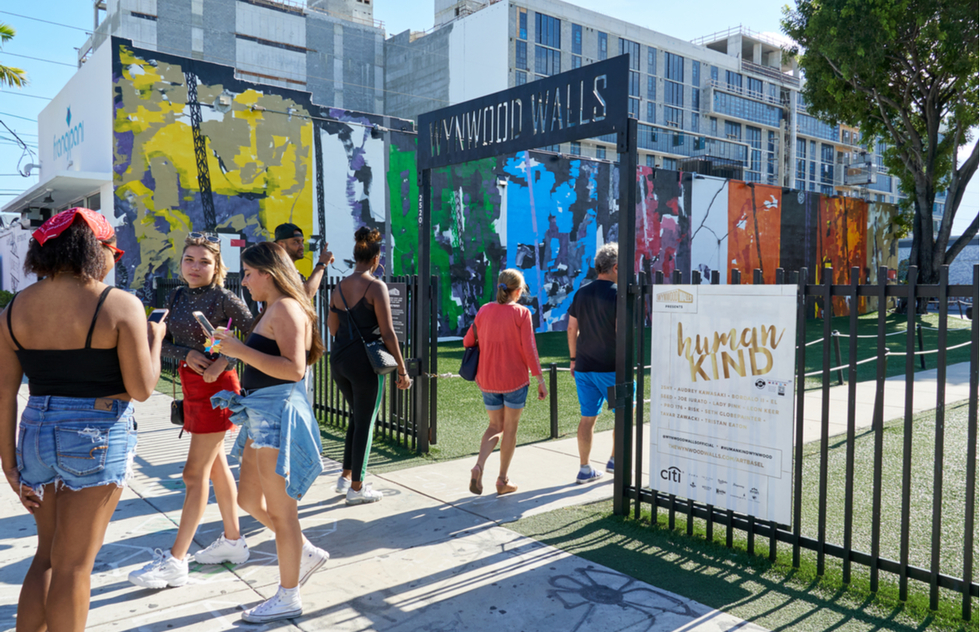 Beyond the Beach: Fun Things to Do in Miami Without Showing Off Your Abs

In 1961, Frommer’s Miami and the Caribbean on 10 Dollars a Day (the mind boggles) describes the South Florida city as a pastel-hued land of “unheard-of luxury.” Next to “giant seaside hotels whose splendor would rival the palaces of an Assyrian king,” the guidebook tells us, sunbathers laze on “cabana-dotted beaches” until sundown, when they partake of the “frenetic” nightlife while wearing “plaid dinner jackets” and “mink stoles.” Apparently, not everybody stuck to that $10 budget.

Today, the popular image of Miami has expanded to include hips swiveling to Latin music and intimidatingly plentiful displays of six-pack abs. But the picture still boils down to beaches and bars. When you need a break from those, the city and the wider Miami-Dade County cover more than 30 different localities, many of which have their own kinds of rewards distinct from parties and palm trees. There are diverse cultural districts, vibrant displays of street art, and, in the Everglades, one of the world’s most unique ecosystems. And you can experience all of that (including what follows) without setting foot indoors. 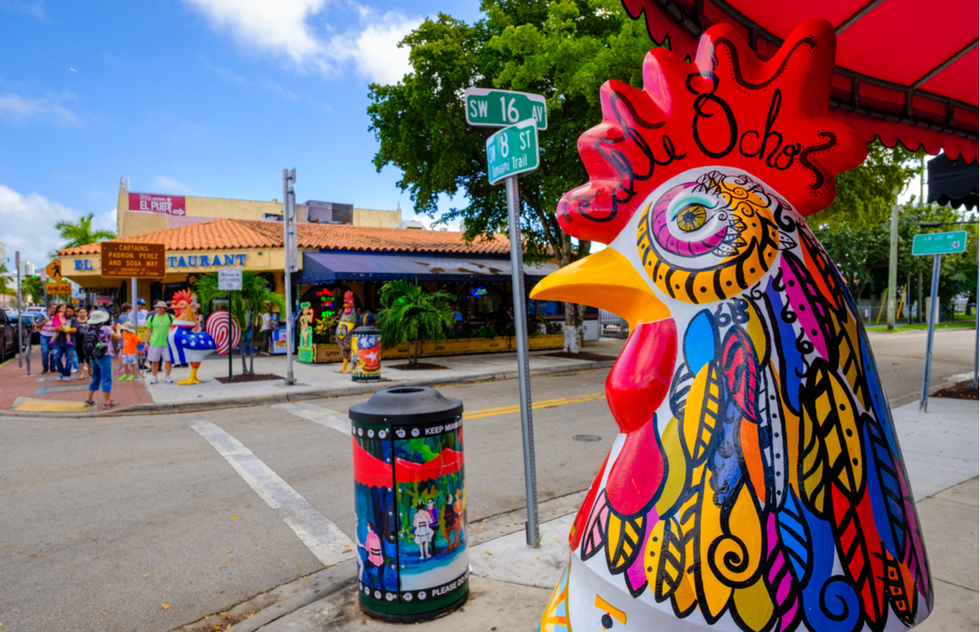 If you ask us, the city’s most promising tour guide is the stone-faced tween who stopped his bike when he encountered the HistoryMiami-led walk we took through Downtown and Overtown. “This is where all the raccoons live,” he deadpanned, interrupting our actual guide’s spiel about a boarded-up historic home. “There’s like a hundred in there.” That perhaps tells you something about the tough economic times that this predominantly African American area has endured. But Overtown is also rich in history—it’s home to the Lyric Theater, played by everybody from Louis Armstrong to Aretha Franklin (call ahead to see the archives)—as well as soul food restaurants and hip businesses such as the Copper Door B&B, housed in a refurbished hotel once favored by musicians passing through town.

HistoryMiami, whose photo-packed museum tells the city’s story in the shadow of the towering courthouse downtown, escorts visitors on similarly enlightening walks (in English or Spanish) through many other neighborhoods as well, such as Little Havana (pictured), with its cigar-rolling artisans, salsa clubs, and parks filled with locals playing dominoes; and Little Haiti, a Caribbean-flavored swirl of markets, public art, and botánicas dispensing spiritual goods and folk remedies. 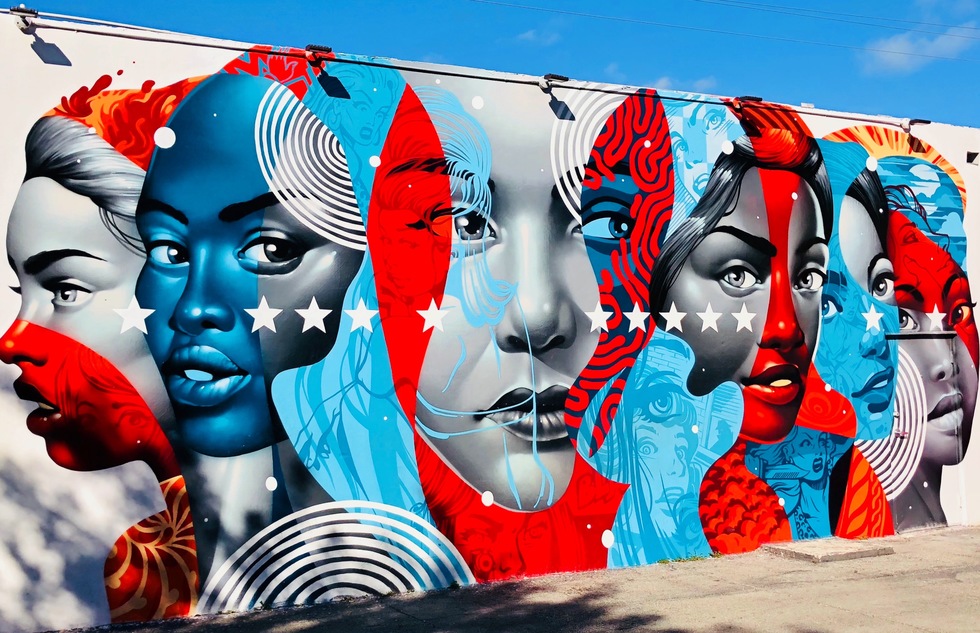 Another worthwhile walk for the culturally curious—and an obligatory stop for aspiring Instagram influencers—is Wynwood Walls, an eye-popping collection of murals painted by the world’s preeminent street artists on the facades of several former warehouses. Visitors making their way through the riotously colorful complex may feel like they’re riffling the pages of a graphic novel tossed aside by an especially with-it giant. The ephemerality of murals that fade and are frequently painted over, along with the elevation of a sometimes maligned form, create an immediacy and democratic spirit (helped along by free admission) that traditional art museums often struggle to cultivate. Since the opening of Wynwood Walls in 2009, the mood has spilled into the surrounding neighborhood, turning Wynwood into a kind of tropical Brooklyn chockablock with galleries, craft breweries, coffee shops, trendy restaurants, and quirky boutiques. A good number of them sport their own spray-painted exteriors. 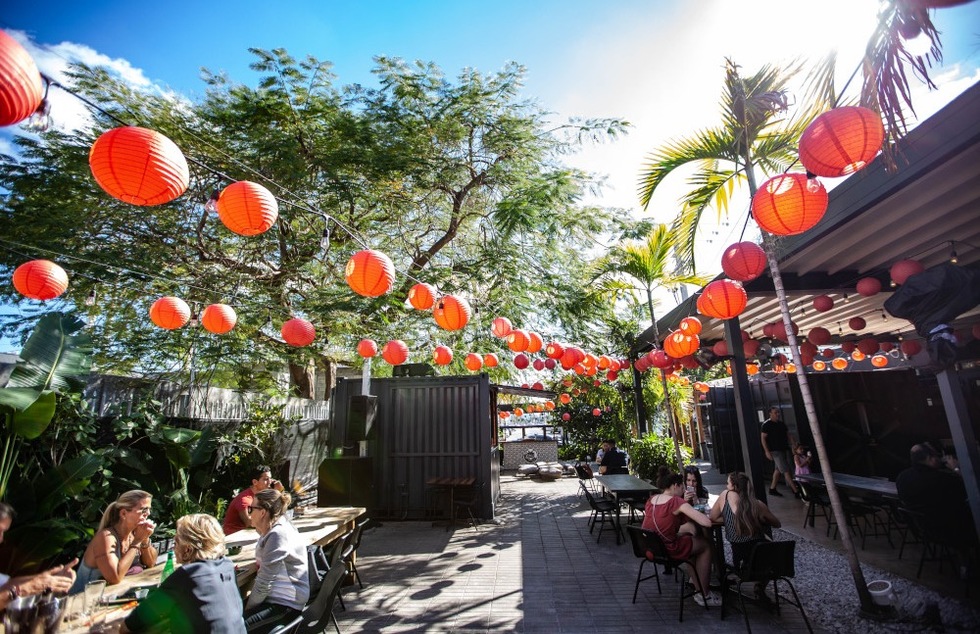 Provided by the Greater Miami Convention & Visitors Bureau www.gmcvb.com
Outdoor Dining: Where to Eat on the Street

Now let’s take advantage of a Miami perk that those of us who live in northern climes can only envy: year-round outdoor dining. Miami’s seemingly inexhaustible supply of pleasant places to stuff your face in the open air ranges from posh rooftops overlooking Biscayne Bay to relaxed sidewalk cafes in garden-filled Coconut Grove to prime people-watching patios amid the high-end shops along South Beach’s pedestrian-only Lincoln Road, South Florida's answer to Rodeo Drive. (The only rub is, the paltry state of the region's public transit means that you have to drive to each neighborhood and save your walking around for when you get there.)

To stick with our non-beachy theme, follow your Wynwood art binge with a visit to 1-800-Lucky (pictured), an Asian-themed food hall where the courtyard’s metal and concrete surfaces are softened by string lights and leafy plants. The hall gathers together outposts of seven well-regarded local Asian restaurants serving up ramen, sushi rolls, pork buns, poke bowls, dumplings, and desserts. The outdoor bar mixes creative cocktails—one of them tastes like a boozy take on bubble tea, only with bursts of fruity flavor instead of sticky tapioca balls. 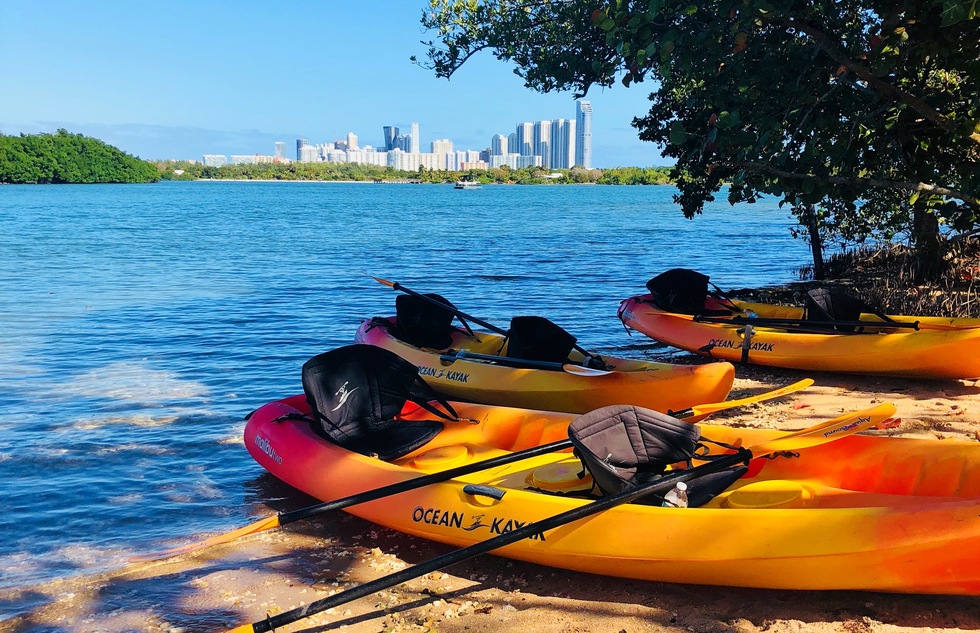 Amid the urban streetscapes we've seen up to now, it’s easy to forget that Miami’s natural surroundings are characterized by swampy plains and mangrove-lined waterways. But you can get a reminder by visiting Oleta River State Park north of Miami Beach. On one of the guided kayaking excursions from the onsite Oleta River Outdoor Center, we navigated narrow inlets cutting through the 1,000-acre reserve's dense thickets where non-native iguanas sat on low-hanging branches. Then we turned a corner and discovered that Downtown’s skyscrapers were still very much visible. Midway through the tour, our group stopped at a speck of an island with views that encompassed water, woods, and skyline all at once. 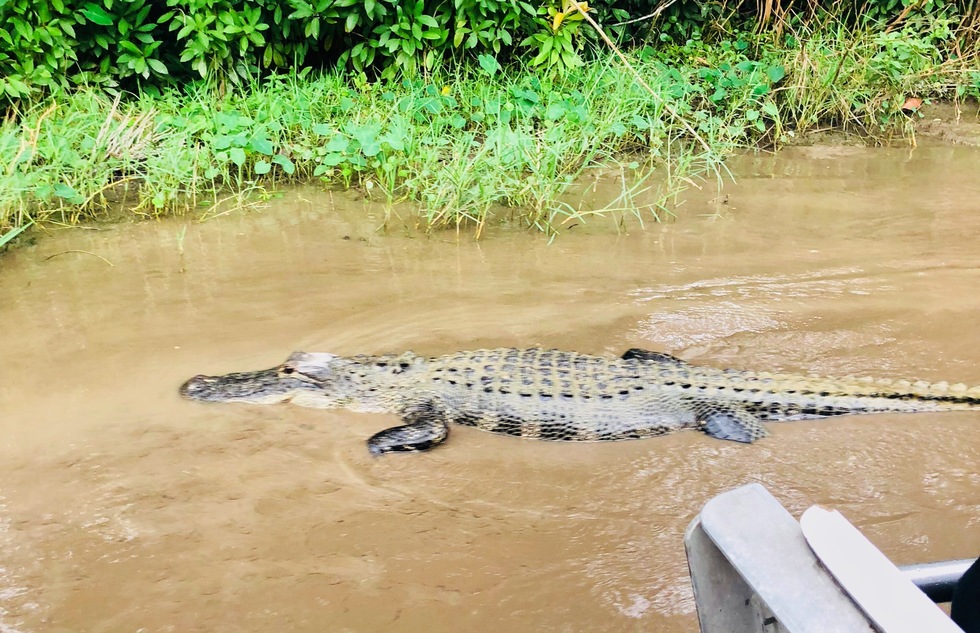 To find a natural setting that feels more remote, venture into the Everglades, the vast and environmentally fragile wetlands on Miami’s western edge. The suburb of Homestead (about a 45-minute drive southwest of Downtown Miami) is a gateway to them as well as to the coral reefs and tiny islands of Biscayne National Park to the east. There are swampy attractions both inside and outside the bounds of Everglades National Park, with the ones inside more strictly devoted to education and ecological preservation. Outside the park is where you go for loud, fan-propelled airboat tours from operators such as Everglades Alligator Farm and Miccosukee Indian Village, located on the land of the native Miccosukee people, who also maintain a cultural museum and a casino.

Gator sightings are pretty much guaranteed on airboat tours. When the pilots feel like dispensing some thrills, the ride feels like doing donuts with a car in your high school’s parking lot, only with herons overhead and grassy marshland below. Back at the Everglades Alligator Farm’s home base, an unsettling crop of reptiles maintains a perfect stillness by a pond, waiting to literally snap into action at feeding time. In another part of the facility, visitors have the opportunity to hold snakes. Reader, we declined. 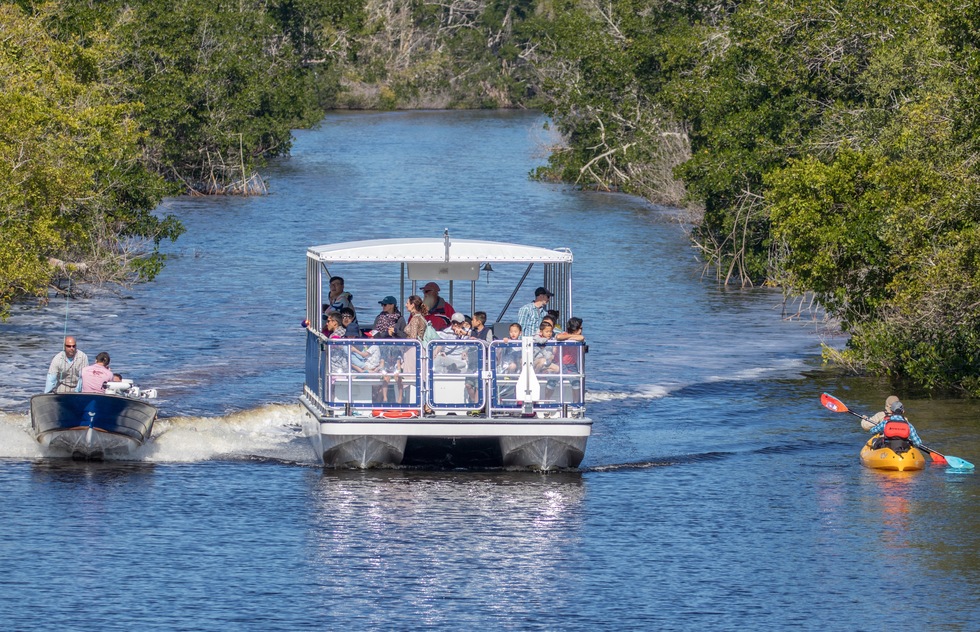 For a more sedate but also more informative ride inside Everglades National Park, book a guided back-country boat tour from Flamingo Adventures. Launching from the park’s Flamingo Visitor Center, sightseeing boats glide through brackish waters tinted a rusty shade by dangling mangrove roots. Guides point out birds, alligators, crocodiles (the Everglades is the only place where the two coexist), and, if you're lucky, the occasional manatee. Biking, hiking, kayaking, and ranger-led nature programs are other ways to explore the park. You can even stay overnight in one of Flamingo Adventures' “eco-tents,” which are permanent canvas structures furnished with beds, chairs, and dressers. The units are affordable and several steps above traditional camping. After all, do you really want to sleep on the ground in a place crawling with alligators? 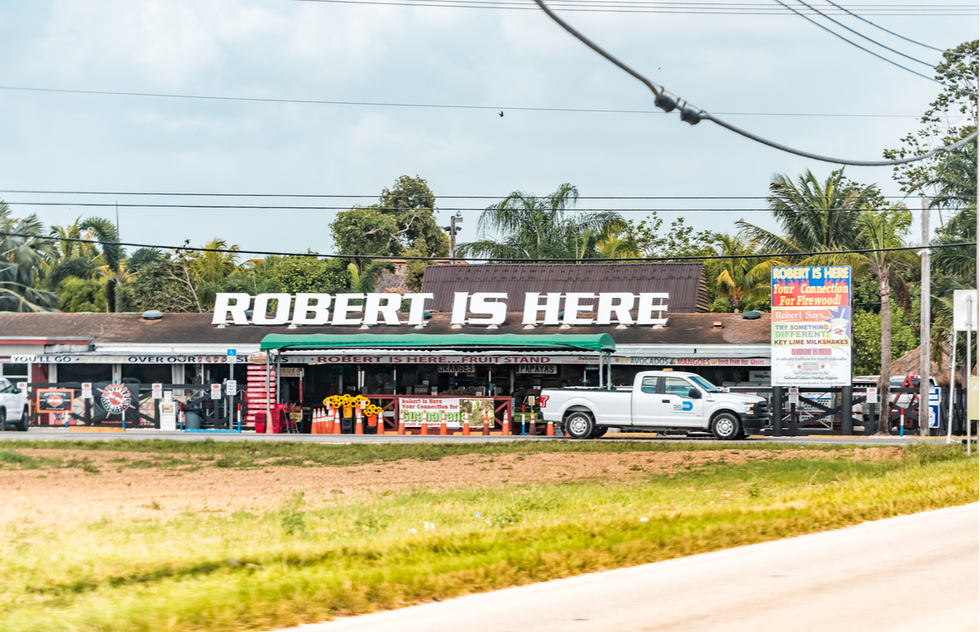 We’ve got one last stop before releasing you back to the seaside Art Deco hotels and glamorous nightspots of South Beach. Homestead’s Robert Is Here fruit stand dates back to 1959, when 7-year-old Robert Moehling began selling produce from his family’s farm under a roadside sign announcing his presence. All these decades later, the family is still here, though the stand has expanded into a big market with an animal farm and kids’ play area out back. In addition to giving you a taste of the area's agricultural background, Robert Is Here provides a chance to introduce yourself to all sorts of rare fruits, including the canestel, guanabana, mamey sapote, sapodilla, and a bunch more we had never heard of. Before you leave, you have to stop at the milkshake counter for a creamy concoction enhanced by fresh merchandise—the most popular flavor is sweet-and-sour key lime.

Okay, now you can go back to the beach.

Note: The Miami tourism office invited Frommer’s to the city to research this story, but all opinions are our own and were not shared in advance of publication.