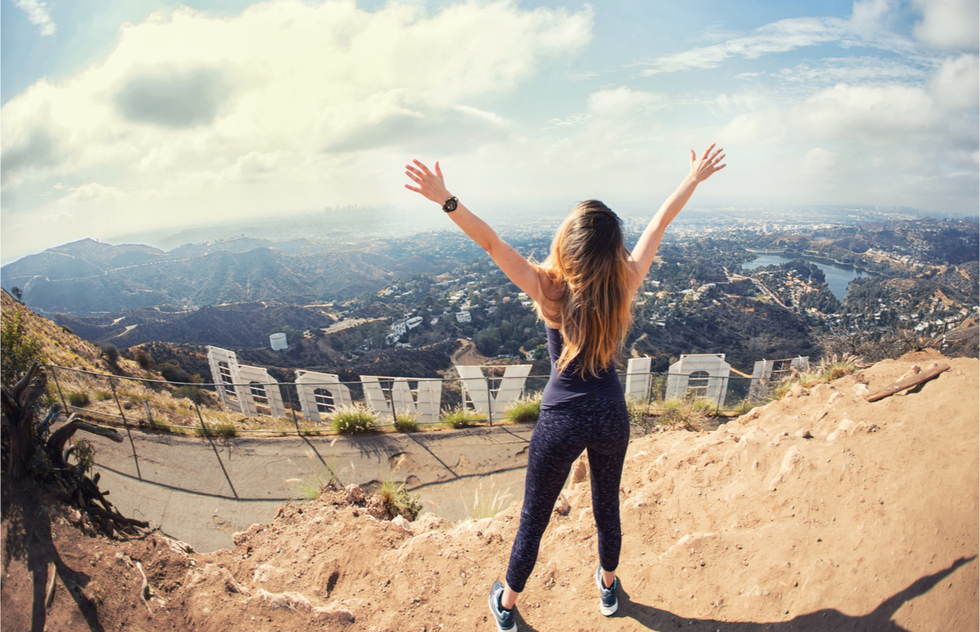 8 Ways to Reach the Hollywood Sign: Hikes, Views, and Drives

“So, how do I get to the Hollywood Sign?”
Since it first appeared in the Santa Monica Mountains reading “Hollywoodland” in 1923, the sign has acted as a beacon. First, it attracted hopeful homeowners into buying plots in the Hollywoodland housing development, then it became a symbol of the American entertainment industry, and now, somewhat to the consternation of Angelenos, it’s a global tourist symbol of Los Angeles itself.
People come from all over the world to Southern California, and they want to see those big white letters they’ve dreamed about—but because the sign is in a tricky location atop a mountain with no address and no parking spaces, it hasn’t always been easy to figure out how to do that.
Here are some of the best places to get your view of one of the most famous signs on the planet.
This feature is adapted from Casey Schreiner’s book Discovering Griffith Park: A Local's Guide, which also includes trail maps, history, and details about the rest of Los Angeles’ 4,310-acre Griffith Park. 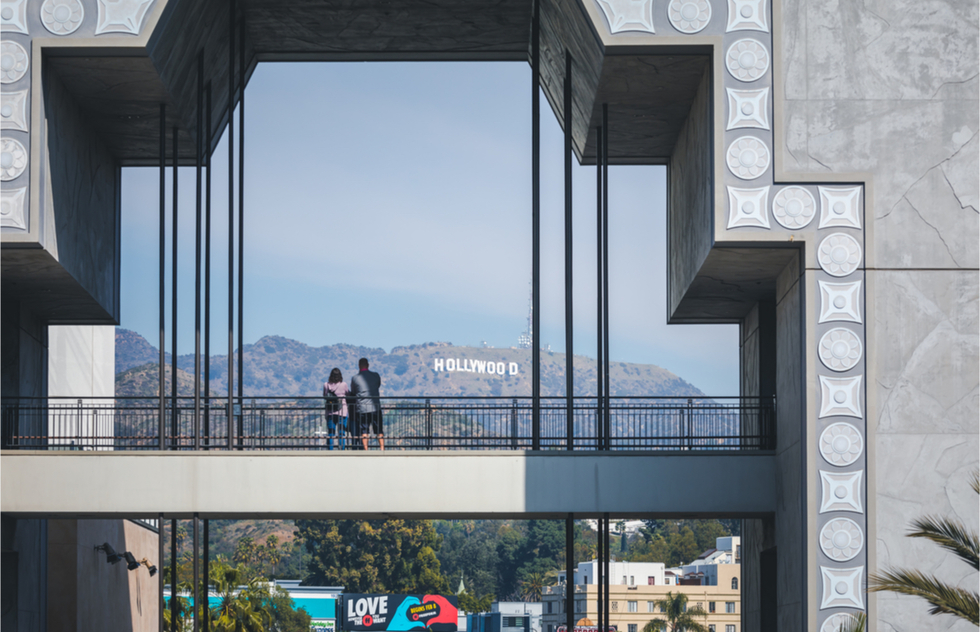 Shutterstock
Hollywood & Highland
One of the easiest places to see the Hollywood Sign is not even inside Griffith Park—it’s at the Hollywood and Highland shopping-and-entertainment complex.

This area in the heart of Hollywood is especially easy to access by public transit (Metro stop: Hollywood/ Highland) and it’s within walking distance to other landmarks like the El Capitan and Chinese theatres, the Dolby Theatre (home of the Oscars), Musso & Frank Grill, and the Hollywood Roosevelt Hotel. The shopping center itself is styled to look like the set of the 1916 film Intolerance, and the outdoor spaces of the upper levels are angled directly at the Hollywood Sign. 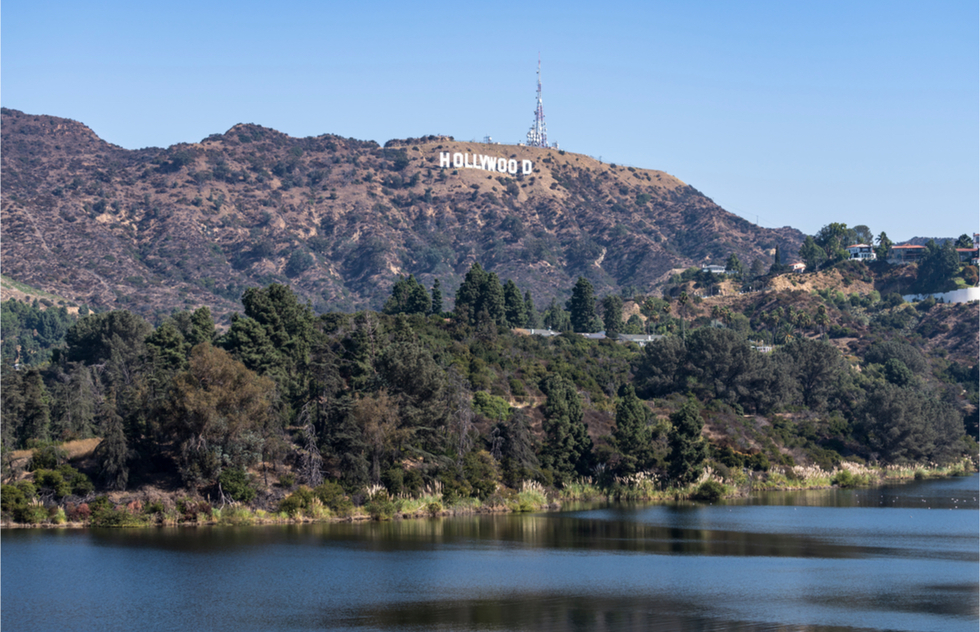 trekandshoot/ Shutterstock
Hollywood Reservoir and the Mulholland Dam
Walk along the paved, flat path surrounding the historic Hollywood Reservoir for a lovely time in the California outdoors and some of the most interesting views of the Hollywood Sign you’ll see anywhere. This area is on land managed by the Department of Water and Power, so rules and hours are different than in Griffith Park itself. 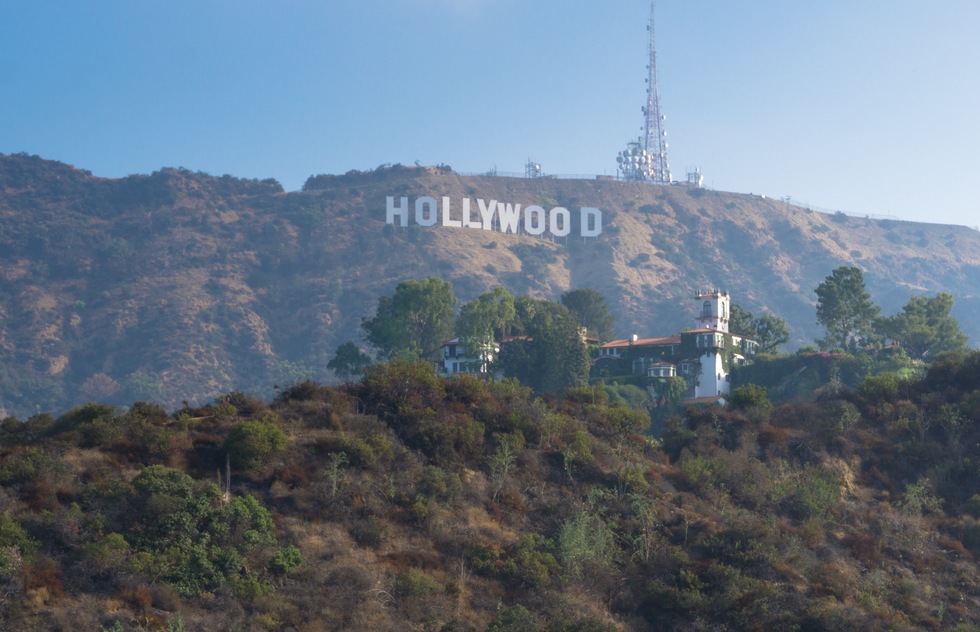 Casey Schreiner
Mulholland Highway
Don’t worry about the highway in the name—this is a dirt-road section of a never-completed stretch of the famous Mulholland Drive.

Parts are paved, but the majority is a dirt road inside Griffith Park, free of any traffic that isn’t of the two- (and sometimes four-) footed variety. Mulholland Highway is also a great way to get some views of the historic homes of Hollywoodland without being part of the snarl of tourist vans that crowd nearby Lake Hollywood Park. Access this area using Canyon Lake Drive from the north or Weidlake Drive from the south. (If you need more detailed directions for this short hike, it's explained in Discovering Griffith Park.) 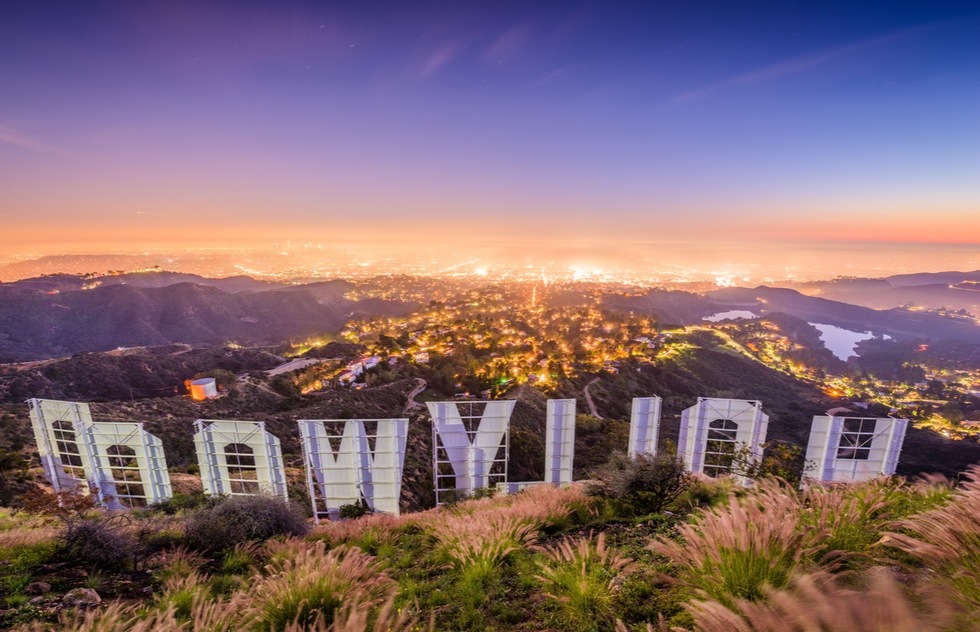 Sean Pavone/ Shutterstock
Atop Mount Lee
The Hollywood Sign sits atop Mount Lee (1,820 feet above sea level) and not, as most visitors assume, atop Mount Hollywood, which is to the east.

Visitors may also like to know that there is no way to walk beneath the actual sign itself, but summiting Mount Lee using wide, easy roads and trails will get you behind the sign with some knockout views of the city. There are a few different ways to reach this peak and get behind the letters—from short and tough to longer but gentle (Discovering Griffith Park includes trail maps for hikers)— but any way you approach it, it’s a day well-spent in Griffith Park. 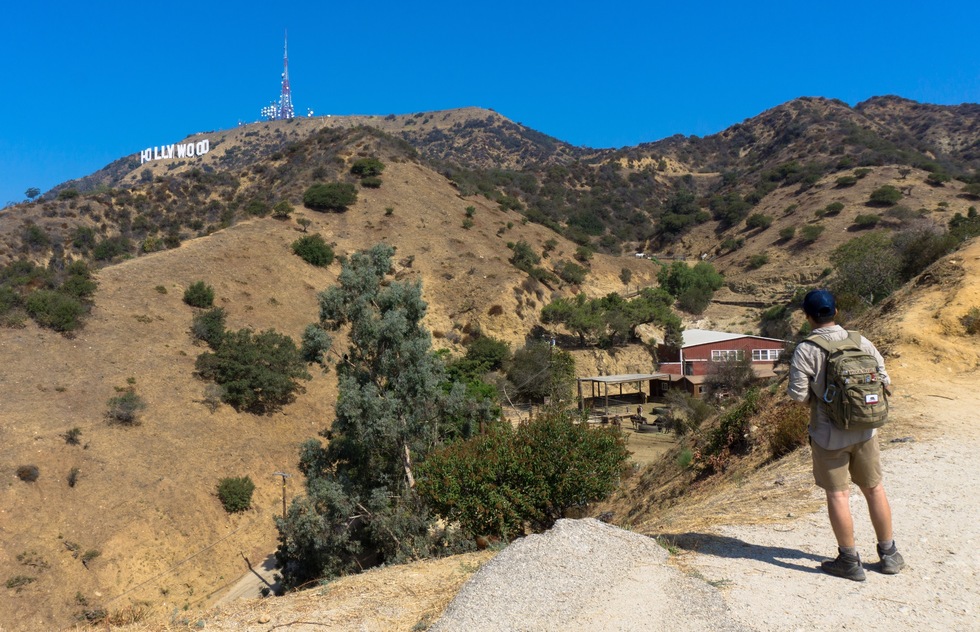 Casey Schreiner
Hollyridge
The overlook on the Hollyridge Trail from Beachwood Canyon used to be one of the easiest and best views you could get of the Hollywood Sign, but an influx of tourists and traffic into the nearby residential canyons brought lawsuits and snuffed out the easy route. You can still reach this vista point with a longer hike from Canyon Drive, where there's a small parking lot, and the trail still provides a nice front-facing view if you don’t want to summit Mount Lee. 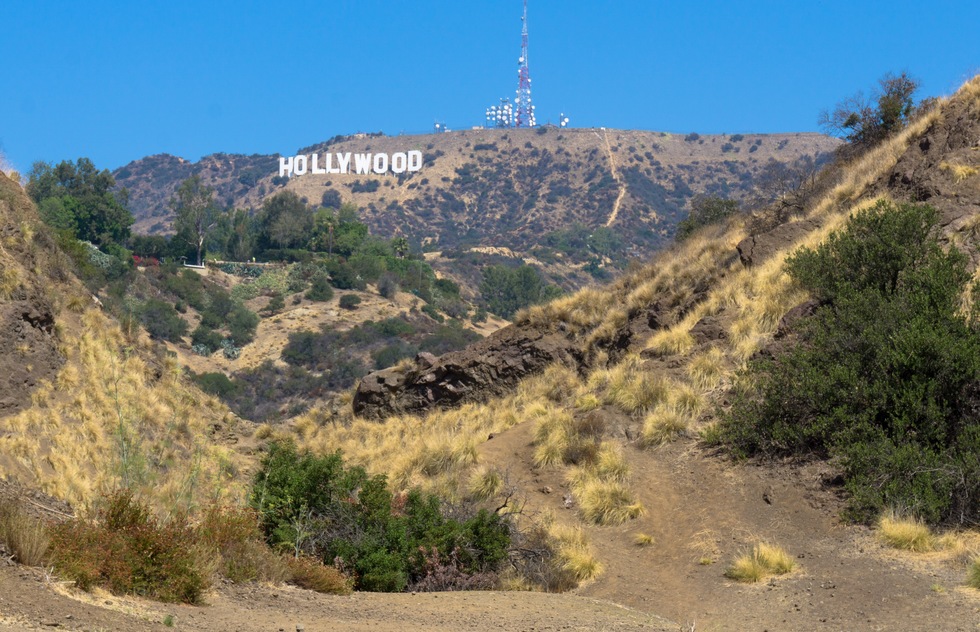 Casey Schreiner
Bronson Cave
Griffith Park has been used as a backdrop in countless films, television shows, and commercials, but few places in the park have been as heavily photographed as the Bronson Cave, on Canyon Drive. This remnant of a former quarry is perhaps best known as the Batcave from the original TV series Batman, but it also appeared in The Searchers, Army of Darkness, and Julius Caesar. It also happens to have one of the most rugged views of the Hollywood Sign at its endpoint. 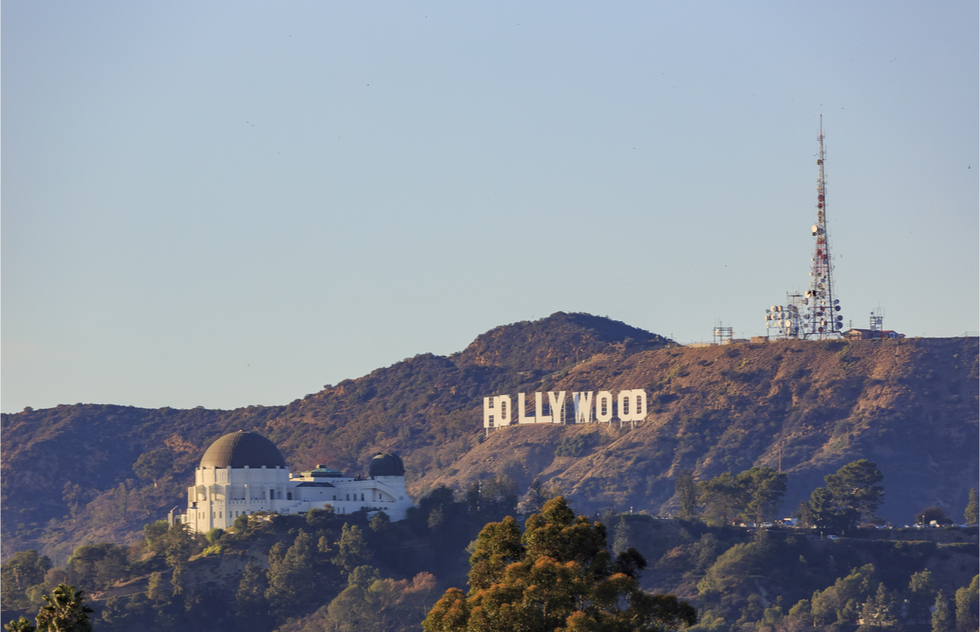 Kit Leong/ Shutterstock
Griffith Observatory and Berlin Forest
The city's official Hollywood Sign viewpoint is just outside the Griffith Observatory, a beautiful landmark in its own right served by parking lots and public transport. Unfortunately, this official designation means it’s also generally the most crowded—and the angle of view isn’t even that great for photos. If you’re visiting this part of the park but want to get a bit more solitude and shade, take a short hike into the Berlin Forest, a small pine grove that was planted slightly uphill from the Observatory by visiting German dignitaries. 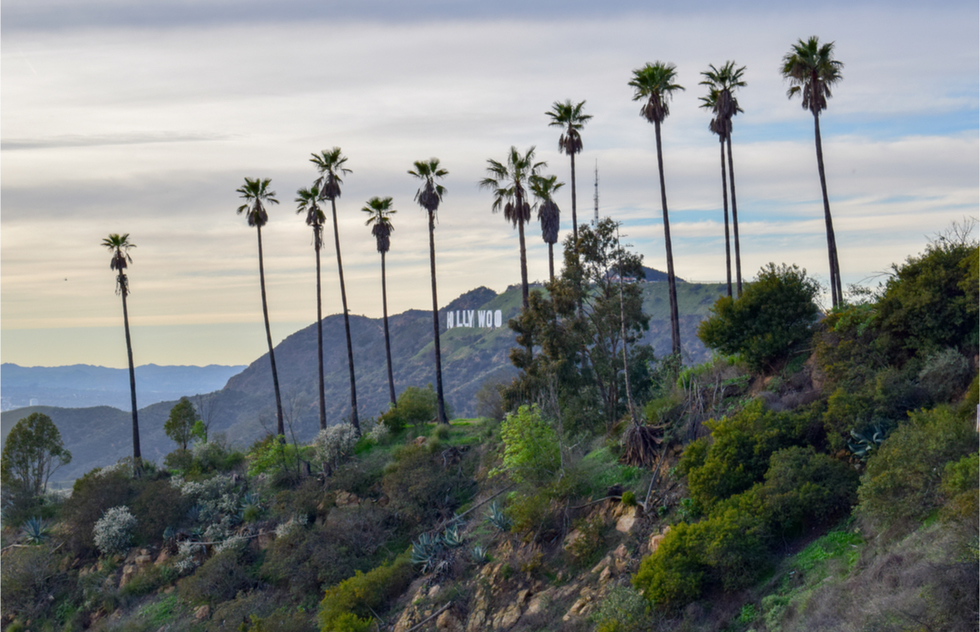 Mathieu Le Mauff/ Shutterstock
Tiffany and Co. Foundation Overlook
In 2010, the Tiffany and Co. Foundation was one of several large donors that helped protect nearby Cahuenga Peak from housing development by adding it to Griffith Park proper. They also built a commemorative viewpoint with stone slab seating on the Mount Hollywood Trail, a bit beyond the Berlin Forest. It’s a great hike from the Observatory or a lovely pit stop on the way to the summit of Mount Hollywood, and although it can get crowded, folks tend not to linger too long.

This photo is of the Captain's Roost area, which is also accessible a little farther along the Mount Hollywood Trail. Everything is labeled on wayfinding signs posted along the trail. 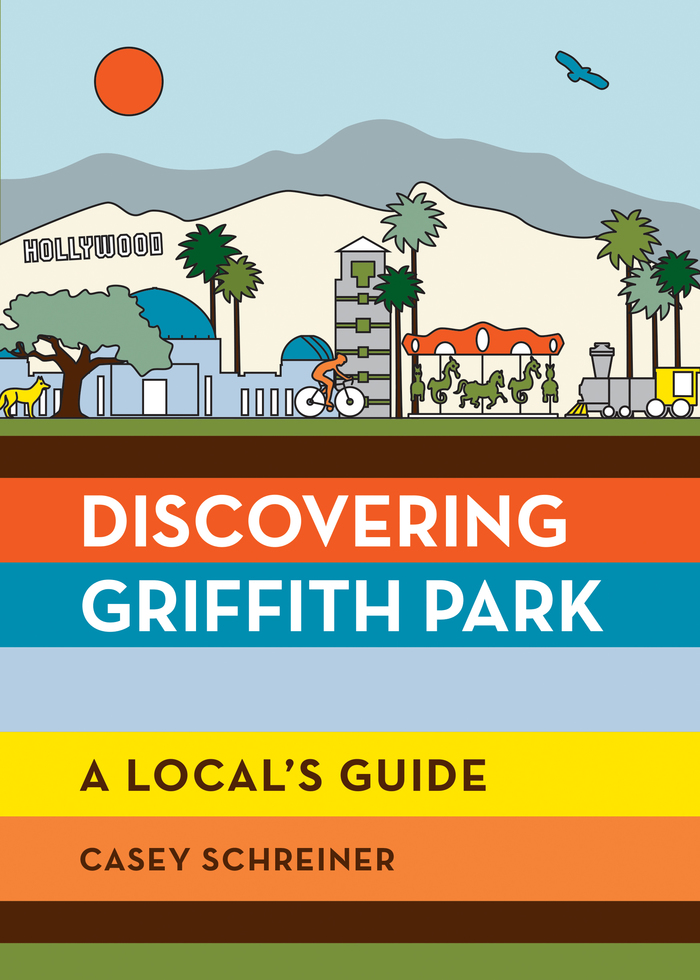 Mountaineers Books
Discovering Griffith Park: A Local’s Guide
You can get detailed directions to all these viewpoints for the sign—and several others—along with maps of everything in Griffith Park in Casey Schreiner's Discovering Griffith Park: A Local’s Guide. The first in-depth guidebook (240 pages) for this world-famous park, the book features tips on how to get around, the best ways to visit the park's museums and other attractions, and thorough information on 33 different hiking routes.