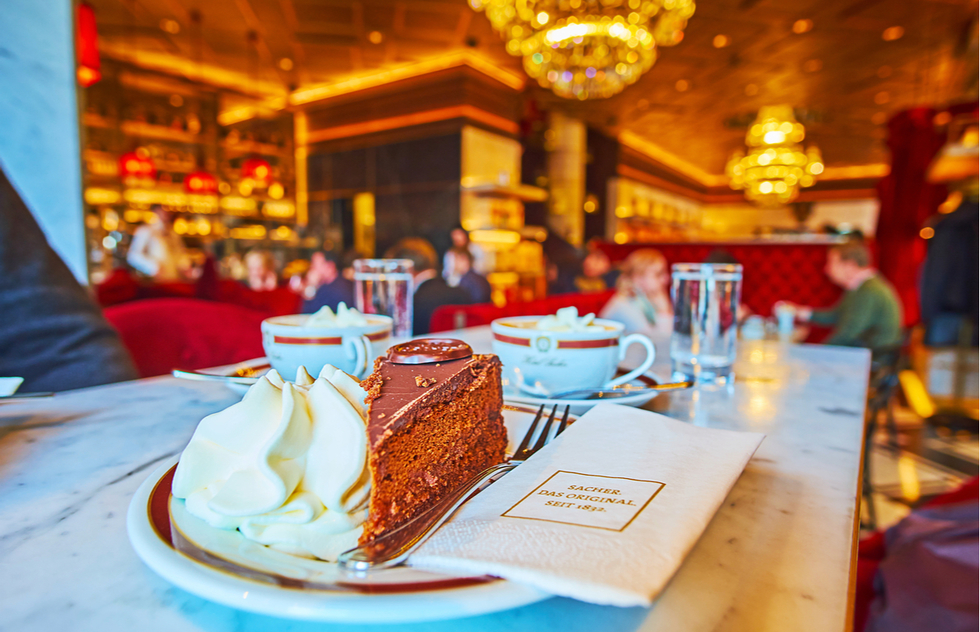 This may surprise you, but lots of world-famous desserts originated in hotel restaurants. Boston cream pie came from the Omni Parker House in Boston, peach melba from the Savoy in London, the tarte Tatin from the Hôtel Tatin in Lamotte-Beuvron, France, and, though some Southerners might dispute the claim, red velvet cake was born at the Waldorf Astoria in New York City. While several kitchens that created iconic recipes choose to keep them secret—trust us; we asked—Frommer's persuaded many other great hotels to share with us instructions for making their most popular sweet treats. Some of them are icons (like the original Sacher-Torte from Vienna's Hotel Sacher, pictured above), others are newer confections, and still others put distinctive spins on regional specialties. All are droolworthy. Use these recipes to relive memorable vacations at home or send your taste buds to places you've never been before.

Recipes have been edited for length and clarity. To help you prepare certain dishes at home, we've provided substitutions for rare ingredients and specialty equipment. 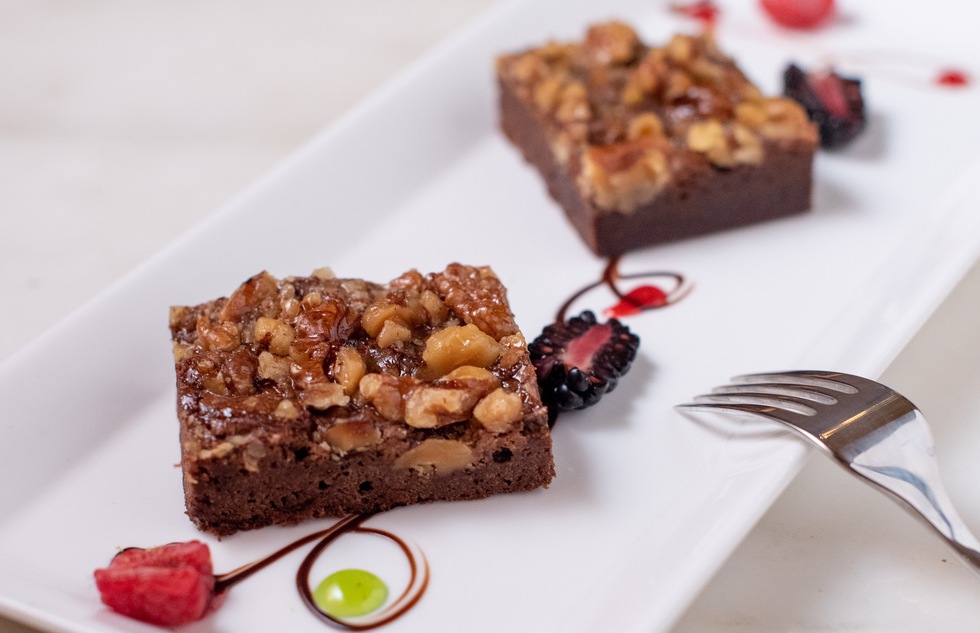 Hotel's description: "The first reference to the brownie in America appears in the Sears, Roebuck and Co. catalog published in Chicago in 1898. Specifically at the direction of Bertha Palmer [co-owner with husband Potter Palmer of the Palmer House hotel], the brownie was created in the Palmer House kitchen to be served at the World's Columbian Exposition in 1893. The recipe below is well over a century old and is the same one used for the brownie served in the Palmer House Hilton today. The dessert remains one of the hotel’s most popular confections."

Mix the sugar and flour together in a bowl. Combine chocolate and flour mixtures.

Pour mixture onto a 9-inch by 12-inch baking sheet. Sprinkle walnuts on top, pressing down slightly into the mixture with your hand.

Bake 30–40 minutes. Brownies are done when the edges begin to crisp and the whole has risen about a quarter of an inch. The middle should remain gooey.

To make the glaze:

Mix together 1 cup of water, 1 cup of apricot preserves, and 1 tsp. of unflavored gelatin in sauce pan. Bring to a boil for 2 minutes. Brush hot glaze on brownies while still warm. 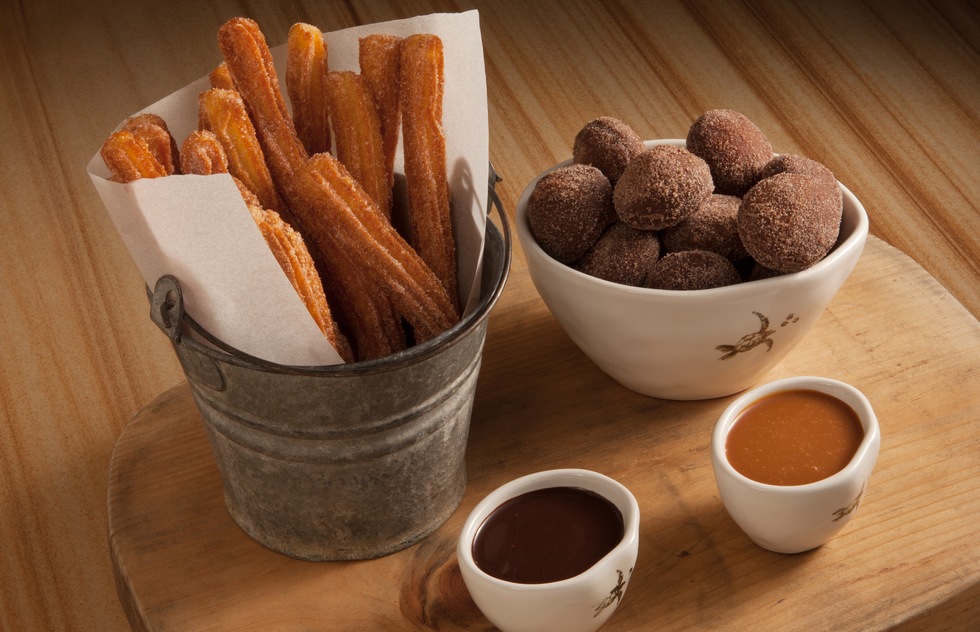 Add butter, salt, and sugar to 4.5 cups of water and bring to a boil. Add the flour and cook for 3 minutes over high heat.

Pour the resulting mixture into a bowl. Using an electric mixer with the paddle attachment at medium speed, add the eggs one by one.

Once combined, pour the mixture into a pastry bag fitted with a star tip. [If you don't have a pastry bag, here's how to make your own from a zipper-lock freezer bag.]

In a large frying pan over medium heat, add enough oil to come halfway up the sides. Holding the piping bag a few inches above the oil, carefully pipe churros into 6-inch-long ropes. Use kitchen scissors to cut off dough from piping bag.

Fry until golden, 4 to 5 minutes, turning as necessary. Remove churros with a slotted spoon or tongs and immediately roll churros in cinnamon sugar, then set aside to cool before eating.

[Sorry, but the chocolate donuts pictured next to the churros above are not included in this recipe.] 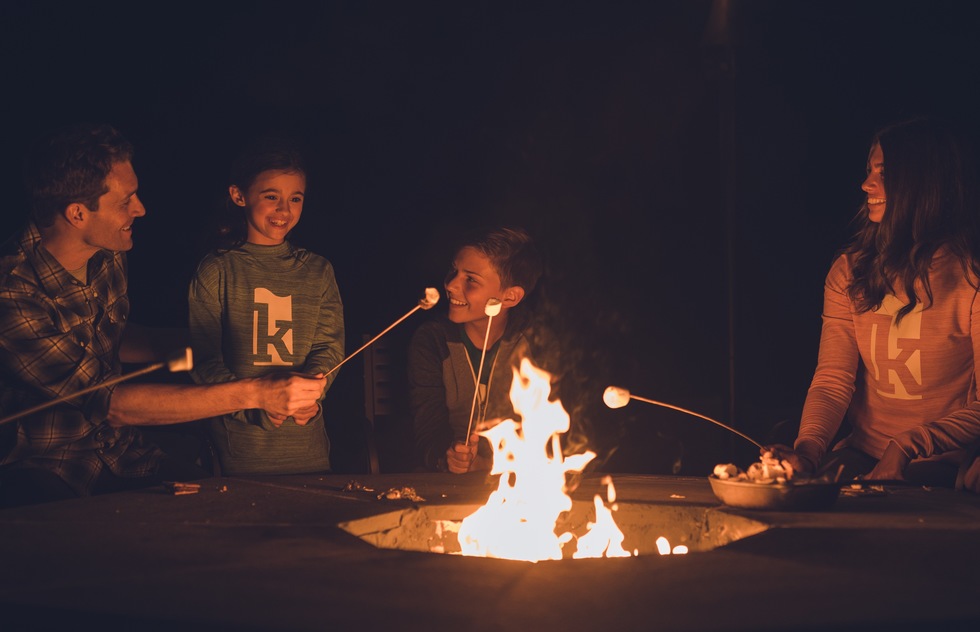 Hotel's description: "The Kartrite knows a thing or two about the art of making a perfect s’more—in 2019, the resort successfully made the world’s largest. Every night the Kartrite's outdoor fire (pictured) invites families to cozy up in the brisk air of the Catskill Mountains and roast marshmallows. The at-home version of the ooey-gooey dessert takes just three ingredients and a few simple steps."

On a baking sheet, use chocolate, marshmallows, and half of graham crackers to assemble open-faced s'mores.

Place baking sheet under the broiler for a few seconds until achieving the desired level of toasting. 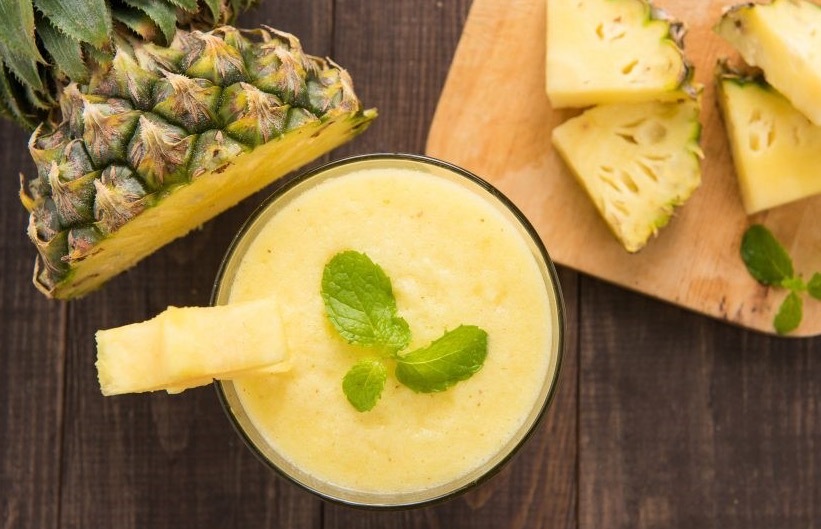 Hotel's description: "Full of flavors representative of a tropical atmosphere, this easy-to-replicate-at-home dessert from the hidden gem found along the only private beach on the island of Bonaire will be sure to virtually transport people to a beach chair set on white sand alongside warm ocean breezes."

Puree the cream of coconut, crushed pineapple, whipping cream, and rum in a food processor or blender. Transfer to a bowl.

Pour 2 tbsp. of water into a small saucepan. Sprinkle with the gelatin. Let stand 1 minute.

Divide among 4–6 wineglasses, ramekins, or any other small bowls. Cover and let chill overnight.

To serve, sprinkle mousse with freshly grated nutmeg and place a couple whole strawberries on the side. 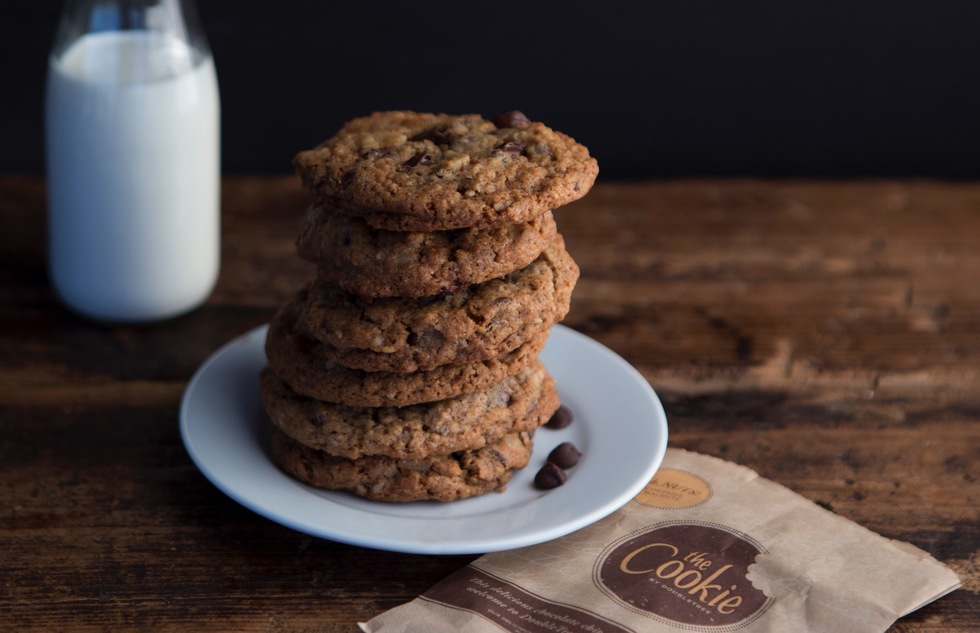 Hotel brand's description: "The warm chocolate chip cookie welcome is synonymous with DoubleTree hotels worldwide. DoubleTree cookies have a passionate fan following and a long history. More than 30 million are consumed every year, and the DoubleTree chocolate chip cookie even became the first food to be baked in orbit during experiments aboard the International Space Station." In April 2020, Hilton released the official recipe for the first time.

Cream butter, sugar, and brown sugar in the bowl of a stand mixer on medium speed for about 2 minutes. (Substitute a hand mixer if necessary.)

Remove bowl from mixer and stir in chocolate chips and walnuts. Portion dough with a scoop (about 3 tbsp. each) onto a baking sheet lined with parchment paper. Space each cookie about 2 inches apart.

Preheat oven to 300° F. Bake for 20–23 minutes, or until edges are golden brown and center is still soft.

Remove from oven and cool on baking sheet for about an hour before eating. Recipe makes 26 cookies. 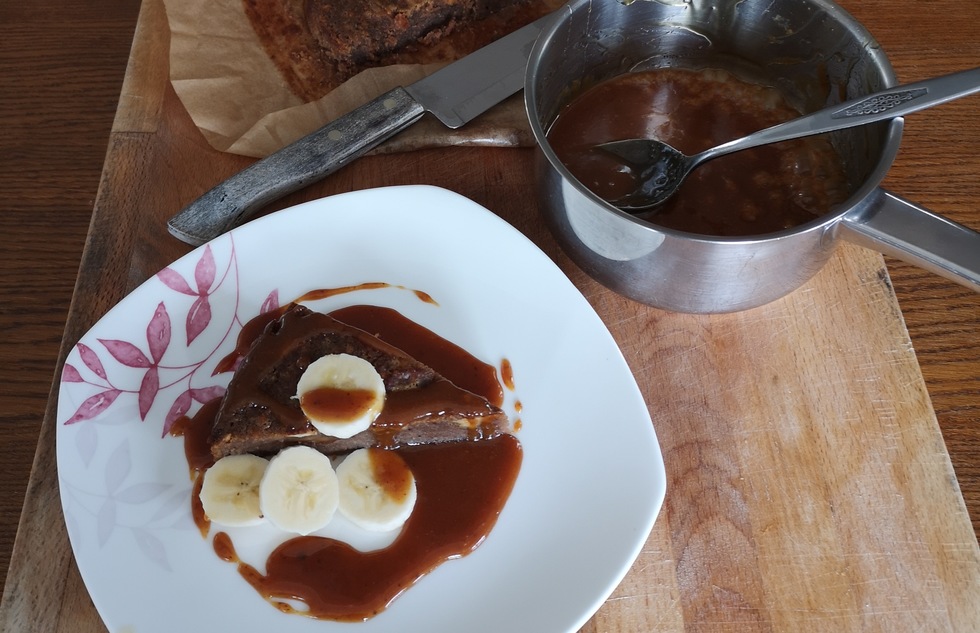 Chef Adam Rawson's description: "This delicious, adaptable sticky toffee oatcake comes out quite like a gooey brownie. It's made using what I'd expect most homes have in the back of the cupboard and the most basic of equipment. Perfect for when you can't leave the house, it's a nice, non-cheffy recipe anyone can make no matter where they are in the world."

3 eggs (this will determine measurements for other ingredients; see instructions below)
Golden syrup (in the U.S.: maple syrup or honey)
Oat flour (can be made by blending oats; potential substitutes: plain flour, coconut flour, or almond flour)
Brown butter (make by boiling butter in a pan until butter turns brown and nutty)
Banana pulp (make by mashing up frozen bananas)
Chopped toasted walnuts (substitute any other kind of nut or dried fruit)
Maldon salt (substitute any other salt crystals)

Crack 3 eggs in a see-through bowl. Mark or make a note of the volume of the eggs when they are in the container—you'll match that level for the rest of the ingredients.

Put the eggs in a mixing bowl or blender. Using the same container you used for the eggs, get equal volumes of the remaining ingredients (flour, syrup, banana pulp, brown butter, and nuts)—minus the salt—and whisk them together with the eggs.

Season generously with salt. Then pour the bowl's contents on a baking tray, and bake for roughly 20–25 minutes in an oven heated to 350° F.

Using equal parts butter and syrup, boil until mixture caramelizes. Add dash of milk and a touch of salt to make the sauce silky. 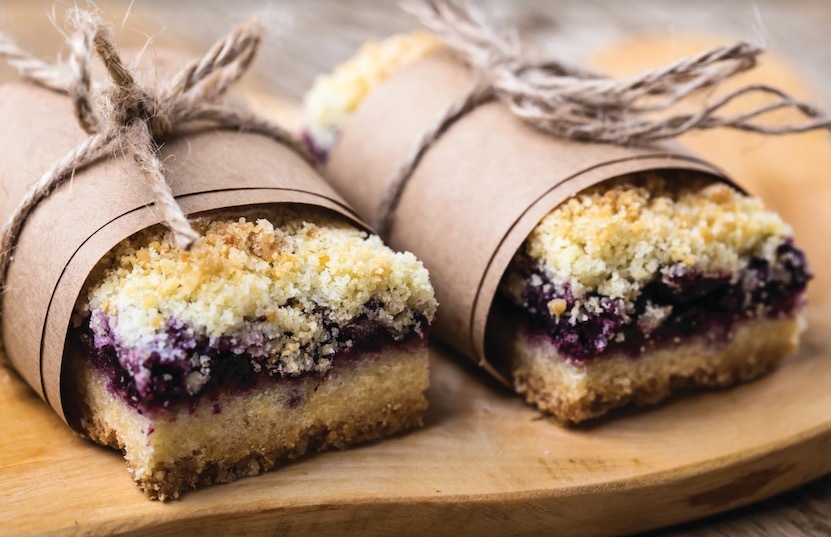 Place crust ingredients into a food processor and blend until a dough forms. Press dough into an 8-inch by 11-inch pan and bake for 20 minutes until golden brown.

Combine berries, sugar, and lemon juice in a saucepan and cook on low for 15 minutes. Whisk arrowroot and 0.5 cup of water in a bowl together and add to the berry mixture on stove.

Continue cooking for 10 more minutes until mixture begins to bubble. Pour the mixture into the cooked crust.

Combine streusel ingredients in a bowl and sprinkle on top of berry bars. Cook for 20 minutes until topping is slightly golden brown. 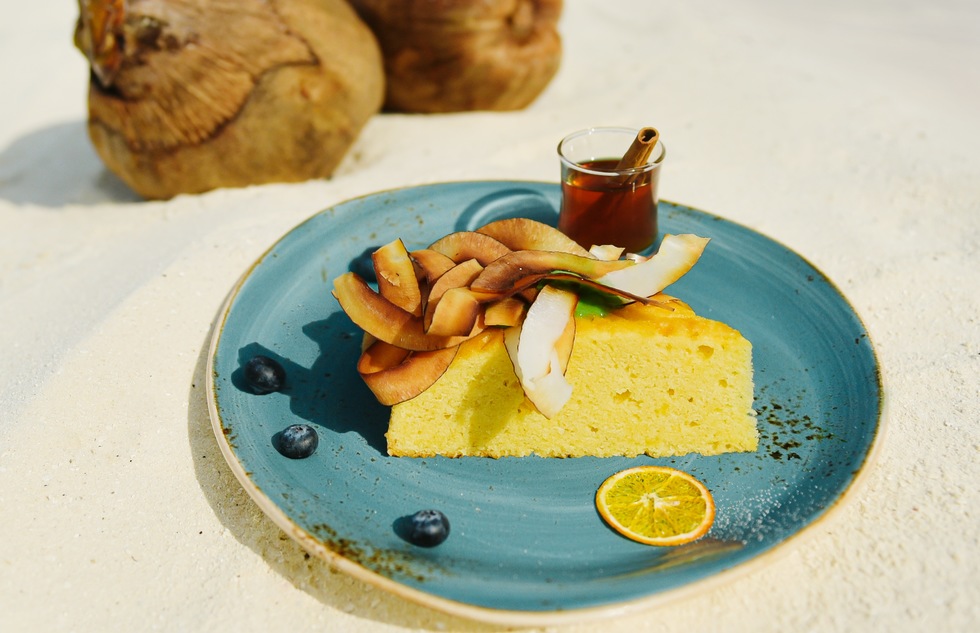 Preheat oven to 350° F. Grease a round cake pan with butter and line with baking paper.

Using an electric mixer, beat the butter and sugar together until pale and fluffy. Add vanilla essence and each egg one at a time, mixing each time.

With the mixer on a low speed, add the dry ingredients to the batter. Turn mixer up to medium speed until ingredients combined.

Pour the batter into prepared cake pan and spread evenly. Bake for 45 minutes, or until golden brown on top and cooked all the way through. 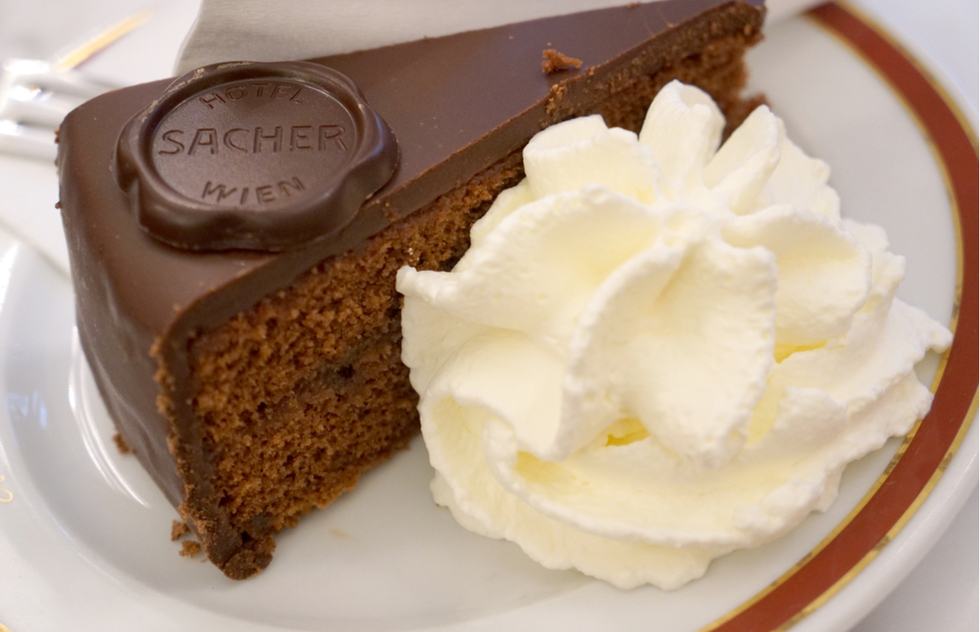 Hotel's description: "One day in 1832 the court of Prince Metternich wanted a dessert to be created for discerning guests. It just so happened that the chef de cuisine was ill at the time and apprentice Franz Sacher filled in for him. The young man created a wonderful cake that left nothing to be desired. This night marked the birth of the Original Sacher-Torte. Within a matter of years, the Original Sacher-Torte had gained international popularity. Franz Sacher's son Eduard opened the famous Hotel Sacher Wien, purveyor to the Imperial and Royal Household. The recipe has been passed down from generation to generation and kept securely locked away in a safe. This is only an approximation of the original recipe."

Preheat oven to 170° C (340° F). Line the base of a springform pan (substitute round cake pan if necessary) with baking paper, grease the sides, and dust with a little flour.

Slit vanilla pod lengthwise and scrape out seeds. Using a hand mixer with whisks, beat the softened butter with the icing sugar and vanilla seeds until bubbles appear.

Separate the eggs. Whisk the egg yolks into the butter mixture one by one.

Gradually add melted couverture chocolate. Beat the egg whites with the castor sugar until stiff, then place on top of the butter and chocolate mixture.

Sift the flour over the mixture, then fold in the flour and beaten egg whites.

Transfer the mixture to the cake pan, smooth the top, and bake in the oven (middle rack) for 10–15 minutes, leaving the oven door a finger's width ajar. Then close the oven and bake for approximately 50 minutes. The cake is done when it yields slightly to the touch.

Remove the cake from the oven and loosen on the sides of the pan. Carefully tip the cake onto a cake rack lined with baking paper and let cool for approximately 20 minutes. Then pull off the baking paper, turn the cake over, and leave on rack to cool completely.

Put 200g (1 cup) castor sugar in a saucepan with 125mL (4.25 oz.) of water and boil over high heat for approximately 5 minutes. Take the sugar syrup off the stove and leave to cool a little. Coarsely chop 150g (0.75 cup) couverture chocolate, gradually adding it to the syrup, and stir until it forms a thick liquid.

Keep trying until cake is fit for Austrian royalty.