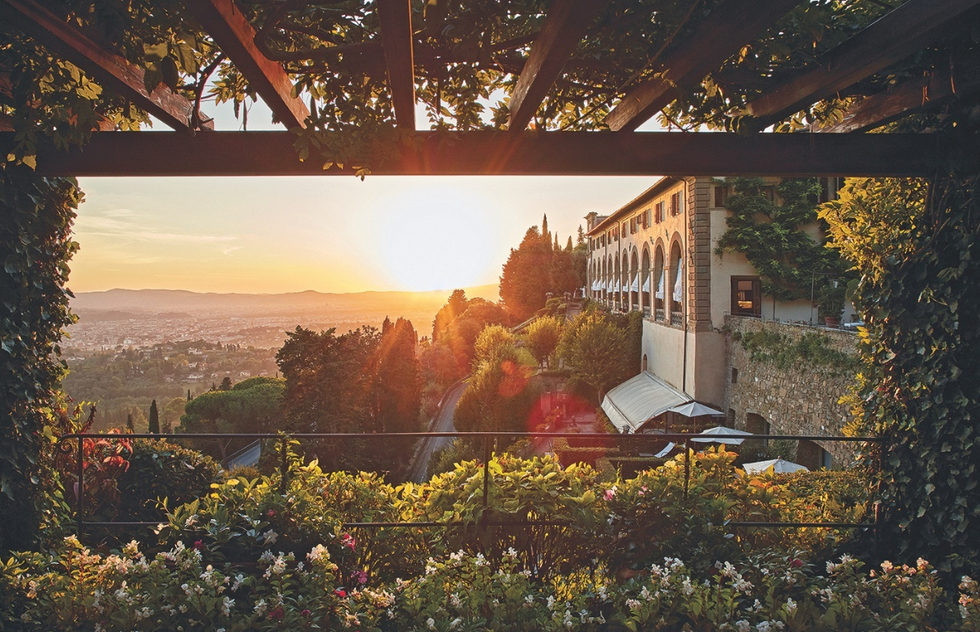 Italy's Tuscany region is a beautiful place that has been an incubator for beautiful things, including some of the world's most well-known works of art, literature, architecture, and fashion.

Describing the setting for all that cultural output in a new photo book called Tuscany Marvel from luxury publisher Assouline, journalist and academic Cesare Cunaccia writes, "The Tuscan landscape consists of vineyards, olive trees and crops on the slopes of hills, crisscrossed by dirt roads and watched over by ranks of cypresses resembling notes on a line of music." And don't forget the pine-topped mountains or the verdant valley carved by the Arno river or the beaches running alongside the Tyrrhenian Sea.

Sure, we know Medici patronage played a big role in making the Tuscan city of Florence the capital of the Italian Renaissance, but when you gaze on the surrounding scenery, you're inclined to think, How could artists not be inspired here? Just look at the place.

In over 200 lavish illustrations, Tuscany Marvel celebrates the region's unique alchemy of natural, agricultural, and artistic riches, juxtaposing the masterpieces of Michelangelo, Botticelli, and Brunelleschi with the winemaking traditions of Chianti, sublime views of sunsets over rolling hills, and modern scenes incorporating the styles of homegrown icons such as Gucci and Ferragamo.

The volume demonstrates once again why Tuscany has ranked among Europe's top objects of wanderlust for generations.

Scroll on to see some of our favorite images from the book.

Pictured above: Villa San Michele, A Belmond Hotel in Florence 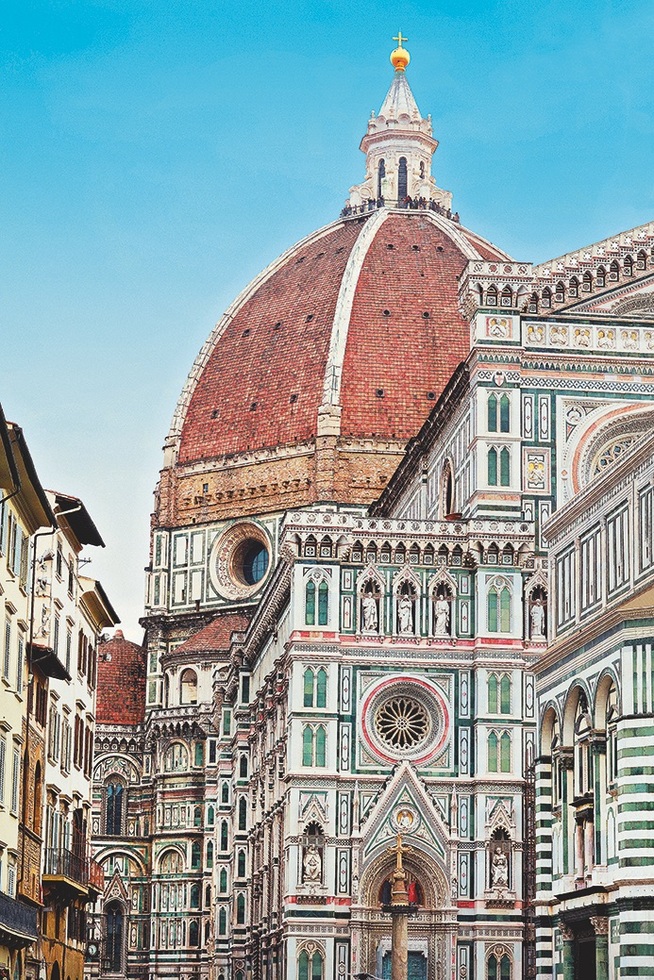 The enormous dome of Florence's Gothic cathedral (officially the Cattedrale di Santa Maria del Fiore) was conceived at the end of the 13th century, but the showstopper of a topper wasn't realized until the middle of the 15th, when Filippo Brunelleschi puzzled out how to engineer what remains the largest brick dome ever constructed. 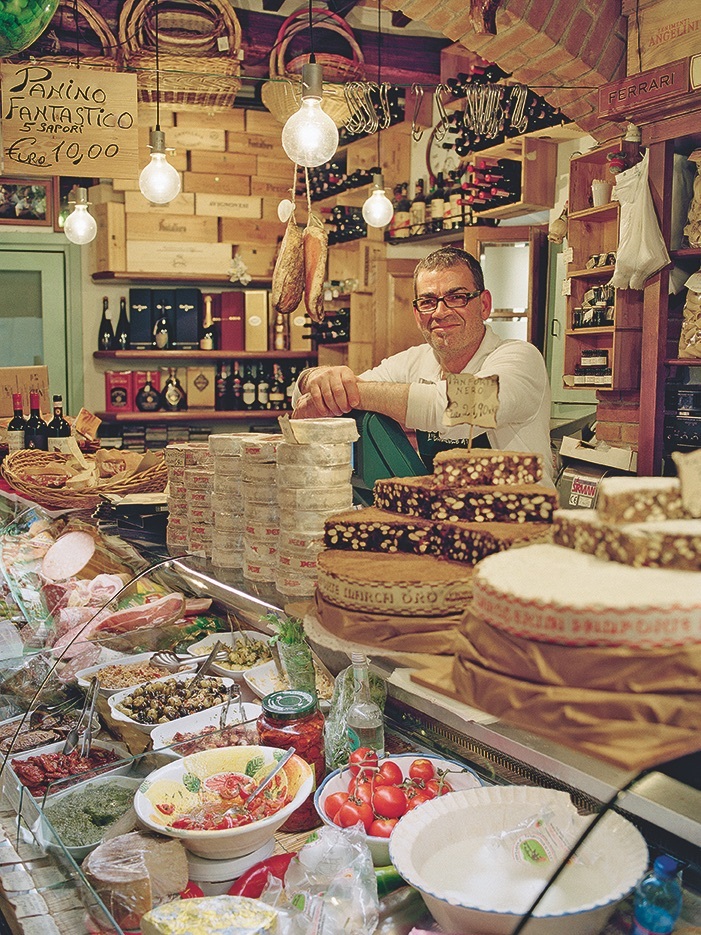 © Gary Yeowell/Getty Images
Local Grocery Store, Siena
For a snack to complement Tuscany's famous wines, Cunaccia recommends locally made pecorino cheese and a slice of la fettunta—toasted bread rubbed with garlic, seasoned with a little salt, and drizzled with the obligatory extra-virgin olive oil. "The best oil is fiercely contested in every corner of the region," he writes. 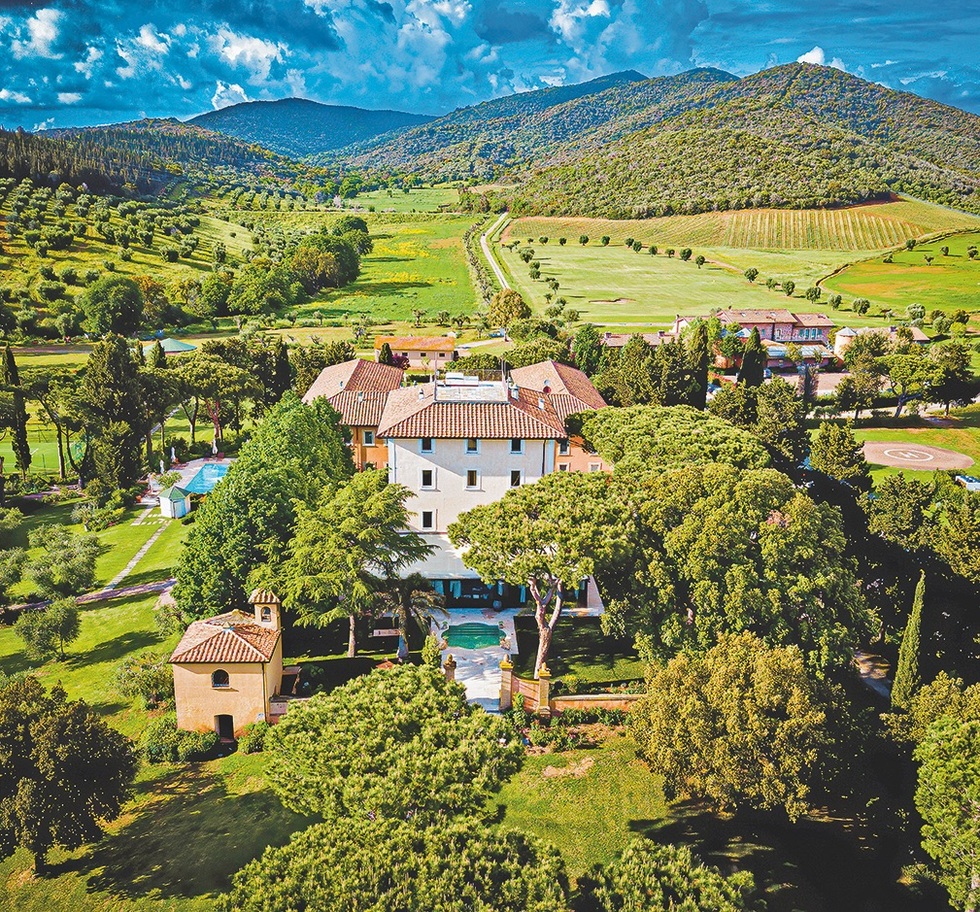 Set amid more than 1,000 acres of rolling hills dotted with olive trees and lined with vineyards, L'Andana resort occupies a 19th-century estate in the Maremma, a coastal stretch next to the Tyrrhenian Sea. Nearby attractions include quiet beaches, wetlands inhabited by flamingos, and the medieval fishing village of Castiglione della Pescaia. 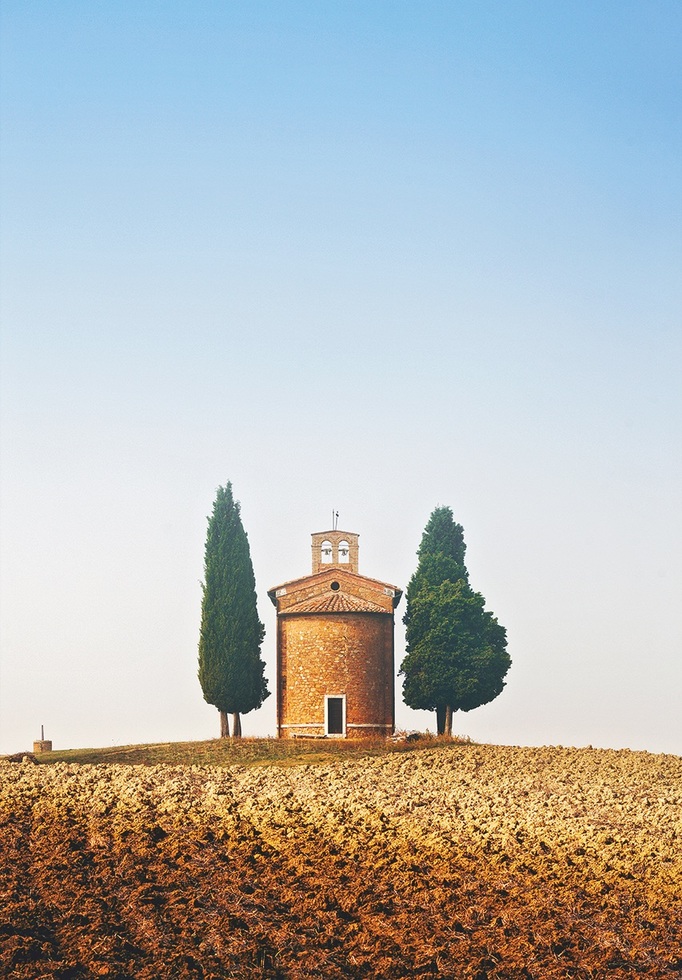 This tiny, perfect chapel flanked by symmetrical rows of cypress trees (a prime example of the Accidentally Wes Anderson phenomenon) is located off a dirt road midway between the towns of San Quirico d’Orcia and Pienza. Legend has it that the Renaissance-era structure stands on the spot where the Virgin Mary once appeared to a shepherdess. 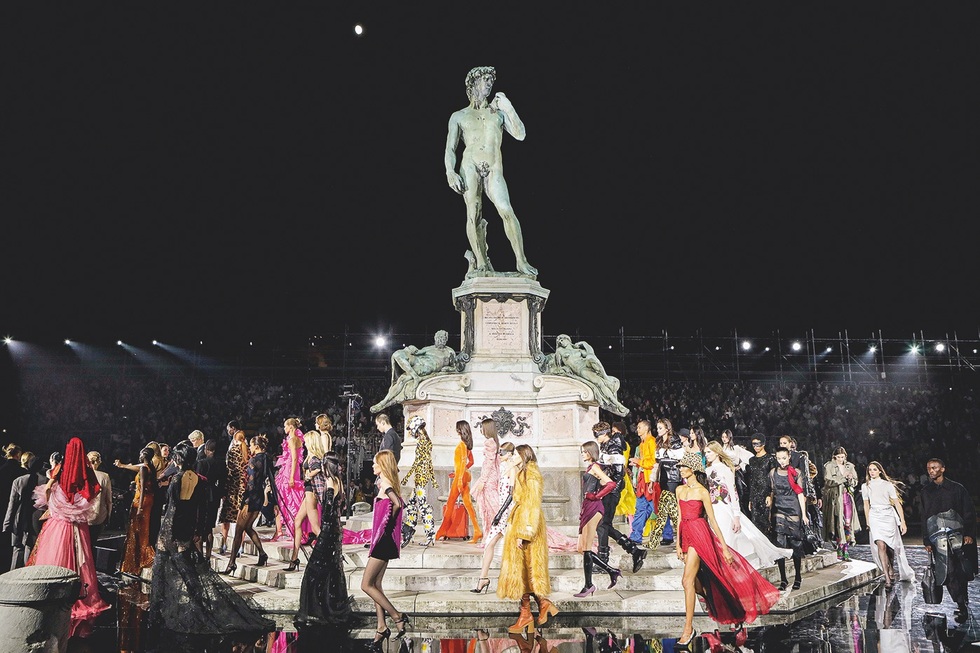 Though Tuscany might conjure rustic images, the region's commitment to top-notch craftsmanship has made Florence the headquarters of several ultra-sophisticated fashion brands, including Gucci, Emilio Pucci, and Salvatore Ferragamo. Above, models walk the runway in a 2019 show marking the 90th anniversary of local luxury retailer Luisa Via Roma. The stage set is Florence's Piazzale Michelangelo (that's only a replica of the David statue—the real thing resides at the city's Galleria dell’Accademia). 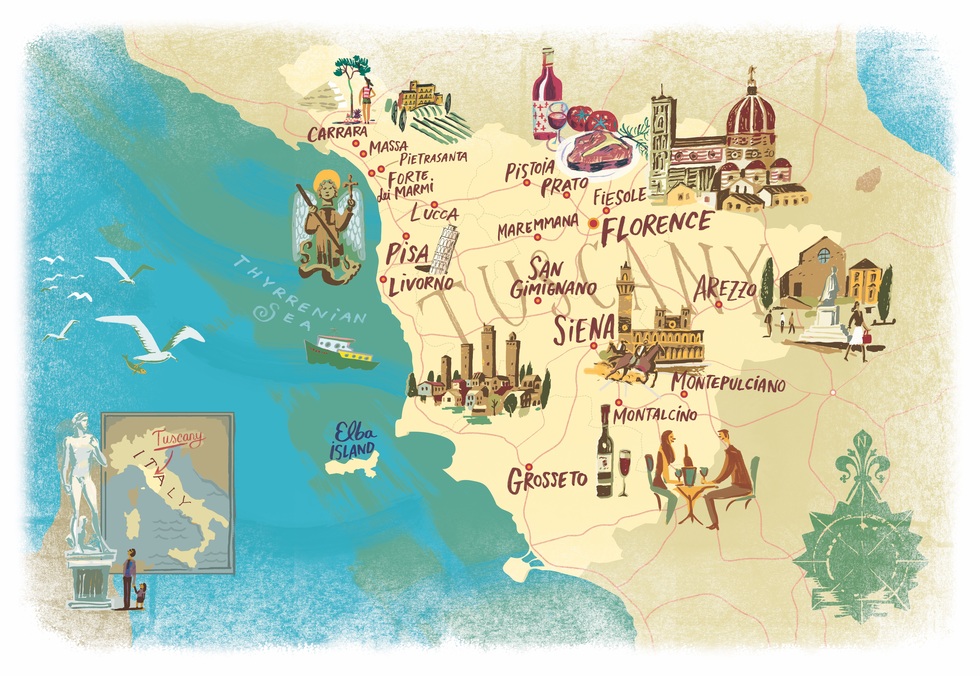 In his introduction, Cunaccia argues that Tuscany is best thought of as "various worlds connected within a special galaxy." It's made up of 10 different provinces—Arezzo, Florence, Grosseto, Livorno, Lucca, Massa-Carrara, Pisa, Pistoia, Prato, and Siena—"each offering a distinct experience of Italy." 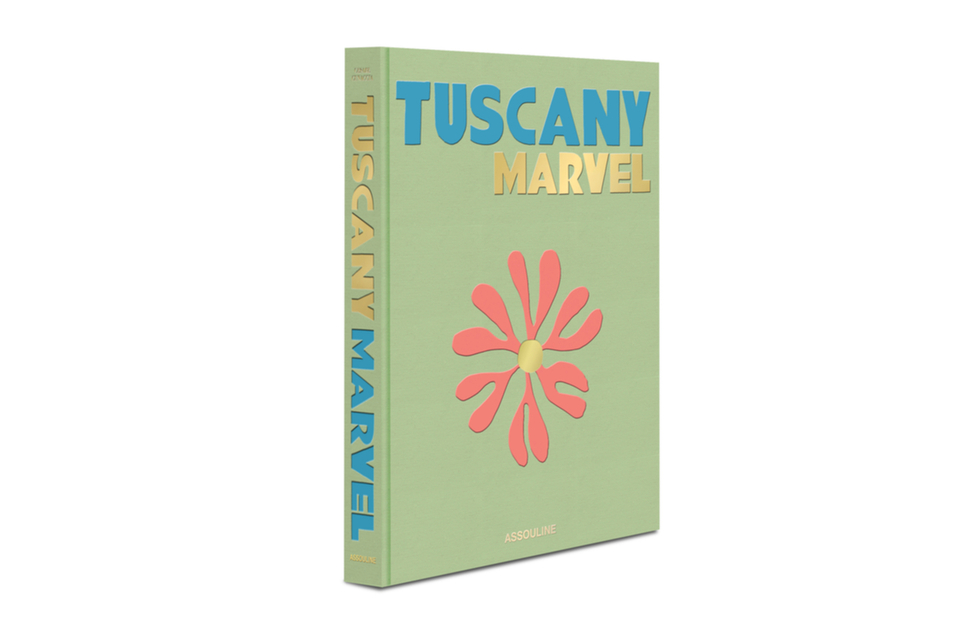 Tuscany Marvel by Cesare Cunaccia is available now for $95 at Assouline.com.