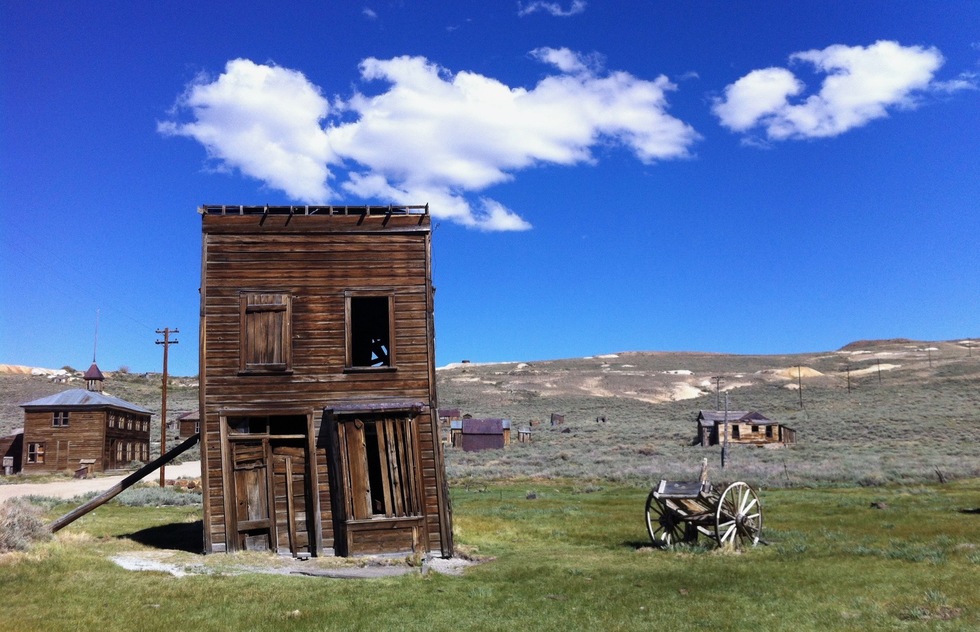 The goldmine runs out of gold, the train begins bypassing the depot, and townsfolk decide living on top of a desolate mountain or in the middle of a desolate desert isn’t worth the trouble.

Travelers who encounter the remnants of these failed experiments are left with the eerie mystery of it all, or, in those ghost towns reborn as kitschy tourist attractions, invited to revel in the can-do spirit of American commerce that brought settlers west in the first place (when life gives you a ghost town, by all means organize a ghost tour).

Here are nine unpeopled municipalities worth a stop during your next road trip through the American West. 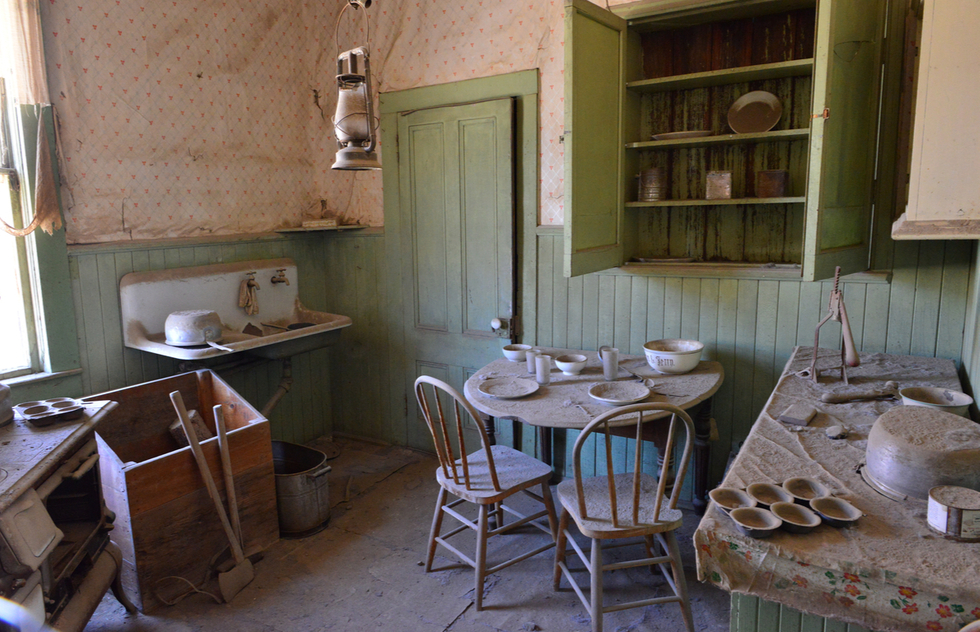 You’d be forgiven for assuming the residents of Bodie, California, located high in the Sierra Nevada range northeast of Yosemite National Park, were beamed up en masse in an alien abduction. Peer into the windows of the 100 or so remaining structures—homes, hotels, a general store, a church, a supremely creepy funeral parlor—in this former gold-mining town, and you’ll see scenes suggesting everybody simply up and vanished. Under more than a century’s worth of dust, shelves remain stocked with goods, tables are still set for dinner, and poker chips await getting cashed in next to a roulette wheel.

What actually happened? Bodie’s 8,375-foot-high setting is so remote (it’s accessible only by a 3-mile dirt road in summer and buried under several feet of snow in winter) that citizens opted to leave their stuff behind when pulling up stakes rather than carting their belongings to new digs.

Following an 1870s heyday, mining prospects dried up in the early years of the 20th century, but California’s state parks system has preserved this 500-acre time capsule in a state of “arrested decay,” as the official website poetically puts it. Ghosts are said to haunt the spot, and a curse supposedly befalls any tourist who dares to take home an artifact. 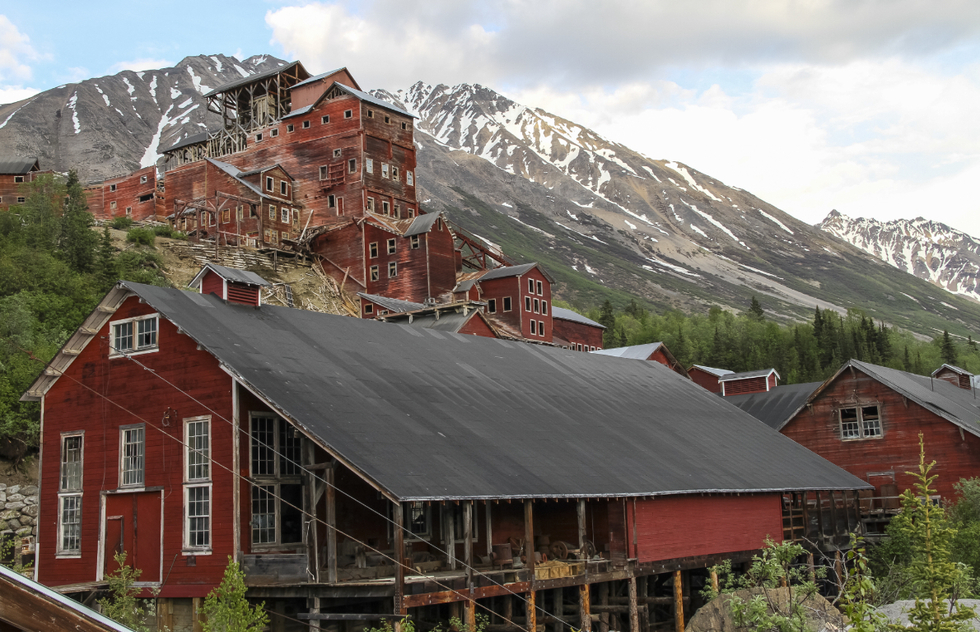 Huge deposits of copper proved lucrative enough for mining tycoons to finance an operation in the middle of what is now Alaska’s vast Wrangell-St. Elias National Park & Preserve—at more than 13.2 million acres, the largest U.S. national park by quite a stretch (you could fit Yellowstone and Yosemite inside, with room left over for all of Switzerland).

Starting around the beginning of the 20th century until mineral resources were depleted in 1938, up to 600 miners lived and worked in Kennecott’s 76 buildings, the most striking of which is the 14-story timber-frame red mill, set against a dramatic mountain backdrop. Though the work was grueling, Kennecott’s tight-knit community had a few leisure amenities, including an ice skating rink and a recreation hall that hosted movies and dances.

Reaching the abandoned town today requires a drive along a 59-mile gravel road. You can wander the streets of Kennecott on your own or take a history walk led by a park ranger based at the Kennecott Visitor Center. The only way to go inside the mill is by booking a two-hour tour from St. Elias Alpine Guides, a private operator. 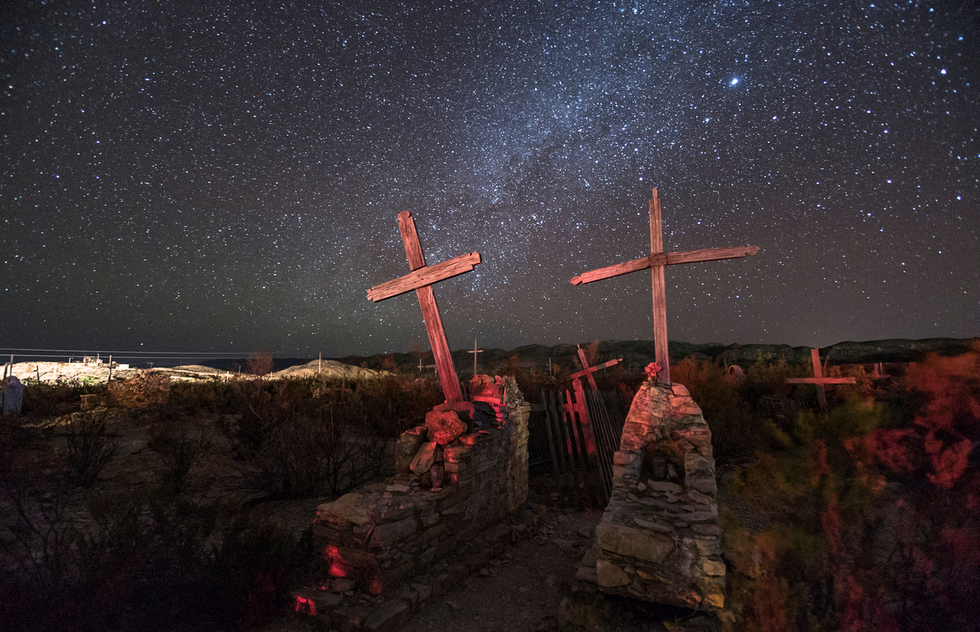 For a ghost town, Terlingua in southwest Texas has an awful lot going on. The quicksilver mining company that put the town on the map went bankrupt in the 1940s, but the offbeat, tourism-centered offerings that have moved in since then make this a fun base for exploring the nearby Rio Grande and Big Bend National Park.

After checking out the crumbling remains of stone houses and the one-acre cemetery with its wooden crosses and rocky grottos, you can shop for souvenirs at the Terlingua Trading Company or enjoy dinner, drinks, and live music at the Starlight Theatre, housed in a former movie palace. For an overnight stay, camp out under the star-studded desert sky or bed down in unconventional lodgings such as a Native tent, an Airstream trailer, or a futuristic see-through “Bubble.” Show up during the first weekend in November and you’ll find Terlingua filled with revelers for a chili cook-off that’s been going since 1967. 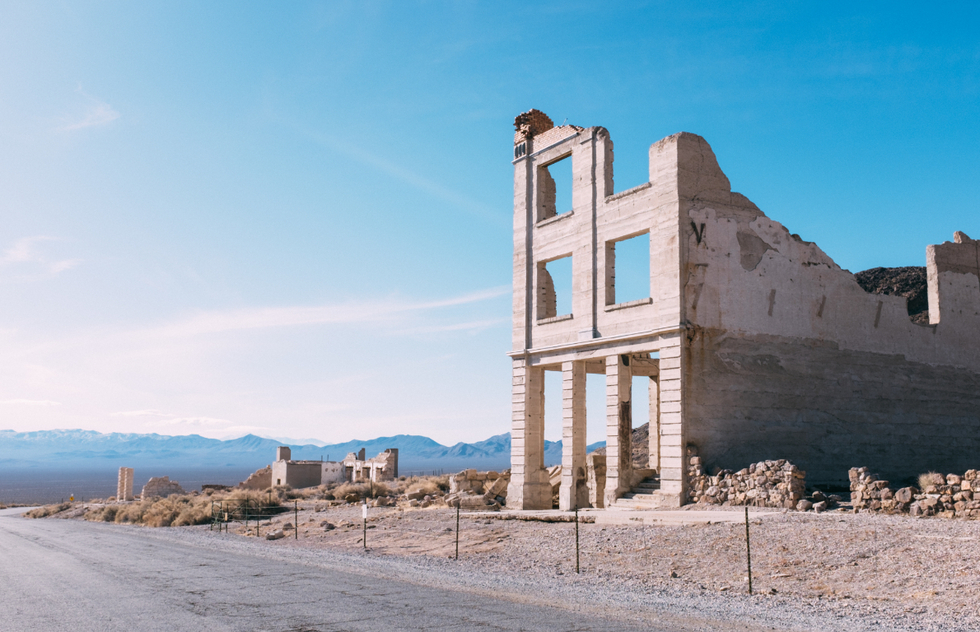 The boom-to-bust lifespan was extremely brief for this town in the Bullfrog Hills 120 miles north of Las Vegas and minutes from the eastern entrance to Death Valley National Park.

The discovery of gold prompted a substantial investment in 1906 from steel magnate Charles M. Schwab (no relation to the financial services guy), who brought a train station, school, opera house, and stock exchange to town, along with state-of-the-art infrastructure for indoor plumbing and electricity. By 1920, a series of financial crises had pulled the plug on Rhyolite’s future (literally—the power company turned off the lights) and the place was abandoned.

The town’s photogenic ruins include parts of a three-story bank, the jail, and Tom Kelly’s Bottle House, made from thousands of beer and whiskey bottles. Moviemakers restored the structure for the partially lost 1925 silent film The Air Mail. On the southern end of town, the Goldwell Open Air Museum features seven colossal outdoor sculptures created by a group of Belgian artists. 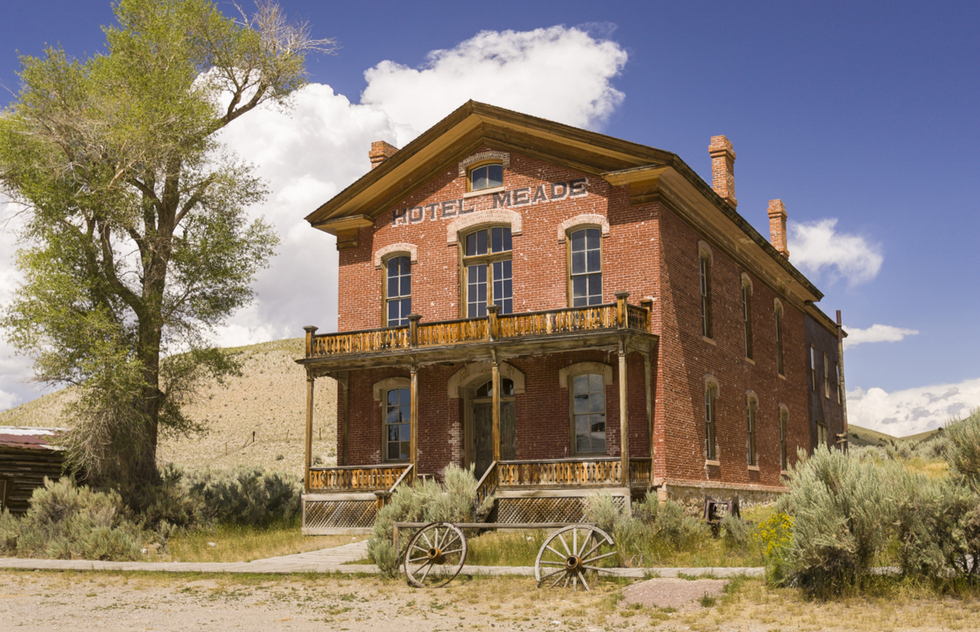 An 1862 gold discovery at nearby Grasshopper Creek ushered in the glory days for Bannack in southwestern Montana. For a brief spell, the town even served as the then-territory’s first capital, before gold seekers chased the next rush to Virginia City and took the seat of government with them.

At the peak of Bannack’s boom, crooked sheriff Henry Plummer was hanged by vigilantes for allegedly leading a gang of bandits called The Innocents, who were anything but. Nowadays, Plummer, his associates, and their victims are said to supply the ghost town’s ghostliness, haunting the abandoned but well-preserved Hotel Meade, jail, schoolhouse, and about 60 more brick and wooden buildings you can inspect on your own or via a guided tour from state park rangers. During Bannack Days in July, the streets serve as setting for gunfight reenactments, horse-drawn wagon rides, and other forms of Wild West fun. 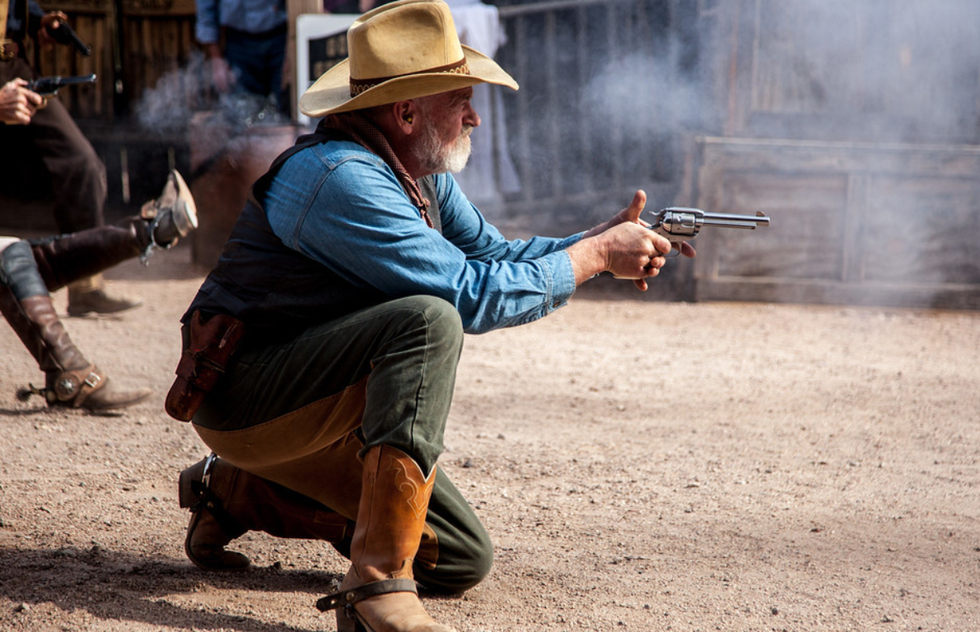 Established in 1893 for reasons advertised right there in its name, Goldfield was abandoned not just once but two times—first after the mines went bust in 1897, then again after a second go in the early 1900s failed to pick up steam.

Apart from some building foundations and a few mining artifacts, what now stands on Goldfield’s site in the shadow of the excellently named Superstition Mountains east of Phoenix is almost entirely a re-creation for tourists. But if, like us, you have a soft spot for roadside attractions with more quirks than historical accuracy, you’ll find it hard to resist a chance to mosey along Main Street’s wooden boardwalks.

You’ll have to pay separate fees to ride the narrow-gauge railroad, get a buzzard’s-eye view on the zip line, see the inevitable reptile museum, or take the bordello tour guided by costumed floozies (their word, not ours). Fortunately, there’s no charge for watching the hourly outdoor showdown among gunslingers firing toy pistols at each other. 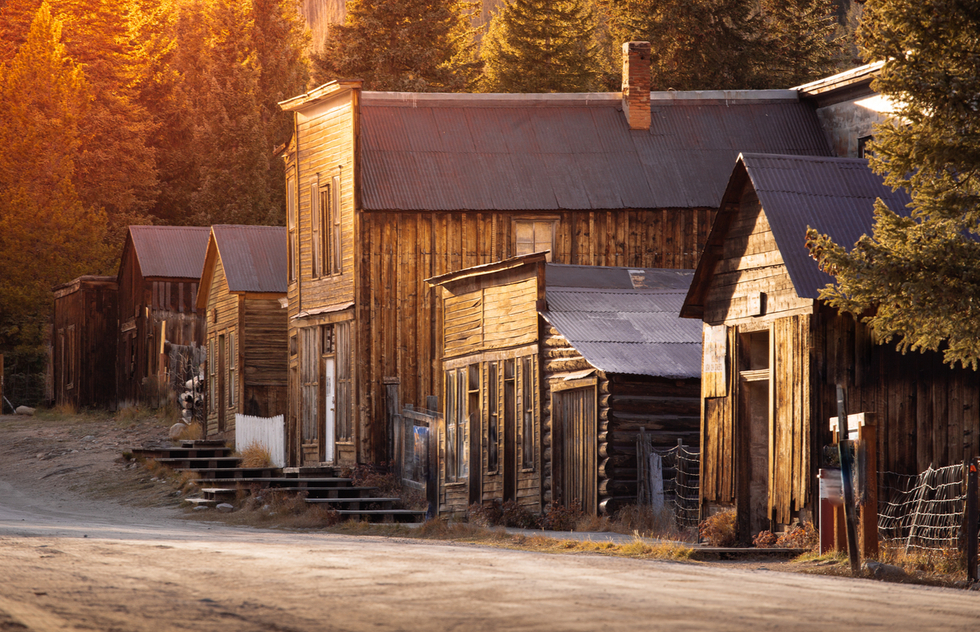 Railroad stops conjured plenty of towns out of America’s western wilderness, and a halt in train service could easily send those places back into oblivion. That’s what happened to the mining outpost of St. Elmo, situated in what is now Gunnison National Forest west of Colorado Springs (the mountain resorts of Aspen, Breckenridge, and Keystone are to the north).

Once home to around 2,000 people when the gold-and-silver mining industry was thriving in the 1880s and ‘90s, St. Elmo went into decline shortly thereafter. In 1922, the railroad stopped stopping—legend has it that the few residents left took the last train out. Some preserved wooden storefronts remain, including the general store, which still sells antiques and such during the summer. Local outfitters rent ATVs for zooming along the old mining roads. 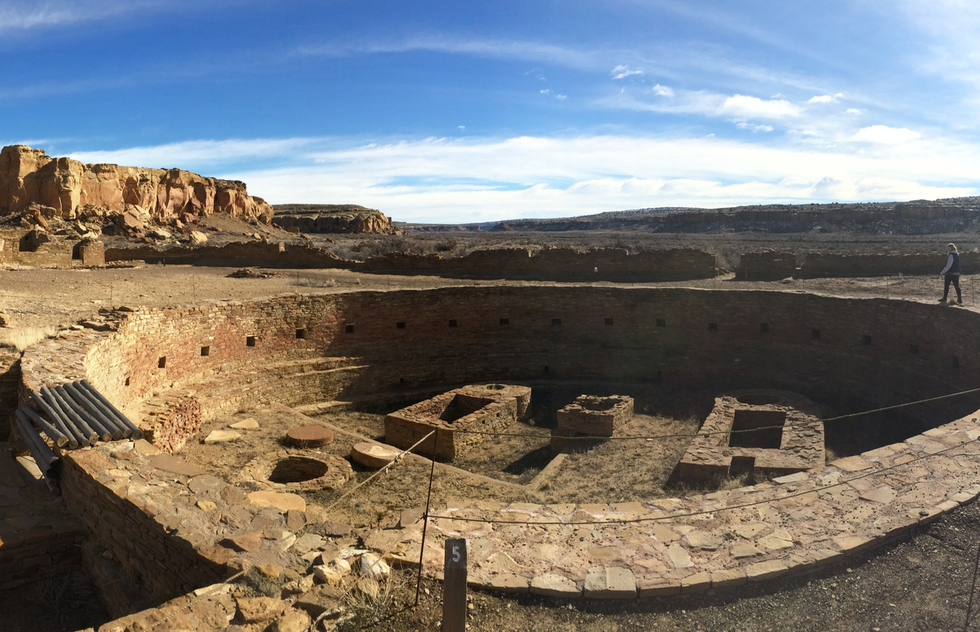 Of course, white settlers were not the first people to inhabit the West—or the first to move on from established villages. By far the oldest location on this list, Chaco Culture National Historical Park in the high-desert landscape of northwestern New Mexico was a major ceremonial, civic, and economic center of ancestral Puebloan culture for about 300 years starting in 800 A.D., before the hubs of Puebloan life shifted north, south, and west.

Chacoans used stone and earth to create massive, multistory dwellings, public buildings, and round ceremonial chambers. Equally impressive are the city’s feats of engineering such as the elaborate network of roads connecting other villages to Chaco. For modern visitors, a paved drive loops through the site; stop to walk among the ruins or hit hiking paths such as the Pueblo Alto Trail, which leads to the canyon rim so you can see the abandoned city from above. Stick around after nightfall for some dazzling stargazing in a certified International Dark Sky Park. 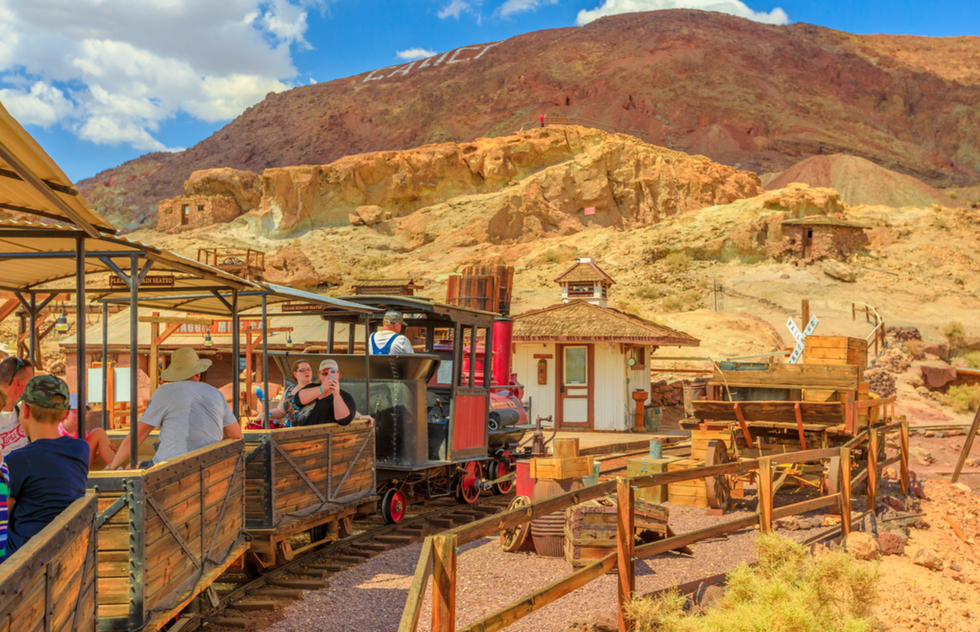 It’s not unfair to say Southern California’s Calico is more amusement park than authentic ruins. After all, the place was bought and restored in the 1950s by Walter Knott of Knott’s Berry Farm fame. But there really was a boomtown on this spot in San Bernadino County, off the I-15 Highway between Los Angeles and Las Vegas, during the region’s silver rush in the 1880s and ‘90s.

Only a handful of structures you’ll see during a visit date from that time—the saloon, general store, and courthouse (now a historical museum) among them. The rest are weathered phonies intended to give tourists a Western-ish experience. You can ride a narrow-gauge railroad through town, tour a mine, and shop for trinkets.

Sure, Calico isn’t as untouched and uncommercial as the aforementioned Bodie in the state’s north. But, on the other hand, Bodie doesn’t have a slanted “Mystery Shack” where the water runs uphill, so score one for Calico.