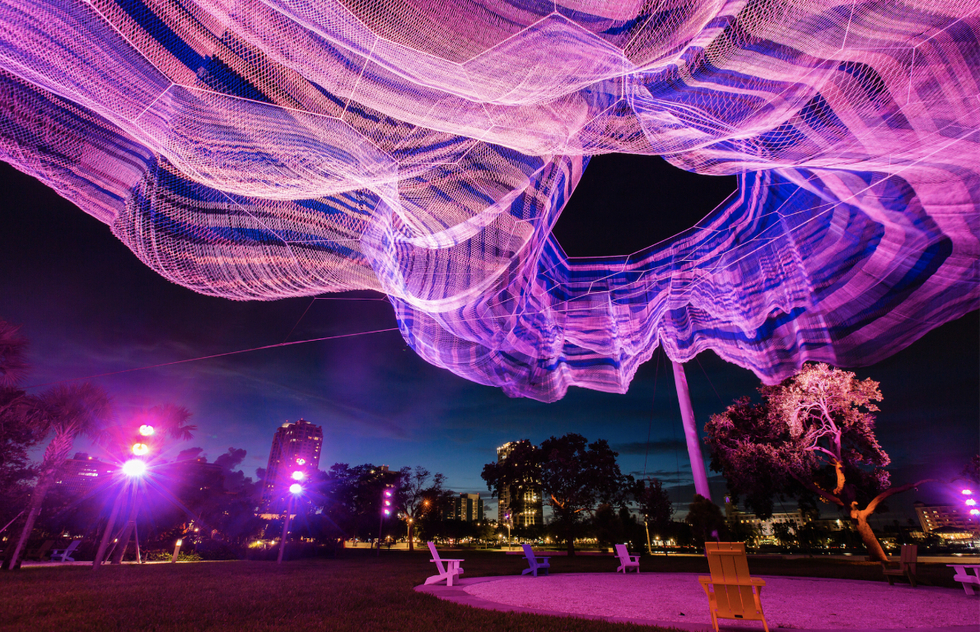 What to Do in St. Pete, the Florida City That Defies Florida Stereotypes

One of the joys of travel—and one of its imperatives, if you ask us—is finding exceptions to stereotypes. And when it comes to Florida, the Gulf Coast city of St. Petersburg is exceptional on several fronts.

The St. Pete spots that follow will broaden your idea of what a Florida vacation entails—plus, they’re pretty fun and illuminating in their own right. Don’t worry: We’ve thrown in a beach and a couple other natural and historical attractions in and around the area to give you a taste of the classic Florida experience, too. 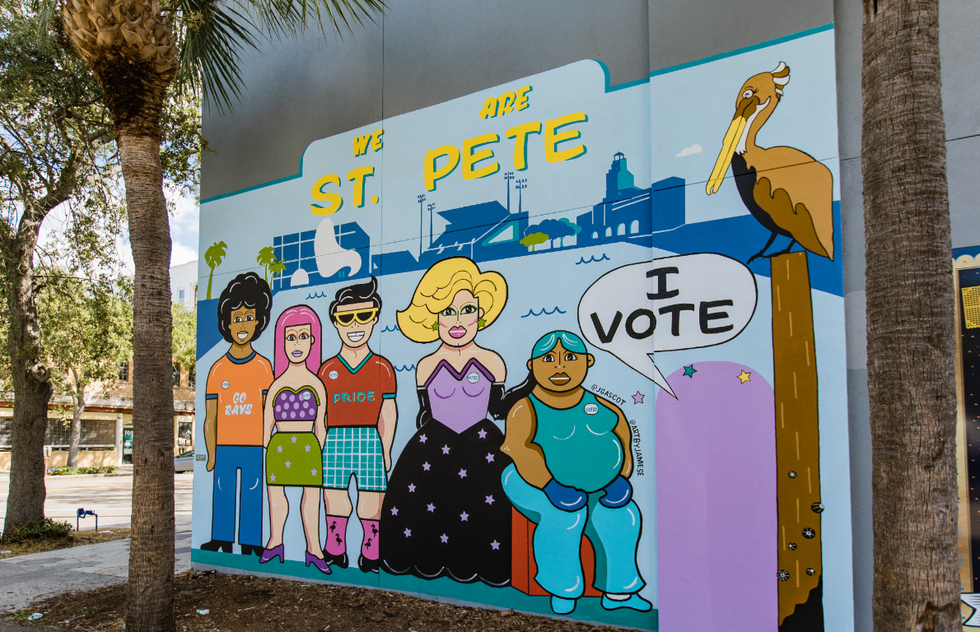 In the first half of the 20th century, St. Pete’s claim to fame in tourism was a bunch of green benches lined up in long rows downtown, where visitors could experience the thrill of . . . sitting in public? This being the Jim Crow era, an unwritten code of racial segregation prevented Black residents from using the seats, a petty cruelty that forever soured nostalgia for the benches after they were removed in the 1960s.

Today, the downtown vibe is less sedate and more truly community-minded along the main thoroughfare, Central Avenue, which stretches westward from the waterfront. A similar atmosphere prevails in the Edge District, a trendy shopping, dining, and entertainment area flanking Central between Dr. Martin Luther King, Jr., and 16th streets.

Pictured above: Diversity in Democracy mural by John Gascot and James Hartzell 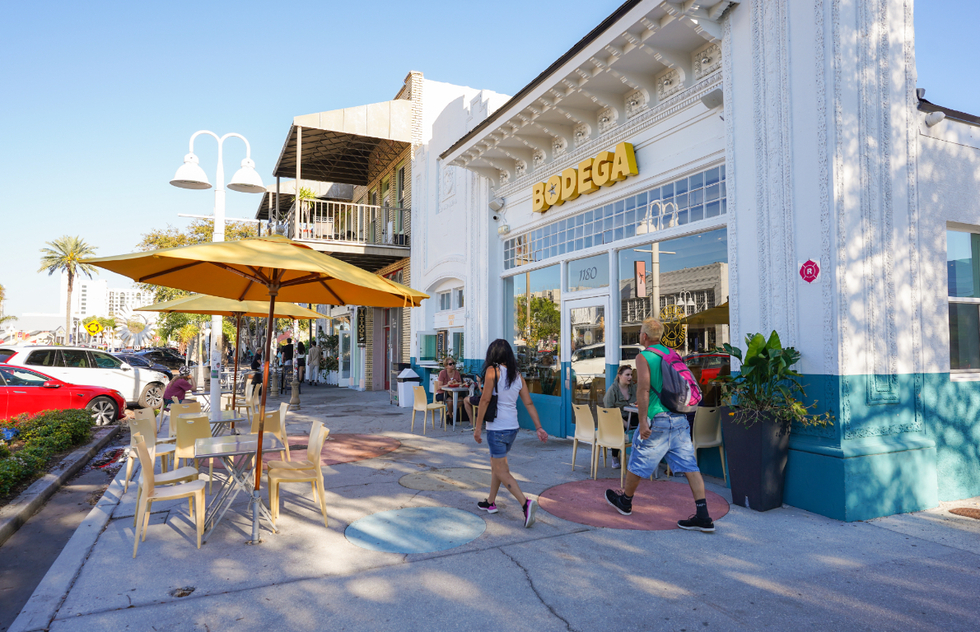 Around lunchtime in the Edge District, try Bodega (1180 Central Ave.), a bright and busy counter service restaurant dispensing Cuban sandwiches and other Latin street food. Downtown options for a satisfying dinner in a stylish setting include Social Roost (150 1st Ave. N), which specializes in upscale fried chicken (though we were partial to a melt-in-your-mouth hen-of-the-woods mushroom dish), and the wildly popular Wild Child (2710 Central Ave.), where you can sip tropical cocktails and sample globe-trotting cuisine (octopus al pastor, snapper a la plancha, pork tonkatsu, mushroom-and-kale paella).

End your night down the street from Wild Child at COCKtail (2355 Central Ave.), a gay bar with a dance floor, live entertainment, and drinks with names about as subtle as the establishment’s. Another intriguing bar we’d like to check out that’s located around the corner in the same building (and has the same owners): The Saint, an intimate, luridly lit speakeasy that leans heavily on its lapsed Catholic theme, with a confessional at the entrance and cocktails named after the seven deadly sins. 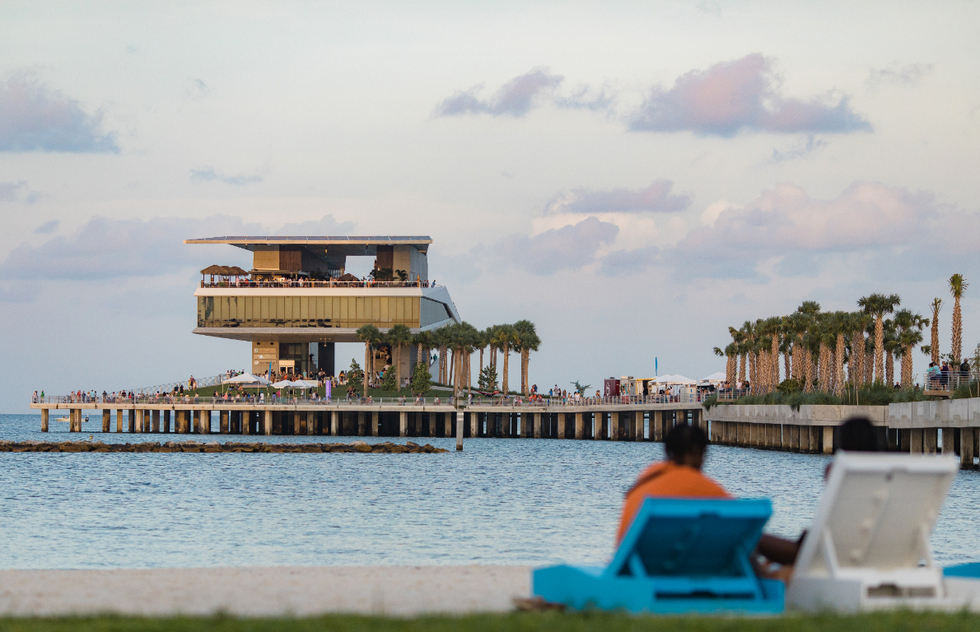 In 2020, St. Pete finally completed a long-in-development replacement for its visually striking, not-quite-structurally-sound Inverted Pyramid Pier, which was demolished in 2015. Extending into Tampa Bay a block east of Beach Drive, the new St. Pete Pier is designed to do a better job of capturing the city’s spirit. To that end, the palm-dotted promenade is lined with public art installations, a handful of dining venues, a marketplace for local vendors, a marine life discovery center, a deck for fishing, a splash pad and playground for kids, and even a little sandy beach.

At the end of the pier, a building that resembles a parking garage houses another restaurant and, on top, Pier Teaki, where you can grab a seat under a thatched roof and look out over the bay toward the Tampa skyline while you sip a mai tai. The place is operated by the same people who own the nearby Birchwood hotel (340 Beach Dr.), known for an elegant rooftop lounge of its own called Canopy. 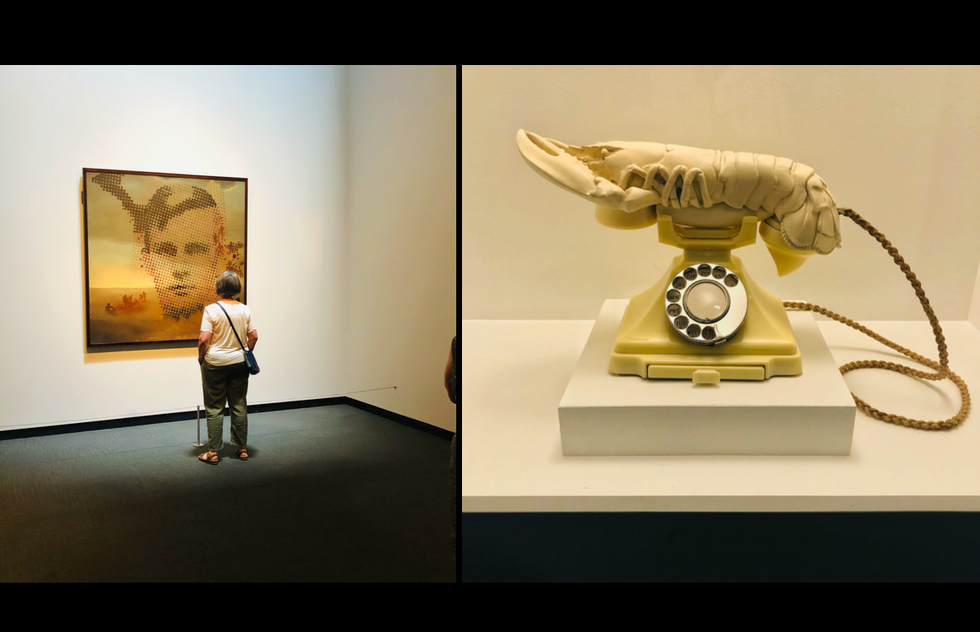 One of the key elements in St. Pete’s reputation as a visual arts hub has to do with an artist who never set foot here: the flamboyantly mustachioed Spanish surrealist Salvador Dalí of melting clock fame. Florida became the home of the largest collection of the artist’s works outside of Spain in 1982, when St. Pete officials persuaded wealthy Ohio collectors Reynolds and Eleanor Morse to stash their cache of Dalís in the Sunshine City.

The current building (1 Dalí Blvd.) dates to 2011 and houses over 2,400 paintings, drawings, sculptures, photos, manuscripts, and other creations from every stage of the artist’s career (he lived from 1904 to 1989). The famous Persistence of Memory painting isn’t here (New York City’s Museum of Modern Art is holding onto that one), but its diminutive follow-up—and Dalí’s farewell to surrealism—The Disintegration of the Persistence of Memory is on display here in Florida, along with a series of monumental “masterworks” each exceeding 5 feet in height or width. You'll also see dream visions inspired by religion, musings on nuclear weapons, and startling juxtapositions, as in the sculpture Lobster Telephone, which gives you exactly that. 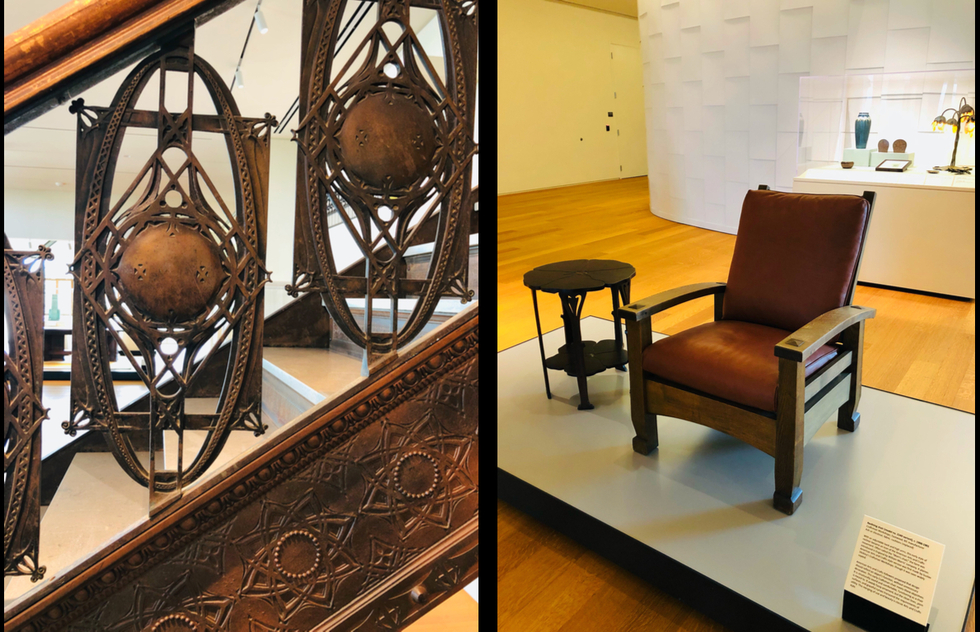 Another St. Petersburg art museum built to house the acquisitions of a collector with very specific interests opened in September 2021. The Museum of the American Arts & Crafts Movement (355 4th St. N), founded by local businessman Rudy Ciccarello and his Two Red Roses Foundation, celebrates the American offshoot of the British-born Arts and Crafts movement, a late 19th-/early 20th-century trend in decorative and fine arts that countered industrialization and the rise of mass-produced goods by emphasizing useful handmade objects with ornamentation drawn from nature.

The museum’s five floors of solidly built furnishings, fireplaces, light fixtures, and ceramics cover all the major artists, artisans, and architects of the era and those it inspired, from the makers of Craftsman homes to influential designers such as Louis Sullivan and Frank Lloyd Wright. 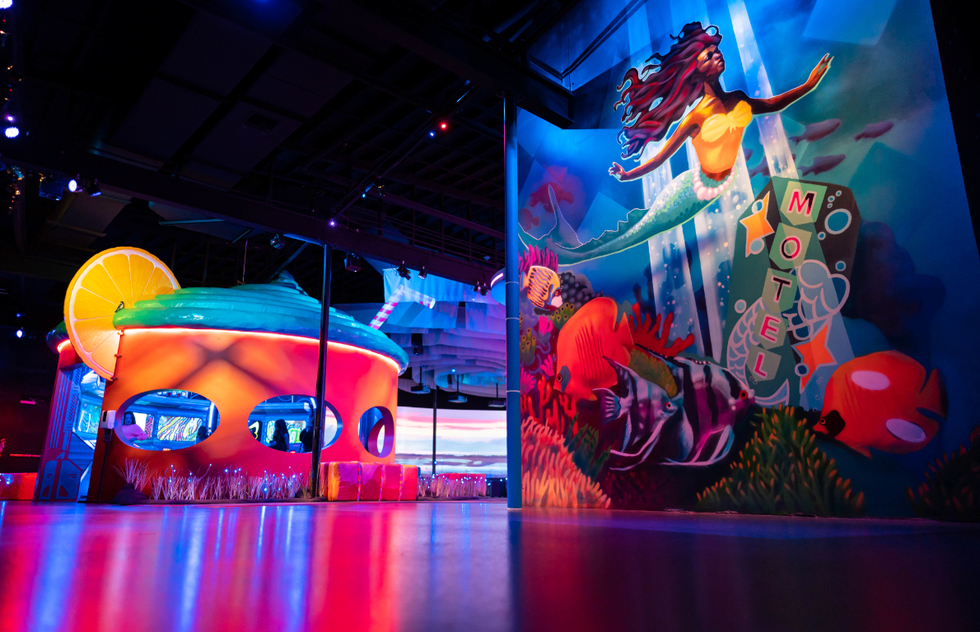 After looking at all those tasteful, well-made artifacts, you're liable to get a hankering for something wilder. Take a psychedelic chaser at Fairgrounds St. Pete (788 Fairfield Ave. S), a Meow Wolf–esque environment soaked in neon colors and stuffed with hallucinatory creations made by more than 60 local and international artists. A UV flashlight reveals special effects and helps unlock the mysteries of a storyline involving a motel, the paranormal, and several mainstays of Florida iconography (pink flamingos, wetlands). But it’s probably best to abandon plot mechanics and just enjoy the trippy visuals. 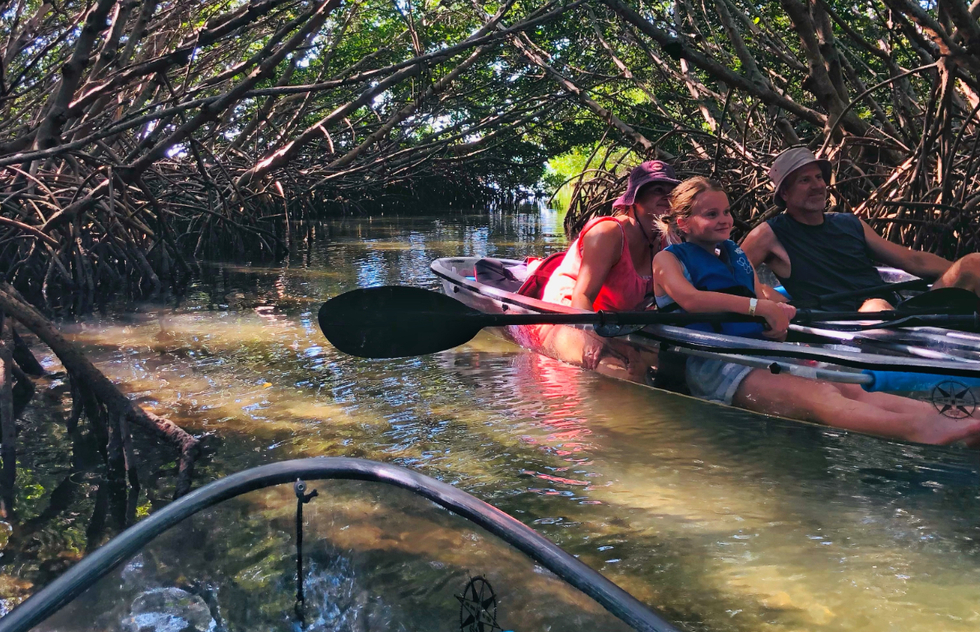 Speaking of trippy visuals, a company called Get Up and Go Kayaking leads tours of Shell Key Preserve (just outside of St. Pete) in transparent kayaks that sort of make you feel like you’re piloting Wonder Woman’s Invisible Plane, a sensation that’s only reinforced when sharp-beaked anhinga birds swoop down to swim alongside your vessel (they’re hoping your oars stir up some fish). On guided 2.5-hour excursions, kayakers also paddle through mangrove tunnels and pause for some shell collecting on a quiet, white-sand islet. If you’re lucky, you might spot dolphins or even a manatee. 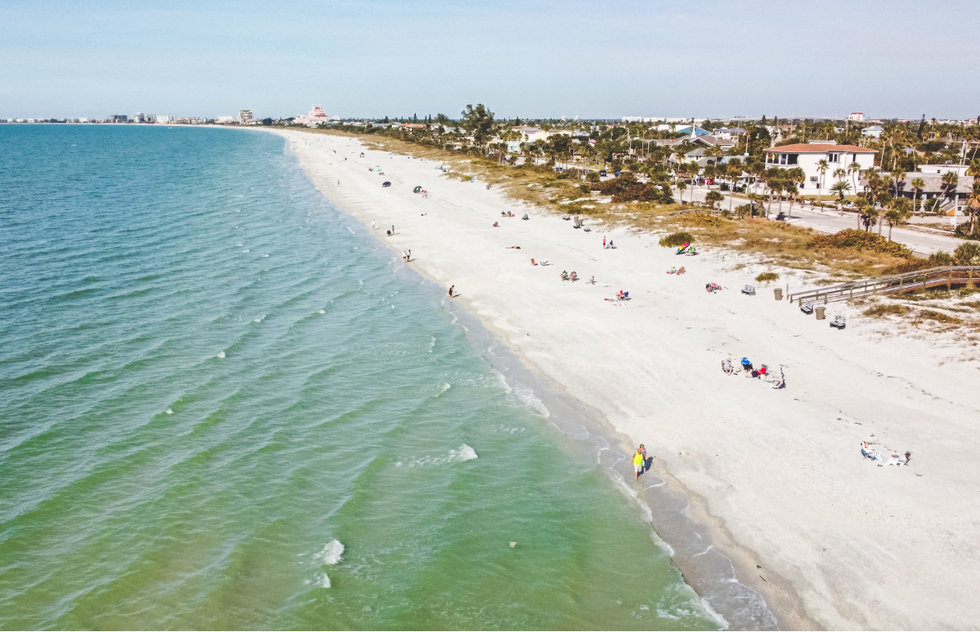 For that classic Florida experience we promised you, head to St. Pete Beach, which is technically a separate town situated on a barrier island west of St. Petersburg. If you’re only here for the day, snag a parking spot at Pass-a-Grille Beach (pictured above; get here early—spaces are limited) and drop your blanket somewhere along a wide, 4-mile stretch of soft, white sand between the blue-green Gulf of Mexico and dunes topped with grasses and sea grapes. When you need a break from the sun, take a stroll through the laid-back Pass-a-Grille community, stopping for brunch in the courtyard of the Dewey Beach Restaurant (109 8th Ave.) or admiring the original jewelry, Basquiat-like artwork, and unclassifiable whatsits at the Evander Preston Gallery (106 8th Ave.). 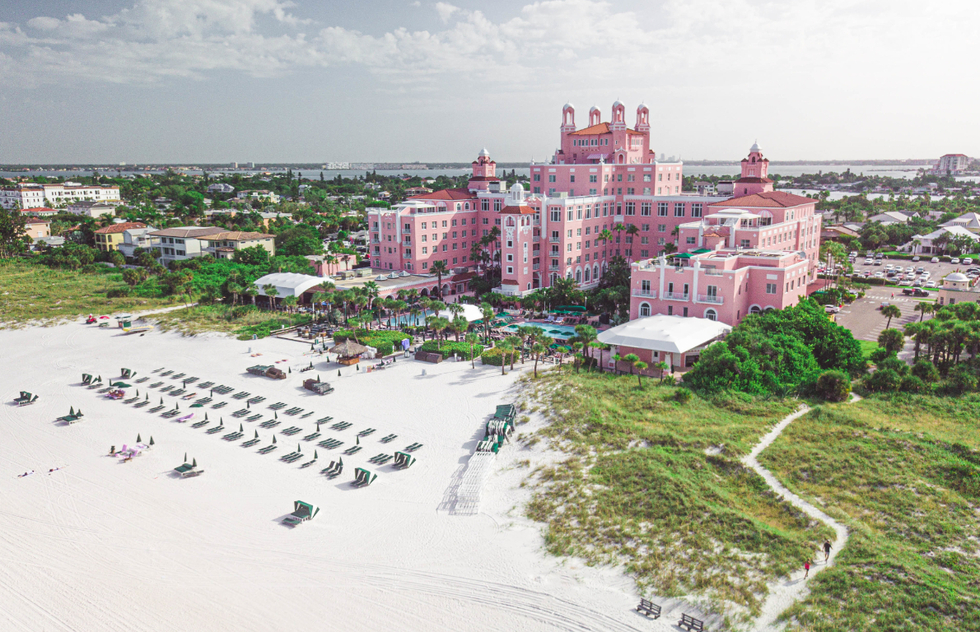 For an overnight stay with some Jazz Age opulence, your hotel choice has to be the Don CeSar (3400 Gulf Blvd.), a big pink wedding cake of a place that opened in 1928 and welcomed the likes of F. Scott Fitzgerald and Al Capone. After a three-decade stint as a military hospital and convalescent center starting in the 1940s, the “Pink Palace” was reborn as a resort in the 1970s and promptly resumed hosting movie stars and rock musicians (in the '80s, part of the Robert De Niro film Once Upon a Time in America was shot here, and Tom Petty recorded a concert on the roof).

As part of a multiyear renovation completed in 2021, all 277 of the hotel’s guest rooms received an upgrade, with new bedding and bath amenities, custom artwork incorporating a coastal bird motif, and reconfigured layouts meant to maximize space (by, for instance, replacing tubs with showers in some bathrooms).

Even if you’re not staying at the Don CeSar, it’s worth popping inside the landmark after nightfall for a drink in the green-and-gold lobby bar while a chanteuse warbles standards. That’ll cap off your St. Pete sojourn with a sophisticated flourish.