Thank you for subscribing!
Got it! Thank you!
Home›Tips & News›Air Travel›Stressed at LaGuardia? The Airport Will Bring You a Therapy Dog 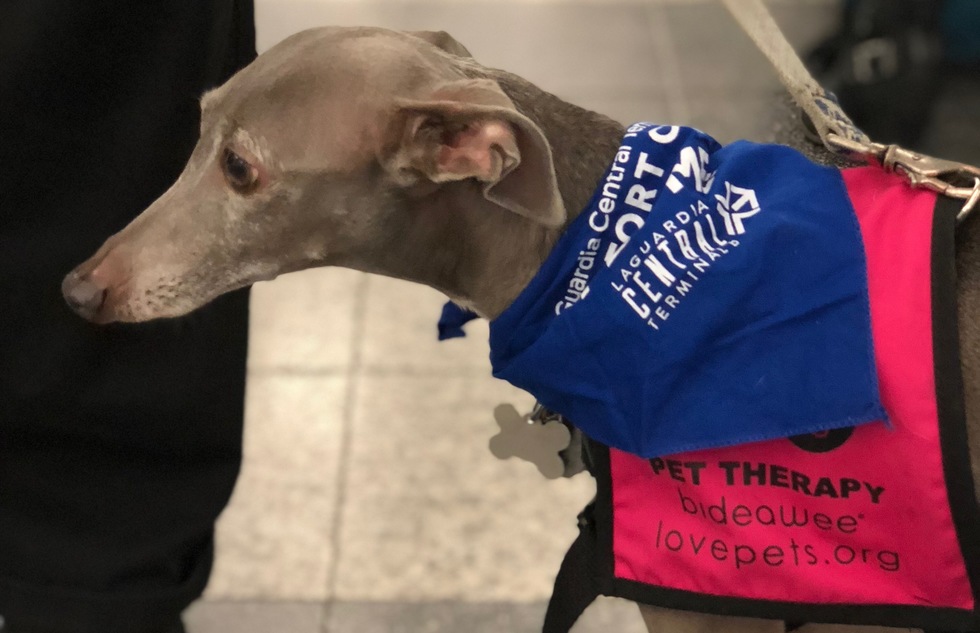 Stressed at LaGuardia? The Airport Will Bring You a Therapy Dog

Sure, a dog can make you feel better after you get fired, dumped, or diagnosed with something unpleasant. But can a dog improve life’s most trying experience—catching a flight at LaGuardia Airport?

On a Friday afternoon not long ago at one of New York City's primary hubs, the burden of de-stressing humans in that very predicament fell onto the narrow shoulders of Ziggy, a 9-year-old Italian greyhound with soulful eyes and the lithe limbs of a Balanchine ballerina, albeit one who’d eat a Cheez-It found on the floor.

“The best food is under the benches,” explained Ziggy’s owner-handler, Thomas Tulipan, a volunteer in the airport's pet therapy program.

It's a service organized by Bideawee, the venerable no-kill animal shelter and training provider, in cooperation with LaGuardia Gateway Partners, the company in charge of redeveloping Terminal B.

Starting around the busy Thanksgiving travel season in 2017, Tulipan and Ziggy have been members of a rotating crew of canine comfort units roaming both the pre- and post-security areas of the terminal on Fridays, usually a hectic day at airports. The dogs are also brought out at peak travel times including holidays and school breaks.

Similar pet-a-pooch initiatives have been put in place at airports in Los Angeles, Miami, Phoenix, and other cities across the country.

Ziggy and company are part of an effort to “transform the experience” at the terminal, Sandford says, bringing joy to travelers at an airport notorious for delays, cancellations, and decrepit facilities (LaGuardia topped our own list of the worst U.S. airports earlier this year).

The plan, according to Sandford, is to carry over the most successful improvements developed in the existing Terminal B to its long-anticipated replacement, which is under construction and expected to begin opening in phases over the next few months.

“We’re hoping to take a lot of that stress away,” says Sandford, “whether it’s with the design, new shops and restaurants, or therapy dogs. We’re really trying to ease passengers’ experience along the way.”

Along with free access to any crumbs under the furniture, the perks for Ziggy include interacting with people—especially children.

“He loves kids,” Tulipan said. “If he sees kids, he just goes right up to them.”

Calling to mind a genial supermarket greeter more than a backslapping politician, Tulipan worked the line at the Southwest Airlines check-in counter, passing out Ziggy’s “business cards” (featuring the dog’s name and a photo of him, looking startled) and fielding questions. The most common queries: “What kind of dog is that?” and “Can I pet him?”

A family headed to Houston told Tulipan about their own Italian greyhound and his blazing-fast running speed. Over in the Air Canada line, a woman traveling with a small child leaned down to pet the dog, announcing that his coat was “soft like a cloud” and telling Tulipan, “I needed that.”

Ziggy, meanwhile, submitted to these attentions with an imperturbable patience and, occasionally, shivers.

“It’s the breed,” said Tulipan, asserting that Ziggy’s sometimes trembling ears weren’t from anxiety but from being a thin, short-haired dog in a drafty airport.

His need for a sweater notwithstanding, Ziggy seemed to have the sort of stoic sweetness ideal for a therapeutic gig. 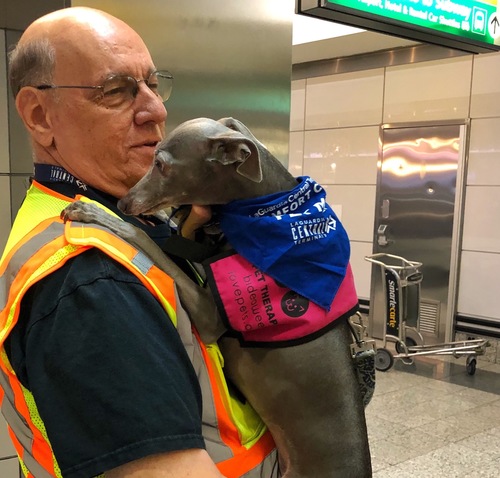 (Thomas Tulipan and his dog, Ziggy, a therapy animal at LaGuardia Airport; photo by Zac Thompson)

That’s no accident, according to Alicia Ryan-Meuschke, the senior manager of volunteer programs at Bideawee.

People who think their pets might make good therapy animals—not just at LaGuardia but at hospitals, schools, and nursing homes as well—can sign up for Bideawee’s five-week training program. At the end of the course, volunteers and their animals are evaluated to determine what, if any, type of facility they’re right for.

There are currently seven human-dog duos on the LaGuardia beat. They take turns visiting the airport each week.

“Airports are loud and crowded,” says Ryan-Meuschke, “so it does require a specific animal. We want to make sure they have the type of demeanor where they’re not going to be easily spooked, or if they get bumped from behind on accident, they’ll be okay with that.”

Since the dog’s owner is also its escort, trainers make sure that the two work well together. Additionally, human volunteers are instructed on the right way to approach people in the terminal and to avoid passengers traveling with their own pets, because who knows how those animals will react?

Ultimately, “pet therapy is bringing happiness to people who need it the most,” says Ryan-Meuschke. “If you’re stressed out, if you’ve been traveling all day, it’s been proven that petting an animal helps relieve stress. It makes you feel better. It brings you out of that slump of waiting around.”

But what if you're a cat person?

It so happens that Bideawee trains therapy felines, too—though they haven’t been invited to LaGuardia, at least not yet.

If the program does ever extend to other species, Bideawee promises that its therapy animals are all trained and insured—something that can’t always be said for the menagerie of emotional-support critters that passengers have brought to terminals across the country in recent months, prompting airlines to tighten their rules.

Bideawee’s Ryan-Meuschke suggests that trained therapy dogs on patrol might be a better alternative.

“Having our animals there,” she says, “hopefully that will bring [travelers] enough comfort where they don’t have to bring peacocks to the airport.”

Therapy dogs can be found before and after security checkpoints at LaGuardia's Terminal B on Friday afternoons and other busy travel times. Visit Bideawee's website to see the schedule.