Thank you for subscribing!
Got it! Thank you!
Home›Tips & News›Air Travel›The Fastest Way to Get from NYC to Boston? A Waterfront-to-Waterfront Seaplane 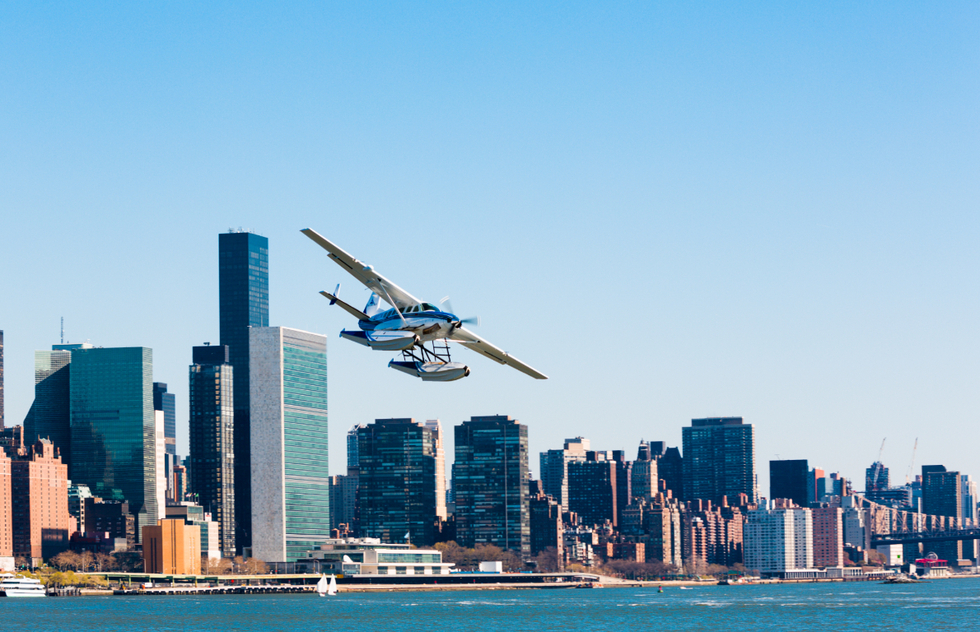 The Fastest Way to Get from NYC to Boston? A Waterfront-to-Waterfront Seaplane

One of the oldest airports in New York City is the East River.

A Manhattan base for seaplanes was installed on the waterway in 1936, predating the opening of LaGuardia Airport in 1939 and Idlewild (now JFK International) Airport in 1948. 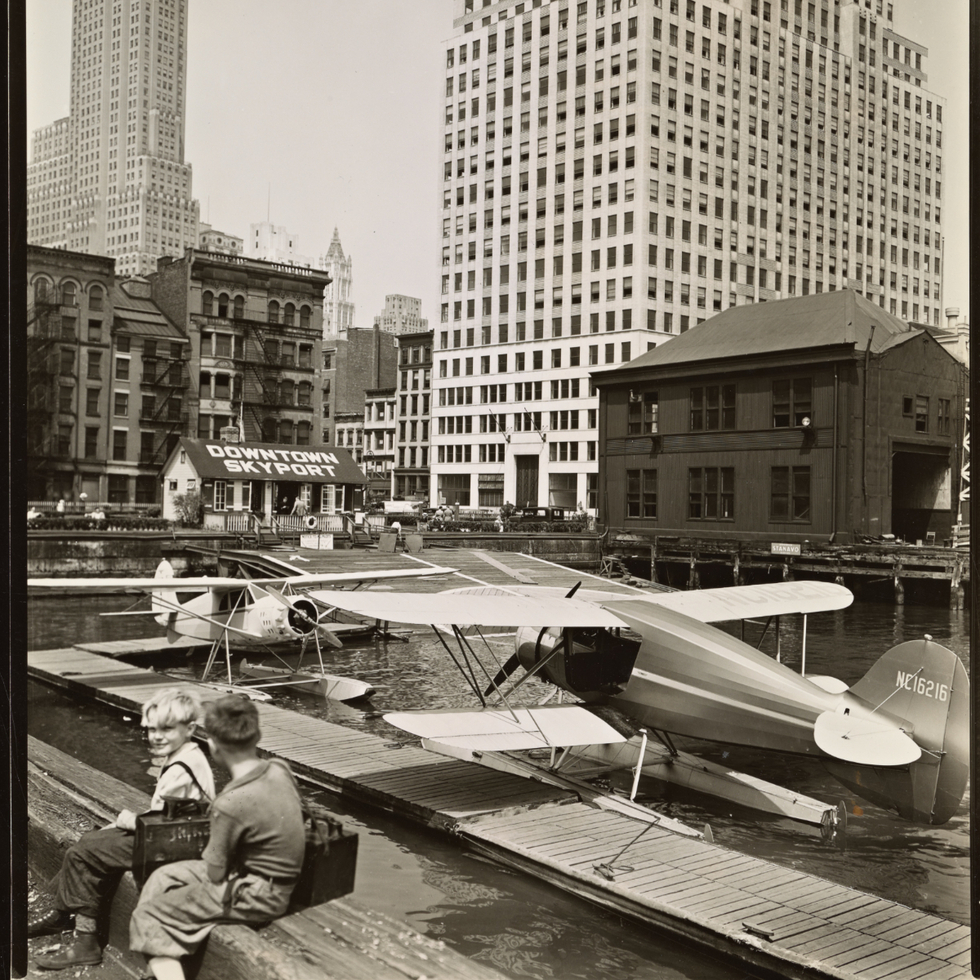 Liquid runways for commercial air travel never really, well, took off in the Northeast, though seaplanes remain a common sight in other water-adjacent locations such as Seattle, Miami, and Vancouver, British Columbia.

Manhattan’s Skyport terminal at E. 23rd St. and FDR Drive is still in operation, though. Today, the marina is most commonly used for amphibious aircraft operating sightseeing tours and weekend jaunts to the Hamptons, according to the Wall Street Journal.

In summer 2021, the Skyport also became one endpoint of the first regularly scheduled commercial seaplane service between New York and Boston in decades.

Operated by Tailwind Air, the roughly 75-minute flights aboard the company’s Cessna Caravans take off from Boston Harbor and land on the East River (and vice versa) four times a day, six days a week, with trips scheduled through November.

Tailwind touts the service as the fastest downtown-to-downtown option for traveling to and from New York and Boston for business meetings, rivalrous baseball games, Broadway shows, clam chowder infusions, and all the other good reasons for commuting between the cities.

Driving the same route takes four hours (or more with traffic), and Amtrak’s high-speed Acela train only shaves off half an hour from that, while the Northeast Regional rail service still takes four.

Traditional flights from Boston Logan to JFK or LaGuardia only last a little more than an hour, but you also have to factor in transportation to terminals situated outside the city center, not to mention the time it takes to check bags and get through security.

On a recent demo of Tailwind’s seaplane service, your Frommer’s correspondent showed up at Boston’s Seaport neighborhood a mere 15 minutes before the scheduled 1:10pm departure time, and crew members had the plane’s six passengers on a water taxi to the craft’s floating dock before you could say, “What, no TSA?” (Though there’s no security screening, safety guidelines do limit baggage to 20 pounds per passenger.) 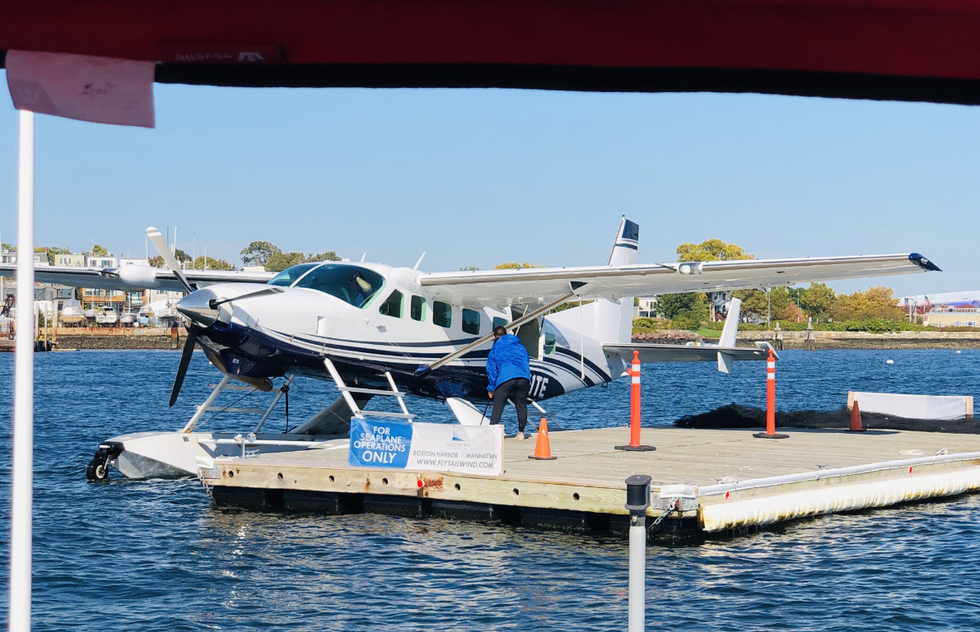 The trade-off for all this speed and convenience is price. Tailwind’s one-way fares between Boston and New York start at $395, which is significantly more than what you’d pay for Amtrak or conventional airline tickets. (A recent search for first-class Acela seats on this route returned one-way fares starting at $183.)

What kind of passengers pony up this much dough for an hourlong flight?

A publicist for Tailwind says the experience is popular with business commuters and weekenders with expendable income. But on the flight Frommer’s took, there was more variety than that. We met, among others, an amateur pilot geeking out over the aviation specs and a Berlin-based father-and-son duo who had embarked on an epic trip down the Atlantic seaboard. 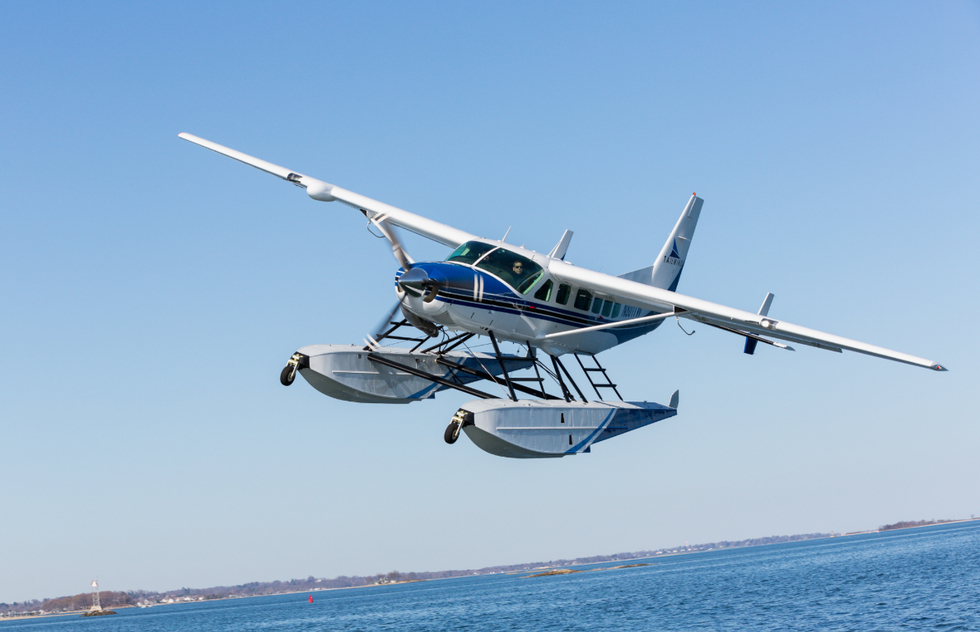 The flight itself is certainly memorable.

Inside the narrow plane, two lines of four seats give up to eight passengers thrilling, up-close views of two iconic skylines from two iconic waterfronts during takeoff and landing. 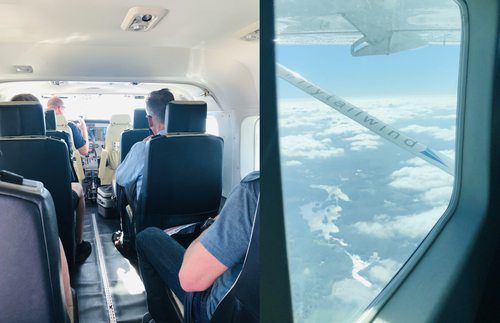 From Boston Harbor, the craft skates across the water on pontoons before picking up speed and swapping elements for the sky, showing off aerial views of bobbing sailboats, Fenway Park, the Prudential Tower, and the inverted tuning forks of the Leonard P. Zakim Bunker Hill Memorial Bridge.

Slicing diagonally across Rhode Island, a corner of Connecticut, and Long Island, the flight hovers over a wooded landscape threaded with rivers. In October, the scenery is painted in autumn shades of rust and gold. The plane’s altitude never exceeds 10,000 feet, allowing for prime views and some cell phone reception so you can send envy-sparking pics to your friends. 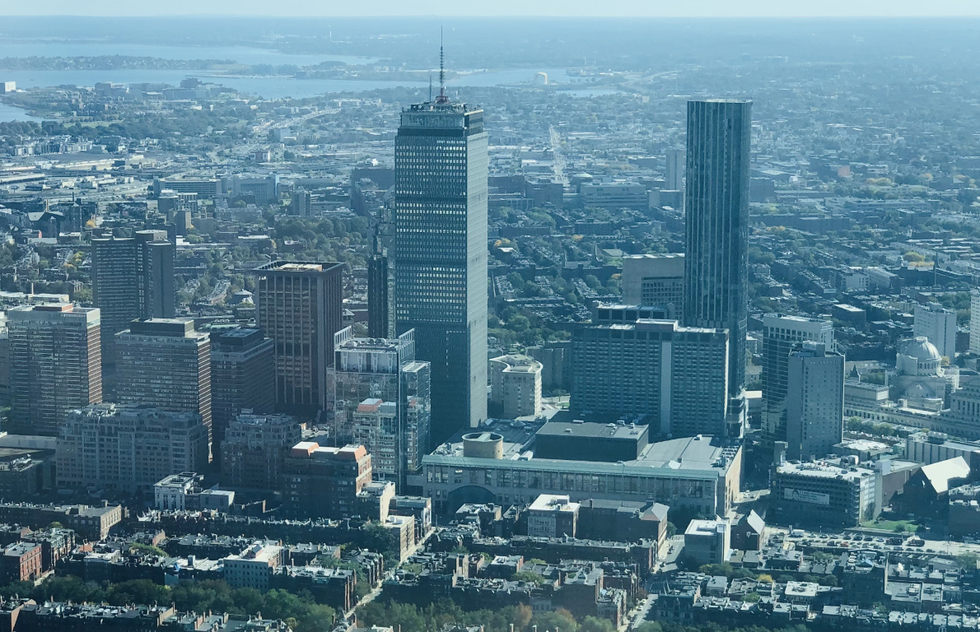 Touchdown involves a show- and heart-stopping descent in New York, complete with glimpses of the Brooklyn Bridge, One World Trade Center, and the other skyscrapers of Lower Manhattan, culminating in a juddering landing on the East River. For the comfort of your fellow passengers, try to avoid mentioning Sully Sullenberger until the plane has come to a safe stop.

Tailwind Air plans to operate seaplane flights between New York and Boston through November (though that’s subject to change if there is inclement weather). After a winter hiatus, service will resume in spring.

For more information or to book a flight, visit FlyTailwind.com.