Thank you for subscribing!
Got it! Thank you!
Home›Tips & News›Health, Insurance, Security›U.S. State Department Travel Advisories: Where to Find Them, How to Read Them 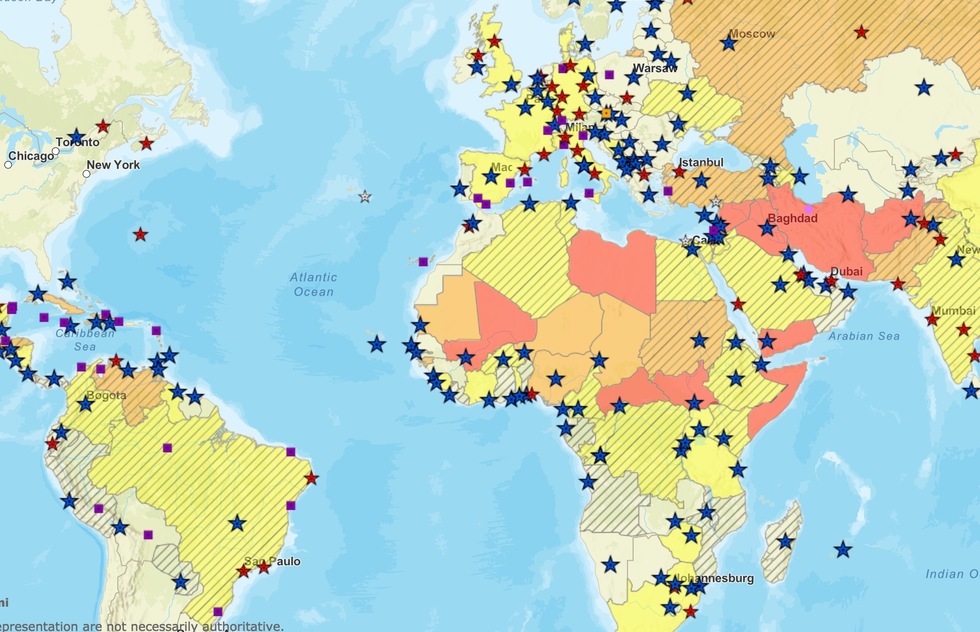 U.S. State Department Travel Advisories: Where to Find Them, How to Read Them

In 2018, the U.S. State Department revamped its travel warnings to make them easier to understand. Here's how to find them and how to use them to plan a safe trip overseas.

Pop quiz: What's the difference between a "travel alert" and a "travel warning"?

If you don't have a clue, the U.S. State Department determined that you're not the only one.

Widespread confusion over the meanings of those terms in the advice issued by the agency for Americans planning international trips persuaded the government to come up with a different way of doing things. It used to be that some places received both an alert and a warning, but that's no longer possible. (Which means there's no longer a correct answer to the trick question above—sorry.)

Under the new system, every nation on earth will be assigned a simple travel advisory ranking from 1 to 4. Here's how travelers should proceed with their planning to countries at each level, according to the State Department:

Switching from two types of advisories to four levels might sound like things have gotten more complicated, but the new method allows for more nuance and variation, reflecting the different security concerns travelers face.

Another helpful facet of the four levels: The State Department can apply them regionally when some parts of a country are considered safer than others. A nation's cosmopolitan capital city, for instance, could be a level 2, while the more violently factional hinterlands could be rated level 3.

As we pointed out when the changes were announced: "Before revamping, the travel alerts and warnings required close reading in two categories to interpret the specific advice, but the new system makes it instantly clear what the current advice is for any nation."

All of these advisories are suggestions—albeit strong ones in many cases—rather than laws. Even Level 4 does not forbid travel, though you're strongly encouraged not to do it.

The whole system is easy to understand due to an interactive map (pictured above) at the State Department's website that's color-coded to show each country's advisory ranking. Red means level 4, orange is 3, and yellow 2. Level 1 countries are beige.

More information about the threats involved in visiting countries ranked 2 and higher can be found by clicking those nations on the map.

If numbered and color-coded threat levels seem familiar, that might be because the Department of Homeland Security once employed a similar "Security Advisory System," but that scheme broke down because of misapplication and a general confusion about what the various colors meant. It went out of service in 2011.

The State Department wants to avoid a similar fate for its new system of levels, which is why there are only four—Homeland Security used five—and each one is associated with a clear action.

The agency says that it has not changed the way it assesses risks, but has merely altered the way that information is communicated to the public.