Thank you for subscribing!
Got it! Thank you!
Home›Tips & News›Hotels›12 Hot and Fresh Hotels to Book in 2019 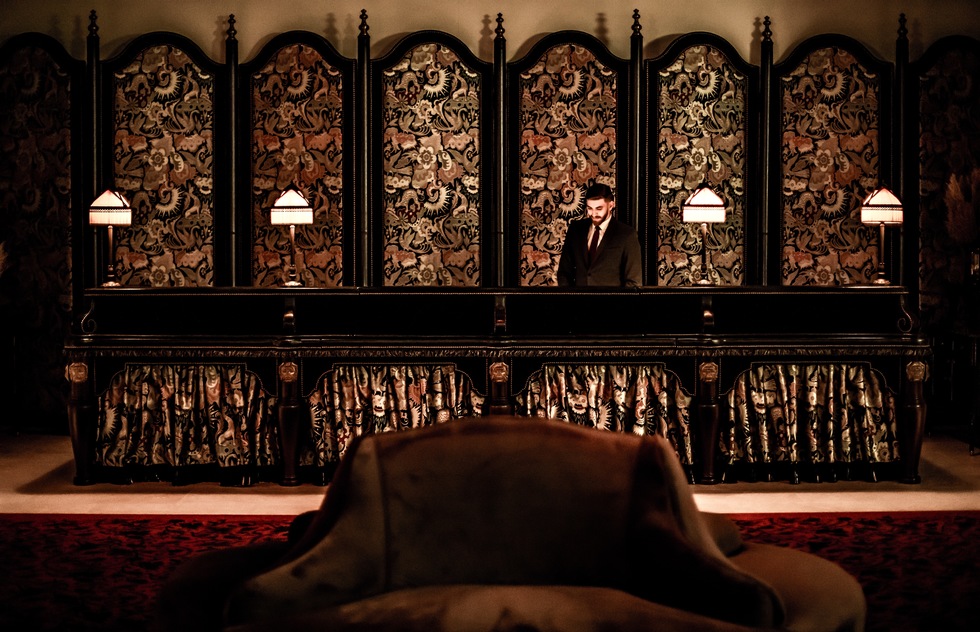 A dozen new hotels that are cool right now: From beach vacations to gambling weekends, luxe to lax, there's a brand new hotel opening to suit your tastes.

Gotham crashes Sin City in the form of The NoMad Las Vegas, a sultry boutique hotel (pictured above) located within The Park MGM Las Vegas. As the third outpost in the NoMad collection (the original is in New York; Los Angeles opened in 2018), this hotel offers much of what the other NoMads do: rooms with eclectic style, curated artwork, and hardwood floors (a rarity for Vegas) along with a lively bar (NoMad bars are always throbbing) and the gorgeous NoMad restaurant lined with 20,000 tomes from the Rockefeller family’s private collection. A Moroccan-inspired rooftop pool and a small casino room are coming soon, but there's plenty of gaming on the Strip nearby. Within the Park MGM resort, there’s also an Eataly restaurant and Lady Gaga’s mini-residency, Enigma. Rates start around $315 a night for a classic king.

The Yotel brand started out with capsule-type rooms inside airports in the U.K., but its first stand-alone hotel in Times Square got the most attention for its Yobot, a luggage-storing robot. Sadly, there’s no robot in at Yotel San Francisco, located within a historic building on Market Street at 7th Street, but the cabins (as Yotel calls their guest rooms) are gussied up with mood lighting, rain showers, and smart TVs. Perhaps Yotel’s main selling point is the variety of cabins, from a tiny interior room made for one person to a room with a bunk bed to a corner suite with Instagram-perfect views of San Francisco. In a city this expensive, options help. Rates start around $150 a night for a queen bed.

The American watchmaker and luxury goods company, Shinola, has opened its first hotel in Detroit’s downtown shopping district within two restored historic buildings. The 129 guest rooms at Shinola Detroit feature striking custom furniture and accessories, much of which was produced right there in Michigan. Other local amenities include the minibar snacks, drinks, and artwork from Detroit’s art community. And of course, Shinola’s popular retail items furnish the rooms, including blankets, bedside clocks,—even shoe polish. NYC-based chef Andrew Carmellini has put together the San Morello restaurant off the lobby, while The Brakeman beer hall, serving Midwestern craft beers, is set to open this spring. Rates start at $195 a night for a Study Queen room. 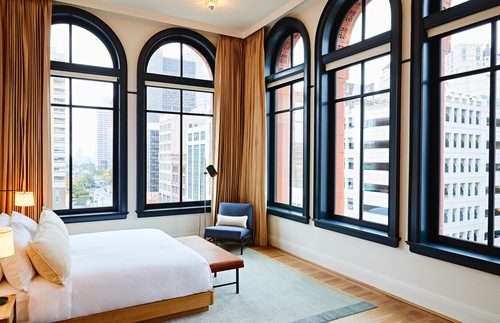 Legendary hotelier Ian Schrager returns to Times Square, where he co-created Studio 54 and early chic-boutique hotels Royalton Hotel and Paramount Hotel, to open his international hotel brand. There’s already an Edition next to Madison Square Park, but the Times Square edition (see what we did there?) is upping the nightlife quotient with three restaurants from award-winning Chef John Fraser and a cabaret theater within its Paradise Nightclub. The 452 guest rooms at Times Square Edition, owned by Marriott, are swathed in beiges and creams, providing a zen contrast to the urban jungle outside. Rates are just under $300 right now but jump up to $475 for a queen room in April. Open now.

Not flush enough for Edition? Head south to the Moxy Chelsea on W. 28th Street. Moxy is an unapologetically millennial-oriented hotel brand, also by Marriott, where the lobby is the center of the action and every nook and cranny can and should be documented on social media. There are Moxys popping up all over the United States and Europe, including one in Times Square, but the Chelsea location offers a bit of a reprieve from the action. Rooms are tiny (just under 200 square feet.) but the decor is peppy and filled with useful amenities such as convenient power ports and the option to your stream your own content to the flat-screen TV. A coffee shop and an upscale Italian joint are coming soon and a 35th-floor rooftop lounge should open just in time for warm weather. Rates start around $248 a night in April for a king bed.

At long last, there’s a Virgin you're welcome to sleep with. After opening its inaugural hotel in Chicago in 2015, Virgin Hotels, a brand that tries hard to be liked and appeals with fresh and forward-thinking design, finally opened a follow-up in San Francisco's central SoMa neighborhood. The 192 futuristically-styled chambers (as Virgin calls its guest rooms) feature dressing rooms separate from the bedrooms and cherry red Smeg mini-fridges. A Commons Club lounge and restaurant along with a ground-floor coffee shop amuses guests by day. Virgin will also open in New York and Las Vegas later this year. At the Virgin San Francisco, rates start around $200 a night for a chamber king. 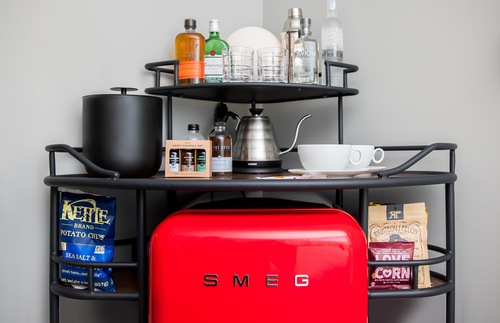 A little bit of Europe will blow into the Windy City with the opening of The Hoxton Chicago in the Fulton Market District. The affordable, London-born hipster hotel brand, which also has properties in Paris and Amsterdam, recently opened two U.S. locations in Brooklyn and Portland, Oregon. But the Chicago hotel will have a few things that other Hoxtons won’t, like a co-working space, a wellness studio, and a rooftop pool. Each of the 182 guest rooms range from Snug to Roomy and Cosy (the British spelling for a British brand), and all have a midcentury flair and books chosen by locals. Opens in April.

This former Courtyard by Marriott in Miami’s Mid-Beach neighborhood is looking all sorts of glamorous, thanks to a top-to-bottom makeover and new Autograph Collection status (that’s Marriott’s design hotel portfolio). The guest rooms at Cadillac Hotel & Beach Club in Miami Beach feel more French Riviera than South Florida, with bar carts that double as minibars and palm frond wallpaper in the bathrooms. The two lobby bars are choice spots for hanging out, but the casual tiki bar out back is just what you need after a long, cold winter. It’s also accessible from the beach’s boardwalk—most Miami Beach hotels require a key card to enter this way. You won’t have to go very far to find some fun: nearby, you'll find other standout hotels such as Soho House, Eden Roc, Faena, and The Confidante. 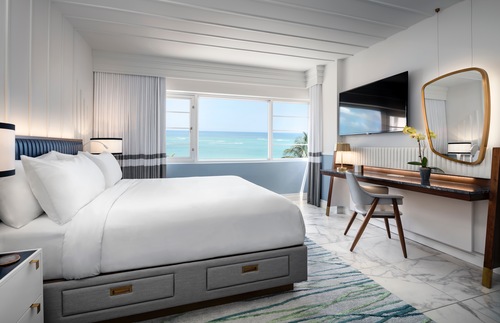 Nashville’s boutique hotel scene continues to burn bright with the arrival of a Dream Hotel in Printer’s Alley. The brand new property has 168 guest rooms featuring a sleek Art Deco style, with bold jewel tones on the walls and fabrics, rather than the honky-tonk vibe more prevalent in these parts. Loft ceilings and C.O. Bigelow toiletries are just some of the in-room delights. Two restaurants and a bar round out the social offerings, and all that Nashville has on tap is pretty much just steps from the front door. The Dream brand is known for its bumping nightlife scene, so you may want to BYO cocktail outfit—or BYO earplugs. Rates start at $308 for a bronze king room.

An unusual hotel with a mission to fully focus on art throughout the guest experience, its motto is to “invite participation and expect change.” Developed by the Marcus family, who founded the city’s outdoor sculpture exhibit, Saint Kate Milwaukee will have 219 hotel rooms (all kitted out with carefully chosen local artwork), but it's also like an art center, with three restaurants, a handful of bars and lounges, and a theatre that will feature plays, lectures, performances, and classes. A working Artist-in-Residence studio is also planned, as well as rotating art exhibition. Opens in May.

California dreaming? Then consider dreaming at the Santa Monica Proper Hotel, which will open in May. Located at 7th and Wilshire, near many of the big names in tech and websites, the design hotel is seven long blocks from the beach, but just the right distance from the city’s bustling tourist center. The 271 guest rooms will be done in a quintessential California style—relaxed and natural, suiting the rising hotel brand's suave and sophisticated style. There will also be a rooftop pool and restaurant, a wellness and fitness studio, an Ayurvedic spa, and a ground-floor restaurant from Chef Jessica Koslow of L.A.’s cult favorite café, Sqirl (which Frommer's recommends). Rates will start at $450 a night.

Another Art Deco building in Miami Beach will be reborn as a cool new place to be seen. Formerly the Greenbrier Hotel, which was first built in 1940 on Indian Creek Drive, the Palihouse Miami will have 71 oversized and happy-colored guest rooms and studios, most with kitchenettes and most definitely outfitted for longer stays. The Greenbrier name will live on in the hotel’s swim and social club, which includes the lobby lounge, cocktail bar, front patio, and swimming pool. Guests will also have access to a beach club and a waterway dock. Palihouse, a niche name on the West Coast, is an upscale choice with a members-only kind of vibe—some of its restaurants are only open to hotel guests. 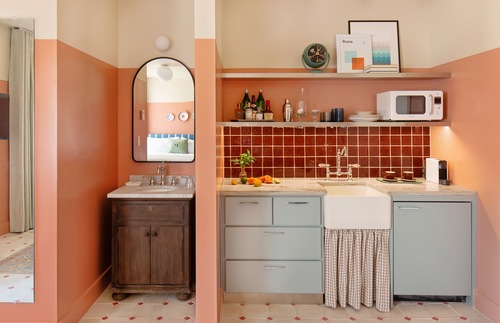