Thank you for subscribing!
Got it! Thank you!
Home›Tips & News›Photography›Road Picture: Instagrammers Travel to Reenact Iconic Film Scenes 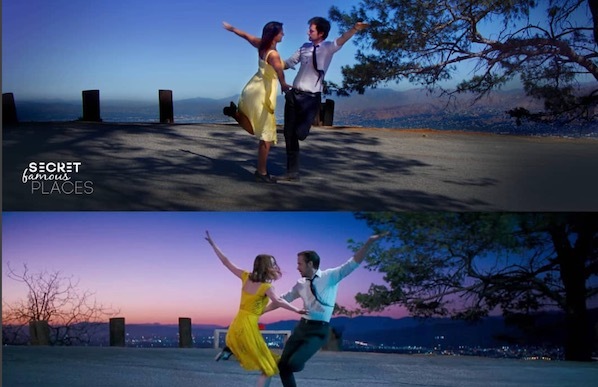 Frommer's chats with a German couple who take movie-centric travel to a whole new level.

German couple Judith Schneider and Robin Lachhein put to shame any Instagrammer who has ever posed for a cheesy vacation pic mimicking the Joker dancing on stairs or Maria von Trapp spinning on Alps.

On their own Instagram page, Secret Famous Places, Schneider and Lachhein post painstaking re-creations of stills from movies and TV shows, reproducing camera angles, wardrobe choices, and actors' facial expressions and body positions in the exact locations used on screen.

The couple, both of whom are in their early thirties, began pursuing their unique hobby about six years ago, they told Frommer's.

Based in the town of Hofheim near Frankfurt, Schneider is an editor at a radio station and Lachhein is a mechanical engineer. They pay for the photo shoots themselves—"We have no sponsors," Lachhein points out, "no company behind us."

"And no rich parents," Schneider adds.

Instead, the project is a labor of love combining twin passions for travel and movies.

"At first we thought, it can't work," said Schneider. "It's too much organization."

After initially using the movie and TV photos to decorate their home, the pair was eventually encouraged by friends to start an Instagram account, which debuted in January 2018.

Among the scenes they've re-created: Forrest Gump jogging through Arizona's Monument Valley, Daenerys Targaryen of Games of Thrones presiding over a rocky islet in Spain, and a La La Land dance number (pictured at top) at Griffith Park in Los Angeles.

The couple combines photo shoots with their annual vacation. "We decide which country we can visit," Lachhein explains, "and then we search for filming locations of movies and TV series in that country."

This year was supposed to be Italy, but the trip was postponed due to the pandemic.

The vacation destination isn't usually chosen just to get a shot—this is a hobby, after all, not a paying gig—though Schneider is considering making an exception.

"I really want to take a picture of Pirates of the Caribbean," she says, "but we haven’t been there."

They don't allow themselves to use Photoshop except for color correction—no deleting stray motorcycles or errant bridal parties (as in the Paris-shot Inception photo) permitted.

"At first, we were angry that there were things [in the re-creation] that aren’t in the original scene," Schneider says, "but now we like it when there are little differences. They make us smile."

Asked to choose a favorite photo, Schneider selects the Thelma & Louise homage, shot in Utah's Arches National Park, because she liked the mountainous landscape and because she thought her partner looked funny in his police costume.

"But I love each picture," she says, "because every one has its own story and its own adventure."

And to plan your own reenactments, check out our feature on classic movie locations around the world.