Thank you for subscribing!
Got it! Thank you!
Home›Trip Ideas›Arts and Culture›Frommer Guide Flashback: Why Is Barcelona's Sagrada Família Still Under Construction? 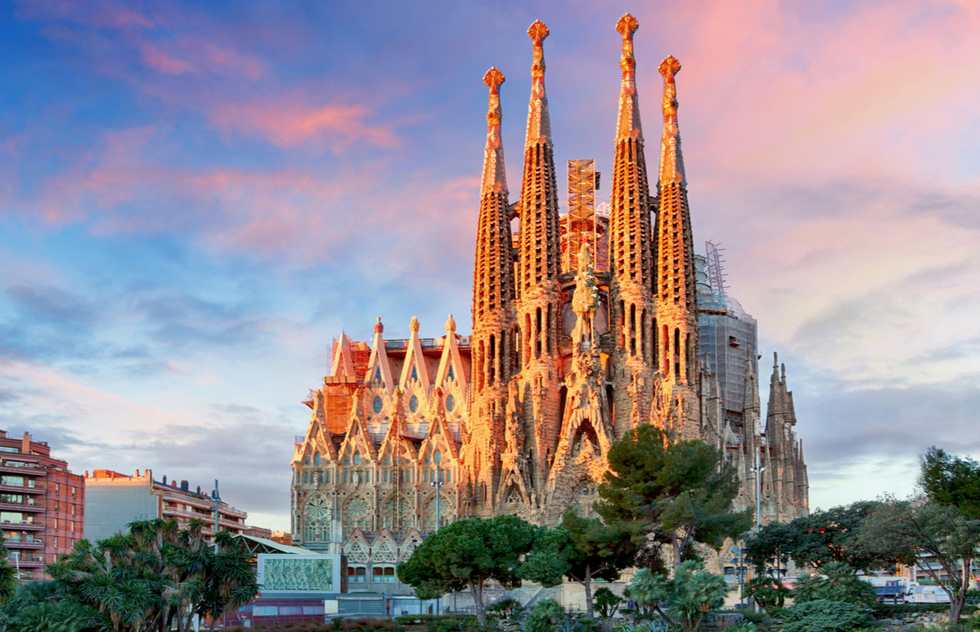 Gaudí's fanciful masterwork of a church has been in the works since 1882. What in heaven is taking so long?

The first Frommer’s guidebook, Europe on 5 Dollars a Day by Arthur Frommer, was published in 1957. In our series of Frommer’s flashbacks, we’re revisiting noteworthy places featured in the earliest Frommer’s books to see what’s changed and what has stayed the same in our 65 years of showing you around the globe.

The Temple of the Sacred Family
This uncompleted work by the irrepressible Gaudí, who died in 1926, is a symbol of the defiant spirit of Barcelona itself. If you have time to see only one Catalán landmark, see this cathedral. It is situated at Calle Mallorca–Provenza y Marina-Cerdeña (take trams 37, 46, 47, or 60). Begun in 1882, this incredible cathedral is one of the most dazzlingly bizarre wonders of Spain. Its appearance is so odd that it’s difficult to describe, and must be seen to be appreciated, but this may give you a clue: spatial looseness à la art nouveau, wildly ornamental figures, four principal well-ventilated tapering towers, with celestially orbed peaks fringed with balls, and lots and lots of melting gingerbread draped in a majestic batter-like ooze over a forest of stalagmites and jutting brown icicles! You have to pay 10 pesetas (17¢) to go inside the grounds, but why bother? Once you’ve seen the amazing façade, you’ve had the best of it. Gaudí may have been insane, but he was never a bore! 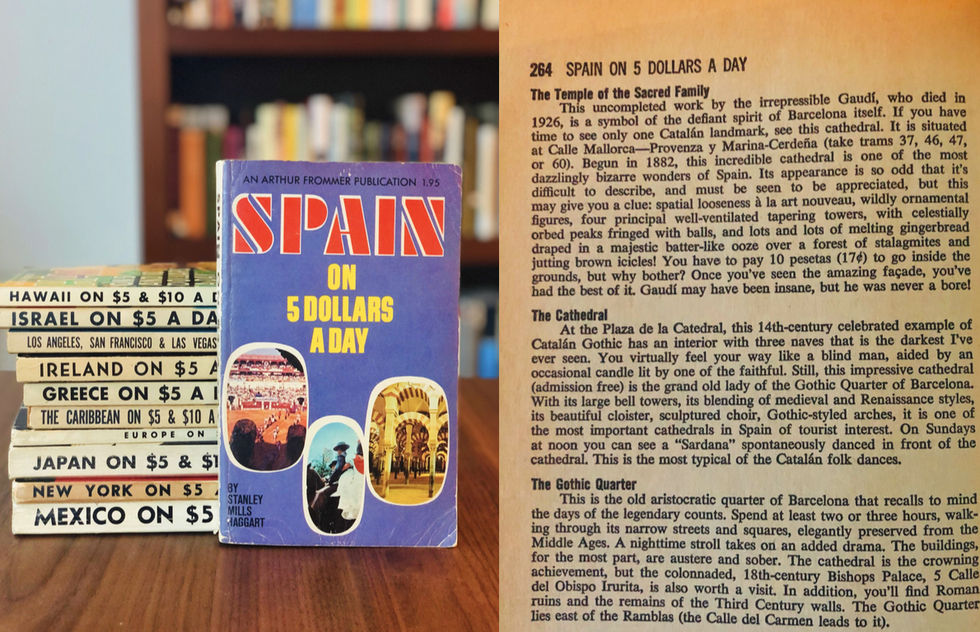 First of all, “insane” seems a little harsh. Sure, Antoni Gaudí had an idiosyncratic artistic vision, was far more devoted to Catholicism than personal hygiene, and preferred to dine on nothing but lettuce leaves dipped in milk. But the polite term for an artistic genius such as the foremost exemplar of Catalan Modernism would be “eccentric.”

Also in need of updating in our mid-‘60s write-up of La Sagrada Família: the public transit info (Barcelona’s once extensive tram network has since been mostly replaced with buses, and the basilica got its own Metro station in 1970) and the price of admission. Touring the church with an audio guide now costs €26 ($30), not counting the elevator ride up the towers, which will set you back a whopping €55 ($63). There goes your $5 daily budget.

Otherwise, though, Haggart’s decades-old take remains pretty accurate, starting with his description of the construction as “uncompleted.” The fantastical church has been in the works since 1882, with no end date currently projected. 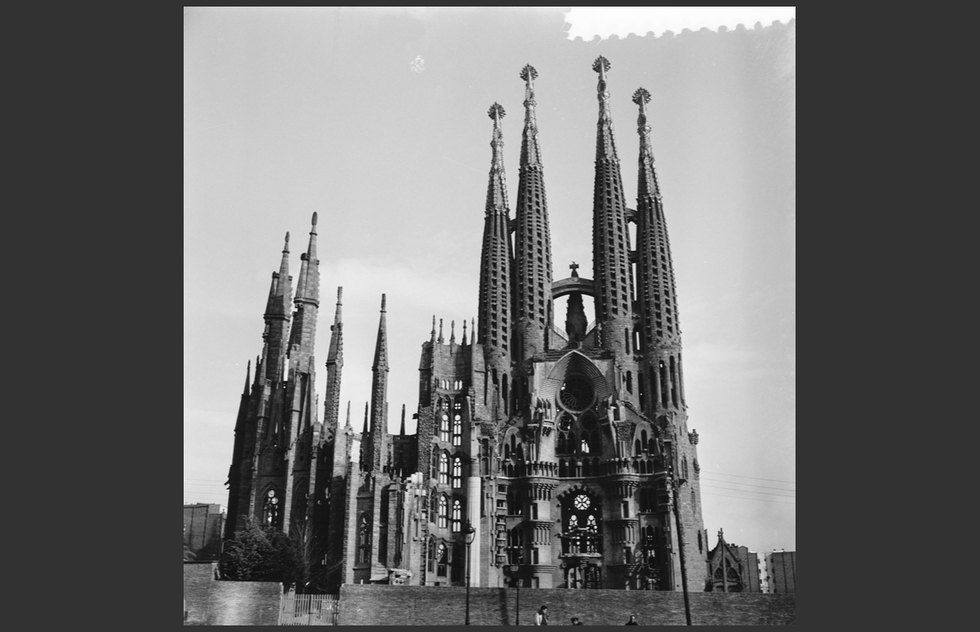 What Is Taking So Long?

The project lost its master architect in 1926, when Gaudí was struck and killed by one of those trams we mentioned earlier. He was on his way to daily confession and was initially mistaken for a beggar (we weren’t kidding about the artist’s fanatical Catholicism or his indifference to maintaining a tidy appearance). Only about 20% of the church was complete.

Work on the basilica then fell to Gaudí’s disciples, who hit a major snag during the Spanish Civil War: Catalan revolutionaries broke into Gaudí’s old workshop, setting fire to his plans and smashing his architectural models. George Orwell, for one, later expressed dismay that the anarchists didn’t destroy the actual church—“one of the most hideous buildings in the world,” he opined in Homage to Catalonia.

The lack of undamaged, Gaudí-authored blueprints has been a source of controversy ever since. Gaudí’s followers and a series of subsequent lead architects reconstructed the original design as best they could, relying on surviving fragments and guesswork. But plenty of preservationists argue that only the parts of the church that were completed at the time of Gaudí’s death count as authentic. You can include UNESCO among that camp—only La Sagrada Família’s crypt and Nativity facade on the eastern side of the building have attained World Heritage status.

During Franco’s reign and even for many years afterward, meager funding meant the reconstructed design wouldn’t make much progress anyway. The church’s literal fortunes improved, though, as more and more tourists poured into Barcelona, often via cruise ship.

By the 1990s, things were picking up again at the world's pokiest building site—and, really, what construction project doesn’t need a century or so to get going in earnest? 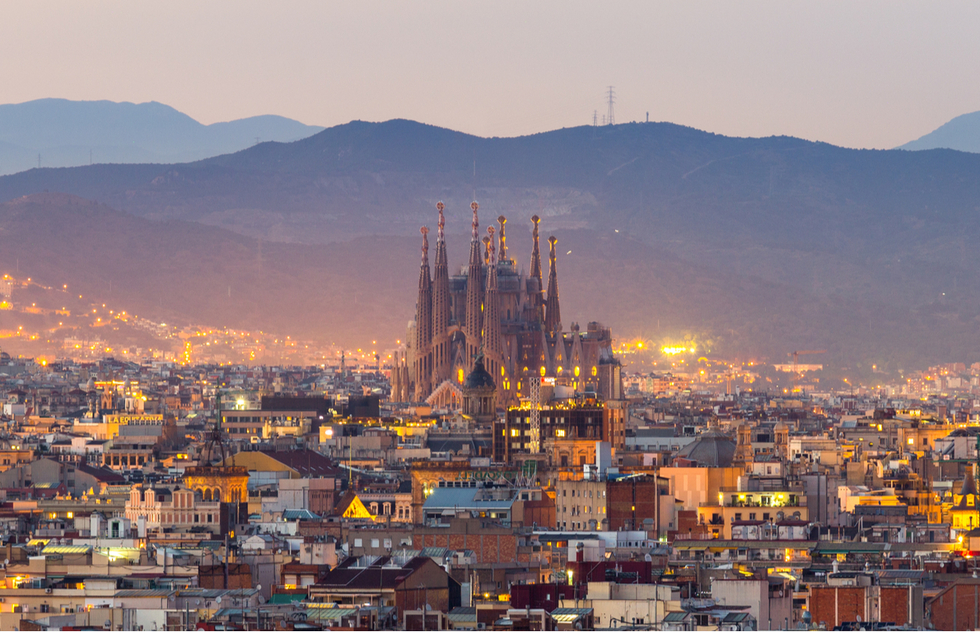 Welcome additions in the 21st century have included such innovations as a roof. In addition to keeping out the elements, that long-delayed feature also helps realize Gaudí’s vision for the soaring interior as a kind of magically lit sacred forest.

But arguments over the best uses of the site continue to arise.

Engineers worried about the structural soundness of the building when high-speed rail tunnels were installed under the church’s foundations starting in 2010.

Orwellian art critics find some new elements of the design inharmonious to say the least (the most recent edition of Frommer’s Spain regrets the cluster of “overgrown Lego blocks” protruding from the western portal).

And locals object to skyline-blocking, real estate–devouring plans such as huge towers and an enormous stairway that, if built, would require demolishing three whole city blocks and displacing hundreds of families and businesses.

Most recently, a 5.5-ton, 12-point glass-and-steel star was plunked down on top of the freshly completed tower of the Virgin Mary. When all is said and done, the basilica will have a total of 18 towers, one of which will reach a height of 172 meters (564 ft.), making La Sagrada Família the tallest church in the world. 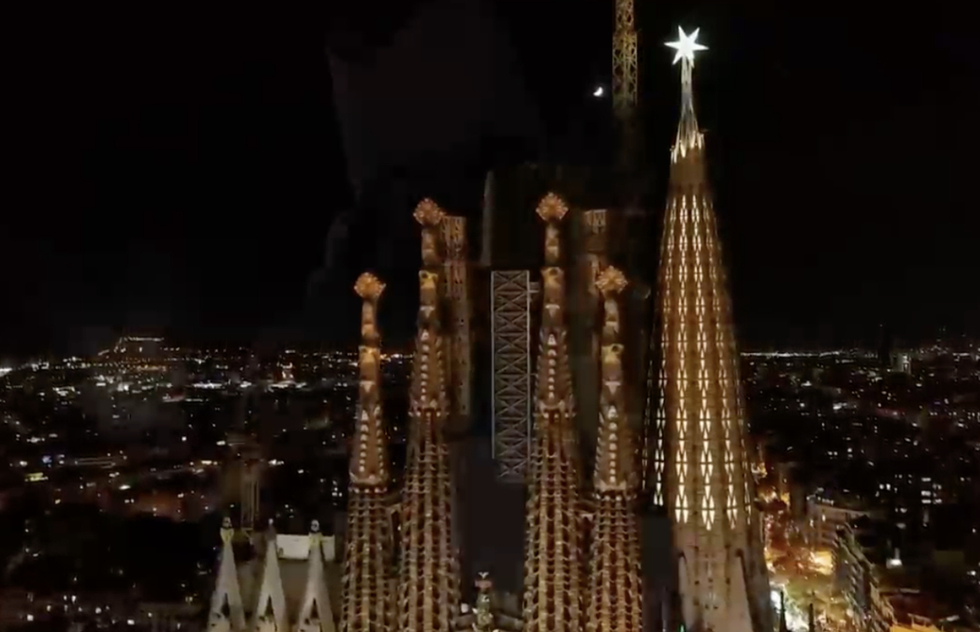 Finishing those spires is the bulk of what remains to be done at the construction site. A goal to complete the job at long last in 2026 to coincide with the 100th anniversary of Gaudí’s death has been abandoned due to delays caused by the Covid-19 pandemic. A new deadline has not been set.

Let’s just hope the church is complete in time for the 2066 edition of Frommer’s Spain on 1 Bitcoin, 3 NFTs, and 7 Dilithium Crystals a Day.