Thank you for subscribing!
Got it! Thank you!
Home›Trip Ideas›Food and Drink›How Dallas Became the Frozen Margarita Capital and Found the Tequila Tourism Limelight 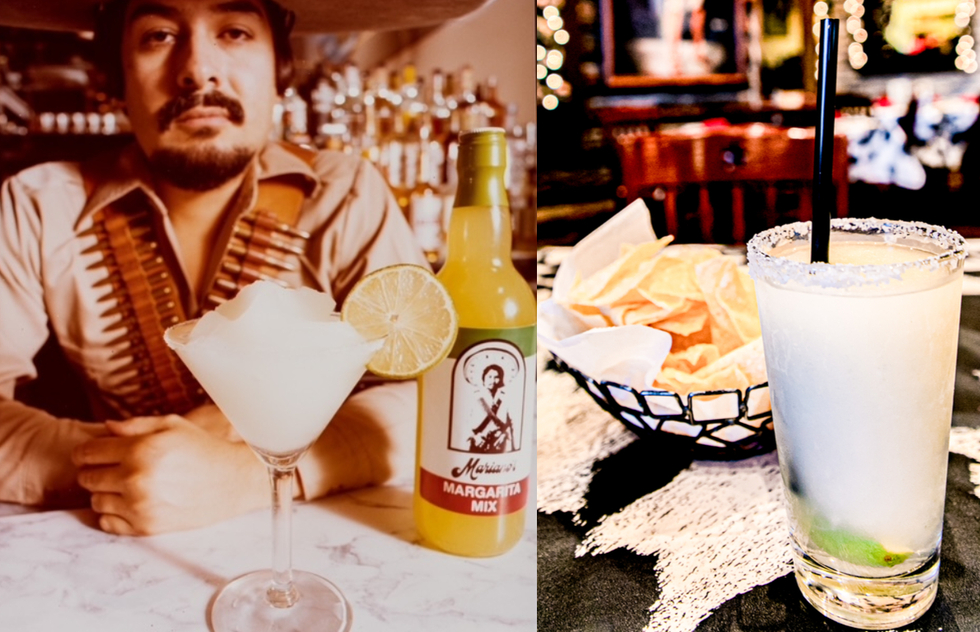 Fifty years after inventing the frozen margarita machine, Dallas restaurateur Mariano Martinez sat down with Frommer’s to talk tequila, Tex-Mex, and why you should make a boozy pilgrimage to his city’s Margarita Mile

There are lots of places across the United States where you can pay tribute to the country’s great inventors and innovators, but very few, if any, of those institutions serve tequila (which is something to consider, Thomas Edison National Historical Park).

A notable exception to that norm is Mariano’s Hacienda, the Mexican restaurant in Dallas that was the birthplace of the frozen margarita machine.

May 2021 marks the 50th anniversary of that appliance’s creation. Just think of all the happy hours, bachelorette parties, and hangovers it has made possible over the years. The mind boggles. No, wait—that’s just brain freeze.

The machine’s creator, Mariano Martinez, figures he deserves some credit for the nation’s birth rate, too.

“One guy told me, ‘I think you’ve been responsible for more kids than all the fertility clinics in the country put together,’” Martinez told Frommer’s over the phone, cracking himself up.

The restaurant and its 76-year-old namesake are both still going strong. Over the years, Martinez (pictured above in 1979 with then-and-now images of his restaurant's frozen margarita) has expanded his operation to several more establishments in the Dallas area, of which five remain.

The Mariano’s flagship (6300 Skillman St.) is now a crucial stop along the city’s Margarita Mile, a collection of 15 bars and restaurants serving superlative variations on the beloved cocktail. (Download the official app for recipes, a margarita-locating map, drink specials, and giveaways, including a free trip to Dallas for the winner of a sweepstakes in honor of the 50th anniversary.)

It’s no exaggeration to say that Mariano’s is at the root of this margarita-industrial complex—not just in Dallas but also anywhere the pleasures of slushified tequila, lime juice, Cointreau, and simple syrup are enjoyed (which is to say, everywhere).

No less an authority than the Smithsonian Institution agrees, having acquired the original frozen margarita machine for Washington, D.C.'s National Museum of American History in 2005.

“It’s right there next to Julia Child’s kitchen,” Martinez points out. 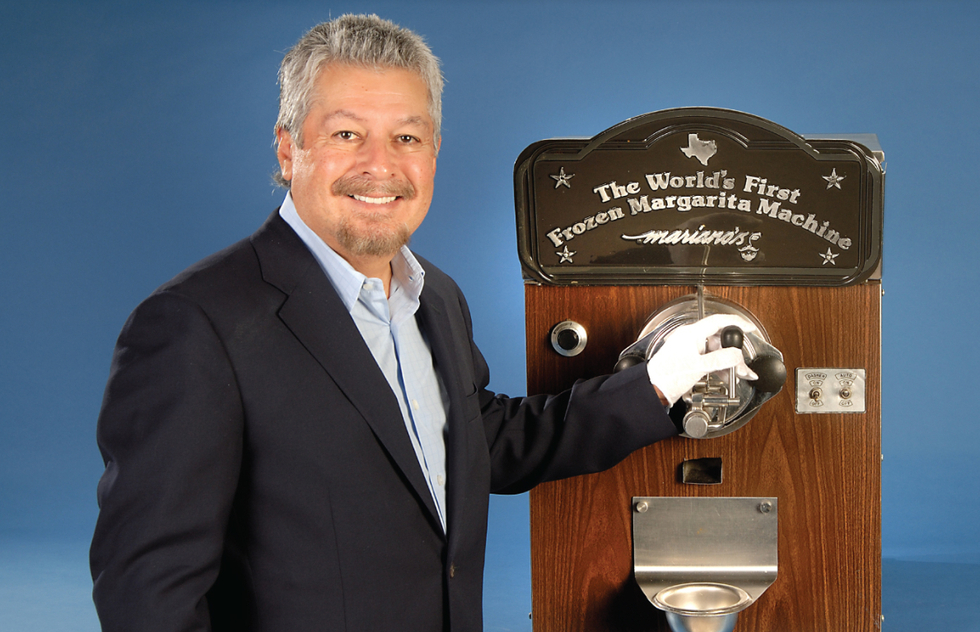 (2008 photo of Mariano Martinez and the frozen margarita machine he invented; photo by Richard Strauss/Smithsonian Institution)

A 2018 Smithsonian magazine article asserts that by “adapting mass-production methods to blender drinks, Martinez elevated the frozen margarita from a border-cantina curiosity to America’s most popular cocktail. The innovation forever changed the Tex-Mex restaurant business (placing bars front and center) and triggered the craze for Tex-Mex food.”

Back in May 1971, Mariano’s had only been in business a few months when necessity played midwife to Martinez’s invention.

The concept for the restaurant, he says, was an “elevated Mexican dining experience” with waiters in bowties, live music, “multicolored shag carpets,” the whole period-perfect thing. (A moment of silence, please, for the employees who had to clean salsa from that shag rug.)

The recipes for the food and beverages came in part from the ambitious young owner’s Mexican-American family. Those concoctions included the margaritas, derived from a secret formula developed by Martinez’s father when he worked at the famous St. Anthony hotel in San Antonio.

The only problem was that the drink was so popular at Mariano’s that the bartenders couldn’t keep up, and customers began complaining about lukewarm, inconsistent cocktails.

“The bartender threatened to quit,” Martinez says. “His hands were all pruned up from squeezing limes. He had given up measuring the tequila. They were just slopping the booze in there. We were wearing out blenders as fast as we could put them in there. They were overwhelmed.”

One morning after a particularly chaotic dinner rush, Martinez was getting coffee at 7-Eleven when inspiration struck in the form of a Slurpee machine.

“I thought if we made margaritas in a 5-gallon container before the shift started,” he says, “and put them in a Slurpee machine, it would just be like pulling a beer. The margaritas will always come out frozen and consistent.”

When Martinez called up 7-Eleven’s parent corporation, though, he was told that the company was not keen on letting him use a proprietary product for non-Slurpee-related purposes, and, besides, everybody knows alcohol doesn’t freeze.

Undaunted, Martinez was able to get his hands instead on a decommissioned soft-serve ice cream machine, which he modified to suit a challenging set of ingredients. The motor needed to work harder without overheating or making the contents too cold. Early attempts came out watery or frozen solid, but Martinez kept tinkering until achieving the right balance.

“I’m from the generation of teenagers who took stock cars and souped them up so they’d run faster,” he explains today. “So I got a guy who knew motors and I said, ‘Let’s soup up this machine.’”

The other key to getting a frozen margarita, according to Martinez, was using enough simple syrup. “What I learned later,” he says, “was that if you look with a microscope at a frozen margarita that comes out of the machine, the tequila never does freeze. The simple syrup creates an encapsulation around it, like an Advil gel cap.”

The important thing was that the machine worked and the drinks were an overnight success. “People were just sucking ‘em down,” Martinez says.

After catching on in Dallas, frozen margaritas quickly migrated to other parts of the country and beyond, helped along by a growing taste for Tex-Mex fare and the addition of frozen margaritas to the menus of big chain restaurants like TGI Fridays and Chili’s (another Dallas creation, by the way).

The popularity of the drink and the way machines do indeed make a bartender’s life easier eventually helped the frozen margarita establish permanent residence in businesses that don’t even serve Mexican or Tex-Mex food.

And the margarita in its frozen form undoubtedly led to the explosion of interest in tequila, which has gone, over the last five decades, from a niche regional spirit to a multibillion-dollar industry encompassing huge companies, craft cocktail aficionados, and even George Clooney and other celebrities who own brands.

Several years after putting his invention to work in Texas, Martinez recalls, he was in a New York City bar where a staffer was bragging about the joint’s unique frozen margarita machine. “My wife said, ‘Yeah, my husband invented that,’” Martinez says. “They looked at her like she’d just said, ‘My husband invented fog.’”

Which raises the obvious question: Did Martinez ever get a patent?

“The answer is no,” he replies without any discernible regret. “It never occurred to me to get a patent. The way I looked at it, I took a machine that already existed and I just repurposed it.”

Martinez is similarly modest—and a little taken aback—by the immense gratitude he receives from the frosty drink's many fans. “When people meet me,” he says, “and they find out I invented the frozen margarita machine, they always put their hands together like they’re gonna pray, and they bow like, thank you, thank you.” You can hear the mild astonishment in his voice. 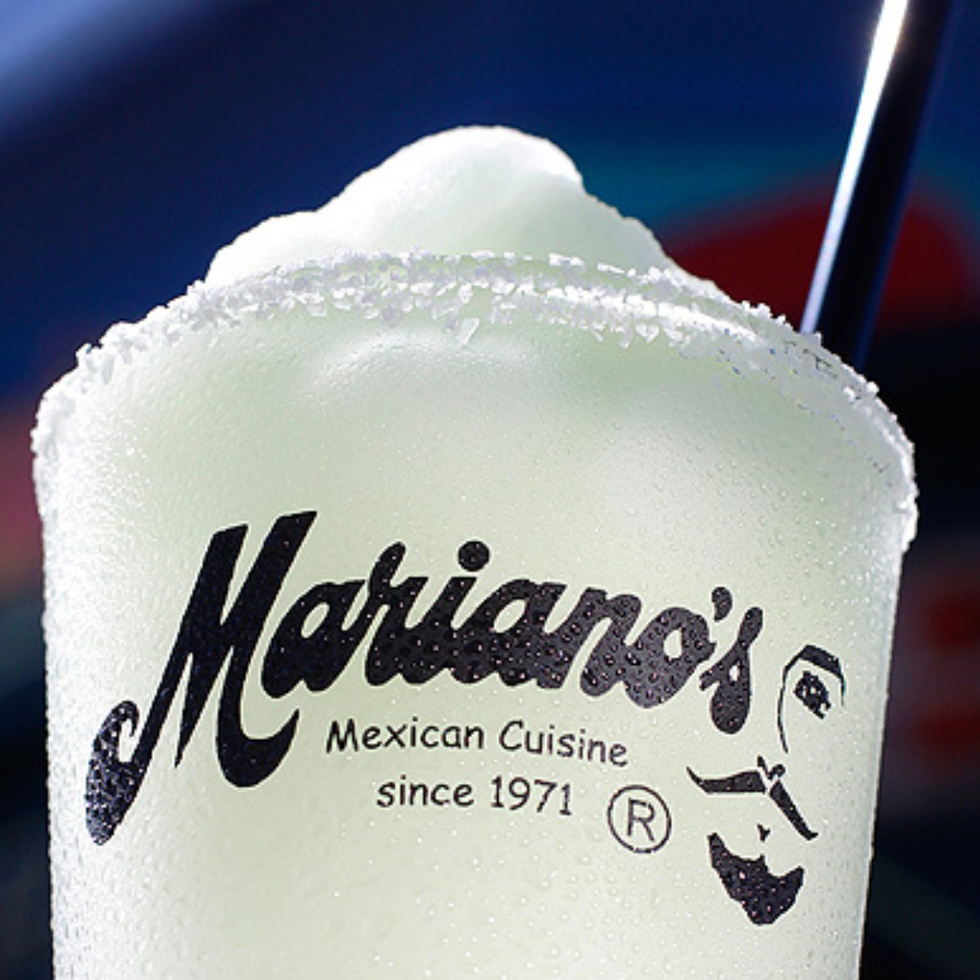 For the frozen drink’s big 5-0, Mariano’s is hosting a weeklong Margarita Fest leading up to the anniversary on May 11. There will be prizes, special events, and half-price frozen margaritas.

But even if you can’t make it to that event, Mariano’s deserves to be a pilgrimage site for the growing number of travelers interested in tequila tourism.

After all, Dallas has arguably done more proselytizing for that spirit than any other place north of the Mexican border.

“Many years ago, the mayor of Dallas made a proclamation that likened the frozen margarita to the Hurricane in New Orleans and the Manhattan [cocktail] in New York,” Martinez told us. “That’s our claim to fame.”

For more information about Mariano's, visit the restaurant's website.

To download the Margarita Mile app and enter the 50th-anniversary sweepstakes for a chance to win a trip to Dallas, go to VisitDallas.com.