Thank you for subscribing!
Got it! Thank you!
Home›Trip Ideas›Outdoor & Adventure›Glow in the Dark! Dazzling Bioluminescent Attractions—and How to See Them 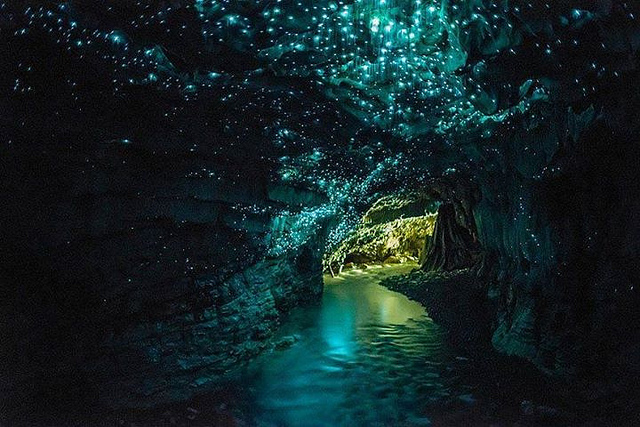 Glow in the Dark! Dazzling Bioluminescent Attractions—and How to See Them

Glowworms, fireflies, and marine life put on magical light shows in these lagoons, caves, and forests in the U.S., Caribbean, and beyond.

If you want to add a dose of surreal whimsy to your next vacation, bioluminescent phenomena should do the trick. We’re talking cavern walls lit by glowworms. An ocean of dolphins outlined in neon blue. A hardwood forest brimming with fireflies blinking in sync.

Scientists are still studying the ins and outs of these natural displays, but experts say some luminous critters emit light to attract prey or mates, while others may turn on the beams to communicate with one another or bewilder foes. Regardless of what sparks the glittery show, prepare to be pleasantly overwhelmed.

From Florida to New Zealand (home to Waitomo Glowworm Caves, pictured above), here are some of the best places to get your glow on. An unexpected bonus: Because it’s super tricky to capture bioluminescence on camera, there’s little choice for human viewers but to be fully in the moment. 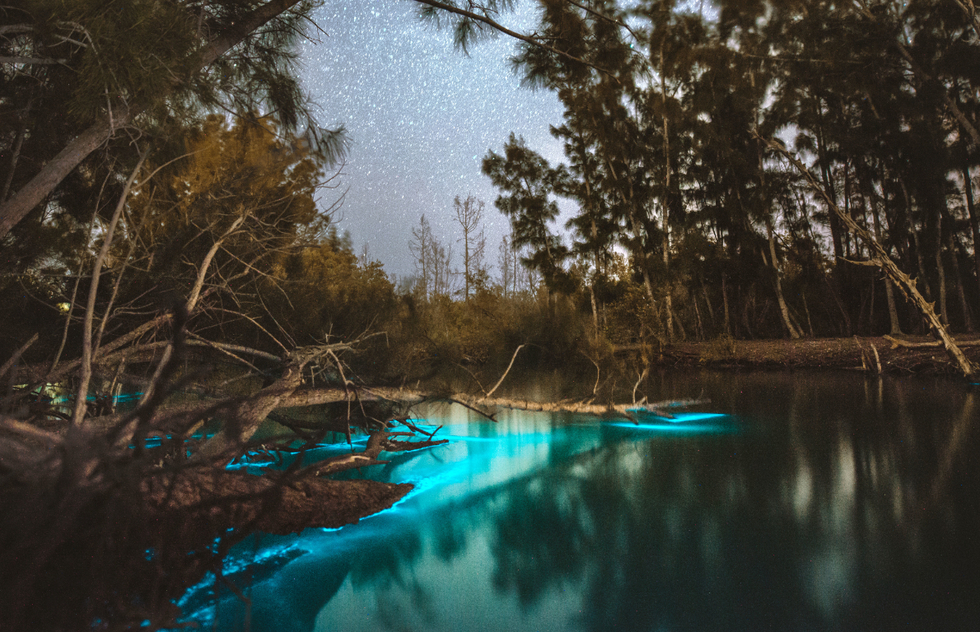 From June to October every year, the Merritt Island National Wildlife Refuge, located on Florida’s Atlantic coast about an hour’s drive east of Orlando, transforms into a scene straight out of Avatar. Dolphins glow neon blue. Ditto for manatees and manta rays. Even the overzealous mullet that occasionally flop into your kayak are bright blue. Dip your hands into the water to see vivid polka dots appear on your skin. Meanwhile, the world seems to have inverted and you are paddling through a liquid sky of streaking comets and shooting stars.

The unusual light show is all thanks to a large concentration of single-celled bioluminescent organisms that gather here every year. Get Up And Go Kayaking takes guests through the estuary in see-through kayaks. That means you won’t miss any of the glow-in-the-dark marine life darting right below you. 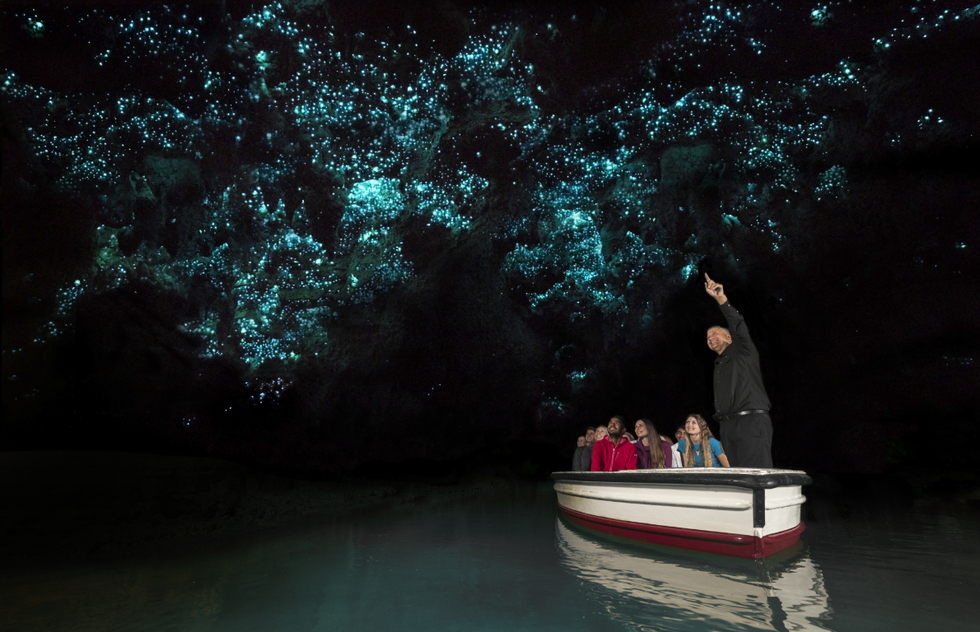 On New Zealand’s North Island, about 137 miles south of Auckland, an extensive network of caves has been attracting visitors for the past 130 years. The big draw: blue-green creatures hanging from the ceiling via long strings of mucus. As your boat glides through the grotto, past stalactites, waterfalls, and limestone formations, thousands of these carnivorous glowworms (aka arachnocampa luminosa) light the way.

For up-close views of the luminous larvae, sign up for a boat trip with outfitters like Discover Waitomo and Spellbound, both of which lead trips year-round. As an added treat, many local guides share stories about Maori culture. 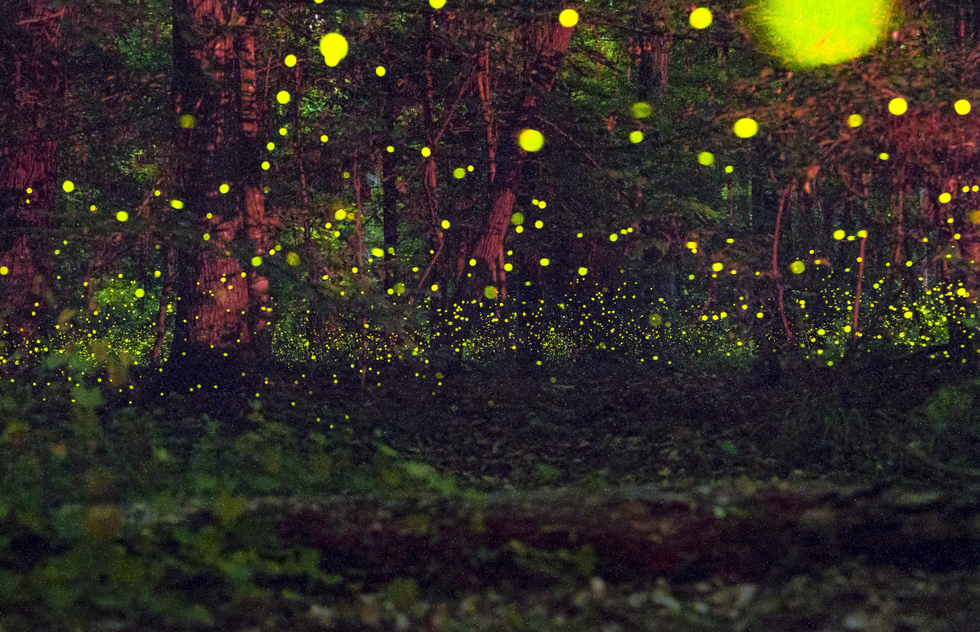 And you thought chasing fireflies as a kid was fun. Watching fireflies light up simultaneously by the hundreds while inside a national park is exponentially better. During a two-week window in mid-May or early June each year, synchronous fireflies flock to Congaree National Park in central South Carolina about 18 miles southeast of Columbia. As part of their mating season, the insects, known as snappy syncs (photuris frontalis), put on the dazzling, psychedelic spectacle.

How the fireflies flash in unison still remains a mystery. But one thing is certain: It’s nothing short of amazing. Plan ahead—if you’re lucky, you can score tickets through the lottery system at Recreation.gov. Only 120 vehicles are allowed in each night.

If you miss your chance in South Carolina, maybe try looking northwestward to Tennessee. Fireflies coordinate flashing for a brief spell each spring at Great Smoky Mountains National Park, too. 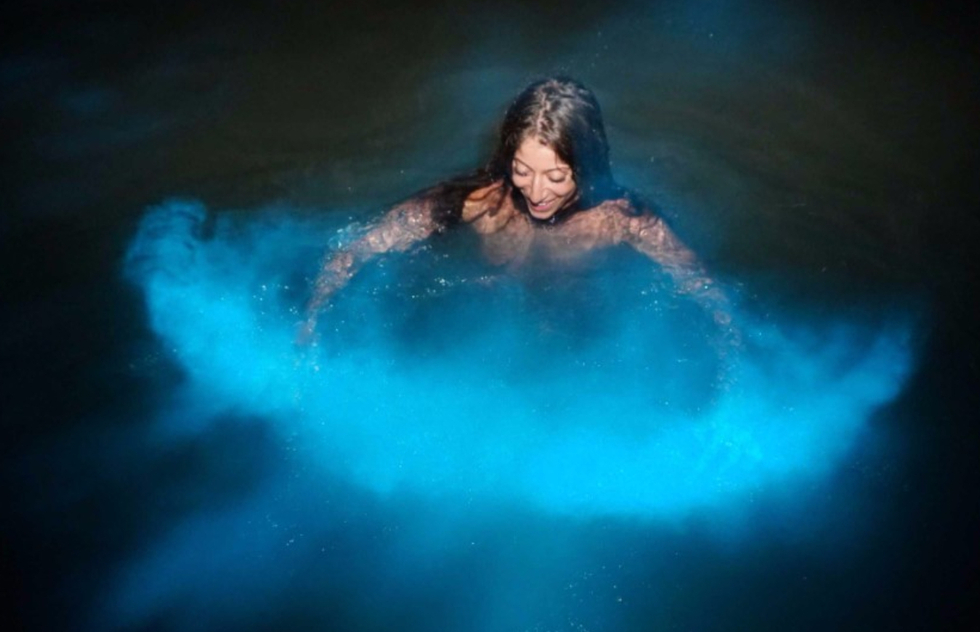 Among the marshlands of Trelawny on Jamaica’s north coast is a magical spot called Luminous Lagoon, which certainly lives up to its name. During the day, you can sit in the shade of a red mangrove tree, sip rum, and listen to reggae. By night, take a boat ride with tour operators Island Routes or Glistening Waters for a close-up look at the greenish blue glow of dinoflagellates.

The combo of saltwater and freshwater plus the shallow conditions make it an ideal habitat for these mircroorganisms year-round. You can even jump in and swim around.

Talk about precise timing! The mating ritual of Bermuda fireworms begins on the 3rd night after the full Moon in summer & fall, at 55 min post sunset, as females arise from the seafloor & secrete a bright blue-green luminescence that attracts males. More: https://t.co/JX8LyxhVJN pic.twitter.com/Zwlj8d8z4M

In 1492, Christopher Columbus made a note in his diary about witnessing something in the dark waters of the Atlantic that looked “like the light of a wax candle moving up and down.” It’s possible he was seeing the bioluminescent mating ritual of fireworms near Bermuda. Good news: The frisky invertebrates are still at it to this day.

If you visit Bermuda’s north shore between May and November after a full moon, you may spot what looks like fireworks on the ocean’s surface. You’re one letter off. Those are fireworms. Females of the species produce a bioluminescent slime that males find pretty irresistible. They leave the seafloor and head to the surface in mesmerizing blue-green circles.

For a better look, take a glowworm cruise from Ana Luna Adventures. 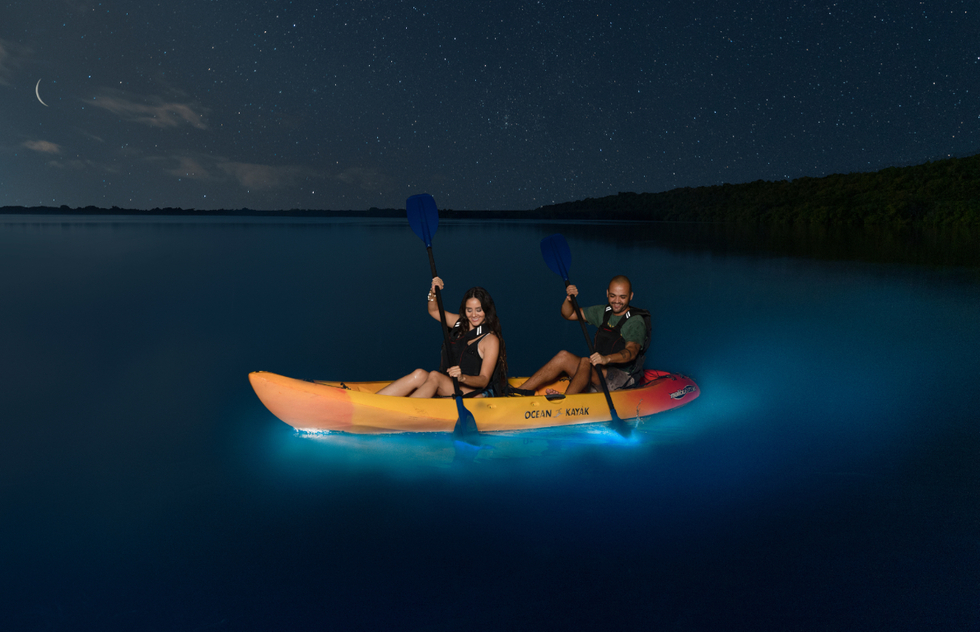 Puerto Rico is lucky enough to have three bioluminescent bays: Laguna Grande in the eastern town of Fajardo; La Parguera in the southwest; and—the brightest—Mosquito Bay on Vieques, the tiny isle off the main island’s eastern tip.

Located on the southern shore of Vieques, the bay’s rich blue hue comes from a species of resident phytoplankton that shines whenever agitated. Up to 160,000 of these microscopic dinoflagellates in each liter of water makes for a lot of agitated shining—and a lot of swoon-worthy nighttime scenery. Book an excursion with Jak Water Sports or Black Beard Sports, both of which operate on Vieques year-round, to be dazzled in person.