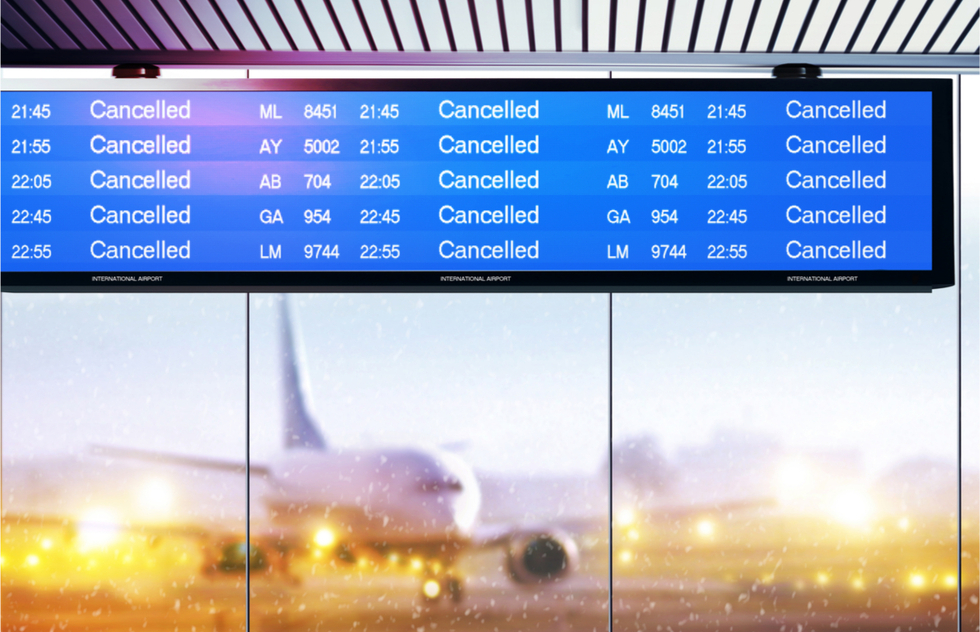 UPDATE, September 6: This post, originally published September 3, has been updated below.

As we reach the end of a summer travel season plagued with flight delays and cancellations, airlines and the federal government are at last doing more to keep passengers better informed about what they're owed when their planes don't leave on time—or at all.

Just in time for the busy Labor Day weekend, the U.S. Department of Transportation has created a new customer service dashboard to provide travelers with easy-to-access info about the forms of compensation and other complimentary services that major U.S. carriers provide customers as a result of delays and cancellations within the airline's control.

In a comparative table, the dashboard lists 10 services and amenities airlines may provide for "controllable" cancellations and delays, including free rebooking of flights on the same or another airline, meal vouchers for delays of 3 hours or more, and hotel accommodations for overnight delays. Under columns labeled with the names of 10 U.S. carriers, green check marks and red X's indicate which airlines will do what for stranded customers.

The Transportation Department recommends consulting the chart in the immediate aftermath of a cancellation or delay, or using the info to shop around when you're deciding which airline to fly with.

The dashboard shows, for instance, that Allegiant Air does jack squat for inconvenienced passengers, while American, Delta, JetBlue, and United get green checks in every category.

There are of course nuances that can't be conveyed in a single chart. American, for instance, only rebooks stranded passengers on its own flights or those of partner airlines (domestically, those include Alaska Airlines, Hawaiian Airlines, and JetBlue). Rivals such as United and Delta, on the other hand, will rebook stranded customers on any available airline at no additional cost, which gives their passengers a lot more options. When you're shopping around for airlines, you might want to consult the carriers' customer service plans, which are linked at the bottom of the Transportation Department's dashboard, for the full story.

Keep in mind also that we're only talking about delays and cancellations caused by the airline. Examples may include problems caused by understaffing (a big headache this summer), maintenance issues, and delays for cabin cleaning, baggage loading, or fueling.

Because bad weather is beyond an airline's immediate control, flights that don't take off for that reason don't come with the same guarantees—though airlines may have mercy on you at their discretion. Ask politely.

The exception is your entitlement to a refund. Airlines are required by law to give your money back for a canceled or significantly delayed flight, no matter the reason for the delay or cancellation.

The compensations listed in the Transportation Department's dashboard aren't necessarily new, but U.S. flyers haven't previously had a government resource showing them all in one place what they're entitled to according to the airlines' own customer service plans.

As the Associated Press points out, the dashboard is part of an extended pressure campaign that Transportation Secretary Pete Buttigieg has been waging against airlines, urging them to improve service and transparency amid this year's resurgence of travel after pandemic lockdowns.

It looks like some of that pressure is getting results.

Earlier this week, several carriers, including the four largest by market share—American, Delta, Southwest, and United—told the Transportation Department, in response to Buttigieg's prompting, that they've updated customer service plans to be clearer with regard to controllable cancellations and delays, and that the carriers are committed to providing meal vouchers after 3 hours and hotel stays for overnight delays.

Buttigieg has previously warned airline executives that the dashboard may not be his only solution to the problem.

"We are also contemplating options for rulemaking," he wrote in an August 18 letter to U.S. carriers, "that would further expand the rights of airline passengers who experience disruptions."

UPDATE, September 6: According to consumer advocates, what's needed most urgently is a "passenger bill of rights" for airline customers.

"Our concern is that the DOT's new dashboard is a pretty ribbon on the same old tired policies," said William J. McGee, the American Economic Liberties Project's senior fellow for aviation, in a statement sent to Frommer's.

"A few airlines may have tweaked their Contracts of Carriage this week to appear more consumer friendly," McGee said. "Unfortunately, we've seen this time and again, that these contracts are written by and for the airlines and they can be amended—for good or for bad—at any time without notice. Passengers have no assurances that what the airlines say this week will still be in effect next month. That's why American Economic Liberties Project has been urging Secretary Buttigieg and Congress to enact real and meaningful protections that are mandatory, consistent, and easy to comprehend. Such Passenger Bills of Rights already work very well in the European Union and Canada, and this summer of flight debacles has shown we desperately need such rules in the U.S."