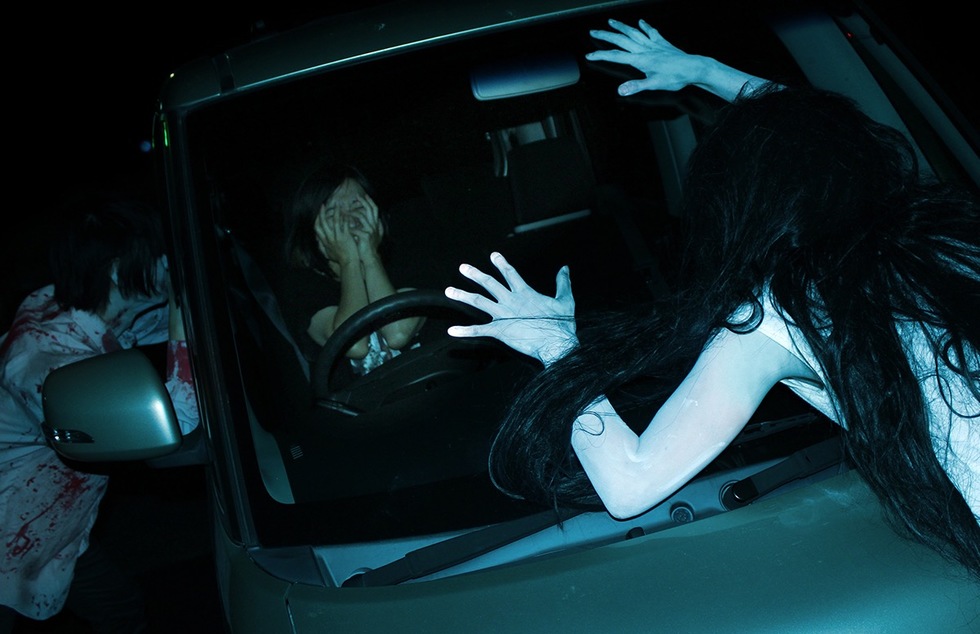 Ghouls of the Road: Drive-Through Haunts Are a Frightful Halloween Trend

Given the still-raging pandemic and the looming U.S. presidential election, there's plenty to fear this fall, even with the cancellation of haunted houses and other Halloween attractions (such as the spooky festivities at Universal and Disney theme parks) due to social distancing concerns.

But if you still crave manufactured scares, some horror mavens are soldiering on with new, drive-in and drive-through seasonal events designed to supply jolts, screams, and icky imagery that can be experienced from the safety of your own car—no getting breathed on by demons or pawed at with the unwashed hands of the undead.

Japan got the jump on the trend this summer—the season for ghost stories there—with a drive-in haunted house staged by a production company called Kowagarasetai in a parking garage in downtown Tokyo.

For an admission fee of ¥8,000 ($75)—or ¥9,000 ($85) if you don't have your own car and need to borrow a loaner provided by Kowagarasetai—visitors are given a Bluetooth speaker before the lights go out. Then for the next 17 minutes, zombies smear blood on the car windows and shake the vehicle while its occupants cower within.

After it's all over, cast members wipe the car down to remove fake blood—and the germs from their hands—presenting the amusing spectacle of zombies politely tidying up after a killing spree. 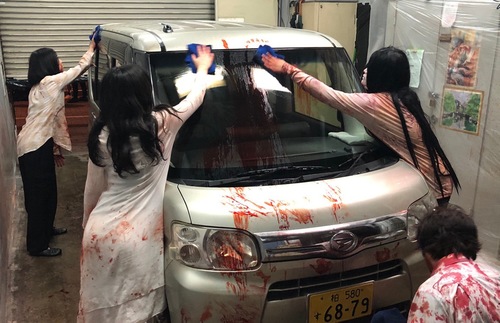 Following a successful run this summer, the drive-in haunted house has announced a remount for the autumn. Tickets are already sold out.

In Orlando, meanwhile, tickets (starting at $15 per person) go on sale this week for the Haunted Road, a new drive-through Halloween experience that aims to fill the vacuum left by the absence of the usual Universal and Disney events.

Set to take place on select evenings from September 25 through November 7 at the same address (15239 Lake Pickett Rd.) as Corn Maze Orlando, the Haunted Road will require cars to park at a series of scenes for a twisted take on the Rapunzel tale involving frightening creatures and visual effects. As at the Tokyo attraction, you'll watch the contactless show from the car—though this time, ghouls won't get schmutz on the paint job.

Normally intended for visitors age 13 and older, there will be a family-friendly daytime version, too. Tickets, which must be purchased in advance, go on sale Wednesday, August 19, at midnight.

On the other side of the country, California's drive-through scary spots include Urban Legends of Southern California at the O.C. Fair & Event Center in Costa Mesa (October 1–November 1; tickets start at $50 per vehicle) and, at the Alameda County Fairgrounds in Pleasanton near San Francisco, Pirates of Emerson, a self-driven cruise through a haunted theme park (October 2–November 1; tickets are $95 per vehicle).

Though attendees must stay in their cars the whole time, rolling down windows is permitted, provided passengers wear masks (coronavirus masks, not the mask from your Hulk costume).

Dates haven't been announced yet, but the show is expected to make its spine-tingling Vegas debut in October.