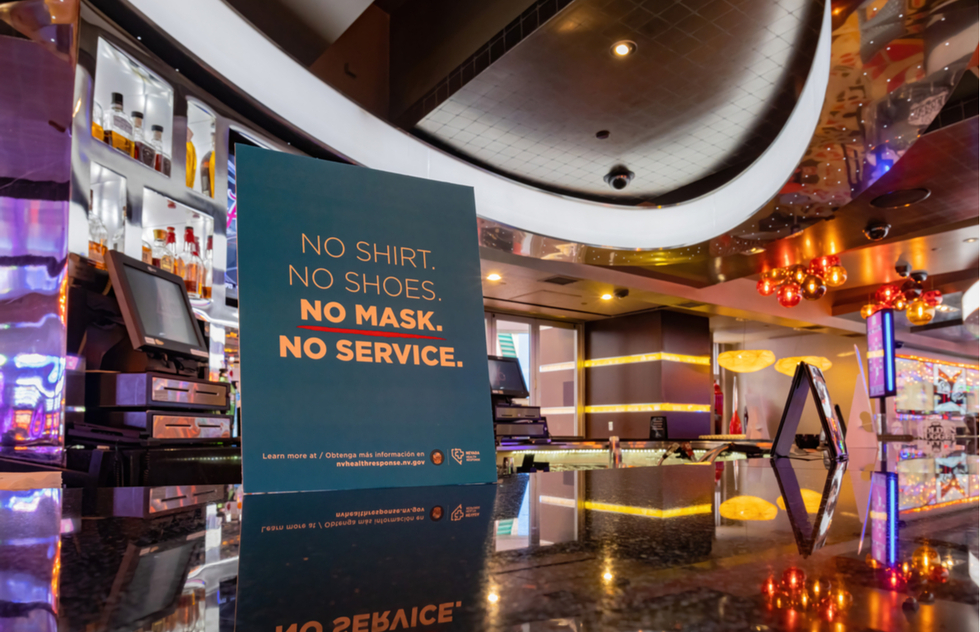 Thanks to the pandemic, visitation numbers in Nevada have dropped to their lowest levels in almost 30 years, according to the Reno Gazette-Journal.

It's no wonder that Las Vegas politicians, casino owners, and other people dependent on the tourism economy are eager to accelerate the city's return to some semblance of normal, even with restrictions such as mask requirements and capacity limits remaining in place (a mask-up sign posted inside the Golden Nugget on Fremont Street is pictured above).

With Covid-19 vaccinations continuing and new infections dropping at the moment, Nevada Gov. Steve Sisolak will ease health and safety restrictions significantly in March—and on the Vegas Strip and elsewhere in town, casinos are bringing back smaller shows, reopening temporarily shuttered offerings, and introducing new features altogether in an effort to lure visitors.

Capacity on casino floors and inside bars and restaurants is currently limited at 35% of full occupancy—up from a 25% cap set in November. But according to the state's "Roadmap to Recovery" issued this month, the limit will rise to 50% on March 15.

Banking on a potential increase in demand, MGM Resorts announced last week that three of its properties—Mandalay Bay, Park MGM, and the Mirage—will resume 24/7 hotel and casino operations starting March 3. Previously, those resorts had adopted mid-week closures in response to "decreased business volumes due to Covid-19," as a company statement puts it.

That means all of MGM's Vegas properties, which also include Aria, Bellagio, Excalibur, Luxor, MGM Grand, New York-New York, and others, will be open around the clock again.

Rival Caesars Entertainment retains a weekends-only operating schedule for three of its resorts: The Linq, Planet Hollywood, and Rio.

Entertainment options in Vegas remain limited compared to the pre-pandemic smorgasbord, but stand-ups, magicians, and athletes are starting to do their respective thing in front of small audiences again.

Current rules limiting shows to 100 people or 35% of venue capacity (whichever is less) will rise to 250 people or 50% of capacity on March 15, according to the state's reopening plan.

That has set the (literal) stage for the return of comedy shows this month and, coming soon, higher-profile engagements such as Vegas mainstay David Copperfield at the MGM Grand, starting March 21.

The city's NHL hockey team, the Vegas Golden Knights, has reportedly submitted a crowd plan for readmitting spectators for games at T-Mobile Arena, albeit at 20% capacity.

Outdoor "dayclubs" in pool areas at the MGM Grand, Caesars Palace, and Aria are slated to make a splash as the weather warms in March, and capacity limits on outdoor dining will be lifted—although the resorts promise to enforce social distancing and mask-wearing except when revelers are eating or drinking.

And toward the end of the month (March 25), Virgin Hotels plans to debut in the revamped digs of the former Hard Rock Hotel.

"I'm hoping by end of spring, as we go into June, we'll see yet another significant rollback as we get ready for events," he told reporters in an earnings call.

But that will depend, in turn, on whether our luck holds out when it comes to falling infection rates, emerging variants, and the vaccine rollout.