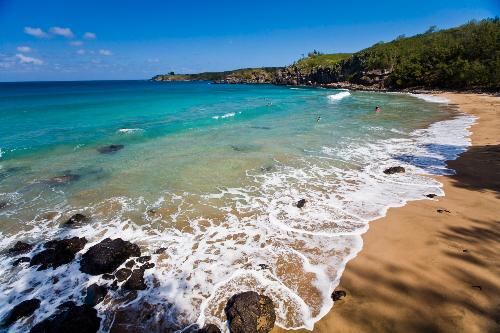 Perhaps no American state's economy has been devastated by Covid-19 worse than Hawaii's.

The state's isolation determines so much about its health. Nearly all tourists arrive to the islands by air. Unlike places in the contiguous U.S., Hawaii can't easily transfer patients to neighboring states if the hospitals fill up. That why Hawaii was so aggressive about dealing with Covid-19 in March, closing down to stop the spread of the disease.

But the state is also reliant on tourism—about 21% of the economy depends on it. Grounding air travel has had a far more severe impact on the Aloha State than mainland destinations that can be reached by driving.

The coronavirus pandemic isn't over, but Hawaii is charting a new course for its economic health. An outright travel ban is no longer feasible, but neither is simply opening the gates to anyone who wants to come.

Gov. David Ige has announced a new method of screening visitors that he hopes will give Hawaii's tourism industry an infusion of economic activity without flooding the state with infections.

The state is still working out details to explain how tourists will know whether their tests meet the guidelines. At the moment, the Hawaii Tourism Authority's announcement page says travelers must take "an FDA-approved nucleic acid amplification test (NAAT), performed using a nasal swab" and "show proof of negative test results from a CLIA certified laboratory." Tourists must present the result at the airport before their flight takes off for the Aloha State.

Hawaii News Now reports the state has contracted with the CVS pharmacy chain and the Kaiser Permanente insurance group to provide travelers with tests at their own expense.

Tests will not be offered at Hawaii's airports; would-be visitors will have to take it upon themselves to obtain tests just before departure.

Visitors who are still awaiting test results when they land—a common problem in the United States, where timely results have not been a government priority—will be required to quarantine until those results arrive.

Any visitor who cannot furnish a negative result will be required to quarantine for 14 days—and in Hawaii that mandate is strictly enforced due to precarious hospital capacity issues. The state employs health workers who check up on isolated visitors, and there have been multiple cases of tourists who broke isolation rules and were arrested and shipped home for slipping away to the beach.

Here's a flow chart issued by the state to explain the new system. You gotta love the on-brand use of the shaka hand gesture to signify good news. 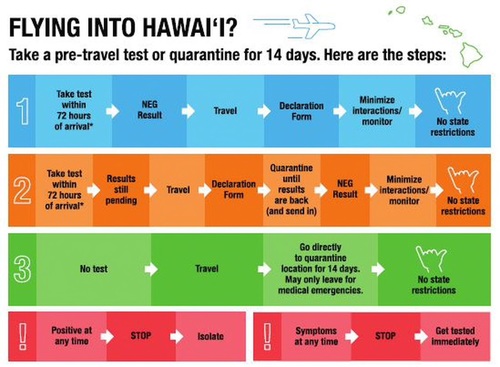 It will take time to develop this system to the point where Hawaii's tourism industry approaches anything resembling normal. For example, inter-island travel is still restricted, so visitors will, for the time being, be permitted to visit only one island per trip.

However, the governor has officially given the green light to "resort bubbles" on the island of Kauai, which would allow tourists to spend their quarantine on the grounds of a hotel rather than remain in lockdown in their rooms.

Hawaii had originally hoped to put this program in place on August 1, but relented when there were outbreaks both on the mainland and on the island of Oahu. Hopefully—for the sake of Hawaiians' livelihoods—the new October 15 opening date will stick.

We think it's an exciting development, and we fervently hope the plan works. Similar systems could be the key to reopening travel worldwide.

Since the early days of the pandemic, Frommer's has strongly asserted that the only safe way forward for travel will be through reliable testing. The news that the state government of Hawaii is working with both a major pharmacy and a health insurance group is a positive sign that authorities are at last devising real-world solutions that will enable Americans to know their status and—let's hope—begin traveling again at no risk to themselves or others.