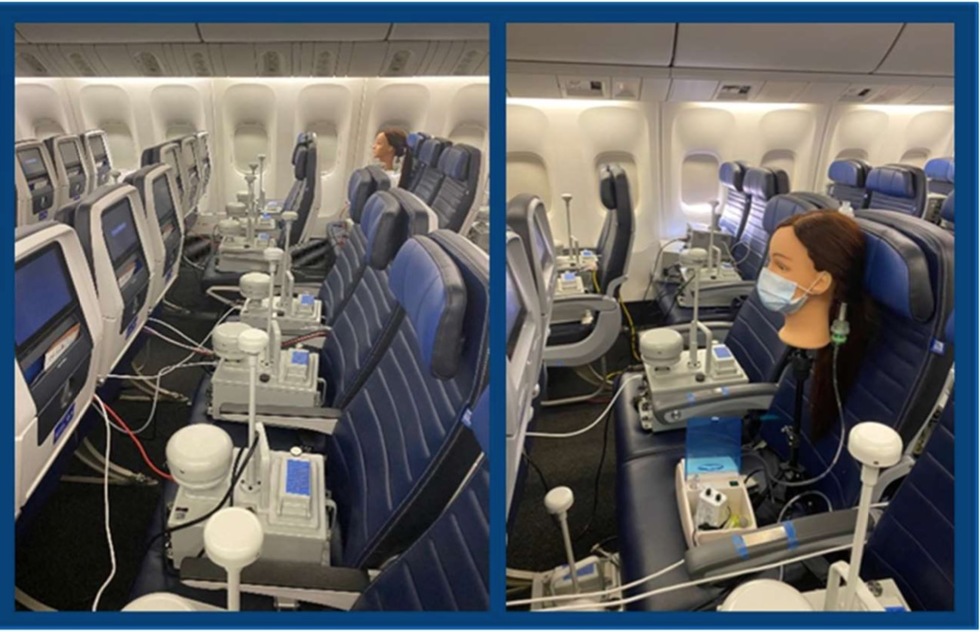 Is This The Strongest Proof Yet Flying Is Safe? See These New Military-Grade Tests

If you ran an airline in 2020, how would you prove to the public that flying in your planes is safe?

It's a tricky proposition in an age of document dumps, disinformation, and fake news. To reassure consumers, the airlines need to show that they're safe to use, but any study they produce on their own could be dismissed as self-serving, questionable, or overly anecdotal.

So here's what United Airlines has done: It cooperated with military-grade safety tests conducted by the Department of Defense, which wanted to know if it's safe to transport troops using commercial aircraft.

Researchers at the federal Defense Advanced Research Projects Agency (DARPA), along with biodefense company Zeteo Tech—with the participation of United, the U.S. Air Force, and Boeing—have just released findings from more than 300 air tests carried out in airplanes over six months, including 38 hours in flight and 45 hours on the ground.

Basically, the research worked like this: In airplane cabins set aside for the study, special mannequins were programmed to eject 180 million fluorescent tracer particles per test, which United says is the equivalent of "thousands of coughs"—in other words, on the extreme high end of real-world possibility. The particles spewed by the dummies were sized to approximate, as closely as possible, a typical viral particle of Covid-19.

Then researchers then used specialized biodefense sensors to detect if and where those particles landed around the cabin. Some sensors were placed in the open, and some were behind masks. The evaluators also tested what would happen if particles were released in the cockpit or on the ground while auxiliary power was in use, as it might be during the boarding process.

In a nutshell, as a United-produced Twitter video about the results trumpets: "When seated and wearing a mask, research showed on average .003% of infected particles crossed into your breathing zone." In flight, nearly 100% of the particles were filtered out of the air within six minutes.

The risk assessment that United is going with is that the danger is "almost non-existent on our flights (yes, even on a full flight)."

The results are in: Your risk of exposure to COVID-19 is almost non-existent on our flights (yes, even on a full flight).

Learn more about the robotic mannequins, biodefense sensors and the results of this @DeptofDefense study here: https://t.co/NkqsW8r16A pic.twitter.com/KRMCrpPfGX

Of course, United would love nothing more than to pack flights again, so it's no surprise the company would say that.

United is also directing would-be passengers to the full report so they can decide for themselves if the methodology passes muster and the airline's interpretation is accurate.

Some leaders in the government think so. Gen. Stephen Lyons, the head of U.S. Transportation Command, previewed the results at an annual meeting in early October. "I would tell you that in my observations, and I've flown commercially since the pandemic started, being on a commercial airplane with HEPA filtration is probably one of the safest places that you can be," Lyons said.

The study stresses that the results are only valid for aircraft outfitted with a working HEPA filtration system, which is the standard for all commercial passenger planes today. The results also confirmed that the biggest risk—small as it may be—comes from an infected person sitting in your row or in the one in front or behind you; if an infected mannequin was placed farther away than that, the HEPA air filtration system did the work and the risk result was deemed negliglble.

Results also noted that no practical difference in transmission was measured between aisle, window, and middle seats.

We note with regret that these Department of Defense tests, which can be applied to noncommercial flights as well, are a lot more than the Department of Transportation, under Sec. Elaine Chao, has done to ensure passengers are safe.

A PDF of the full report is online, and although it gets highly technical, we encourage you to have a look. It fills in a lot of the details that a news consumer should always request about an announcement like this, including how the study was conducted, which aircraft types were tested, and where the dummies and sensors were placed, according to seating charts that correspond to commercial flight deck plans.

There are bound to be slight gaps in any study like this. For example, researchers approximated SARS-CoV-2 (Covid-19) rather than using live samples. But the tests did attempt to make compensations, such as sizing the fake virus to closely match what's typically shed by an infected individual.

Some factors cannot be measured—whether noses and lungs in a pressurized cabin environment make for more or less hospitable hosts for the virus, for instance—but even so, this is the most rigorous and least anecdotal study that we've seen yet.

The results—paired with the fact that hospitals simply aren't reporting an onslaught of superspreader events traced back to airlines when mask rules are being followed—should go a long way toward easing travelers' minds about the safety of getting on a plane right now, especially if every passenger remains masked, as United Airlines continues to recommend and enforce.

But don't take our word for it. We love travel, too, and are eager for safe travel to resume. Look at the report for yourself and see how you feel.