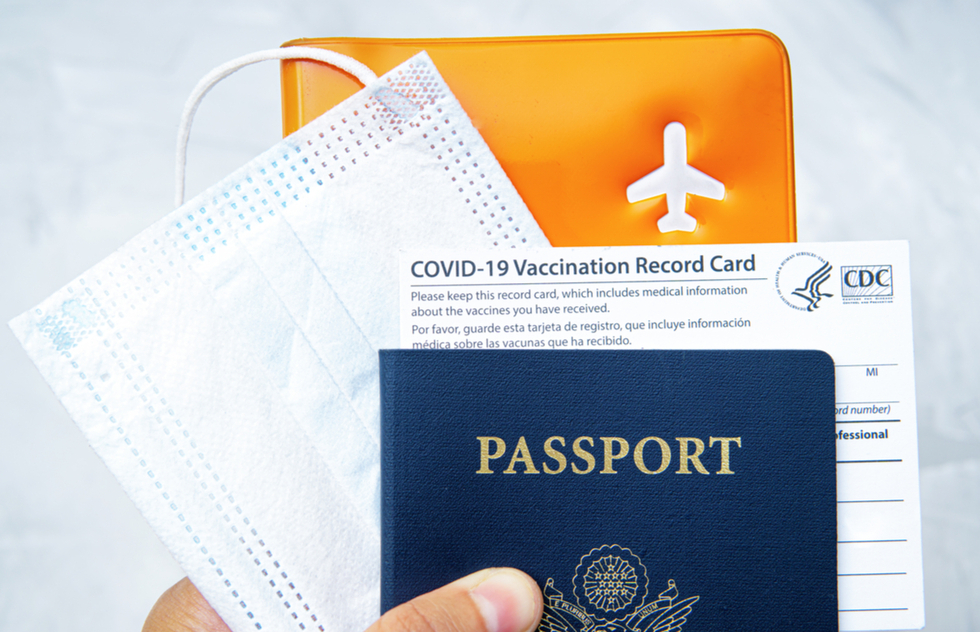 Why the U.S. Needs a Vaccine Requirement for Domestic Travel—and Is Unlikely to Get One

Should the United States require people who are traveling within the country to be fully vaccinated against Covid-19? Or, barring that, should passengers at least have to show that they recently tested negative for the virus?

Infectious disease and public health experts, at least 6 in 10 Americans (according to months of polling), and those of us who believe last winter's Covid surge was fueled by holiday travel and not [insert wild-eyed conspiracy theory here], would all say yes.

Vehemently opposed are airlines, many politicians and nihilistic media pundits, and those whose idea of personal freedom involves the right to spread serious viruses as the Founders intended.

To be fair, the airlines' opposition to a vaccine requirement for domestic travel has less to do with politics than with the fact that they don't wanna.

Though the majority of carriers now require their employees to be vaccinated, airline executives and trade associations such as the International Air Transport Association (IATA) argue that a similar mandate for domestic flyers would introduce too much "operational complexity" for the aviation industry to bear.

“It would mean that people would have to come to the airports earlier, it would mean longer lines, it would mean more people needed to perform these functions," warned JetBlue CEO Robin Hayes at IATA's annual meeting last week, "and we’re not sure at the moment if the system is ready for that."

What's more, the carriers say, studies—including one administered by the U.S. Department of Defense—have found that planes' circulation systems leave cabins with pristine air and make virus transmission unlikely if all the passengers on board wear their masks properly (which is an if about the size of a Boeing 777).

Needless to say, the airlines will not be backing the U.S. Air Travel Public Safety Act, a bill introduced late last month by California Sen. Dianne Feinstein. The legislation would require all passengers on domestic airline flights to either be fully vaccinated, have recently tested negative for Covid-19, or have recently recovered in full from the virus. (Virginia Rep. Don Beyer has introduced a similar bill that would apply to rail travel on Amtrak.)

Such a requirement would be less onerous than what the U.S. is asking of international visitors when inbound tourism resumes next month because those travelers will need to present proof of vaccination in addition to negative test results.

Feinstein is proposing an either/or situation for domestic flyers—if you're opposed to or ineligible for vaccination for some reason, you can take a test instead. That way, no person free of the virus would be barred from flights.

In a statement, Feinstein notes that the bill has the support of the Infectious Diseases Society of America and the American Public Health Association.

The statement also points to several scientific studies, including one that found a causal link between 2020 holiday travel and increased Covid-19 rates in destination communities, and another suggesting the meaningful impact that testing airline passengers can have on controlling active infections.

Both seem like no-duh conclusions, but we can't take common sense for granted nowadays.

To the airlines' belief that verifying vaccination status for domestic travel would be too complicated, proponents of the mandate counter, as one public health expert put it to the New York Times, "if small restaurants in New York City [where being vaxxed is necessary to enter many public places] can figure out how to check proof of vaccination without undermining the dining experience, then certainly the airline industry can work something out."

Granted, air travel would require a verification process a bit more involved than the millisecond a restaurant hostess spends looking at your paper CDC card.

Since political conniptions over "vaccine passports" have blocked any sort of national, government-run system in the U.S. for verifying vaccine status with a digital QR code as in the European Union and elsewhere, implementing a vaccine requirement for domestic travel wouldn't be as easy in the U.S.

In Canada, a vaccine requirement for domestic travel, including flights, goes into effect October 30, but in that country, digital Covid health passes are issued on the provincial level, so getting onto planes and trains will simply be a matter of scanning passengers' smartphones.

The lack of a unified digital system on the other side of the border would present hurdles for airlines and airports initially, but there are non-governmental solutions that include Clear and CommonPass, both of which are already being used successfully on some airline routes operated by United, JetBlue, Lufthansa, and others.

As for airlines' claims about the safety of the air in plane cabins? In-flight air quality isn't the only concern—there's also the potential for unvaccinated and untested passengers distributing the virus once they get to wherever they're headed.

Without any sort of requirement for vaccination or testing, the millions of Americans who pass through crowded airports to board crowded planes this holiday season will have zero assurance that they're not surrounded by infected travelers and the only protection will be the masks that a significant percentage of passengers refuse to wear properly.

With aviation businesses not likely to take steps to make the movement of travelers via domestic flights safer, the task falls to government—but don't expect much help there, either.

The White House has been reluctant to embrace a vaccine mandate for domestic travel, and Anthony Fauci, President Biden's chief medical advisor, said in a TV interview on Sunday that implementing the requirement seems unlikely.

“It’s always discussable," he said, "we always wind up discussing it, but right now I don’t see that immediately.”