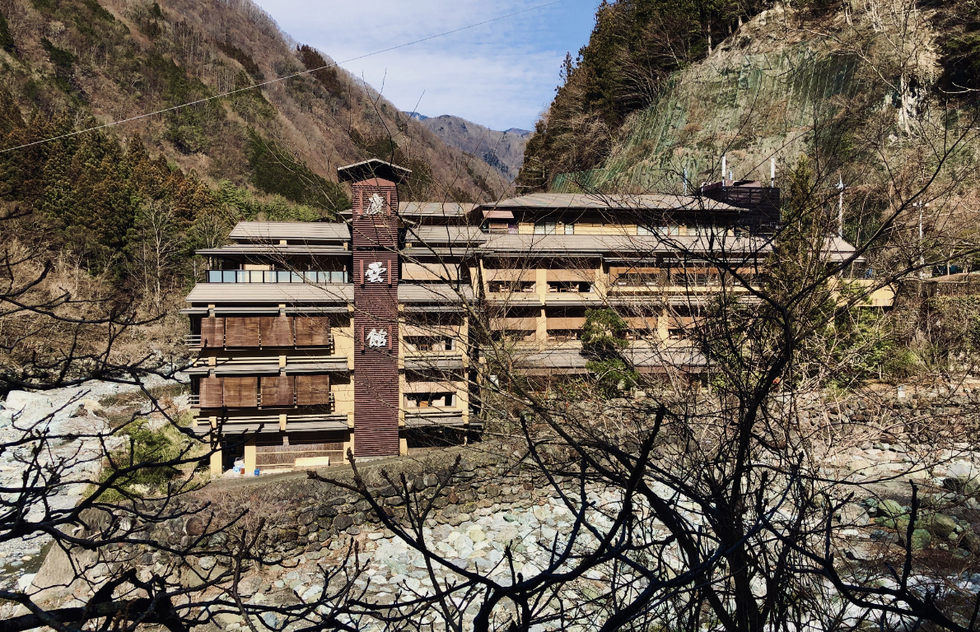 Find the Oldest Hotel in Each Country with These Illustrated Maps

The planet's oldest hotel, according to Guinness World Records, is a Japanese onsen (hot-spring hotel) that has been in operation since the year 705.

Emperors and samurai warriors are among the guests said to have soaked in the waters of Nishiyama Onsen Keiunkan (pictured above), located in Yamanashi Prefecture southwest of Tokyo.

Incredibly, 52 generations of the same family have been running the traditional inn for the last 1,300 years or so. That's a lot of bedding to change.

The venerable ryokan is by far the longest-lasting establishment on a fun new illustrated map that shows the oldest still-operating hotel in nearly every country on earth. 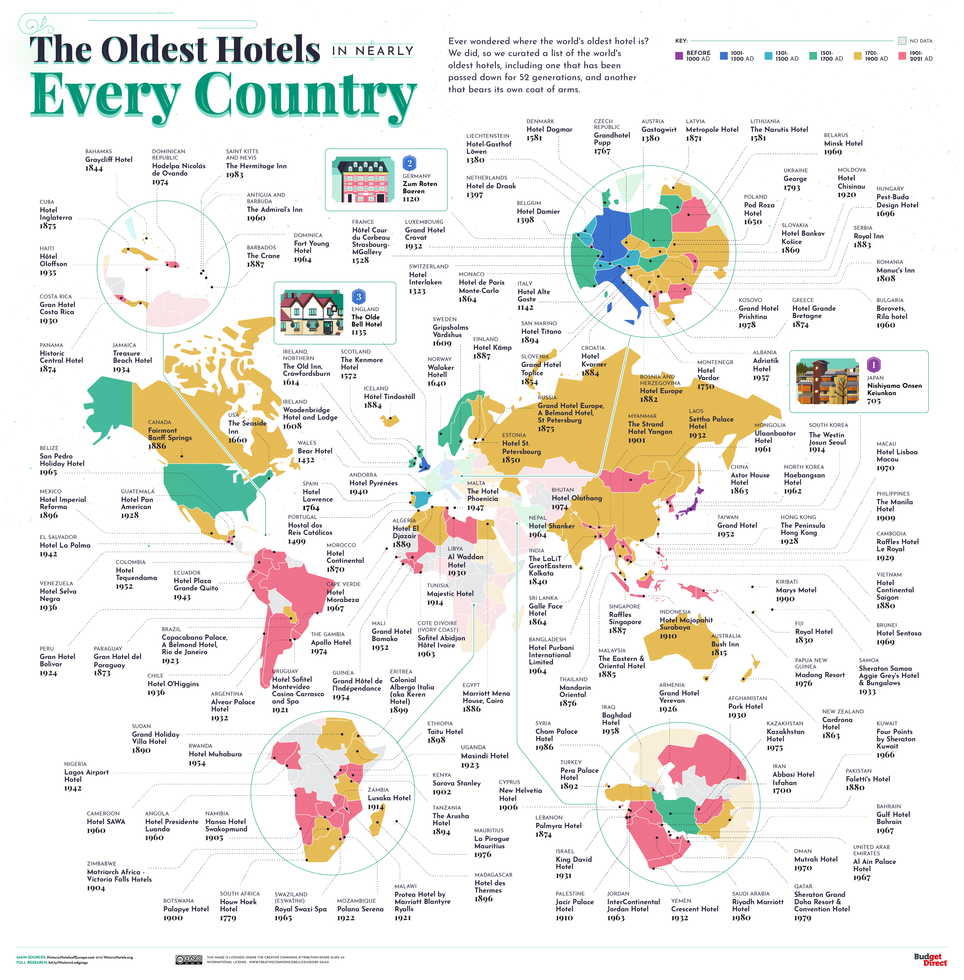 (Image: Budget Direct; click here for a version you can zoom in on)

Released by Australia-based insurer Budget Direct, the main graphic is posted on the company's website along with smaller maps that zoom in on specific regions. The 10 oldest hotels are highlighted with illustrations recalling vintage travel agency posters.

To make the maps, researchers relied on hotel origin stories found in historical sources and confirmed that each business remains in operation (though some have had continuity gaps).

Outside of Japan, only Europe has surviving hotels that predate the 1600s, according to the research. 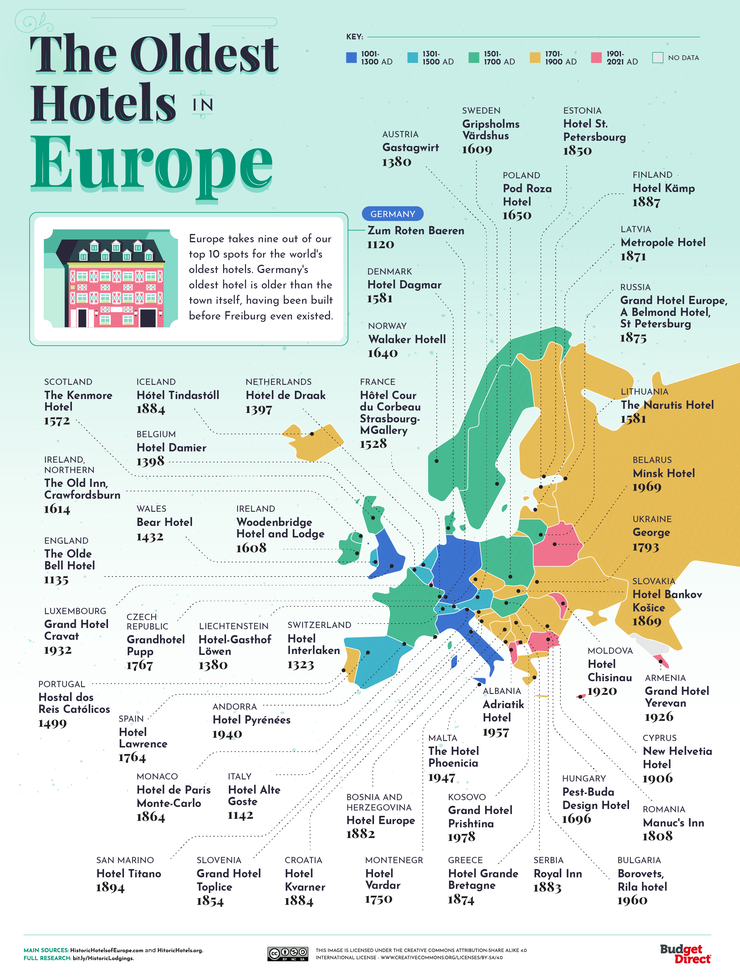 Europe's longevity champ is Zum Roten Baeren in Germany's Black Forest town of Freiburg im Breisgau. The foundations date back to 1120, before Freiburg was even founded, and although the structure was rebuilt in 1718, a pillar in the basement has been standing for a millennium. 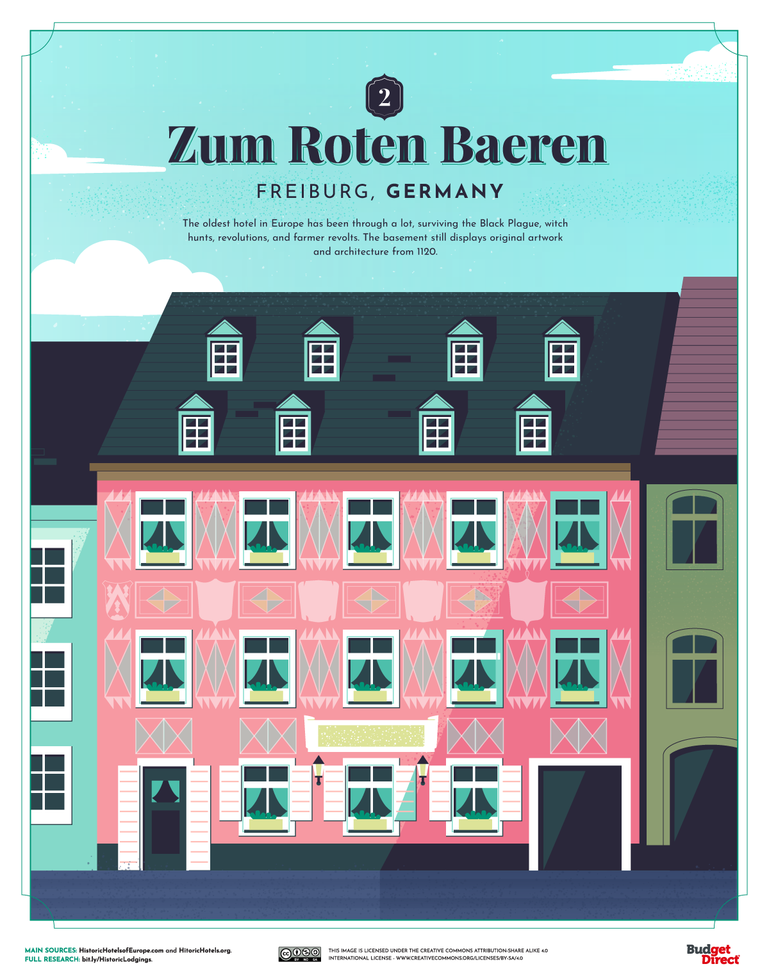 The oldest hotel in the United States, according to the map, is a whippersnapper by comparison: The Seaside Inn of Kennebunk, Maine, began welcoming guests in 1660 and has been in the same family since the middle of the 18th century. 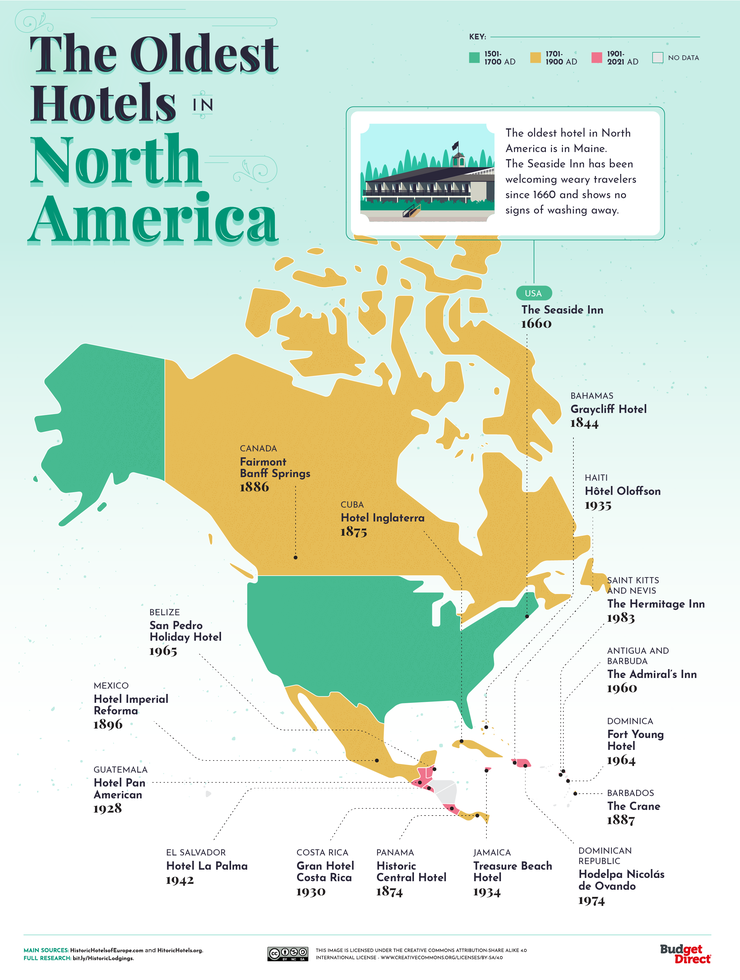 Other way stations and pleasure palaces singled out by researchers for standing the test of time include a Bahamas hotel frequented by pirates and Beatles (not at the same time), an Iranian caravanserai built along the Silk Road, and the youngest oldest hotel: Residenza Paolo VI, which opened in a repurposed monastery in 2000 to become the first (and still only) hotel in Vatican City.

To pore over all the maps and illustrations, visit Budget Direct's website.

And for more on record-breaking places to spend the night, see our feature on the world's oldest, tallest, most expensive, and longest-laundry-chute-having hotels.