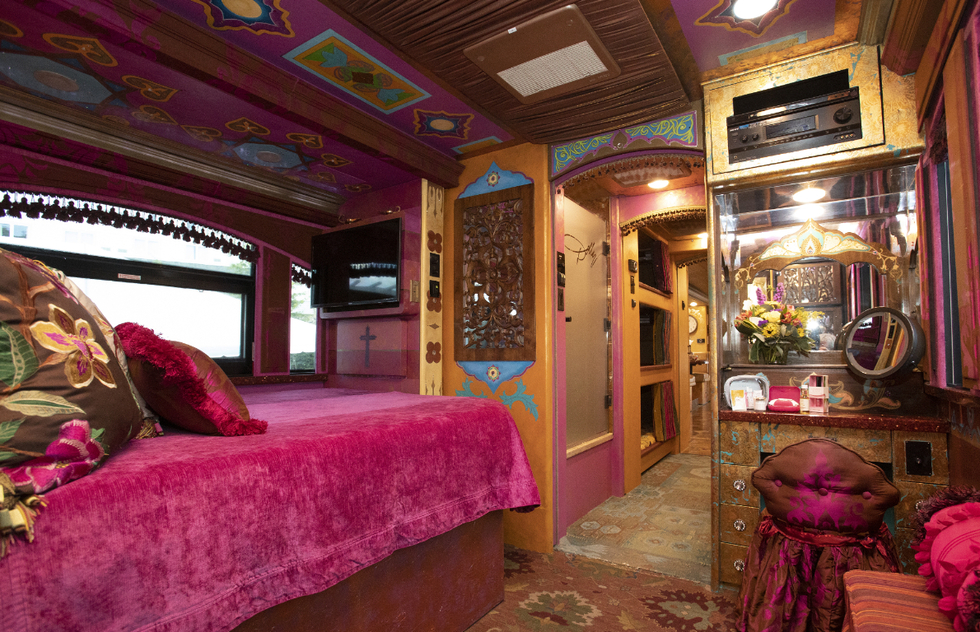 Howdy, Dolly Parton Fans! Now You Can Book a Stay on Her Retired Tour Bus

Used by the superstar from 2008 to 2022, the 45-foot-long decommissioned Prevost motor coach is now permanently parked outside the DreamMore Resort and Spa at Parton's Dollywood theme park in Pigeon Forge, Tennessee. 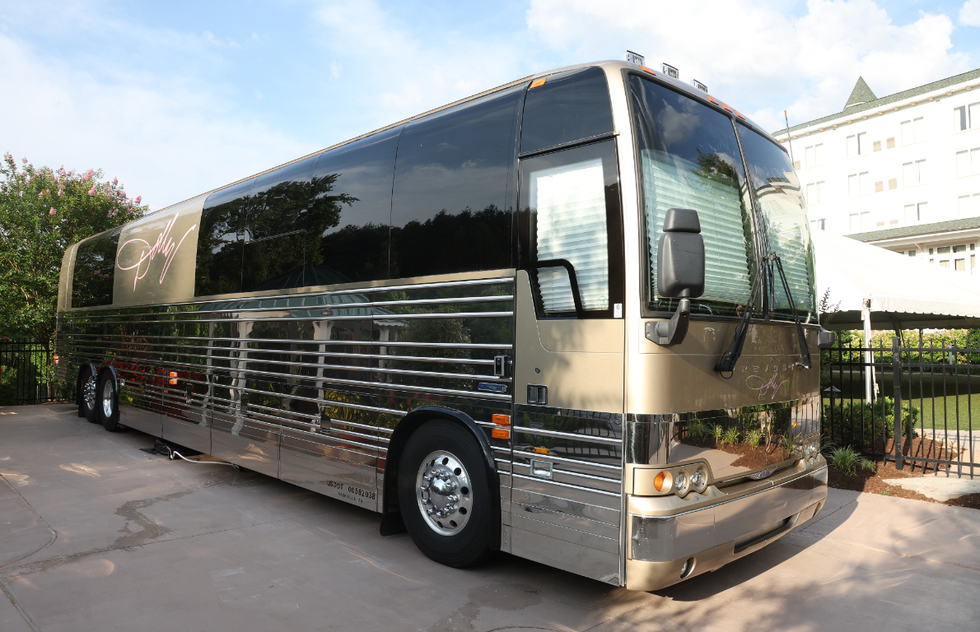 As part of the resort's Suite 1986 Tour Bus Experience, two visitors can spend a minimum of 2 nights in the converted hotel suite for a whopping $10,000.

Though that is a lot of money, the offering isn't just a cash grab on the order of a certain exorbitantly priced Star Wars–themed Disney hotel we could mention.

According to a Dollywood press release, a sizable chunk of the proceeds from every stay on the bus will be donated to The Dollywood Foundation, the nonprofit that funds Parton's literacy-promoting Imagination Library, which has given more than 100 million free books to kids across the U.S. and beyond.

The interior of the bus retains the decor and customizations installed for the singer-songwriter-philanthropist-demigoddess for the nearly 15 years she relied on the vehicle to crisscross North America, putting roughly 360,000 miles on the odometer. In addition to sleeping in the bus's befringed boudoir, Parton is said to have written portions of 2008 album Backwoods Barbie, the Broadway adaptation of 9 to 5, and other works while on board. 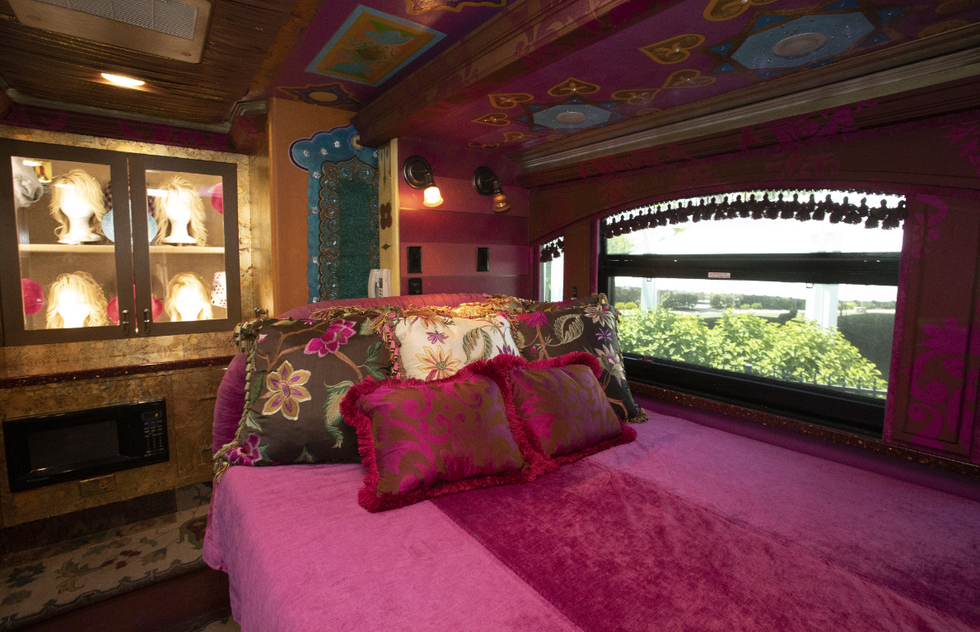 The interior contains a kitchenette with a full-size refrigerator; two bathrooms, including one with a soaking tub; and a closet with—indispensably—a wig cabinet.

The pink-tinged, burlap-and-satin design scheme is fittingly maximalist and homey at the same time, with lots of tassels, floral prints, and colorful walls. Think rural cabin meets Frederick's of Hollywood.

Display cases show off memorabilia such as stage costumes, jewelry, and wigs. We regret to inform you that those items are kept behind glass and therefore not for trying on. 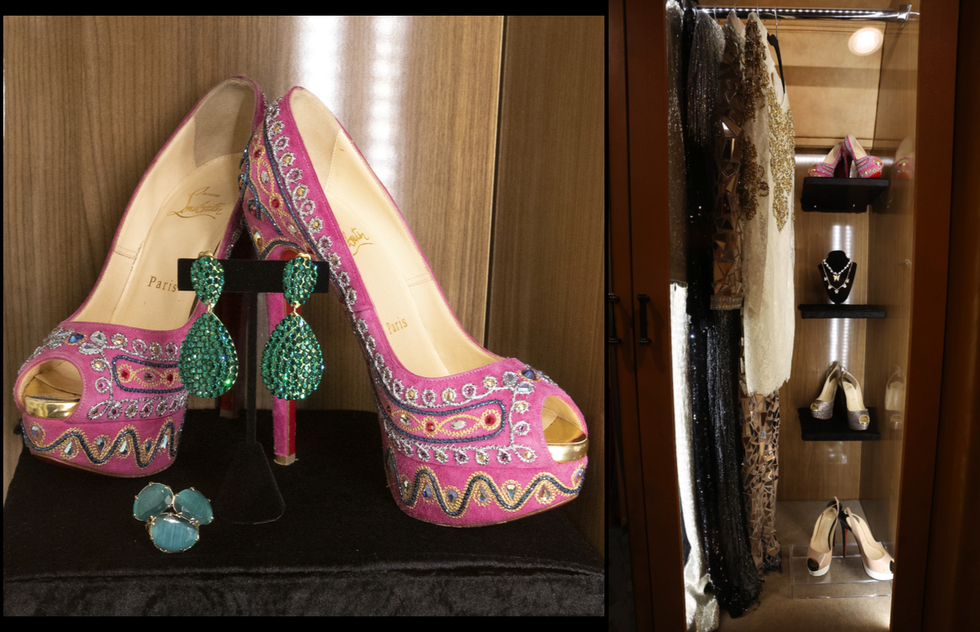 Guests do get some swag to take home, though. According to The Points Guy, souvenirs include a copy of Parton's book Songteller: My Life in Lyrics and her perfume, Scent from Above.

Each 2-night stay also comes with a private dining event, dedicated concierge service, and a guest room inside the main DreamMore Resort building for up to four additional guests so that you can bring along other friends or family members (only two people can sleep on the bus at a time).

The resort's website says the bus can be seen from the room, presumably so that the latter's occupants can gaze upon the vehicle and burn with the envy of someone losing her man to a green-eyed temptress with beauty beyond compare and flaming locks of auburn hair.

For extra charges, you can add Dollywood park tickets, dinner show reservations, and excursions in the surrounding Great Smoky Mountains to the package.

For more information or to request a stay on the tour bus, go to Dollywood.com.