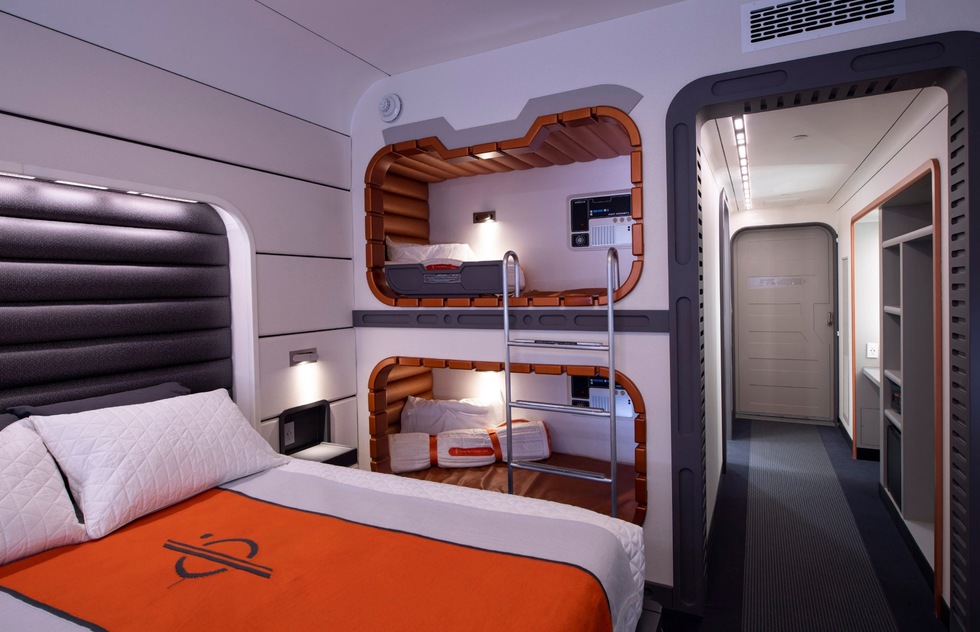 Starting next spring, the new luxury hotel, which was recently constructed behind Disney's Hollywood Studios theme park in Florida, will invite guests to role-play as if they’re passengers on the deep space version of a luxury cruise ship called the Halcyon.

For more than two years, Disney has been teasing details about the experience in a flow as slow and relentless as the dribble from Jabba the Hutt's chin.

For two-night stays, families are assigned “cabins” (pictured above) with bunk-bed pods and windows looking out on animated planets and stars.

But that's only the beginning of the fantasy. Each guest is also given a story line to follow throughout the mock vessel, murder mystery-style. The personalized arc plays a role during mealtimes populated by aliens, interactions with interplanetary peoples in the ship's common areas, and even some light weapons and navigational training (gee, wonder if that will come in handy at all). 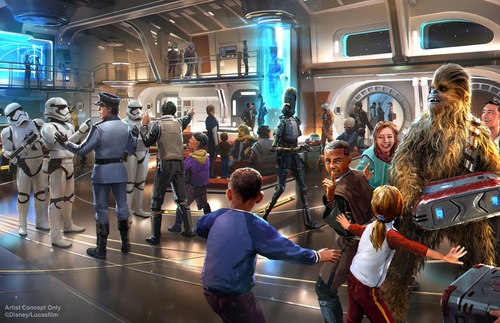 On the second day of their stay, guests are shuttled by a theatrical vehicle into a side door of Star Wars: Galaxy’s Edge for a day at Disney's Hollywood Studios theme park.

Surik’s blade, it sounds cool! When Galactic Starcruiser opens, humankind may officially max out the meanings of the words immersive and experience.

And such a cool, immersive experience requires cool, hard cash.

On Wednesday, Disney released the rates for the upcoming hotel, and it's now clear that very few of us will ever see the inside of this ship.

And that's just the rock-bottom price for a standard cabin. Suites, which have more living space, start even higher. 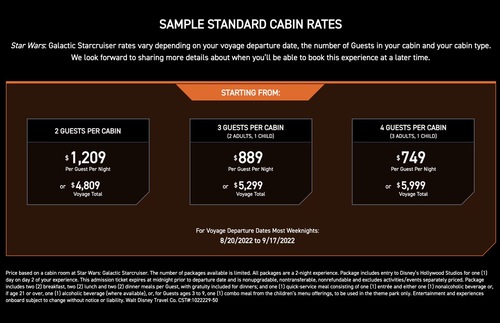 The rate includes six meals and a voucher for a counter-service meal inside the theme park, but not alcoholic beverages.

With prices like that, no wonder the characters in the Star Wars movies could only afford to fly the beat-up Millennium Falcon and had to use the same droids for 45 years.

The extreme tariff follows a few other developments that seem to signal a major internal strategy shift for Disney, as the company repositions its vacation products to appeal to only the highest incomes. Those recent changes include charging for the previously complimentary FastPass, gutting guest benefits at hotels, and scaling down theme park offerings without reducing ticket prices.

There's no doubt that price aside, the creators of this two-night stay have come up with some truly delightful concepts and surprises. It's just a shame more people won't be able to enjoy them. Watch the Imagineers behind the hotel have a roundtable discussion (produced by Disney Parks) about all the brilliant stuff they're trying to accomplish with the hotel.

This hotel is in a price category far, far away from most vacation budgets, but Disney's sales pitch is about to hit light speed through big TV advertising buys. To share the latest announcements, Disney has set up a data portal (or website) at starwarsgalacticstarcruiser.com.