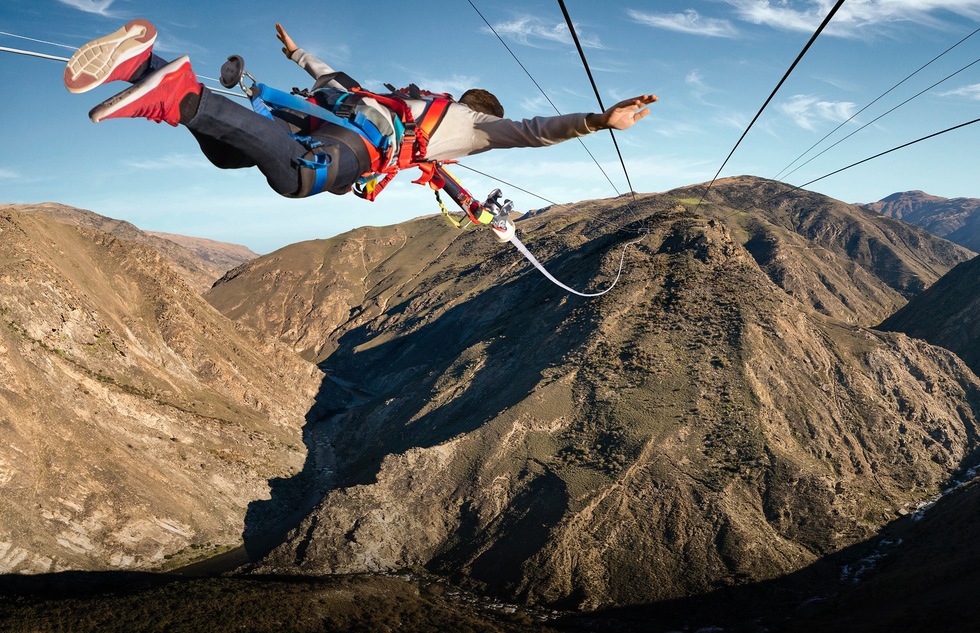 New Zealanders are like Elphaba in Wicked—they're obsessed with defying gravity.

The world's first permanent commercial bungee operation was established by AJ Hackett Bungy (that's how Kiwis spell it) in 1988 over a gorge near Queenstown on the country's South Island. In the three decades since, many more places for playing human yo-yo have been set up over New Zealand's lakes, dramatic mountain valleys, and even the city of Auckland (you can jump from the Sky Tower at a height of 192 m / 630 ft.)

Variations have been introduced over the years, such as bungee swings designed to send you swooshing between cliffs like a hypnotist's pendulum (you're getting very sleepy . . . because you've passed out from terror).

The AJ Hackett company's latest innovation in the field of giving nightmares is sort of like those swings, except that riders are mechanically launched 150 m (492 ft.) across the Nevis Valley, reaching speeds of almost 100 km/hour (62 mph) in less than two seconds.

It's called the Nevis Catapult and there's nothing like it anywhere else. The below video, if you can stand to watch it, provides a quick look at what daredevils are in for when they take the plunge.


The experience costs NZ$255 (US$171) and involves a bus ride to the remote site from Queenstown. You can buy tickets as well as review age, weight, and medical restrictions at the AJ Hackett Bungy website.

As heart-stopping as the whole thing looks, the catapult has at least one advantage over traditional bungee jumping: Since someone launches you instead of asking you to step over a ledge, you can't chicken out—as a certain Frommer's writer once did—after you've been strapped in.
News
Outdoor & Adventure
Videos