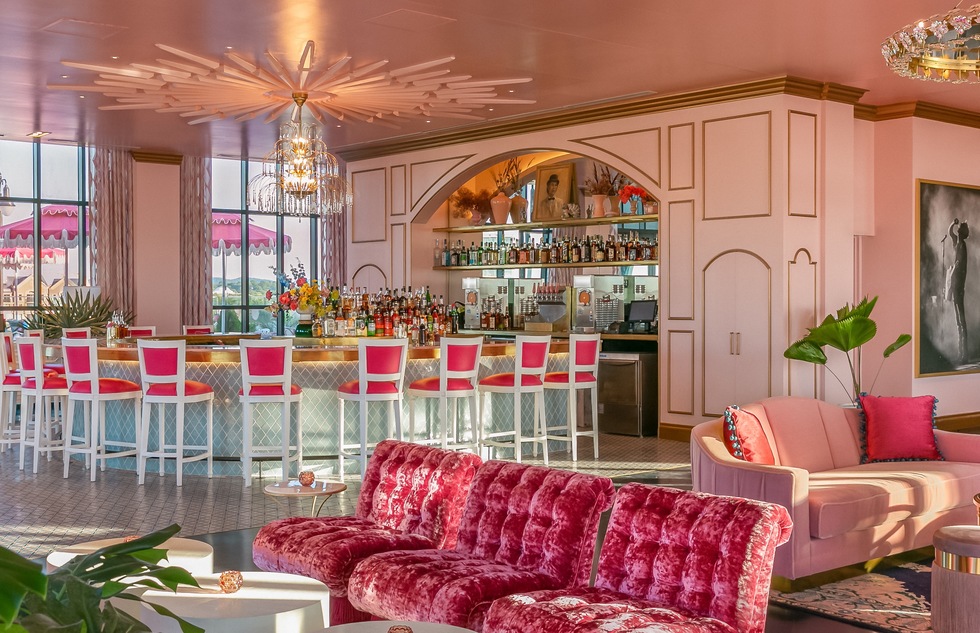 In the divisive times we're living in, Dolly Parton is one of the few public figures you could fairly describe as universally beloved. (The only others we can think of are Betty White and Baby Yoda.)

The country singer, songwriter, theme park magnate, and maximalist style icon is being celebrated with a new rooftop restaurant in Nashville, where she built her career. The new establishment is inspired by her patented blend of over-the-top glam and down-home approachability—or Burlap & Satin, as one of her album titles summed it up.

The indoor-outdoor bar and restaurant, with which Parton is not involved except as an inspiration, is named after another of her albums: 1989's White Limozeen.

The predominant color in the space, however, is pink in all shades from "blush and bashful" (howdy, Steel Magnolias fans!) to Backwoods Barbie magenta. 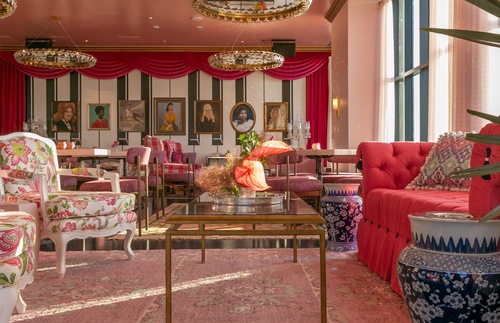 The think-pink design scheme applies to the eclectic indoor furnishings (tufted sofas, crushed-velvet armchairs), the curving pink onyx bar, the outdoor patio's pink-and-white striped walls, and even a sculpture of Dolly Parton made out of pink chicken wire amid the bright pink patio umbrellas.

Other elements include gilded woodwork, chandeliers, and a wading pool. 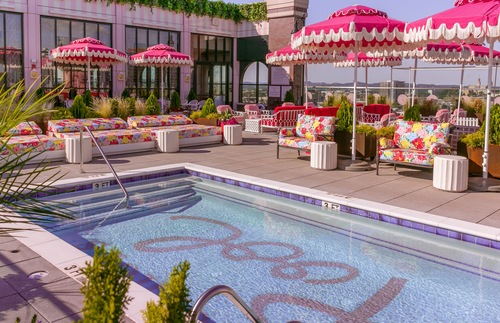 The rooftop was originally scheduled to debut in March, but tornadoes in the Tennessee capital and then a pandemic across the globe delayed the opening until late last week.

White Limozeen's developers, Med Abrous and Marc Rose, told the Nashville Tennessean that the restaurant will comply with safety guidelines from the CDC and the city.

That means that guests will be spaced out and, in keeping with citywide orders from the mayor, capacity will be limited at 50% and the business must close each evening by 10pm. The city has temporarily shuttered bars to stop the spread of the coronavirus, but places that serve food in addition to alcohol can still operate. 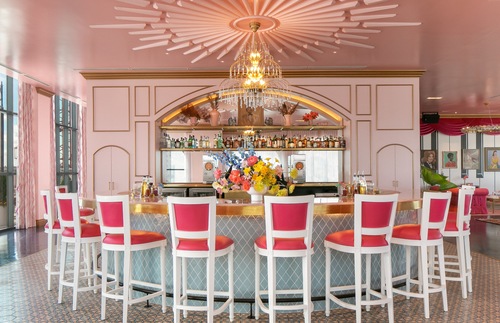 White Limozeen has come up with its own safety innovation as well. The Tennessean reports that carts that were going to be used for tableside salad bars have been repurposed as rolling "sanitation stations" equipped with hand sanitizer, wipes, and gloves for guests.

In keeping with the overall theme, chef Chris Lewallen's menu balances high and low in dishes such as trout fritters with almondine dip, mussels steamed in Nashville hot butter, and biscuits and caviar.

We searched in vain for Dolly-related puns on the bar's menu of specially designed cocktails (no "I Will Always Love Ouzo"? or "The Jolini"?). But we'd settle for the Queen of the Rodeo, described in the menu as a "gussied-up Cosmo."

Guess what color it is.