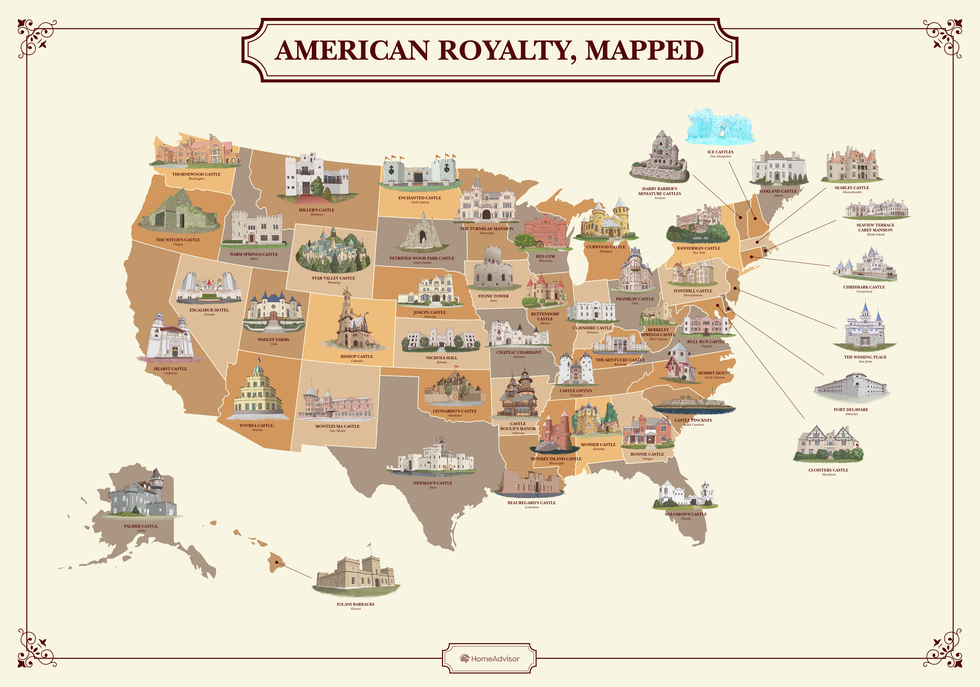 The Best Castles in the USA: Plot a Regal Road Trip with This Storybook Map

We don't typically think of the United States as a land of castles.

But the country has had its share of gazillionaires eager to mimic Europe's architectural styles in gargantuan estates such as the Gilded Age mansions in Newport, Rhode Island, and the hilltop showplace built for media mogul William Randolph Hearst in San Simeon, California.

Perhaps more intriguing, though, are the kitschy storybook castles that have cropped up in many locations from coast to coast, usually to lure tourists or, even better, to fulfill the turret-filled artistic vision of a local eccentric with some scrap metal and a dream.

A new illustrated map released by the home improvement digital marketplace HomeAdvisor spans both kinds of American châteaus, from the self-consciously grand to the quixotically kooky. The graphic (which can be seen above or at HomeAdvisor's website for closer inspection) highlights what the company's researchers deem the best castle in each of the 50 states.

For each selection, there's a quick description in text and an illustration created in collaboration with NeoMam Studios. The results look like they could have been ripped from a book of fairy tales. 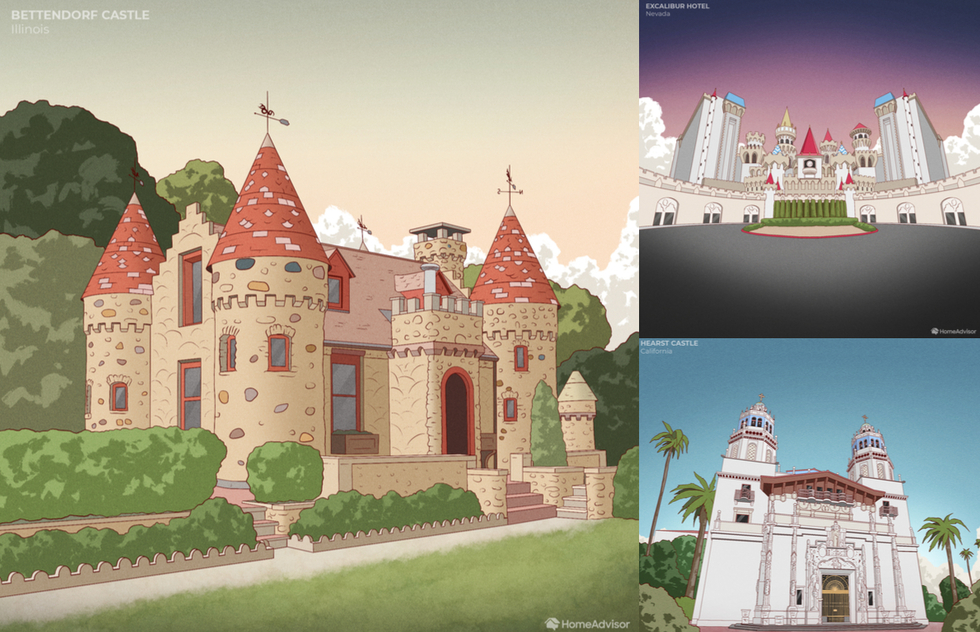 In addition to well-known properties such as the medieval-themed Excalibur Hotel & Casino in Las Vegas and California's aforementioned Hearst Castle, many wonderfully weird architectural follies represent their respective states.

There's a tower fronted by a giant metal dragon's head at Bishop Castle in Rye, Colorado. The aluminum siding on Solomon's Castle in Ona, Florida, could sear your corneas on a sunny day.

The ramparts of Beauregard's Castle (aka Fort Proctor) east of New Orleans have sunk so far the site can only be visited by kayak. And a moat-protected princess castle in Mississippi was built by the Depression-era Works Progress Administration to house monkeys at the Jackson Zoo.

There are structures built out of petrified wood (in South Dakota) and ice (in New Hampshire), along with more sculptures of legendary creatures than you could shake a royal scepter at.

That all sounds like prime road trip fodder to us.

Visit HomeAdvisor.com to see a bigger version of the map as well as the illustrations and descriptions for all 50 castles, many of which are also described in the destination guide pages here at Frommer's.

For more on the delightful quirks to be found between castles during a drive across the USA, see our feature on the country's most epic roadside attractions.