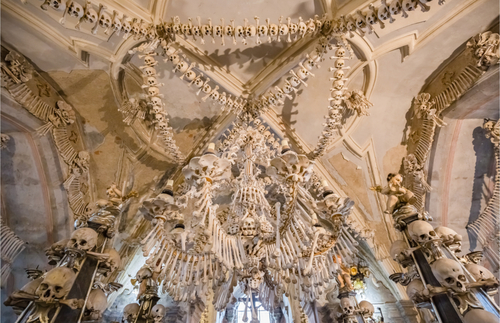 A medieval town that grew fantastically rich from the silver deposits beneath it, Kutná Hora is also a popular day trip from Prague. Small enough to be seen in a single day at a brisk pace, the town's ancient heart has decayed, which makes it hard to believe that this was once the second most important city in Bohemia. However, the town center is also mercifully free of the ugly, Communist-era buildings that plague many of the country's small towns. The historic center and Kutná Hora's main draw, St. Barbara's Cathedral, have been on the UNESCO list for more than 10 years. Also, the macabre Bone Church (Kostnice), filled with human bones assembled in bizarre sculptures, is worth a visit.

Getting There -- The 50-minute drive from Prague is relatively easy. Take Vinohradská street, which runs due east from behind the National Museum at the top of Wenceslas Square, straight to Kutná Hora. Once out of the city, the road turns into Hwy. 333.

If you don't have a car, your best bet is to go by bus, which departs from Prague's Florenc Bus Station and takes about 1 1/2 hours. It costs 70Kc. Trains take you to from Prague's Hlavní nádrazí station to Kutná Hora in just over an hour.

Visitor Information -- The Information Center (Informacní Stredisko; tel. 327-512-378), on Palackého nám. 377, provides the most comprehensive information service in town. Check to see if anything special such as a recital or an exhibition is showing. The office is open daily 9am to 6pm (Apr-Sept); Monday to Friday from 9am to 6pm and Saturday and Sunday from 10am to 4pm (Oct-Mar). The town has also posted very useful signs just about everywhere to help visitors get where they're going.

The main attraction is the enormous St. Barbara's Cathedral (Chrám sv. Barbory) at the southwestern edge of town. In 1380, Peter Parlér began construction of the cathedral. The task was so great that it took several more Gothic masters, including Matthias Rejsek and Benedikt Rejt, close to 200 years to complete the project. From the outside, the cathedral's soaring arches, dozens of spires, and intricate designs raise expectations that the interior will be just as impressive -- and you won't be disappointed.

On entering (you have to enter from the side, not the front), you'll see several richly decorated frescoes full of symbols denoting the town's two main industries of mining and minting. The ceiling vaulting, with floral patterns and coats of arms, has made many a jaw drop. Admission is 50Kc for adults and 30Kc for children. The cathedral is open from May until the end of September from Tuesday to Sunday from 9am to 5:30pm, and Monday from 10am to 4pm. From October until the end of April, it's open Tuesday to Sunday from 10am to 4pm.

When you leave the cathedral, head down statue-lined Barborská Street, where you'll pass the early baroque Jesuit College, built in the late 17th century by Giovanni Domenico Orsi. Farther down the road is the Hrádek, a 15th-century castle that now houses the Czech Museum of Silver (Muzeum stríbra) (tel. 327-512-159). If you take the tour of Hrádek, you'll actually tour one of the town's mine shafts. The tour begins in a small room filled with artifacts from the town's mining and minting industries. After a brief speech, it's time to don hard hats and work coats to tour the mine shaft. After a hike of about 270m (886 ft.), you'll descend into a narrow corridor of rock and dampness to spend about 15 minutes in the mines. Children like this part of the tour almost as much as they do the bone church. The museum is open Tuesday to Sunday: April and October from 9am to 5pm; May, June, and September from 9am to 6pm; and July and August from 10am to 6pm. It's closed from November until the end of March.

Once you're back aboveground, go down the hill to St. James's Church (Kostel sv. Jakuba) and the Italian Court (Vlasský Dvur; tel. 327-512-873). Even though the door is usually closed at St. James's, it's worth trying to open; perhaps you'll be able to glimpse the baroque paintings on the walls. More likely, though, you'll have to admire the church from the outside and then head on to the Italian Court.

Constructed in 1300 as a royal mint (what better way for a town to become rich than to print money?), the Italian Court derives its name from its original occupants, who were brought in from Florence to mint coins. The building houses a museum of coins made here between the 14th and 18th centuries, including the Czech groschen, the currency of choice in the Middle Ages. Another reason to take the tour is to see the ornate chapels, impressive in their details. Admission, including the tour, is 100Kc and 60Kc. It's open daily April to September from 9am to 6pm; October and March from 10am to 5pm; and November to February from 10am to 4pm.

Two Warnings -- The Hrádek mine shaft can be a little claustrophobic (what mine isn't?). Never take your hard hat off (low, jagged ceilings can quickly bring about premature balding).

The Bone Church in Sedlec

A visit to Kutná Hora isn't complete without a trip to Kostnice (tel. 728-125-488; www.kostnice.cz), the "Bone Church" (pictured above). It's located 1.6km (1 mile) down the road in Sedlec (within comfortable walking distance from the train station if you arrive by train). From the center of town, you can take a taxi or board a local bus on Masarykova Street.

From the outside, Kostnice looks like most other churches. But from the moment you enter the front door, you know that this is no ordinary church -- all of the decorations are made from human bones. No kidding. Frantisek Rint, the church's interior decorator, created crosses of bone, columns of bone, chalices of bone, and even a coat of arms in bone for the Schwarzenberg family, which owned the church.

The obvious questions are: Where did the bones come from, and why were they used for decorations? The first question is easier to answer: The bones came from victims of the 14th-century plague and the 15th-century Hussite wars; both events killed thousands, who were buried in mass graves on the church's site. As the area developed, the bones were uncovered, and the local monks came up with this idea of how to put the bones to use.

Surprisingly for the number of visitors it attracts, Kutná Hora has very few good restaurants. Still, you'll likely be hungry after a day of traveling and walking around, so these are some of the best of an admittedly average bunch:

One of the nice terraces is the Restaurant Cafe Harmonia (tel. 327-512-275), Husova 105 (to the rear of St. James's Church), making it a convenient stop before a visit to the Bone Church. The salads are fresh and the soups are hot and hearty -- something that isn't all too common in this town. Main courses are 70Kc to 180Kc; no credit cards are accepted. It's open daily from 10am to 11pm.

U Kamenného Domu (tel. 327-514-426), Lierova 147 (2 blocks west of Palackého nám.), is very popular with the locals, serving hearty Czech specialties at bargain prices. There aren't any English menus, but don't be afraid to point at something you see on another table. The best bet here is the Czech staple meal of roasted pork, potato dumplings, and cabbage (159Kc), which will fill you up without the heavy cream sauce that seems to come on a lot of the other dishes. Main courses cost 99Kc to 280Kc. The restaurant is open daily from 11am to 10pm.