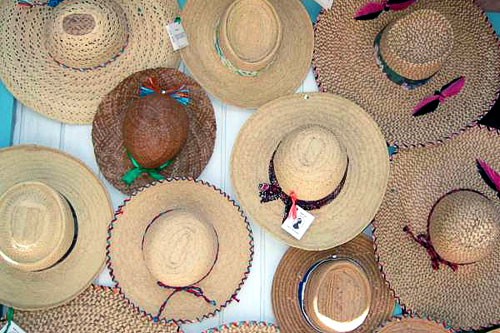 7 Best Souvenirs From the Caribbean

By Alexis Lipsitz Flippin
Caribbean collectibles run the gamut from beautifully woven straw baskets and locally made spirits to shellacked shells. For many of us who crave authenticity, however, it's disheartening to turn over a souvenir from your Caribbean trip and find MADE ELSEWHERE stamped on the bottom. Here is a sampling of some of the best and most authentic gifts/souvenirs to take home -- island mementos that are wonderfully made and made locally. You'll be giving a boost to the local economy and in many instances helping support traditional customs and the continuous good work of native artisans. Sustainability plays a role, too -- a good eco-tourist avoids trinkets fashioned from endangered natural resources, like black coral. And who knows? You just might wind up with a genuine collectible. 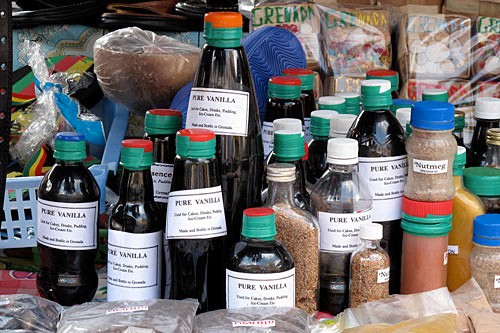 Teesha Dunn
Grenada: Spices
The "Isle of Spice" has long grown more spices per square mile than any other place on earth, kitchen staples like nutmeg, cinnamon, ginger, cloves, bay leaves, and mace. Baskets of fresh dried spices are still sold at Market Square, in St. George's, the Grenada capital. While you're on island, tour the old spice estates and processing factories to see just how the local crops go from tree to table. Tours are offered at the Dougaldston Spice Estate, just outside Gouyave, a weather-beaten relic from the 19th century. Nutmeg finds its way into just about everything here, including spirits (nutmeg wine, anyone?). Look for ponche de crème, which reportedly tastes like Bailey's Irish Cream soaked in nutmeg. 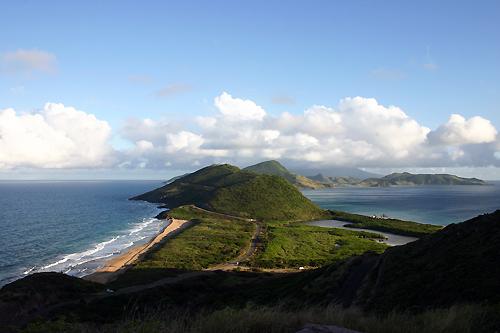 Xkardoc/Dreamstime.com
Nevis: Hot Pepper Sauces
One of the two "sugar islands," Nevis is smaller and less developed than its sister isle, St. Kitts. But Nevis has other ways of getting your attention. The island may be the hot-pepper-sauce capital of the Caribbean, where homemade varieties made with locally grown hot peppers and a boatload of TLC foment flavorful, butt-kicking sauces. You can find a sampling at the City Market (near the ferry dock; open Mon-Sat) in Charlestown or at most supermarkets; look for Verna's Hot Pepper Sauce or Mom's Pepper Sauce. Over in St. Kitts, Mrs. Greaux (pronounced "greer") cooks up an incendiary sauce of local peppers, curry, mustard powder, and secret ingredients and produces only 2,500 bottles a year; buy Mrs. Greaux Hot Pepper Sauce at the duty-free stores in Port Zante and North Frigate Bay or at the airport at JC's Gifts and Things.

Photo Caption: A view of St Kitts with the Caribbean on the right and the Atlantic on the left 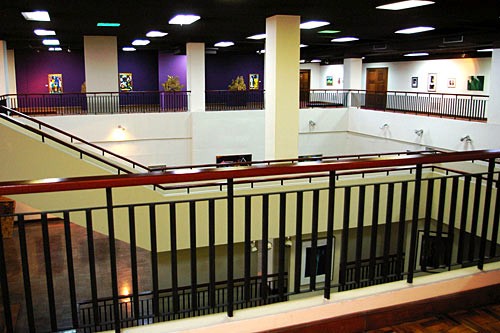 Christina Xu
Jamaica: Art
In the Caribbean, most island art galleries carry a sprinkling of works by local artists and wall after wall of exceptional artworks from the wildly talented artists in Haiti. Jamaica can fill is own gallery walls with fine works from homegrown talent, thank you very much (and at pretty reasonable prices). Check out the artists whose works are sold at the Harmony Hall Gallery, set in a mid-19th-century Methodist manse in Ochos Rios (www.harmonyhall.com). 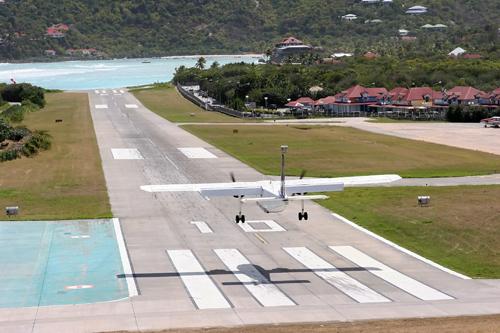 Stephanier/Dreamstime.com
St. Barts: Ligne St Barth
Hit any beach on this tiny island and the scent wafts gently over the sand. It perfumes the air on the terraces of local boÃ®tes and the decks of seaborne leviathans. "It" is Ligne St Barth, a homegrown brand of creams and skincare created and sold by the Brins family, island residents since the 17th century. Brewed from the extracts of native Caribbean fruits and flowers, Ligne St Barth products include sun creams and sunscreens (Solaire) made with oils produced from the tropical roucou tree (a natural insect repellent). You can buy Ligne St Barth at retail stores and hotels on the island or order the products online at www.lignestbarth.com.

Photo Caption: Small plane landing on the airstrip at the base of a steep hill on Saint Bathelemy Island. 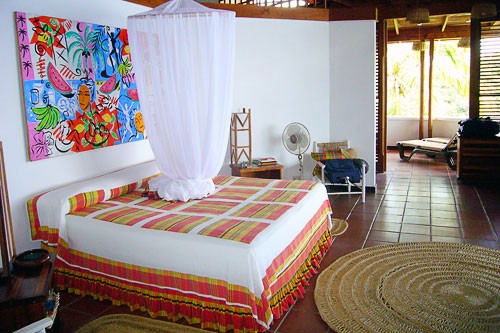 David Lytle
St. Lucia: Madras Goods
It's not easy for any manmade creation to compete with St. Lucia's natural good looks. But the sunny madras prints that are the national dress of St. Lucia are as eye-catching as anything that sprouts from the ground. These prints, in varying combinations of red, blue, yellow, orange, and green, are everywhere you look at traditional Creole celebrations, when women put on their madras finery and tete-en-l'air (headpieces). You can buy table and bed linens in Creole madras at the Anse Chastenet resort (www.ansechastanet.com). A number of local artists incorporate madras into their work, including grass weaver Rosemary Felcion, who combines screw-pine-straw baskets with madras cloth. Felcion is part of the Choiseul Association of Craft & Heritage Tourism (contact Mac Arthur Philip for details; tel. 758/459-9941). 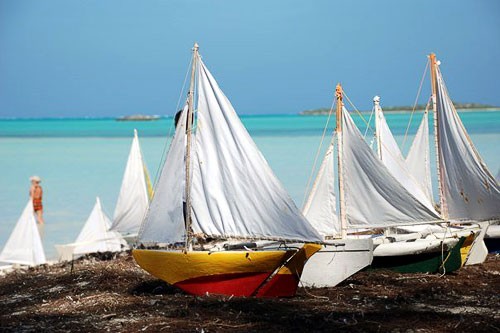 Middle Caicos Co-op
Middle Caicos: Model Sloops
Middle Caicos is the TCI's largest island and the artistic soul of this 40-island nation. This is where artisans sell baskets intricately woven from fanner grass, highly recommended as keepsakes. But it's the traditional hand-carved model sailboats that really catch my eye. These handsome Caicos-style sailboats are made from the gum-elemi trees, and the rigging exactly replicates that of a full-size sloop. You can custom-order your own sloop from the Middle Caicos Sailing Association (tel. 649/946-6132; www.middlecaicos.biz) or head down for the annual Valentine's Day model sailboat races on Bambarra Beach, where the brightly painted hulls and the billowing sails dot the bottle-green seas. 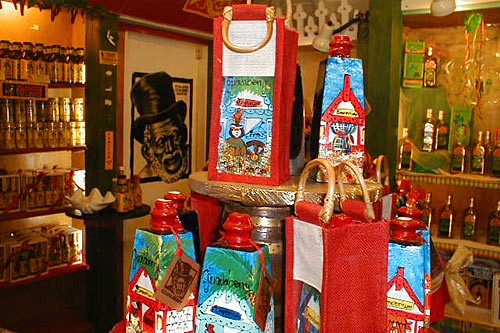 Gruepig
St. Maarten: Guavaberry Liqueur
Wild guavaberry grows up in the hills of St. Maarten, where more guavaberry trees thrive than anywhere else on earth. For more than a century, the berries have been used to make aged guavaberry liqueurs, long a favorite Christmas libation for its spicy, fruity kick. The Sint Maarten Guavaberry Company has a bustling little business making and promoting the indigenous folk drink from its landmark 18th-century cedar townhouse shop (the guavaberry "world headquarters") on Front Street in Philipsburg (www.guavaberry.com). 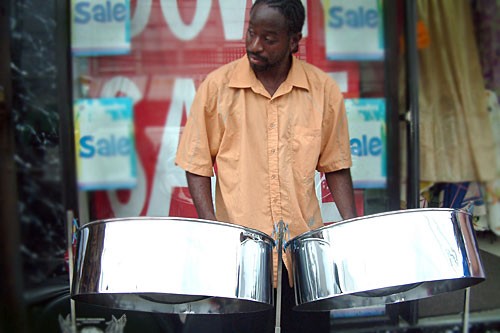 Shanel
Trinidad: Steel-Pan Drums
For me, the singular sound of the steel drum is perhaps the most visceral evocation of the Caribbean. Steel-pan drums evolved from hand drums used in colonial Trinidad by gangs of downtrodden natives chafing under British rule. When hand drums were banned, pans were fashioned out of oil drums. Pounded into a dish-like shape, tempered by fire, grooved, and tuned, these pans became musical instruments. Don't feel like lugging home a big, high-quality steel drum? Authentic working miniature steel-pan drums made in Trinidad can be bought for around $100.