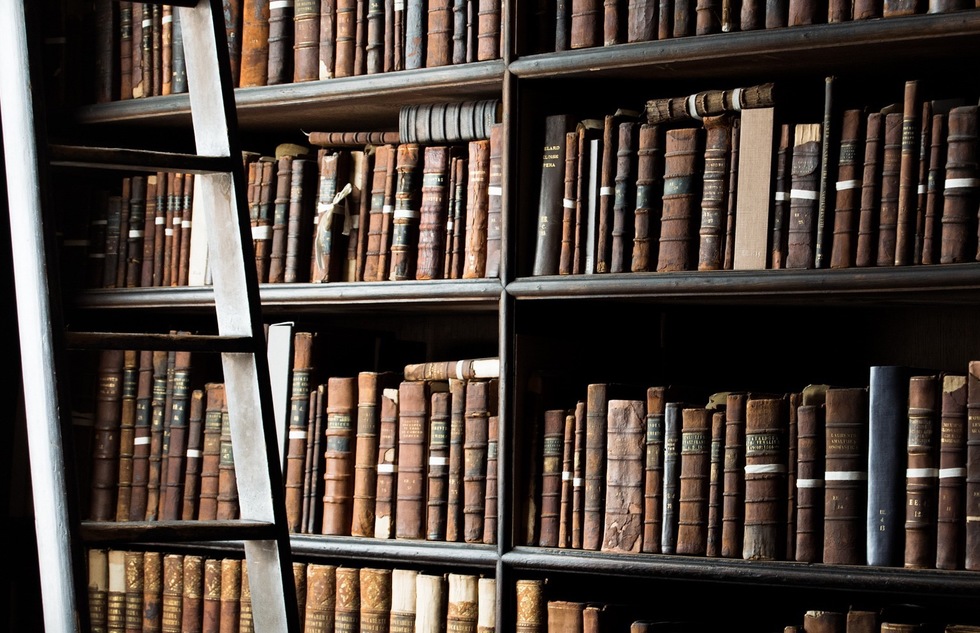 A Tour of Literary Dublin: Where to Appreciate Ireland's Many Famous Writers

Ireland produces so many writers that the country could list literary masterpieces among its chief exports. The center of all the scribbling is Dublin, a city that rivals New York and Paris in that department in spite of being significantly smaller than both. Among the poets, playwrights, and novelists born, educated, or otherwise shaped here: Jonathan Swift, George Bernard Shaw, Oscar Wilde, Lady Gregory, W.B. Yeats, Samuel Beckett, and James Joyce.

Justifiably proud of its wordsmiths, Dublin offers a number of must-see sights for lit-inclined travelers of all kinds, from casual Kindle toters to full-blown bookworms. And because of the city’s manageable size, it’s easy to visit those spots—which include not only museums but also libraries, parks, and pubs—in one gloriously word-drunk day. Come imbibe with us. 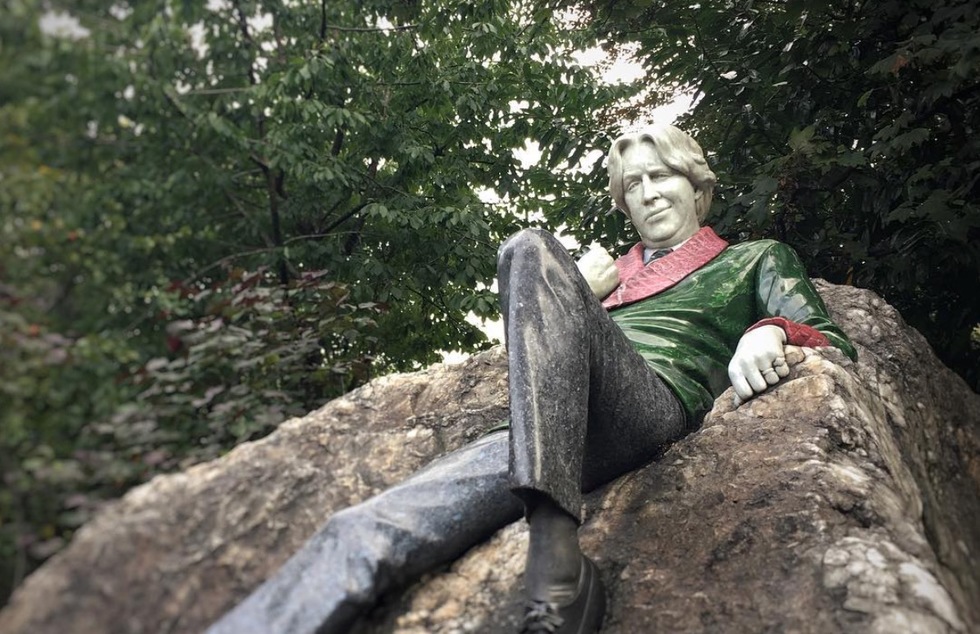 Start your literary day in Merrion Square’s leafy park, where, in the northwest corner, you’ll find a colorful statue of Oscar Wilde lounging on a big chunk of quartz. The poet/playwright/witticism generator (from The Importance of Being Earnest: “If I ever get married I’ll certainly try to forget the fact”) is depicted wearing an appropriately flashy green-and-pink jacket and casting a monumental smirk in the direction of his childhood home. From 1855 to 1878, the future author and his siblings lived here with their mother and father, a nationalist poet and ear-and-eye surgeon, respectively. Now part of American College Dublin, the stately Georgian home can only be toured by large groups with reservations made in advance. 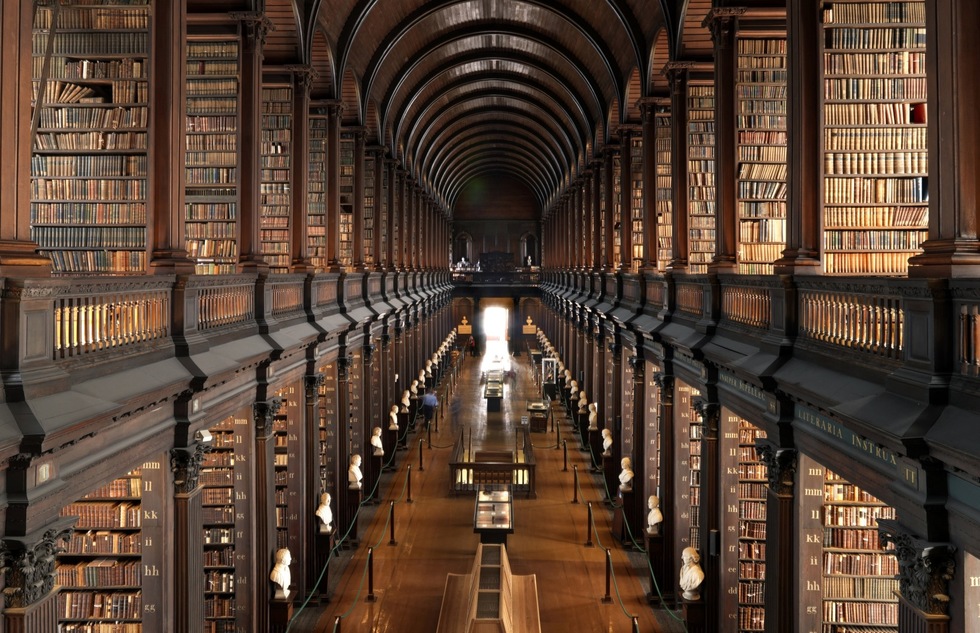 Just west of Merrion Square stands Wilde’s alma mater and Ireland’s most prestigious university, which also counts Dracula creator Bram Stoker, satirist Jonathan Swift, and Theatre of the Absurd playwright Samuel Beckett among its distinguished alumni. But that’s not why you should visit Trinity College. As far as we’re concerned, the school's primary asset is the sheer, showstopping spectacle of the old library’s Long Room, where a barrel-vaulted ceiling arches over a drool-worthy collection of 200,000 leather-bound volumes on dark wooden shelves stretching along a 200-foot hall, all of it lined with white marble busts of great thinkers and writers. If you ever wanted to be Belle in that scene in Beauty and the Beast where her shaggy suitor gives her a room of floor-to-ceiling books (and who didn’t?), this might be as close as you ever get. 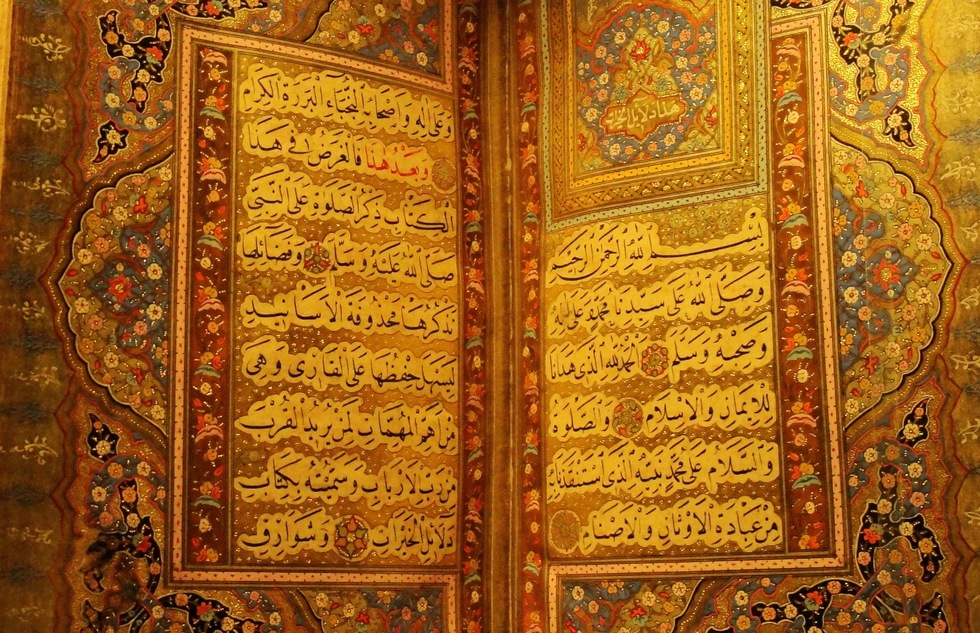 As spectacular as the Book of Kells is, you’ll only get to peer at two pages during your visit to Trinity’s library (it’s a myth, by the way, that one leaf of the volume is turned over every day; it’s more like one every few months). For a fuller array of sacred books and other artifacts, head further west to this small museum on the grounds of Dublin Castle. Though the collection of medieval illuminated Bibles and ancient gospels on papyrus is certainly impressive, the wonders on display aren’t limited to Christianity. You’ll see beautifully preserved Korans and Islamic prayer books like the 15th-century specimen pictured above, miniature paintings from Mughal India, and elaborately carved snuff boxes from East Asia. The museum’s ambitious mission is to capture the “richness of human creative expression from 2700 BC to the present”—and the holdings here go a long way toward achieving that goal. 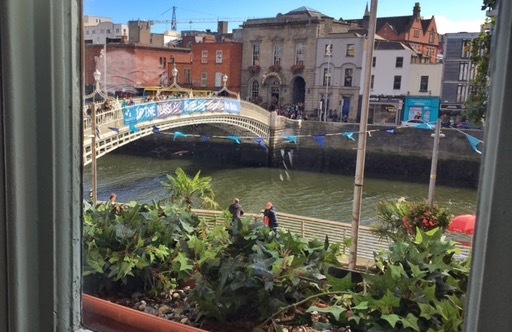 Zac Thompson
Lunch: The Winding Stair
So far, we’ve been tooling around the part of Dublin south of the River Liffey. Now head north, crossing the famous Ha’penny Bridge, and pop into the Winding Stair, a charming bookshop with a large collection of Irish fiction and an excellent children’s section. After browsing or having a coffee while stationed at one of the tables in the window, head upstairs to the restaurant for hearty Irish fare like braised pork cheeks, black pudding, and locally sourced seafood. The bright and airy dining room occupies a prime location overlooking the river and Ha’penny Bridge (pictured above). 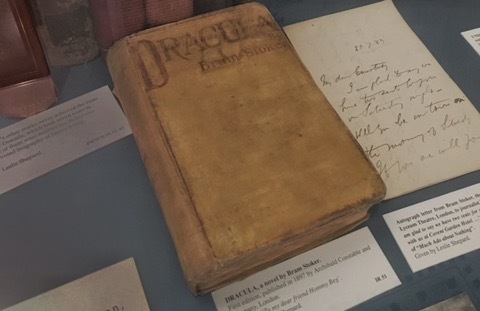 Zac Thompson
Dublin Writers Museum
After lunch, continue north along nearby O’Connell Street—nod hello to the James Joyce statue near the Spire, an almost 400-foot monument that looks like a giant knitting needle and is universally loathed by Dubliners, who call it the “Stiletto in the Ghetto”—until you reach Parnell Square, home to the Dublin Writers Museum. A chronological exhibit walks you through several centuries of Irish letters, touching on the A-listers we’ve been discussing as well as important but forgotten figures such as Maria Edgeworth, credited with being the the first Irish person to write a novel set in Ireland, 1800's Castle Rackrent. In addition to manuscripts, letters, portraits, and a first edition of Bram Stoker’s Dracula (pictured above), the museum displays writers’ belongings as though they were saintly relics. A personal fave: Samuel Beckett’s telephone, equipped with a special button to block incoming calls. Evidently, there was no Call-Waiting for Godot. 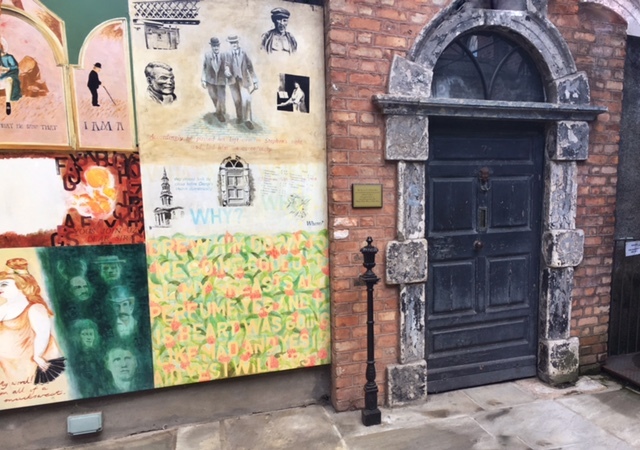 Zac Thompson
James Joyce Centre
Dublin has given a lot to literature, but no author returned the favor like James Joyce. The modernist master spent most of his adult life in Trieste, Paris, and Zurich—but in his imagination, he clearly never left his hometown. As a result, Dublin stars in the most important novel of the 20th century, Ulysses, in which Joyce somehow manages to cram the entire universe into a single day in the life of hapless Leopold Bloom. Occupying an 18th-century Georgian townhouse just around the corner from the Dublin Writers Museum, the somewhat eccentric James Joyce Centre honors the author with an exhibit on U.S. government efforts to censor Ulysses for obscenity, a replica of the cramped Paris apartment where Joyce worked on Finnegans Wake, and the actual door (pictured above) of the house that once stood at Bloom’s purported address, No. 7 Eccles Street. Contemporary artists and academics engage with Joyce’s work in the center’s talks and temporary exhibitions. 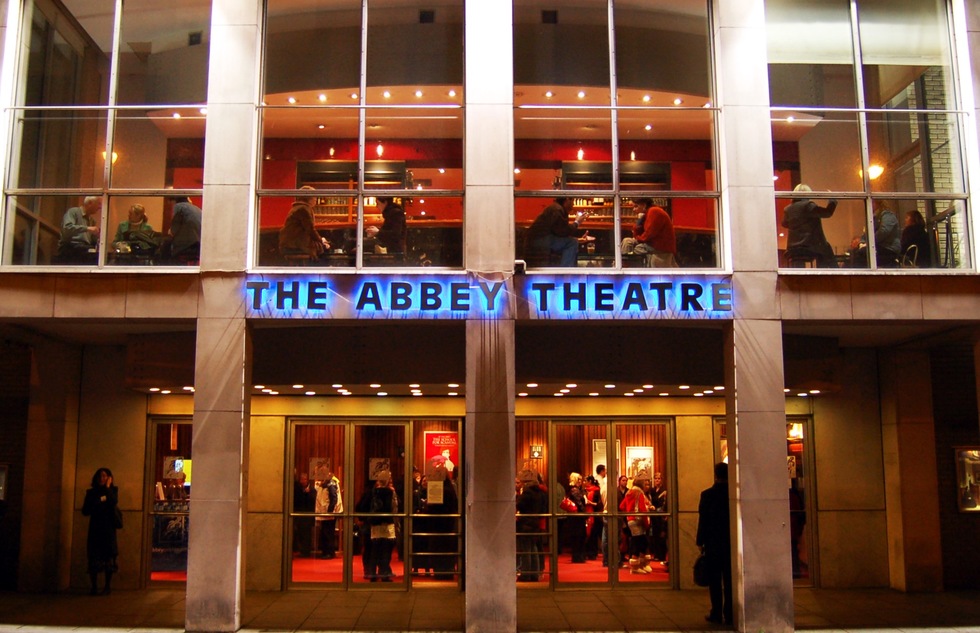 bjaglin / Flickr
Abbey Theatre
Head back south toward the River Liffey to reach the Abbey Theatre, founded by W.B. Yeats and Lady Gregory in 1904 to support homegrown Irish drama. Countless premieres by the country’s leading playwrights, such as J.M. Synge and Sean O’Casey, have been staged here—the first state-sponsored theater in any English-speaking country. You can book a backstage tour to go behind the scenes of the current production, but keep in mind that you won’t be seeing the original playhouse; it burned down in 1951. Better yet, come back in the evening to catch a play in one of Europe’s most respected performing arts venues. 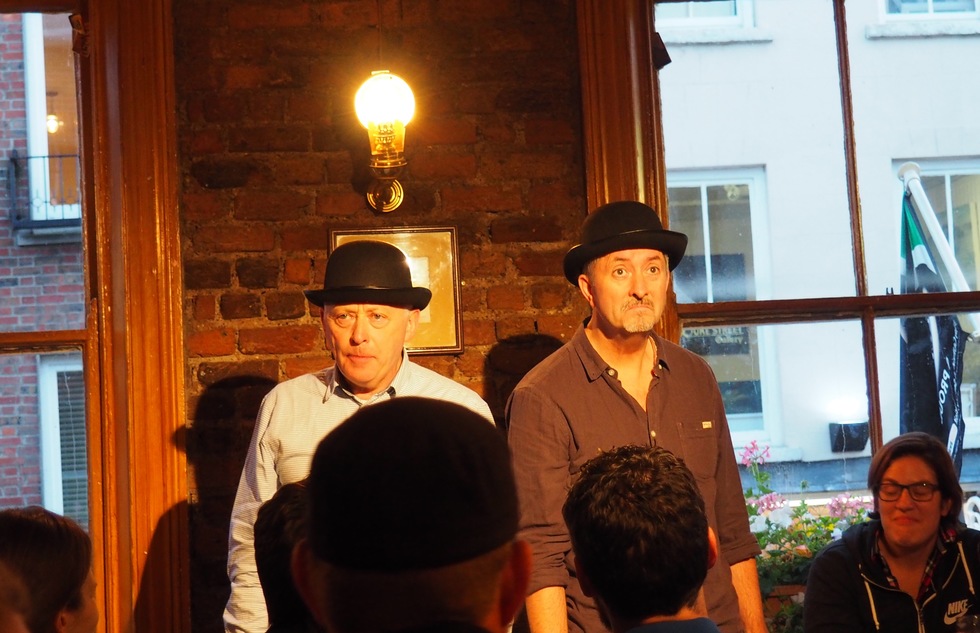 Caitlin / Flickr
Literary Pubs
To foster a rich storytelling tradition, it helps to have a ready supply of booze to loosen the tongue. Maybe that’s the secret to Dublin’s literary bounty—the city’s legendary pubs just might be as crucial to Irish letters as the schools and libraries. That’s why an old-fashioned tavern makes the perfect place to end this tour. Many Dublin pubs have some sort of writer-related legend attached; the snug within Toners on Baggot Street, for instance, is said to be the only spot where W.B. Yeats would take the occasional tipple. Davy Byrne’s, a favorite of James Joyce, shows up in Ulysses—Leopold Bloom stops in for a gorgonzola sandwich and a glass of burgundy. If you visit Dublin on June 16 (known as Bloomsday because the events of the novel unfold on that date), you’ll find the place thronged with Joyce pilgrims in old-timey outfits.