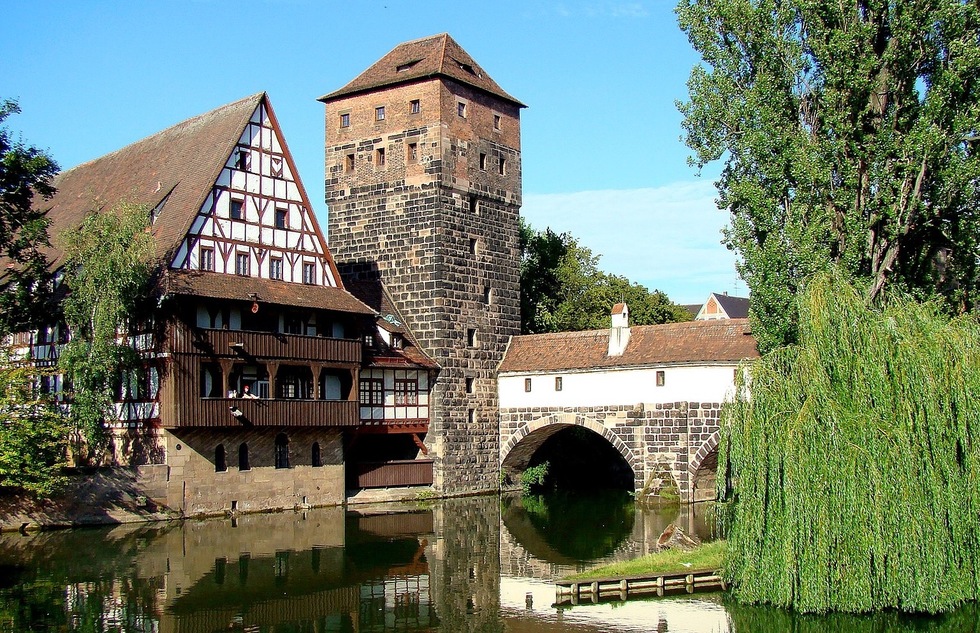 Technically, the region of Franconia in south-central Germany has been part of Bavaria for about 200 years. Locals haven’t quite warmed up to the idea just yet, though. They’ll tell you Franconia has retained its own dialect, culture, cuisine, and even color—bright red compared to Bavaria’s white and sky blue.

It's important to acquaint yourself with the distinctions. With the rising popularity of river cruises through Germany’s waterways as well as the perennial charms of historic castles, vineyards, and civilization-shaping art and music, more travelers are encountering Franconia’s quiet countryside and medieval towns, which flank the river Main and its tributaries (on a map, Franconia looks like somebody spilled wine on the part of Germany between Frankfurt and Munich). Before your own visit, here’s what you should know about this fascinating and fiercely unique land of wurst, Wagner, wine, and Wilhelmine—an extraordinary Prussian noble we’ll get to in a minute. 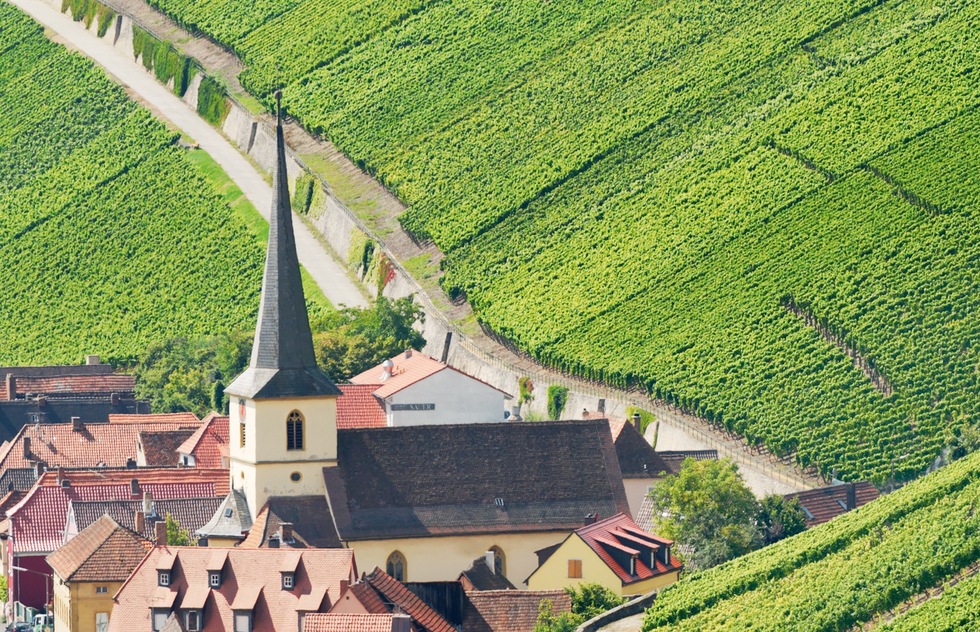 Many of the winegrowers in Franconia are still local families whose modest vineyards line steep hillsides rising over small villages—a picturesque sight to come across on drives, tours, and bicycle rides through the countryside. Scores of small-time viticulturists have their crops turned into wine at Winzer Sommerach (located along the Main about 30 km/19 mi. east of Würzburg), a co-op founded in 1901. Today, visitors can settle in for tastings at the wine bar, take classes on food pairings, and gaze out from a sunny terrace on vineyards such as the award-winning Katzenkopf. Try not to remember that translates to “cat’s head” when you’re drinking the wine. 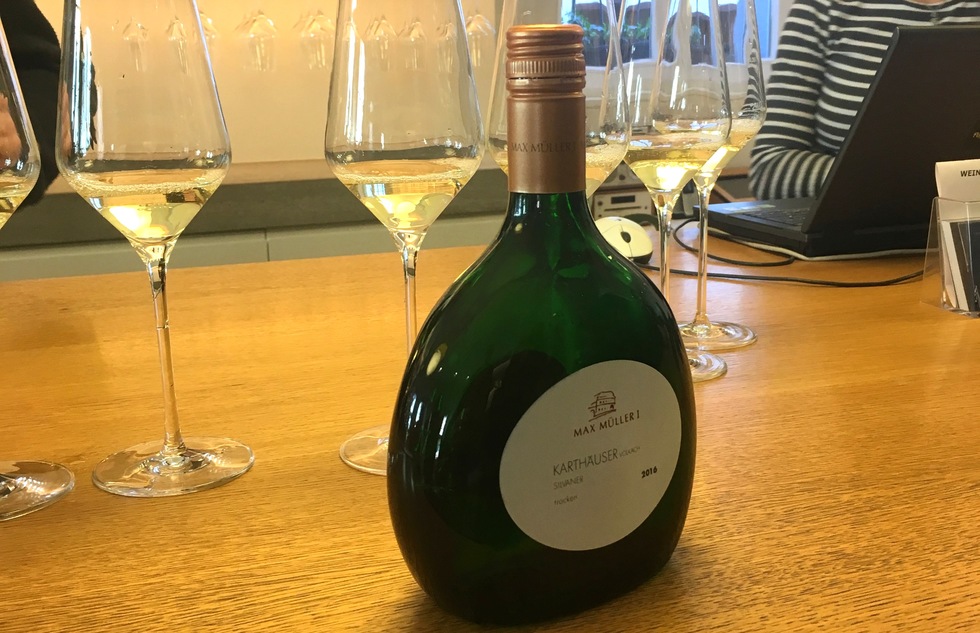 The star varietal of Franconian wine country is Sylvaner (Silvaner in German), a dry and earthy white wine ideally suited to the region’s shell-limestone soil, mild climate, and fertile terrain courtesy of the Main river. The wine is traditionally bottled in a Bocksbeutel, a squat, flattened ellipsoid of dark green glass that looks like a vessel for old-timey potions, which, in a way, it is. You’ll hear differing explanations for the shape—some say it’s good for storage or transport, for instance—but the best story is that the monks who cultivated Sylvaner centuries ago found the flattened shape easy to carry in their belts, six-shooter style. I like to imagine the friars holding quick-draw drinking contests between prayers. 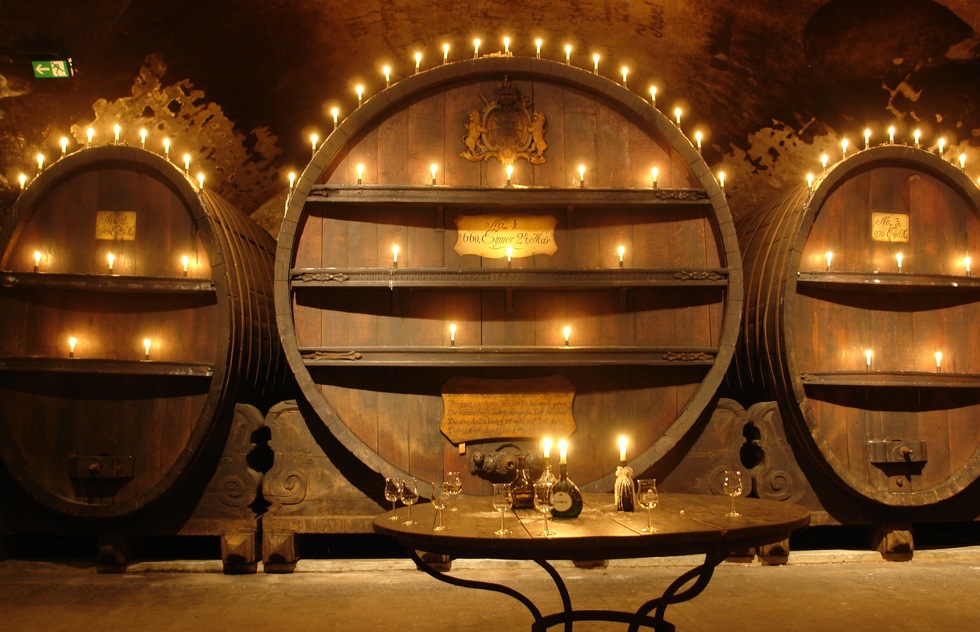 Pascal Reusch [CC BY 3.0], via Wikimedia Commons
Wineries and Cellars

In the town of Volkach, the Max Müller I winery offers the chance to taste what four generations of the same family have learned about grapes. But despite that commitment to tradition, the remodeled interior of the Müllers’ 1692 building is sunny, modern, and minimalist. To feel that you’ve stepped—and sipped—back in time, head west to Würzburg (about 30 minutes by car), and drink some Sylvaner in the spooky, candlelit Staatlicher Hofkeller (pictured above), a wine cellar beneath the city’s 18th-century Residence palace. Whatever you do, don’t at any point refer to what you drink in Franconia as “Bavarian wine,” lest you get a Bocksbeutel upside the head. 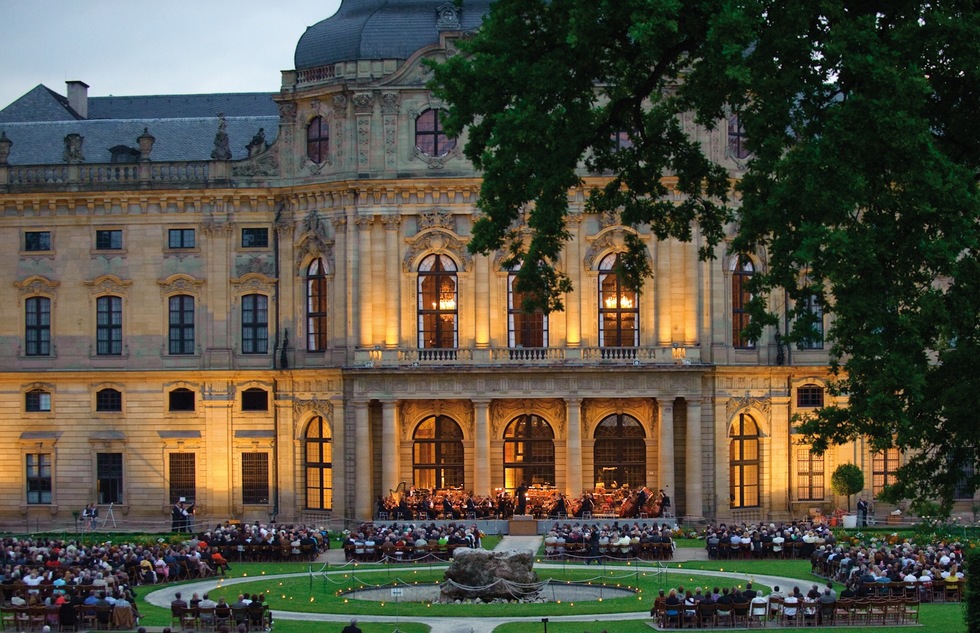 FrankenTourismus/FWL/Würzburg/Hub
The Wonders of Würzburg

The aboveground portion of the Würzburg Residence (pictured above during an outdoor concert) isn’t too shabby either. Completed in 1744, the Baroque palace was built to house the city's prince-bishops—the church-selected governmental rulers—during the tail end of the Holy Roman Empire, a time when not many folks cottoned to the idea of separating church and state. Some opulent reception rooms and royal apartments are now open to the public, but the most impressive sight is in the cavernous entrance hall, where a grand staircase virtually screaming for imperious, orchestra-accompanied ascents leads to a landing under the world’s largest fresco, a depiction of the four corners of the globe painted by Tiepolo. If the point was for the prince-bishop to bowl over his guests with majesty, consider me bowled.

You can also tour the Würzburg rulers’ previous home base, the imposing Marienberg Fortress, which is worth visiting primarily for the hilltop view it commands of the red-roofed city, Main river, and surrounding vineyards. The vast majority of buildings you’ll look on are in what you could call the “Fake-Old School” of architecture—an estimated 90% of Würzburg was destroyed by bombing during World War II. 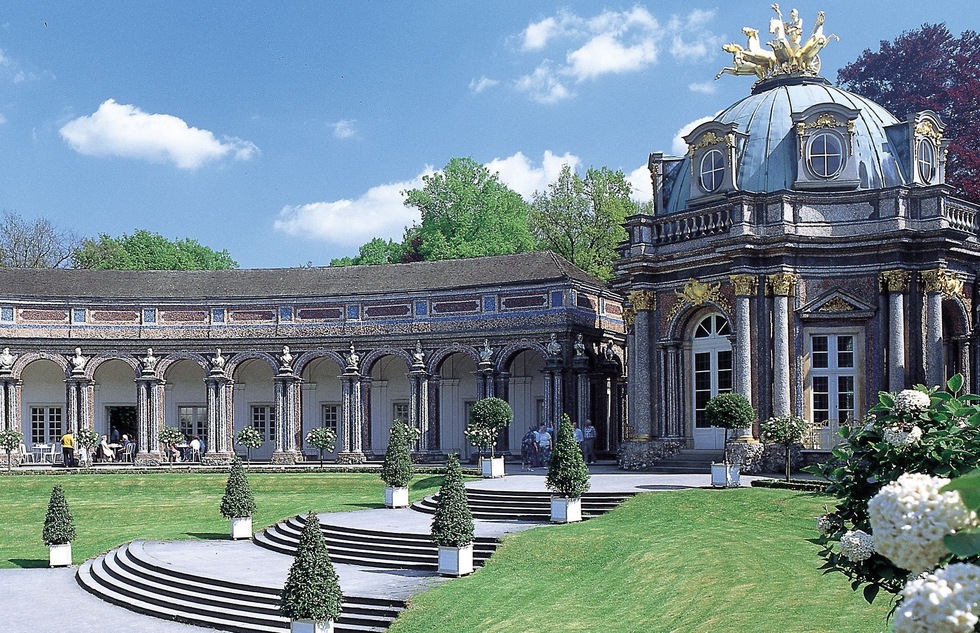 Around the same time the Würzburg Residence was going up in the mid-18th century, a series of similarly ambitious construction projects was transforming the town of Bayreuth, a then-backwater burg about 150 km (93 mi) east of Würzburg. The impetus behind the flurry of building was Princess Wilhelmine of Prussia, Frederick the Great’s beloved older sister who somehow wound up married off to the Margrave of Brandenburg-Bayreuth, a low-level aristocrat basically only a notch or two above city comptroller.

An accomplished composer, painter, and memoirist, Wilhelmine was determined to turn Bayreuth into a cultural and architectural gem, commissioning Baroque buildings like the Neues Schloss (New Palace) with its more-is-more rococo interiors, and expanding the opulent Eremitage retreat (pictured), now a park with gardens and royal palaces you can tour. The look of Bayreuth today owes more to Wilhelmine—her taste, her artsy interests, her force of will—than to anyone else. 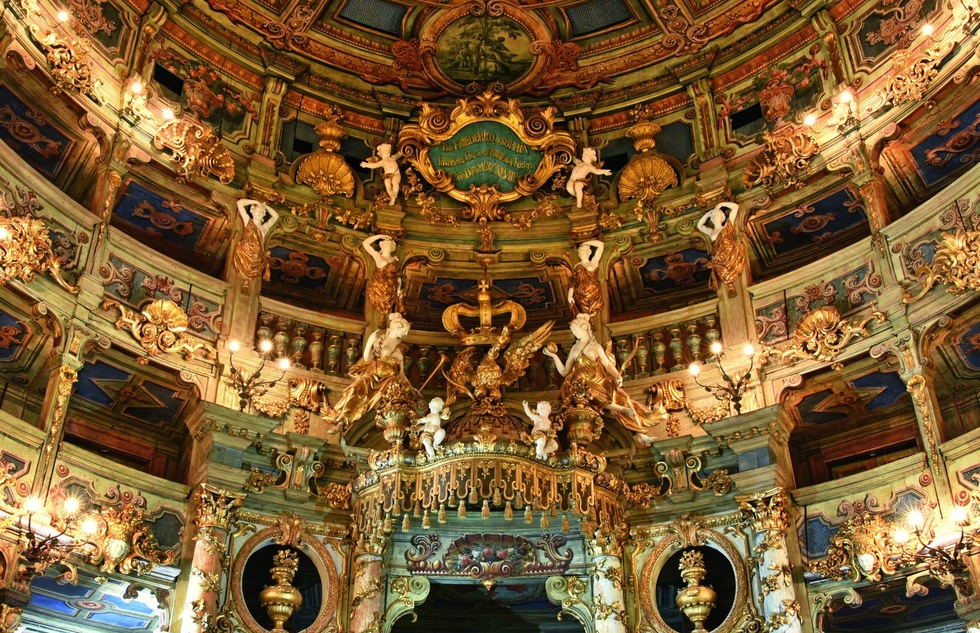 Bayreuth’s showstopper is the ravishing Margravial Opera House, made to order for Wilhelmine in the Italian Baroque style, with an all-wood interior that has miraculously survived. Step into the auditorium, whether for a quick look-see or a full performance, and you’ll be surrounded by three tiers of swirling pastels and extravagant artwork—sort of like the world’s biggest, fanciest wedding cake. Which is fitting since the place was built to celebrate the nuptials of Wilhelmine’s daughter in 1748. Declared a UNESCO World Heritage Site in 2012, the building reopened in 2018 following an extensive, years-long restoration. That means that although this is one of the few remaining performing arts venues from the period, it’s still got that new-opera-house smell. 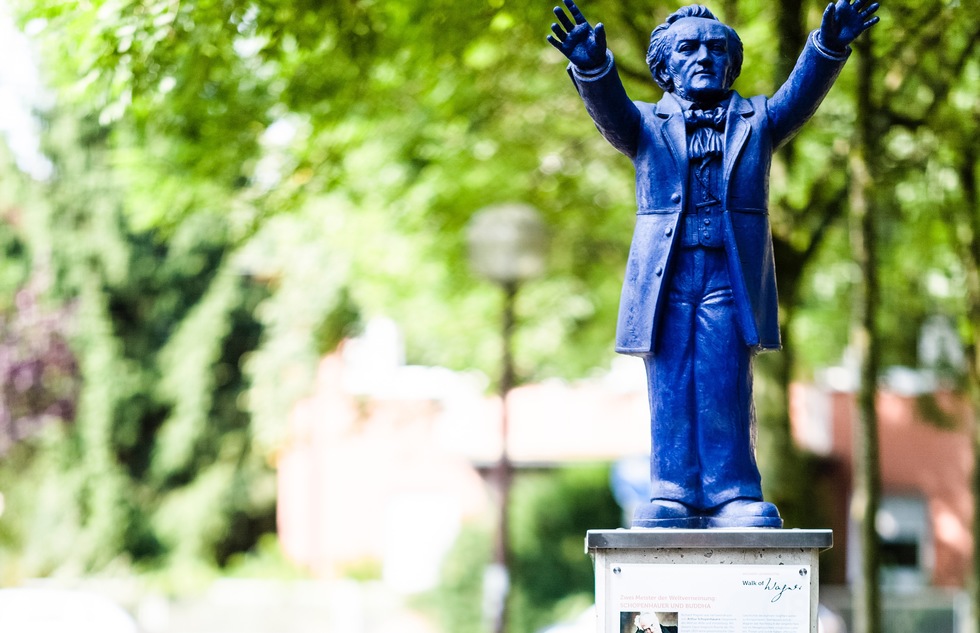 As a matter of fact, the Margravial Opera House is what brought composer Richard Wagner to Bayreuth in the 1870s; he liked the theater’s unusually deep stage. Eventually Wagner had his own opera house built just north of town for the annual Bayreuth Festival celebrating his bombastic works, such as his magnum opus, the four-part Norse epic—and horned-helmet extravaganza—The Ring of the Nibelung.

A museum not far from the festival house examines Wagner’s life and legacy, including the virulent anti-Semitism of the man and some of his fans, the most notorious of whom was Adolf Hitler. Next to the museum, visitors can walk through Wagner’s home, Wahnfried, as well as the house next door, where Wagner’s descendants welcomed the Nazi leader as a guest in the 1930s. An exhibit on the ground floor documents that shameful chapter in the family’s history.

Pictured above: one of Bayreuth's Walk of Wagner markers installed at sites significant to the composer's life 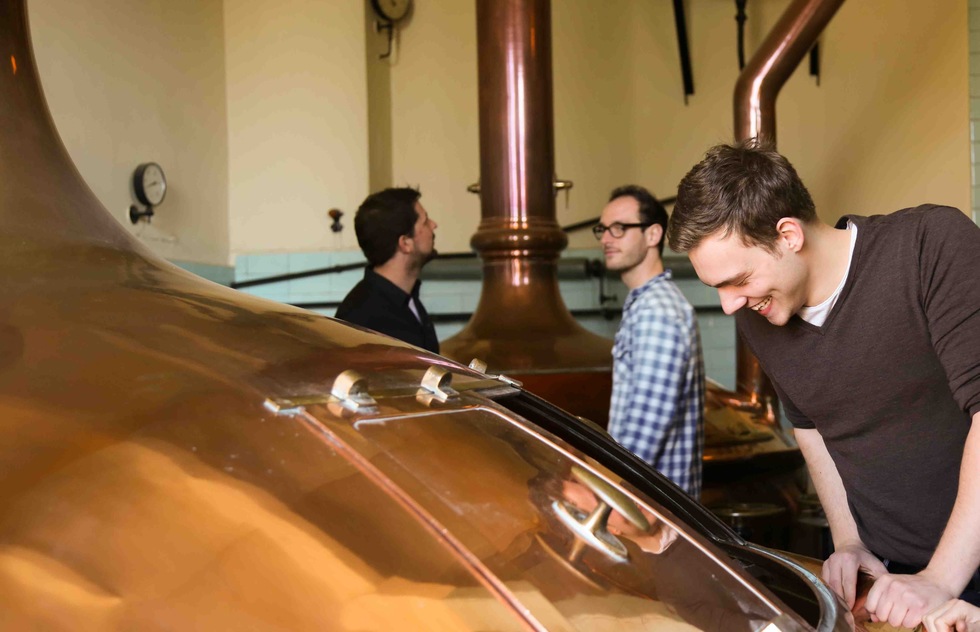 Brauerei Maisel
A World of Beer

Okay, back to booze. Franconians may excel at cultivating wine, but you shouldn’t get the idea that beer is hard to come by—this is still Germany, after all. In fact, the city of Bamberg (about midway between Würtzburg and Bayreuth) has been in the beer-brewing business since 1122 and has no fewer than 11 traditional breweries in a town of 75,000 people. Bamberg’s specialty is “smoked beer,” which gets its distinct flavor from malt that’s dried over a fire.

To qualify as Bavarian beer, a brew has to adhere to a 500-year-old “purity law” decreeing that the only ingredients can be water, hops, barley, and yeast (though the latter was added to the list later). To find out how those items can be combined to make any number of wheat beers, stouts, IPAs, and so on, visitors can take an exhaustive guided tour of Maisel’s Beer Adventure World (pictured above), located in a converted red-brick brewery in Bayreuth. Be warned: This is a tour (via audio guide for English speakers) for those who care deeply about hops and copper vats. If that’s not you, jump straight to the brewery's restaurant and sample the array of beers on tap instead. 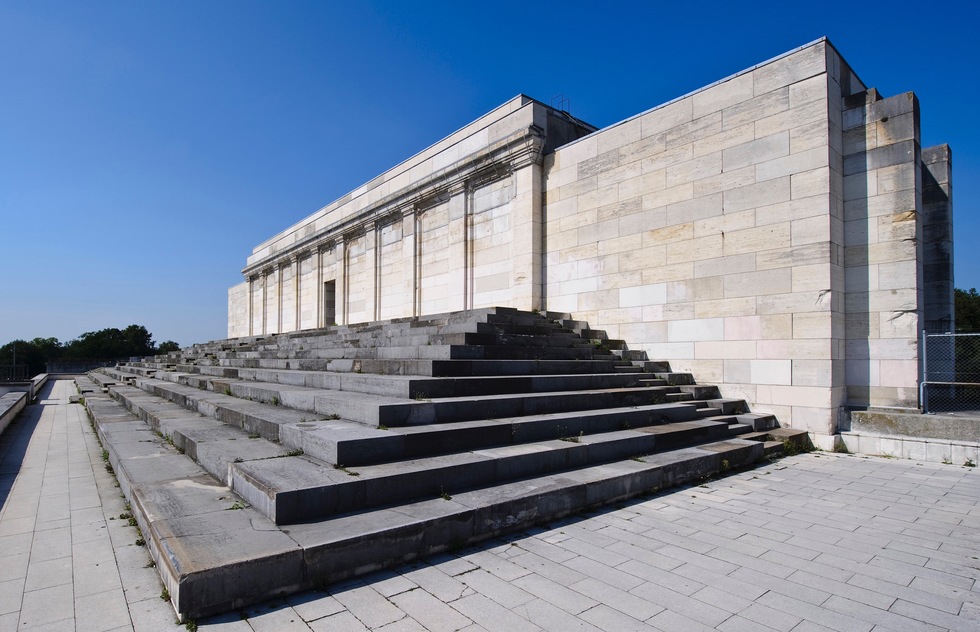 The skyline of Nuremberg (about an hour’s drive south of Bayreuth) is like a teenager with a convincing fake ID—it’s not as old as it looks. After the city was bombed to smithereens near the end of World War II, it was rebuilt in a medieval style that closely approximates Nuremberg’s glory days during the Holy Roman Empire. Today the city is perhaps best known for its connections to events bracketing WW2: the huge Nazi Party rallies held here before the war and the trials of Holocaust perpetrators afterwards.

A “documentation center” near the site of the rallies powerfully recounts the rise of Nazism and its devastating impact on Europe. Having acquired that context, visitors can then stand amid what remains of the hulking arenas and imposing stands (pictured above) where the Nazi faithful gathered in enormous numbers to listen to Hitler speak. Surreally, the property is used for car races and rock concerts today. To complete the circle, drop into the Nuremberg Palace of Justice, where Nazi leaders were put on trial for war crimes in a series of proceedings that started in 1946. Courtroom 600, where the first tribunal was held, is open to the public on days when court is not in session. 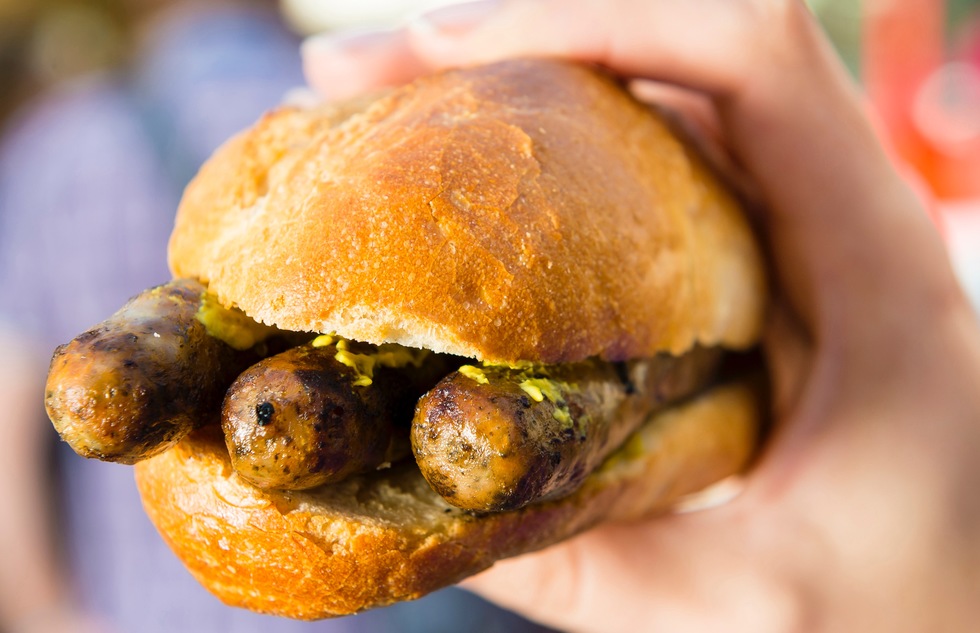 Nuremberg’s most renowned culinary creations are sausages and gingerbread. Precise rules govern the making of both: Sausages can be no longer than 9 cm (3.5 in) and no heavier than 23 grams (0.8 oz). Nuremberg gingerbread, which is much softer and cake-like than the man- or house-shaped varieties you might be envisioning, is always baked on a communion wafer and always has nuts.

Where to try these delicacies? Wursts are sold in traditional restaurants like Bratwurstglöcklein, which has been in business for more than 700 years (it’s now located in the touristy Handwerkerhof area). You can also get three sausages on a bun with mustard from street vendors. As for gingerbread, stop by Wicklein, a 400-year-old confectioner offering an array of traditional, chocolate-covered, and sugar-dusted gingerbread cookies as well as classes where you can make your own and learn about how Nuremberg’s position along spice trading routes made it the gingerbread juggernaut it became.